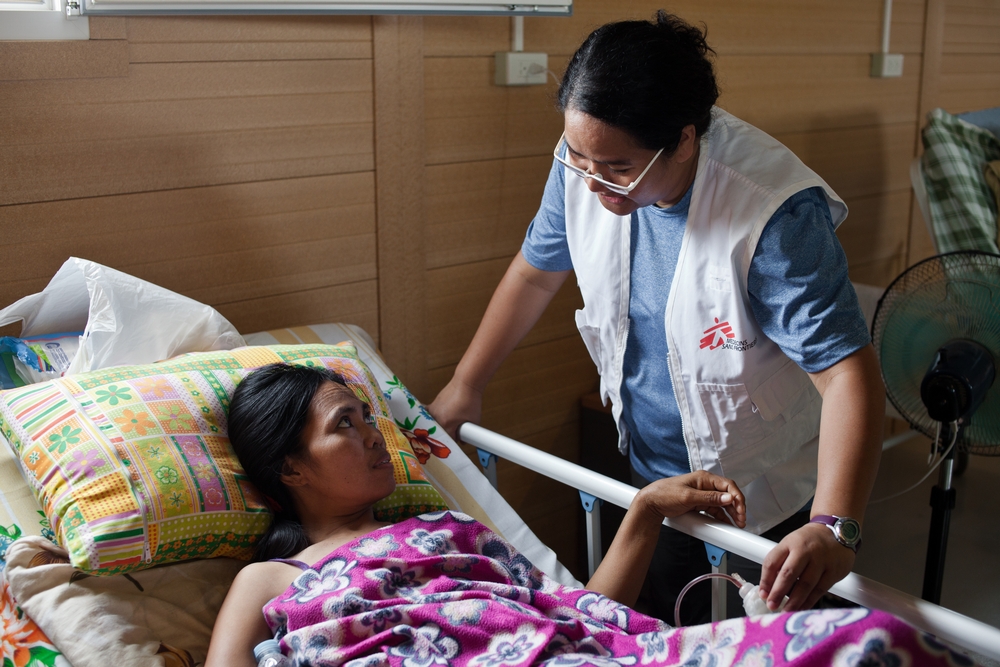 It has been nine months since Typhoon Haiyan struck the Philippines and MSF started its intervention in the country.

In Guiuan, where the typhoon first struck the low lying island chain, MSF has finished the construction of a semi-permanent hospital – the Transitional Felipe Abrigo Memorial Hospital - to replace the original of that name, which was smashed and flooded beyond repair.

MSF swiftly set up a tented hospital in the compound right after the typhoon to cover the urgent medical needs. It was run by MSF and provincial health staff, but it was always clear this could not last for long and a more solid construction was begun.

Upon the completion of the construction in late June, MSF facilitated the movement of patients to the new hospital which has been run by the Provincial Health Office since then.

A hand-over ceremony was held on 31 July, in which MSF donated full hospital equipment as well as drugs and medical supplies for six months to the local health authority.

“Construction started in March and has been completed in just a few months, with patients and provincial health staff transferred from the tented hospital.” says Radoslav Antonov, MSF’s project coordinator in Guiuan.

“We will continue to provide support here in the next few months, hoping to see this facility fully operational without MSF at the end of October.”

A small MSF team is helping with the water and electricity systems, building structure maintenance, stock and human resources management.

The hospital, which will act as an interim facility until a permanent structure is completed by the Department of Health in 2016, is made of an innovative durable and recyclable composite material (75% wood fiber and 25% polypropylene) - which can adapt well to the hot, humid climate..

Around 80 outpatient consultations are carried out every day at the hospital, most of which are for respiratory tract infections and vector-borne diseases like dengue.

The hospital admits 10 inpatients on an average day and the emergency room handles more than 400 cases per month, some of them from the wider region. These statistics indicate that services have returned to their pre-Haiyan level.

Ruel Navidad, father of newborn baby, Prince Wilmark, lives with his wife 60 km away from Guiuan. He was delighted with the result of their referral. “The facility and services here are very good. I am impressed by how my wife was immediately taken care of when we came here.”

Currently there are up to 8 deliveries in the transitional hospital every day.

Maternity ward in the transitional hospital in Guiuan. The hospital assists an average of eight deliveries per day. Image © Nacho Hernandez

“I was staying in a private hospital but as soon as I knew this hospital was opened I asked to be referred here,” she says.

“My house was destroyed by the typhoon and I’ve lost everything. It would cost me a fortune if I did the surgery in private hospital, but here the service is free.”

“Yolanda wiped out our health system and we hope to build it back even better than it was previously. It is an opportunity out of adversity.” says Dr. Paulyn Jean Ubial, the Assistant Secretary at the Department of Health during the hand-over ceremony.

Dr. Lilia Daguinod, the chief of hospital with 20 years of experience in public health care, has been working side by side with MSF in the tented hospital from the start.

She recalls, “Seven days after the typhoon, the MSF team came with materials and people to build the tented hospital, and ten days later I was working in the inflatable operating theatre there, doing up to 5 caesarean sections in a day. It was really hard for all medical staff and the population.”

One of those who was with her then is MSF’s Dr. Natasha Reyes.

“We know the tented hospital is not the best place to provide healthcare: it’s dusty, hot, wet, and cannot resist another storm. The transitional hospital is finished just on time before the next typhoon season comes, providing better working conditions for the staff and allowing easier care for patients.”