Providing physiotherapy for the war-wounded in Ukraine

Huge numbers of people have suffered severe injuries during the war in Ukraine and face a serious risk of major long-term consequences due to a lack of rehabilitation skills and capacity in the healthcare system. Without adequate, early post-surgical treatment, their recovery may remain incomplete or take much longer than necessary, affecting their lives and weighing on an overburdened system.

At the Kyiv Medical Centre taxis and cars arrive bringing people with crutches who cautiously walk to the hospital trying not to slip on the wet asphalt. Many have had a leg amputated, up to the knee or higher. These are war-wounded patients, learning to live in new realities.

Following the Russian invasion in February, the Ukrainian health system faces a major challenge in the post-operative recovery and rehabilitation of patients who have been injured in a war marked by brutal and intense fighting. Fragments of shells tear off patients' limbs, wounds that aren’t treated quickly become infected, and limbs have to be amputated to save people’s lives. According to the Ukrainian Ministry of Health, the need for physiotherapists has doubled since the war started. 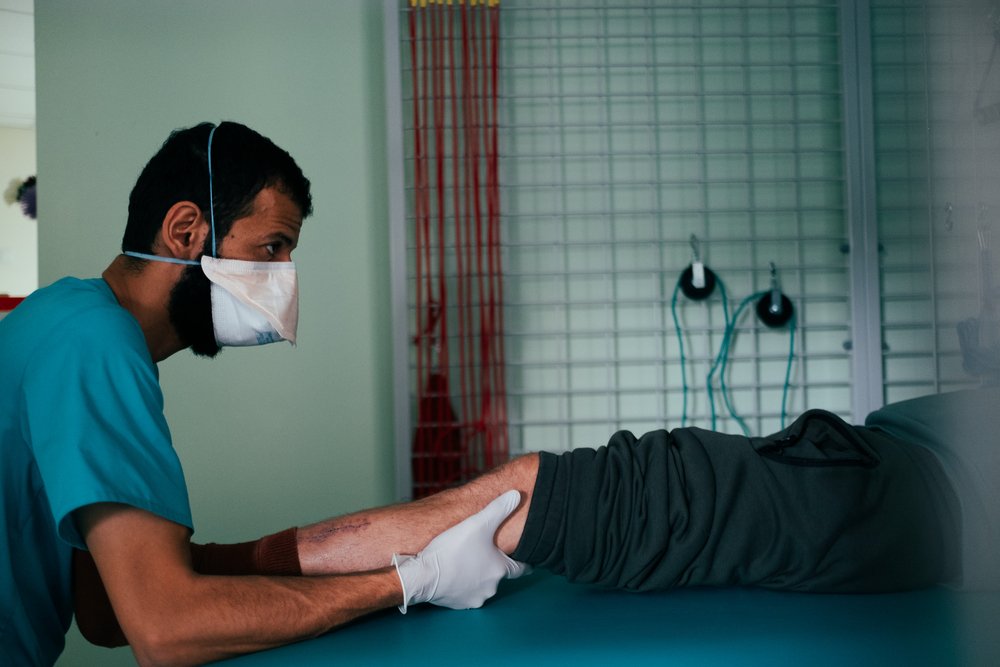 The Ukrainian healthcare system doesn't have enough skills and capacity to sufficiently meet such huge needs, partly because of the mere scale of the issue, partly because it hasn’t traditionally been an area of focus of the system. In Vinnytsia and Kyiv, MSF teams provide rehabilitative healthcare to war-wounded patients, assessing people’s injuries and providing treatment, assistive devices and physiotherapy, as well as individual psychological or psychiatric treatment to support patients in overcoming both physical and mental health issues.

“We see dozens of patients who have lost their limbs – their legs, their arms. Sometimes more than one. Our staff from other countries have good experience in treating war-wounded people. We do this in close collaboration with Ukrainian colleagues. So, we can learn from each other, building local capacity to face the increased needs for rehabilitative healthcare,” says MSF medical coordinator Tankred Stoebe.

MSF physiotherapist Ahmad Alrosan arrived in Ukraine from Jordan, where he works in an MSF hospital that offers rehabilitation for trauma patients from Iraq, Yemen, Syria and Gaza. He has a vast experience in treating patients who lost their limbs due to war-related injuries. Among his patients is Renat, a 29-year-old man who lost a finger and an eye after a mine detonation and fragmentation grenade explosion in Mariupol Donetsk region. Under Ahmad’s supervision, Renat practices clenching and unclenching his fist to stretch his hand muscles. 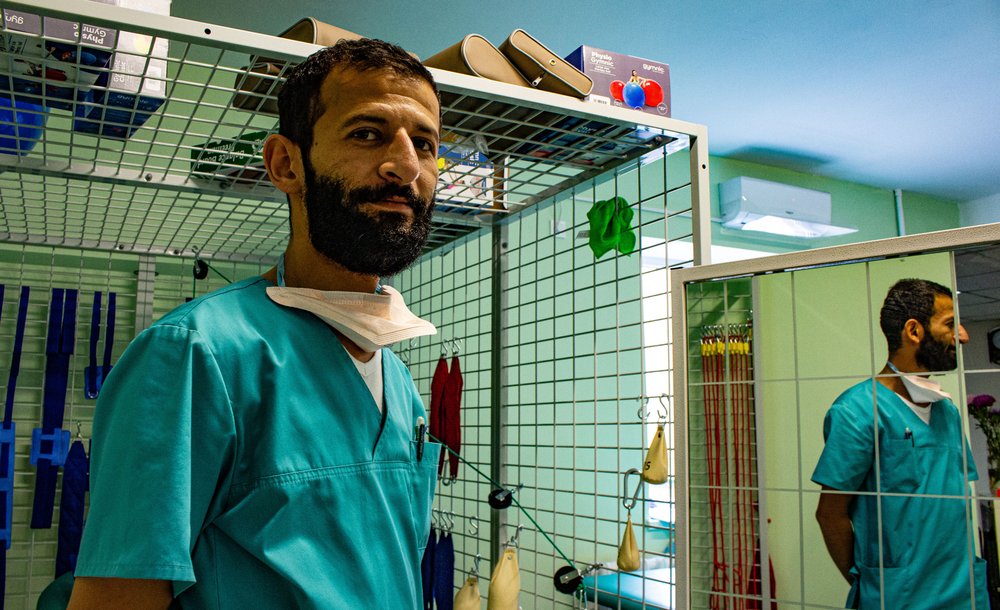 “He lost an eye, the fingers of his both hands are mutilated” says Ahmad. “He has injuries all over his body, a broken wrist. He has had three surgeries already, two more ahead to remove the lingering shrapnel.”

Renat is visibly coping with pain while being massaged by Ahmed. His injury is six months old already but he had no access to early rehabilitative treatment, which is why he needs more vigorous physiotherapy now. It takes time and patience. Ahmed grasps Renat’s fist and asks him to unclench it, countering the pressure he applies.

“My fingers did not function, they were stiff. Now I can perform common actions the same as you or anyone else. I can hold a pen or take a cup,”

Elsewhere in the hospital, Elise, another MSF physiotherapist, meets Vasyl, 30, and walks him down the corridor to the physiotherapy room. Vasyl is learning to live without his left leg, which was amputated just above the knee.

“I stepped on a mine during demining works in the village of Novyi Bukiv, in Chernihiv Region. The village was under Russian control for over a month and a lot of landmines were planted. We had to clear them so the locals could come back to their homes. The metal detector missed a mine on the curb. It was a pressure operated, anti-personnel mine. I lost my leg immediately. The explosion was so powerful that one of my sneakers just burned to ashes.” 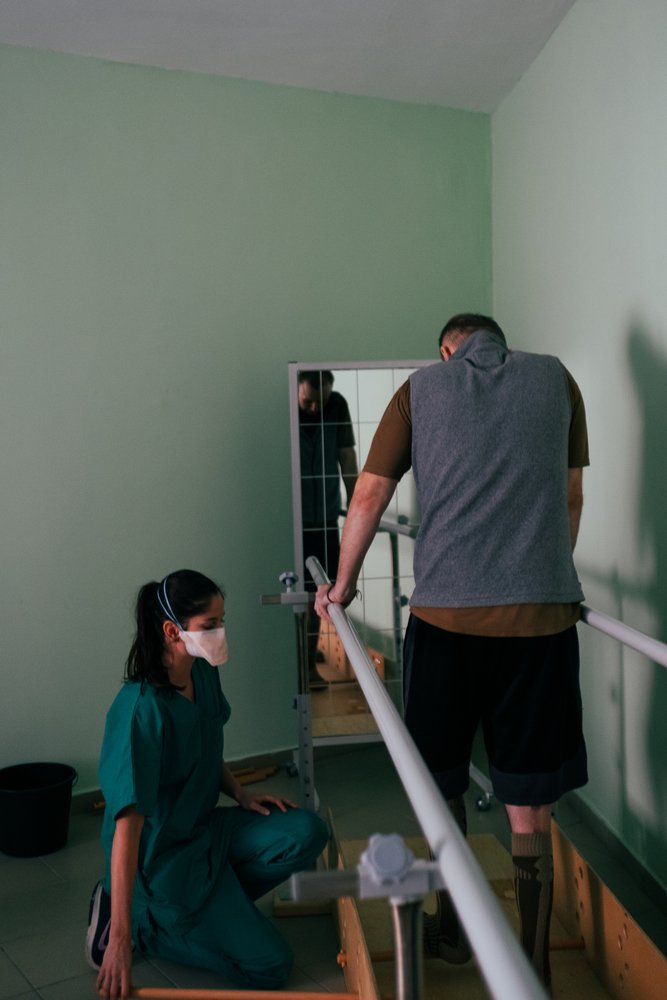 Elise massages the injured leg of the patient and helps him to exercise his muscles. She also works on his surviving leg, which is connected to physiotherapeutic devices. Practicing his exercises in front of a mirror is very important for the patient, says Elise: seeing his healthy leg move in the mirror helps him to replicate the movement with his other leg and relieving phantom pain.

Learning to overcome difficulties and work with the skeleton and muscles is important, but patients will also need psychological support, MSF psychologists say. The mental health consequences of a war injury depend on the type of injury itself. Many will face fundamental changes to their lives: getting used to walking on crutches, learning to use prosthetic limbs or getting used to being bound to wheelchairs will take time and good coping mechanisms.

As many of the war wounded patients in Ukraine are young, they will live many years with disability. This will be a long-term issue for the Ukrainian health system and for the people who require physiotherapy and post operative care. Given the brutality of this war, MSF physiotherapists like Ahmed and Elise wonder how many more people will be injured and will require similar care in the future.