Eliminating stigma around mental health is crucial for helping internally displaced people in the Sulaymaniyah area to recover from the decades of violence they have witnessed.

“MSF started working in Sulaymaniyah in 2015 when a huge influx of people escaping violence in their towns and cities arrived in the area,” Carla Brooijmans, MSF’s Head of Mission in Iraq, said.

Reducing the stigma of mental health

“One woman who accessed our services said she was initially afraid to see us because her neighbour would call her crazy. MSF tried to reduce this stigma by going tent-to-tent and organizing education sessions to inform the community about mental health problems and why it was important to receive treatment.”

“We identified mental health as a key need as many internally displaced people had witnessed very traumatic events and needed support. There was also a stigma attached to mental health, which meant many people felt embarrassed seeking help.”
Carla Brooijmans MSF’s Head of Mission in Iraq​

“Although some people were still cautious about receiving treatment, we did see a change in attitudes. This allowed us to provide quality treatment for the people in need through individual counselling, group and family sessions.”

MSF has been working in Sulaymaniyah for the past two years. The organisation initially provided water and sanitation services in Arbat camp for displaced people, then expanded the project to provide mental health services in Ashti camp and support for the Sulaymaniyah Emergency Hospital.

“When we assessed the healthcare needs in the Sulaymaniyah region, we realized the only emergency trauma hospital in Sulaymaniyah was really struggling with the sharp increase of internally displaced people coming through the door. They went from admitting 400 patients per day to 800 per day,” Ms Brooijmans said.

“At the Sulaymaniyah Emergency Hospital, we concentrated on building the capacity of staff and bringing the hospital in line with international procedures and standards. We also totally refurbished both the Emergency Room (ER) and the Intensive Care Unit (ICU), and there’s now a vast difference in facilities,” Ms Brooijmans said.

MSF finished the project in Sulaymaniyah at the end of November 2017. In the camp, the number of households has decreased to around 2,500 as more people return home. MSF worked closely with the camp management to handover the mental health activities to local organisations who will continue to work in the camp. At the hospital, MSF completed the objectives of the project to train staff and renovate the ER and ICU.

MSF currently works across Iraq in the governorates of Erbil, Diyala, Ninawa, Kirkuk, Salaheddin, Anbar and Baghdad. MSF is still committed to assessing the situation in other areas in Iraq and will set up new projects where the needs are greatest.

MSF offers neutral and impartial medical assistance regardless of race, religion, gender or political affiliation. To ensure its independence, MSF does not accept funding from any government or international agency for its programs in Iraq, relying solely on private donations from the general public around the world.

Nawar* lives in a camp for internally displaced people near the city of Sulaymaniyah in northern Iraq. Her face lights up when she describes the beauty of her home, but the light soon fades as she remembers what happened to her family. Nawar has been in the camp for four years. She received support from a Médecins Sans Frontières / Doctors Without Borders (MSF) psychologist to recover from depression. This is her story: 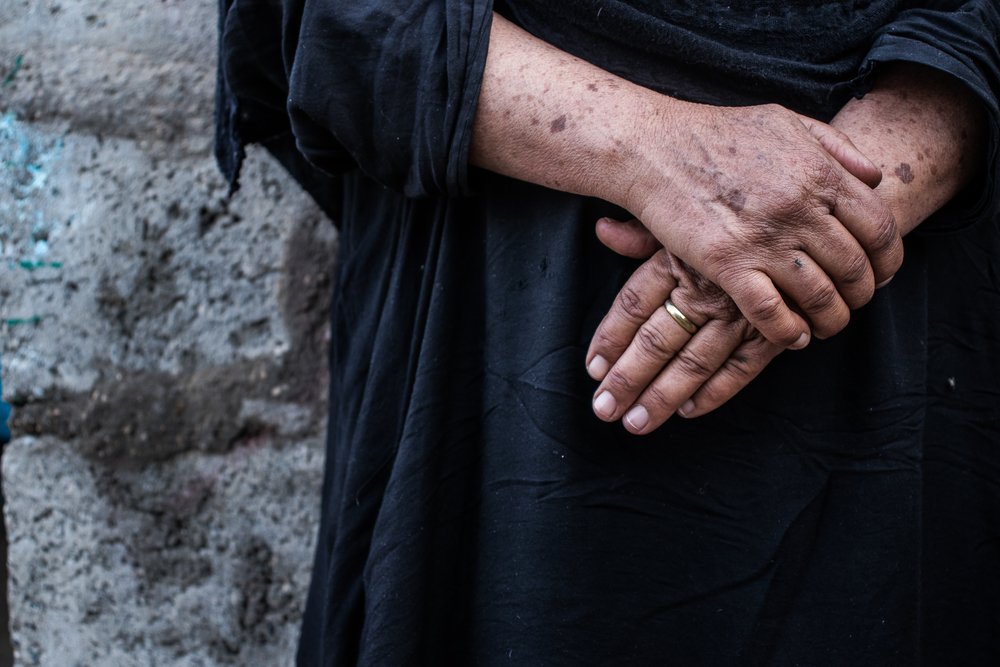 Nawar* was one of many displaced people who needed help when she arrived in Ashti camp, on the outskirts of Sulaymaniyah.

My name is Nawar and I'm 54 years old. My son, his wife and three children live here. And my other son and his wife and their five children. And my third son is here as well.  There was conflict near our home between the Iraqi army and IS (Islamic State) and we were afraid. IS didn't allow us to sleep because they were shooting all night.

In the conflict, we lost everything. Our houses, everything. Before IS, we lived in heaven we had a wonderful life. We never even got sick. Then we became displaced people and left our home. It’s been four years since we left.
While we’ve been in the camp, we haven't been hungry. All the organisations visit us and help us. But we became depressed here because we lost everything. We used to have farms, cars, houses. But they were taken from us. They entered our house and took everything and then they destroyed it as well.
It was like heaven, it was such a beautiful place. But eventually we were sacred and we ran away. When we left our home, it was humiliating for us. We left in boats and some children fell in the water and died. The journey took us five days without eating food. We received a warm welcome in the camp and we are comfortable. But no one can say we are happy because we're not living amongst the trees we planted and the bees we raised.

I was depressed and sad because I missed my relatives, especially my cousins. Three of my cousins were killed, one of them was a judge. He lived in Erbil and later he decided to come back home with his family. An armed group caught him and they killed all three of them.
Nawar

I asked people about MSF and they told me where I could find them. I visited MSF and they gave me an appointment. I visited several times a week and I explained to the psychologist about the problems I suffered from. I said I was depressed here and found it difficult to breathe. They recommended for me to visit my neighbours and to get out of the house. I recovered from my breathing problems. I also suffered from bad dreams and the psychologist gave me activities to help.

Thirty-five-year-old Amir* has spent three years living in a camp for internally displaced people near the city of Sulaymaniyah in northern Iraq. Amir and his family fled their home in Salaheddin when the Islamic State group surrounded their town and cut off their food supplies. He suffers from a long history of anxiety and insomnia and has received support from a Médecins Sans Frontières / Doctors Without Borders (MSF) psychologist in the camp where he lives. 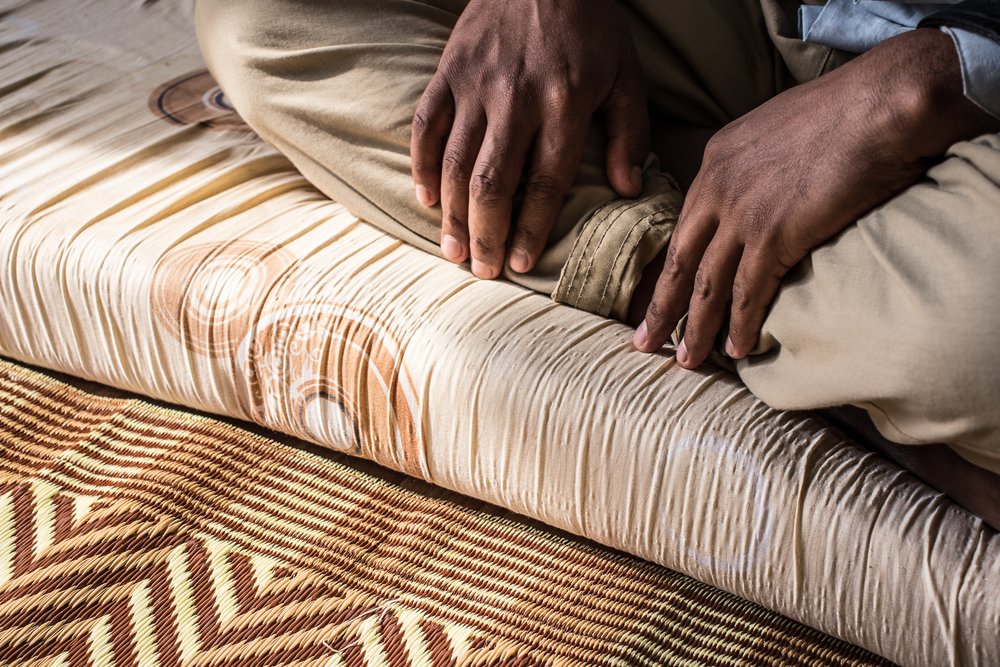 My name is Amir* and I’m 35 years old. I’m from Salaheddin. I have nine children aged three to 15 years old.

We left our homes and came here because of IS (Islamic State group). IS entered our town and surrounded us so we couldn't receive food. Our situation became very bad.

I had lived all my life in Salaheddin. We were farmers and we had animals and our children used to go to school. Our life was stable and we were happy until IS came. Then there was no security.

We travelled from place to place until we arrived in Sulaymaniyah. Thank God we became comfortable here and it is a good situation. Also, many organizations have visited us.

We’ve been in the camp for three years. I was 32 years old when we arrived.

I am a construction worker now and I work outside the camp. We live in a tent. The only problem is the economic situation. Sometimes we don't have enough food. Some days there is no work in construction. But security is fine here and we found safety. Our children go to school here, thankfully.

I found out about MSF when I read about it and some of MSF employees visited the tents in the camp. They helped us in a good way.

I overthink things, become anxious and I can’t sleep. I stay awake the whole night. I stay sitting in one place until the morning. As a result, I get sick. In the past, I had pain in my stomach and chest. I visited doctors and they weren't helpful. But when I visited mental health doctors it was very useful for me.

Right now, I visit MSF and it is very helpful for me. Thank you to [the MSF psychologist]. He gave me instructions for activities to do and they really helped. He encouraged me to make sure I leave the tent each day and to make social visits with people I know, to play sport and to avoid staying alone at home. He also recommends for me to keep busy and not to sit at home.

Right now, I don't know what will happen in the future. I just want to go back home and have a stable life again. But our house was destroyed.

People are returning home slowly but people who returned don’t feel safe, yet. During IS there were risks and I'm still not sure about the safety of our hometown.

find out more about msf's work on mental health >