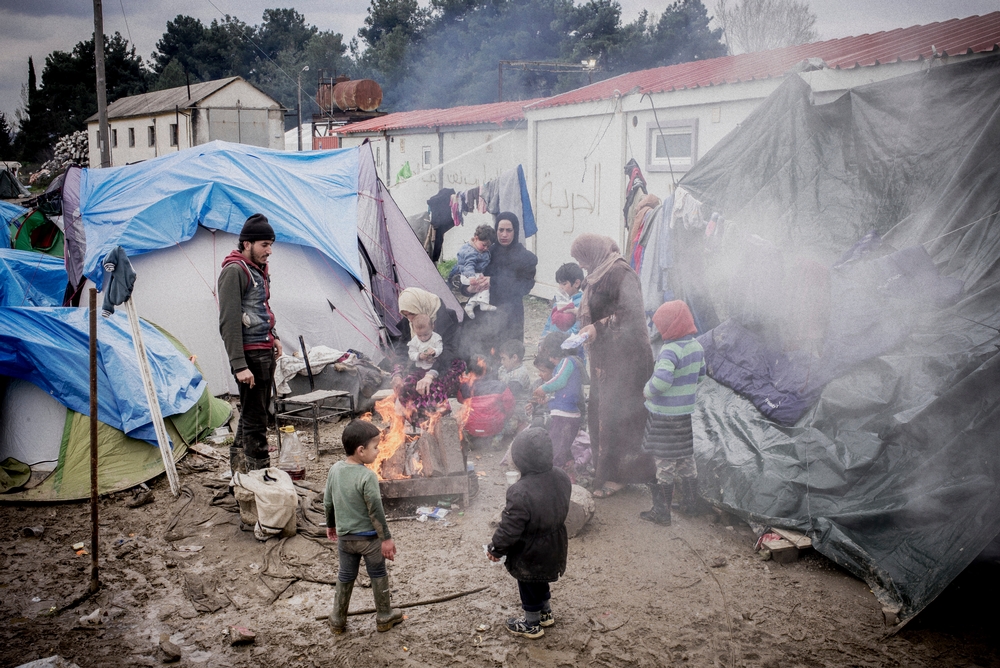 Doctor Conor Kenny was working with Médecins Sans Frontières (MSF) at the Idomeni border-crossing between Greece and the Former Yugoslav Republic of Macedonia on Sunday, 10 April.

"It was a beautiful, calm, Sunday morning when I met my team at 9AM. Our plan was to work in the MSF mobile medical clinic; to assist refugees and migrants who are staying at a distance from the main Idomeni site.

However, just before lunch, we were requested to attend Idomeni camp to help the rest of the medical team respond to the large number of injuries following altercations at the border and alleged violence by FYROM police.

Idomeni camp is situated in a vast terrain of flat agricultural land, divided in two by a barbed-wire, steel border fence. A number of tents back on to this fence and the majority of the camp extends away from this point.

We left the MSF jeep near the train station, close to the MSF clinic. As we approached the camp, I saw what I assumed to be tear gas in the distance. I heard loud explosions or banging sounds and worried that this was the sound of blast bombs, rubber bullets or tear gas being fired.

Walking closer to the camp, the first thing I noticed was the number of families who had gathered - approximately 100 meters from the border fence. Many women and children were in tears and consoling each other.

Amongst our patients at #Idomeni today were 3 kids under 10 with plastic bullet wounds to the head. pic.twitter.com/RDP0VN3CWC

Furthermore, there appeared to be a number of unaccompanied children among them – presumably separated from their parents during the violent events. Walking on, I then observed people distributing toothpaste and crafting facemasks from it, in an attempt to protect themselves from the teargas.

Many others poured cans of coke onto cloth and placed it over their faces in order to protect themselves. The scenes were chaotic, with many individuals receiving treatment from one another in tents or at the side of the road.

As I reached the clinic, the MSF team was working hard to treat people affected by the teargas attack. It was not long before another attack began. From where I was positioned near the door of the clinic, I heard a number of large blasts, followed by screams - which got louder as people approached the MSF clinic.

What sticks in my mind was the large number of women and children, many of whom were carrying some of their belongings. They were in significant distress, attempting to find the clinic but unable to see where they were going.

We started triage and assessment for injuries – the majority were facial, related to teargas, with many young children’s lungs having become inflamed.

Many people: men, women and children were also carried into the clinic on blankets that had been used as makeshift stretchers, as they were unable to mobilise themselves due to lower leg injuries or as a result of psychological shock.

After examining those with non-teargas injuries, I found evidence of well defined, non-penetrating blunt trauma – presumably due to plastic bullets. A number of these injuries were located on the back, indicating that the person was likely walking or running away from the source.

A number of such injuries were also to the chest as well as to the head. In particular, I remember one of the three children who were shot in the head wandering around in a dazed state, with the plastic bullet in his hand. His mother said he had been unconscious for at least 5 minutes. He was transferred to hospital for further imaging, along with a number of others who sustained fractures through the course of the day.

We prepared for further incidents

The team regrouped and we prepared for further incidents.

Again we were not waiting long.

More screams as people ran from the border fence. I stepped outside the MSF clinic to assess the situation and to my right I noticed some white smoke billowing from an object bouncing on the roof of one of the large white tents that sheltered refugees. It then bounced onto a pathway running through the camp, engulfing the entire area. In a panic, people started to flee their tents.

Pregnant woman, caught in the stampede

Within seconds the white smoke - tear gas - entered the now-packed clinic, with everyone inside bending over almost instantly and simultaneously to protect their faces. My eyes were quite irritated and I managed to grab a water bottle to wash my face and eyes. The air was suffocating and I struggled to continue my work to assess and treat patients.

Again, many people were in distress and crying. A few were screaming; “we have done nothing wrong”. During my assessments, I came across a pregnant woman, caught in the stampede. She was concerned she had lost her child. She, like many others, had been certain that “the border would be open today”.

This article originally appeared on the Irish Times' website.

Read more about MSF's work in the European refugee crisis