Responding in the aftermath of the Pakistan floods

It has been seven weeks since the flood emergency was declared by the Government of Pakistan, calling on the international community for support. The heavy monsoon rains that started in June have inundated more than one third of Pakistan, with the death toll now over 1,700. It is thought that over 33 million people have been affected. 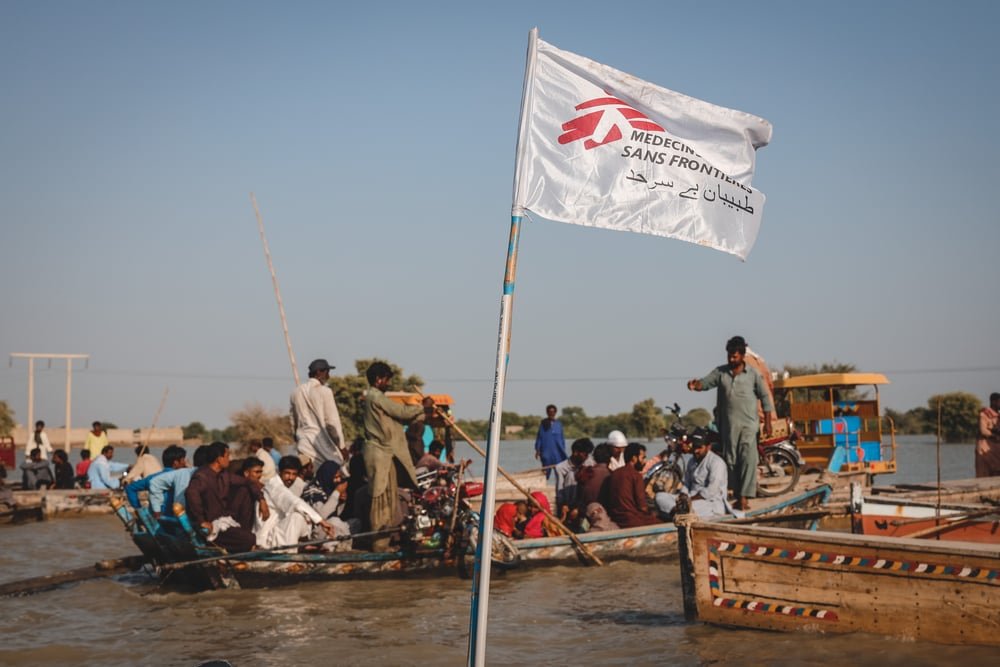 Boats waiting to take villagers across the flood waters to Dadu city or other villages.

The record-breaking heavy monsoon rains have caused catastrophic devastation in the country leading to an ongoing large-scale humanitarian crisis. From hilly areas to plains, the flooding has inundated all four provinces of Pakistan and washed away houses, infrastructure, crops and livestock. Our teams have seen villages near the riverbanks flooded up to 3.5 metres deep. Rainfall significantly reduced in September and October and the water level on the plains is now slowly receding, but many of the villages are still flooded and most of the displaced people cannot return to their homes. Many are spending days and nights in tent camps, in temporary facilities or in the open air without adequate shelter. Large areas of Sindh and eastern Balochistan are still flooded and some villages remain cut-off from outside help. The floodwaters are stagnant in many areas causing water-borne and vector-borne diseases to spread.

The need for clean drinking water is still very high, as water sources are largely contaminated. The food security and malnutrition situation is also of concern as crops and livestock have been destroyed and many households are left with limited resources. With harsh winter conditions forecast, flood-affected populations will be particularly vulnerable in the coming months. 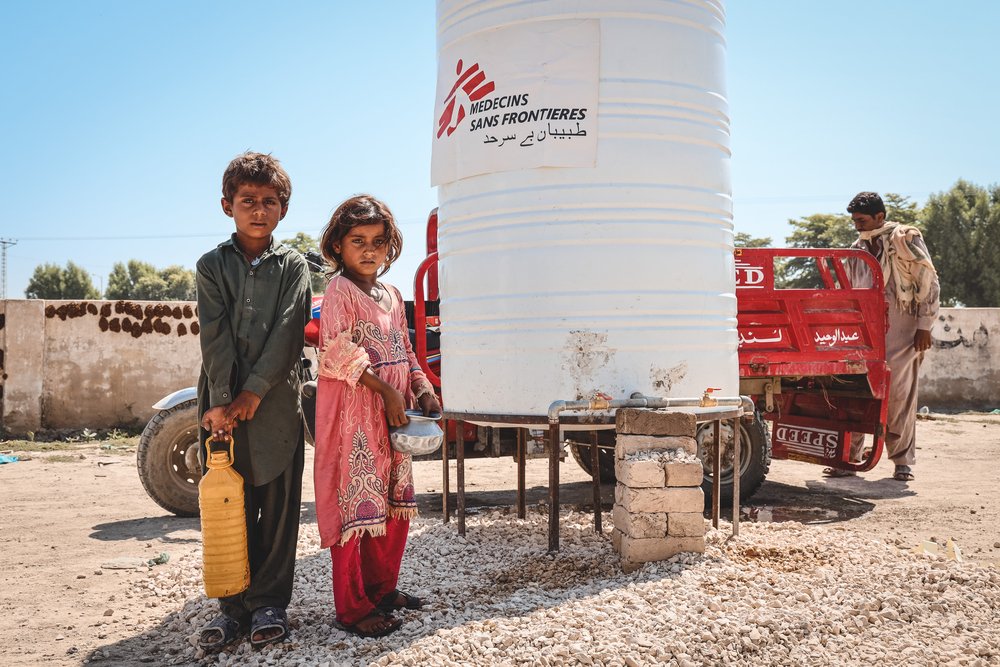 The response so far – in numbers

*The numbers mentioned are as of October 10th 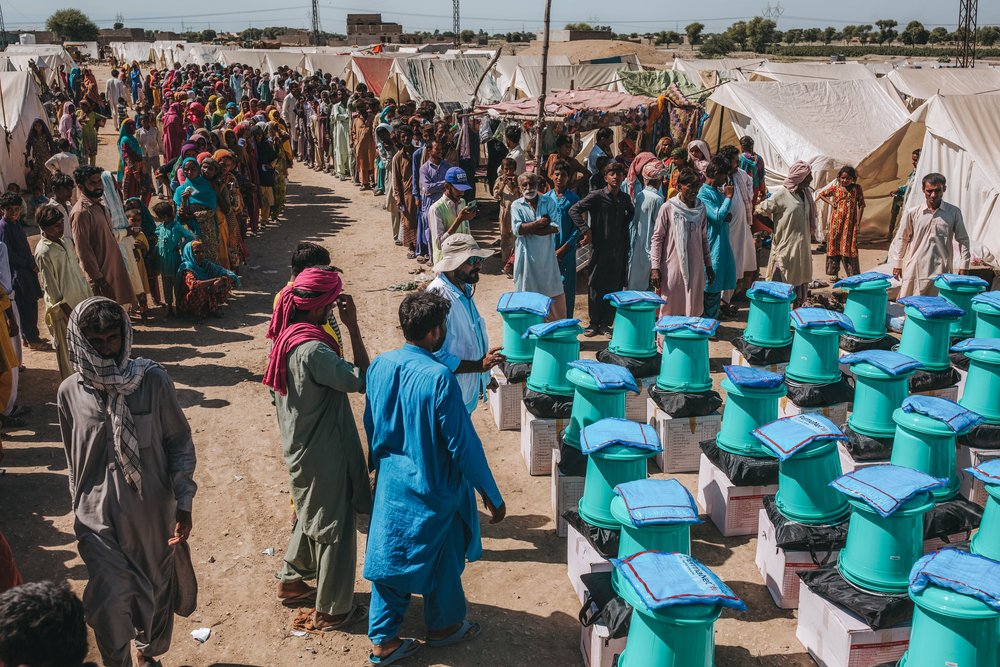 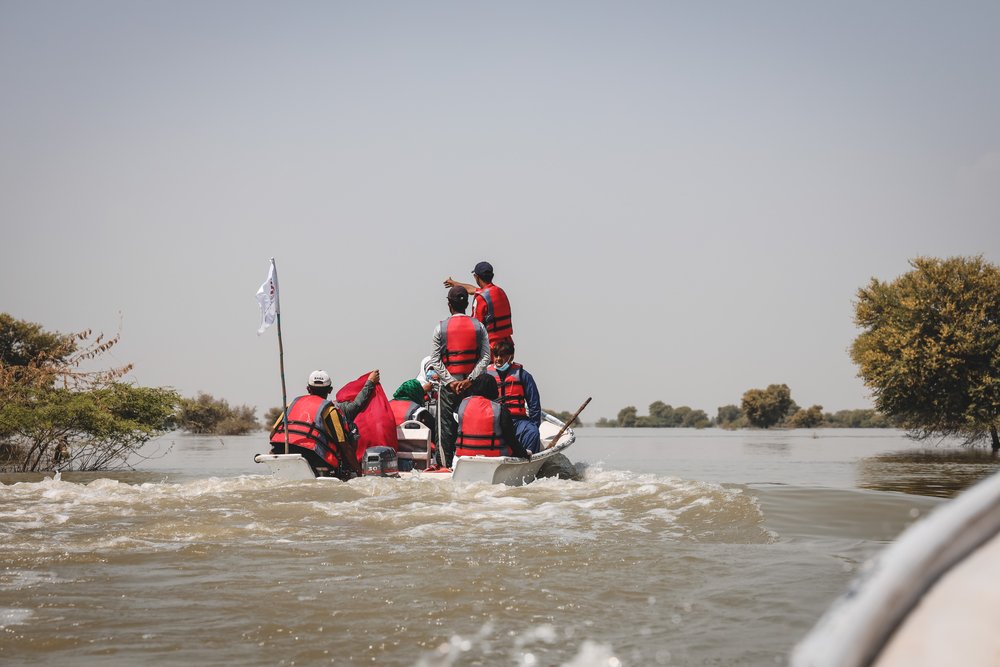 In the worst flood-hit province of Sindh, humanitarian needs are still massive seven weeks after the start of the emergency. While the water level has started to recede, most of the people displaced by the floods are still living in camps and temporary shelters with limited access to basic necessities. Some villages are still out of reach due to inaccessible roads and high water levels.

The water and sanitation needs in the affected areas are still enormous and we can expect this situation to last for weeks or months, with mounting concerns over the impact on people’s health. Access to remote inundated areas continues to be a challenge for MSF and other humanitarian organisations on the ground. 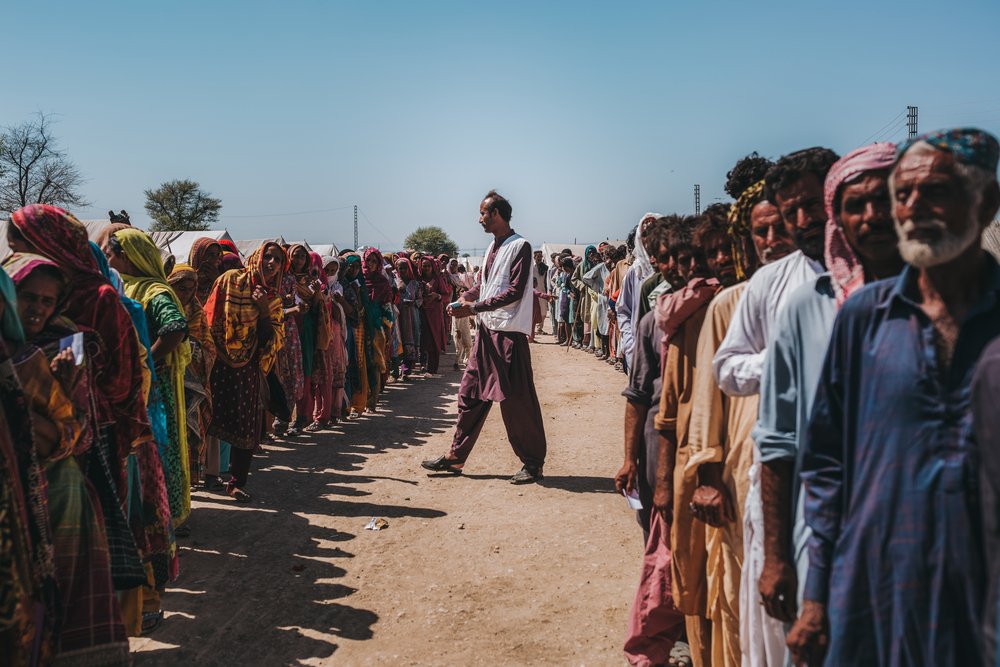 MSF/Asim Hafeez
An MSF staff member organizing the queuing of displaced people as they wait to receive the non-food items distributed by MSF, Dadu district, Sindh

MSF emergency teams are running two mobile clinics that visit 15 different locations in the Dadu district of Sindh, and have so far provided basic medical care to over 8,000 people mainly with skin diseases, malaria, and diarrhoea. Using boats, our teams are still assessing the medical needs in nearby remote villages that have been cut off by the floodwater. Teams have also been providing over 150,000 litres of clean drinking water per day to people taking shelter at different camps in Dadu district. Twelve water trucks are being arranged to reach the wider population. Our teams have rehabilitated damaged water points and set up 120 showers and 120 latrines in the flood-affected camps in the district. 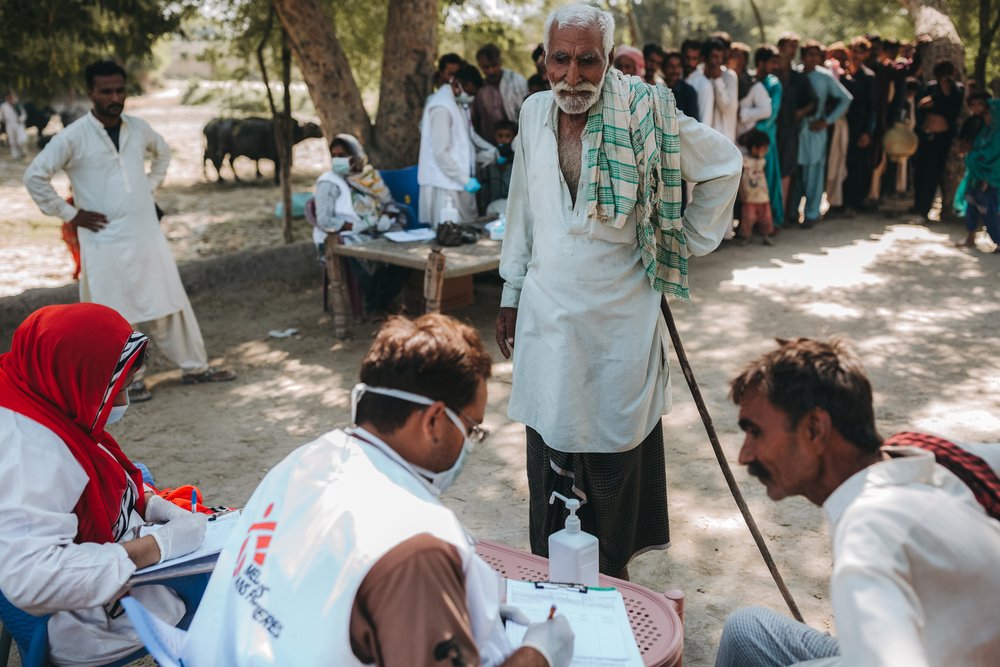 A patient with the MSF medical team during a mobile clinic in Alladad village, Dadu district, Sindh

In the north of Sindh province, teams are providing medical consultations and clean drinking water in Garhi Khairo and are running mobile clinics in Thul, Jacobabad district and in the district of Shahdadkot. We have provided 1,300 outpatient consultations during three days after starting in north Sindh, treating patients with malaria and malnutrition. MSF’s water and sanitation teams have installed 13 tanks and are providing clean drinking water in the displaced people camps in Sukkur city, North Sindh. We have installed water tanks with a capacity of 24,000 litres, which are being refilled on a daily basis. Over 40,000 litres of drinking water are provided daily to displaced people taking shelter in Labour Colony flats and Lab-e-Mehran camp in Sukkur district. Over 12,300 litres of clean drinking water are also provided daily to flood-affected families Ghari Khairu town in Jacobabad district, in total 1,238,000 litres of drinking water is provided to the flood affected population in North Sindh. 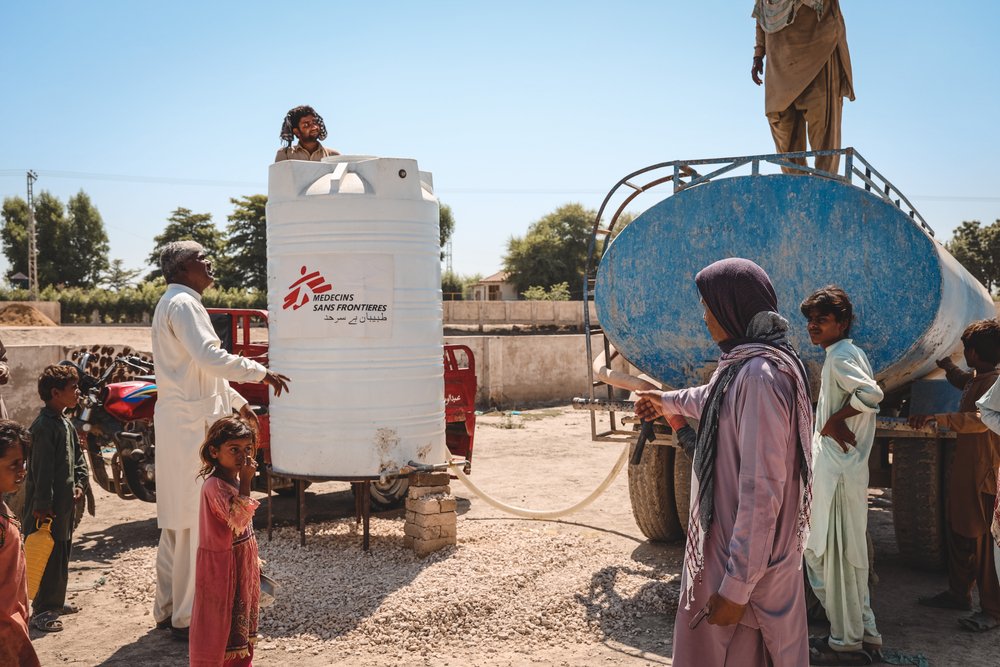 Zahra Shoukat/MSF
An MSF water truck being used to refill the water tank in a displaced person's camp in Dadu district, Sindh.

In eastern Balochistan where MSF teams are intervening, villages are still under water and it will take a lot of time for the water to completely recede. Displaced people are living in tents and temporary makeshift shelters. In some villages the water is receding and displaced people from a few camps are returning. The need for clean drinking water remains critical due to widespread contamination of water sources. We are seeing an increase in water-borne and vector borne diseases, especially malaria, watery diarrhoea, skin infections and malnutrition. Our teams are running four mobile clinics with outpatient consultations in Jaffarabad, Sohbatpur and Naseerabad districts. To-date, 10,165 people have received medical care from our teams on the ground. In eastern Balochistan, MSF is providing safe drinking water to the flood-affected population and more than 3 million litres have been supplied so far. In Dera Murad Jamali (DMJ), teams are supporting hospital activities including medical care for birthing women, and treating patients who require hospitalisation. Hospital admissions have nearly doubled in comparison to the months before the flooding. 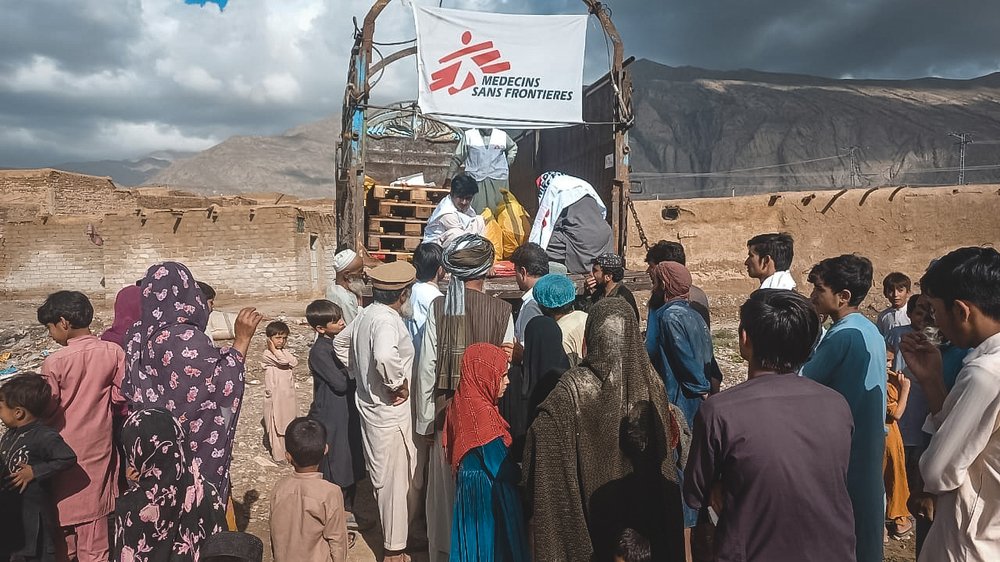 MSF
In Quetta, the MSF team has started the initial response for the flood-affected people. The team are distributing the relief items (soaps, jerry cans, mosquito nets) among the displaced families taking shelter in the outskirts of Quetta, Balochistan.

In western Balochistan, our teams also providing medical care in the aftermath of the floods. In Chaman, over 734 people have had medical consultations and in Quetta, over 1,753 outpatient consultations have been provided. Most of these patients have respiratory infections or acute watery diarrhoea (AWD). In Quetta, 14 water tanks have been installed and 45,000 litres of clean drinking water are supplied on a daily basis to the affected areas. Over 640 relief kits including hygiene items, kitchen tools and mosquito nets have also been distributed to the affected families. 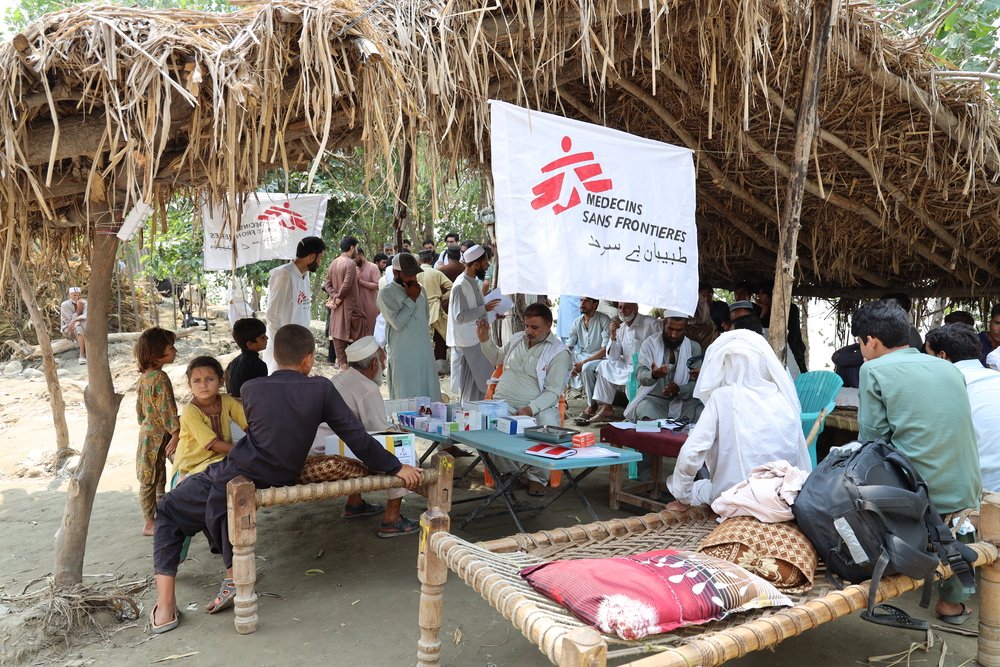 MSF set up a mobile clinic for the flood-affected community in Miaonlay village (Charsadda), in response to the floods in Pakistan.

In the Charsadda and Nowshera districts where MSF teams are intervening, the water has receded, families are returning to their home or staying with relatives, starting to rebuild their damaged houses. However, the water sources in the flood-hit districts, including Charsadda and Nowshera, remain contaminated and are contributing to water-borne diseases in the area. Our water and sanitation teams have started cleaning and repairing water facilities to tackle the source of the main medical concerns.

In Charsadda district, MSF is running four mobile clinics. Our medical teams have seen 3,833 patients with respiratory tract infections, eye infections, acute diarrhoea, severe skin infections and chronic diseases. 2,632 relief kits including kitchen sets, hygiene items and mosquito nets were distributed among the affected families. Water storage tanks, water pumps and filtration systems are being installed by our teams in the villages so that people can access clean drinking water. Our teams have also started cleaning 1,500 wells in the district.

In Nowshera, teams have started running a mobile clinic and are providing outpatient consultations. Our teams have provided basic healthcare to 504 patients with water-borne diseases, acute diarrhoea, skin infections and malaria. Our teams have also distributed 2,895 relief kits including kitchen sets, hygiene items and mosquito nets to the affected families. We have donated medical items to the hospital of Nowshera to support the isolation unit for dengue fever patients.

Our emergency response teams have identified high needs when it comes to accessing basic healthcare and the provision of safe drinking water in southern Punjab. MSF is looking into starting emergency response activities in different locations of Rajanpur and Dare Ghazi Khan (D.G.Khan), Punjab.