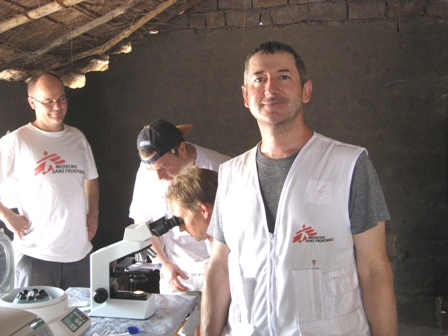 “At the risk of sounding like a cliché – I always wanted to be a bit of a rebel, but to be a rebel with a cause,” says John B. Fiddler, a Dublin-born nurse practitioner who has just completed his third mission working for medical aid agency, Médecins Sans Frontières/Doctors Without Borders (MSF).

John’s path to working for MSF wasn’t typical “I left Ireland in 1984 and moved to New York.  In the 1980s there was a lot of campaigning and activism around HIV/AIDS in New York; people were dropping dead from the disease.  In my early thirties, having worked in retail and as a bartender, I decided to pursue nursing as a career.   I felt I could make a difference, make a change.  Then, after I received my Master’s degree in nursing in 2004, I finally felt that I had the tools and knowledge to apply to MSF and fulfill a dream to push my boundaries and literally ‘do good’.  Plus I had a bit of French from school which I suspected could prove useful.”

For his first mission, John was matched to a primary health care programme in Burundi an experience he describes as “incredible, and the beginning of something special.”   However it’s a patient from his second mission, who particularly made an impact,“When I was in Chad I met a woman who had leprosy.  Her toes and fingers were gone, her face was beatific.  She had walked for hours in pain to come to our clinic.  We were able to give her medication and nutritional supplements.  She was humble, beautiful and noble.  I will never forget her.”

John has just returned from his third mission in Central African Republic (CAR) a landlocked country just north of the equator.  “I had the luck to see an internal posting for a nurse needed to supervise a Sleeping Sickness screening project in an isolated area in the northwest of the country.  I offered my services – the next thing I know I’m in a remote hospital in CAR supervising the outpatient department and planning a screening campaign.”

Sleeping Sickness – officially known as Human African Trypanosomiasis – is a parasitic infection occurring in sub-Saharan Africa. It attacks the central nervous system causing severe neurological disorders and will lead to death if left untreated.   During the first stage the disease is relatively easy to treat, but the difficultly is in diagnosing it as symptoms such as fever and weakness are non-specific.  The second stage begins when the parasite invades the central nervous system and the infected person begins to show neurological symptoms such as poor coordination, convulsions and sleep disturbance.  At this stage, accurate diagnosis of the illness requires taking a sample of spinal fluid.

“The only way we could obtain an accurate diagnosis was to travel with a complete mobile laboratory and medical team across rivers and into the bush,” explains John.  “The preparation would start weeks before when we’d send out notices to the villages that we were coming.  Then we’d head out in a 3 car convoy after running through all the necessary checklists:  Do we have all the necessary supplies? needles, lancets? cotton wool? paracetamol? people?! Then we had to check the local security situation and maintain regular radio checks every 30 minutes during the drive, as this can sometimes be an insecure area with armed banditry.

Once at the village, we had to find a good spot to set up the lab, organize the testing, and motivate the population to participate. We did everything from centrifuging blood samples to examining under a microscope, all powered by the car engine and a small mobile generator. We performed lumbar punctures under sterile technique in the middle of grass huts and in mud-walled churches.  Our goal was to test every single person to get an accurate picture of the prevalence of the disease, and also to get a sense of the general health needs of the population.  We had to look for sick patients, negotiate with tribal chiefs or village elders, chase dogs away from the testing area, and then finish up in time to make it back to base before darkness and in accordance with our strict security guidelines.”

“The good news was that we actually found fewer cases than expected.  The previous teams had treated a large number of Sleeping Sickness patients at the hospital, which surely had a huge impact on regional prevalence.  But there are still a lot of needs in the area.  Malaria is rampant and there is a need for good basic health care and education.”

John plans to spend Christmas in New York but hopes to do another mission for MSF early next year. “Balancing living in New York, visiting family in Ireland and full-time nursing work with my desire for the freedom to leave on a mission with MSF is never easy; I’m still trying to get it right.  The things I miss most when I’m on mission are my friends and of course, butter.”

The MSF Ireland office in Dublin is very interested to hear from nurses and midwives who are interested in working in emergency medical aid across the world.  To date, over 50 Irish professionals have worked with MSF in places as diverse as Haiti, Sudan and Uzbekistan.  For anyone considering it, John offers this advice “The work is challenging and a transforming experience.  Don’t be scared of the part of you that wants a bit of excitement.  If you’re chosen by MSF, you have something to offer.”