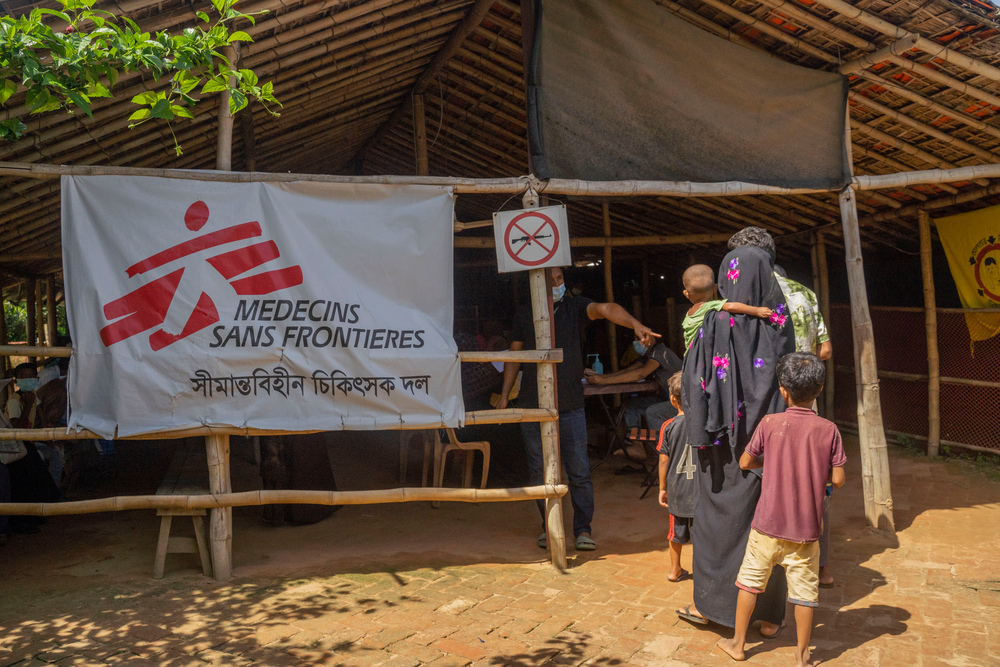 The Rohingya crisis: 5 years on

I have spent close to 30 years exposed to humanitarian crisis, wars, natural disasters, outbreaks of disease and large-scale displacements. And yet standing at our ‘hospital on the hill’ in the middle of what is now the world’s largest refugee camp, in Cox’s Bazar, Bangladesh, I was taken by the sheer scale of this makeshift setting. Organised chaos, a jumble of humanity packed together, precarious bamboo and plastic shelters constructed as quickly as the forest was cut down. Some semblance of order now carved in pathways and drains across the hill tops, all contained within kilometre after kilometre of razor wire fencing. 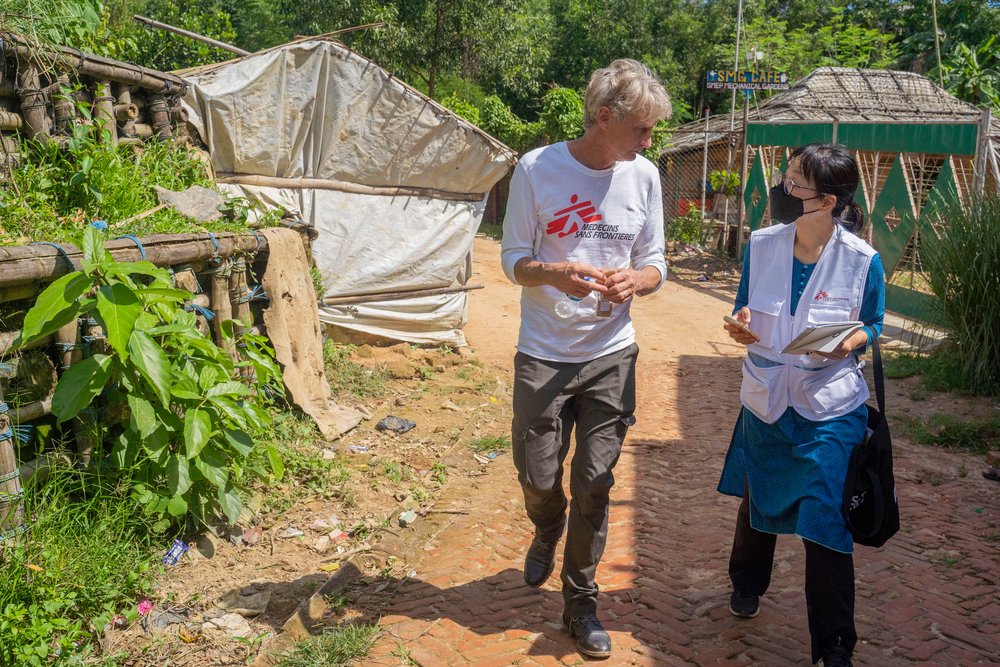 As we find ourselves marking five years since the brutal campaign of violence meted out at the hands of the Myanmar military, where at least 6,700 men, women and children were violently killed and over 700,000 Rohingya fled to Bangladesh, the future remains sadly bleak and hope in short supply. As one mother of six put it to MSF “The military were brutally killing Rohingya and burning their houses… now, we live here in the refugee camps. It is five years of living in distress...”

The plight of the Rohingya, persecuted in Myanmar, living in containment in Bangladesh, trafficked and living as illegals in Malaysia and elsewhere is fast becoming a pressure cooker that no-one seems inclined to take off the stove.

The approach to assistance in Bangladesh, the only country to open its borders and offer sanctuary to now over 1 million Rohingya, is increasingly unsustainable. International attention is pulled elsewhere with new emerging crisis and funding for the response is ever harder to secure. A funding crisis this year may have been avoided, but no-one expects this to last. Five years on, the humanitarian response must transition from one based on a minimum provision of emergency services to one better suited to a long-term resettlement reality. After all, if five years is not already long-term then what is? 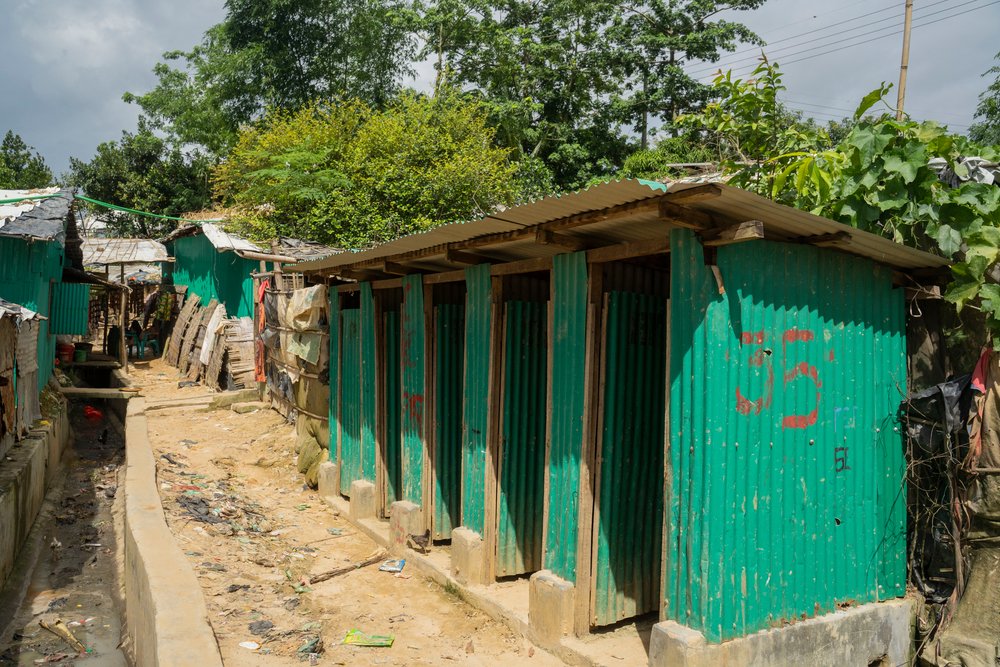 This kind of policy shift however remains unacceptable for a country that understandably cannot concede to Myanmar and others that it must assimilate one of Myanmar’s most persecuted minority groups into its own population. The Rohingya are therefore stuck in a state of ‘temporary’ limbo, and the policy is to keep things that way. Bangladesh (with good reason) wants the Rohingya to return to Myanmar, which stripped them of their citizenship 40 years ago. Nearly every Rohingya I have spoken with wants to return to Myanmar, to their original homes, property and lands. But the country has been at war with itself since the military seized power in February 2021, and in their home province of Rakhine state tensions between the Myanmar military and Arakan army are increasing. Our own teams on the ground there know firsthand the conditions for those that remain in Rakhine are unacceptably bad, and safe repatriation to this region is simply not a responsible option yet.

Adding to the boil of our already pressured pot, across the region, Rohingya are treated as illegal and exploited by authorities, host communities, smugglers, and traffickers, who seek to benefit from their precarious status. They experience prolonged detention and deportation by the police and immigration services; extortion of bribes by state officials; exploitation by smugglers and dangerous journeys to so called safety. In Malaysia and Indonesia, they are turned away at sea, with some left adrift for months and others dying due to heat and starvation. In April this year, more than 500 Rohingya escaped from a detention centre in Malaysia allegedly due to poor living conditions and lack of access to medical services. 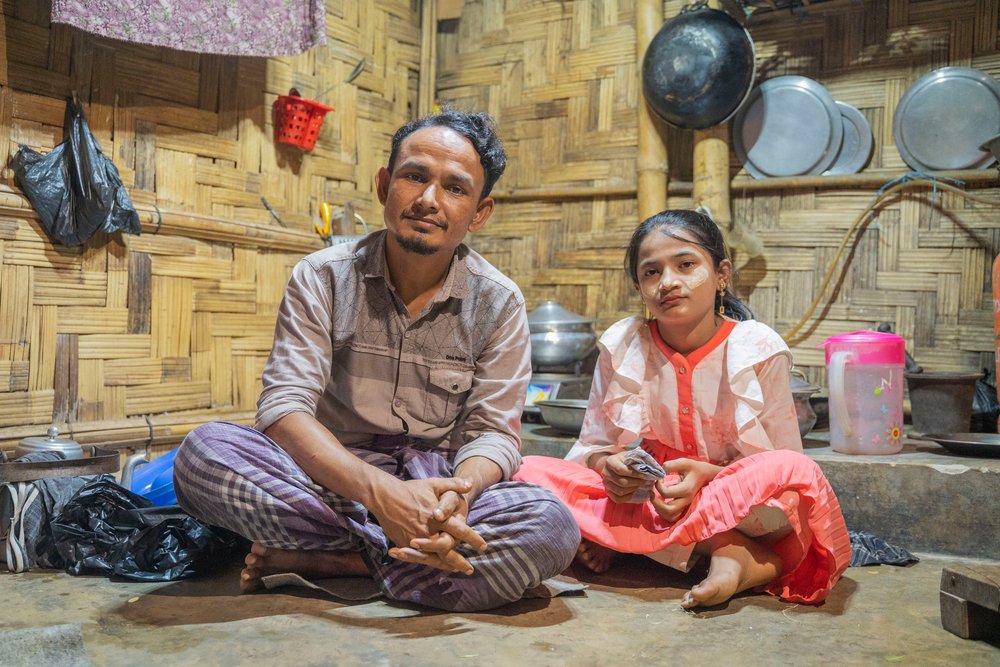 Saikat Mojumder/MSF
Rohingya refugee Nur Huda and his daughter Hosna, have been living in a small, bamboo shelter in Jamtoli camp in Cox’s Bazar district, Bangladesh, for the past five years. Nur Huda fled from his village in Myanmar with his family of six after violence broke out. “It took us 14 days to reach Bangladesh. My children were starving and dehydrated when we reached Bangladesh.”

Bangladesh now feels the weight of responsibility is unfairly on them alone, compounded by public scrutiny and critique of their every action, whilst their neighbours who opt to do nothing, are not in focus. I agree with Bangladesh, Regional States have, if anything, become part of the problem, favouring securitization of their own borders over persevering to find solutions together. It feels like ASEAN has run out of steam, with nothing new to try and no-one willing to champion what has become a fraught political problem. Wealthy nations like Australia, who’s own harsh push back and offshoring policies have helped legitimise similar practices elsewhere offer no resettlement pathway for the Rohingya at all, whilst in contrast it has increased its intake of refugees from Afghanistan and Ukraine.

“Rationalisation” is now the buzzword for the UN led response in Bangladesh. Reducing unnecessary duplication and uneven service provision, localising assistance programs, aka doing ‘more with less’ has legitimacy after such a protracted humanitarian response. But this means stretching an already inadequate approach even further, and without improving accountability it will be harder to meet the quantity, quality and distribution of essential services required. Referrals to our MSF clinics have already been increasing, as medical services are suspended through lack of funding and essential supplies. Our patients are forced to come from further away, negotiating and paying their way through camp checkpoints beyond our so called ‘catchment areas’. Evidence that confining people behind fences in camps within camps will be untenable if they don’t all have access to the essential services they need. 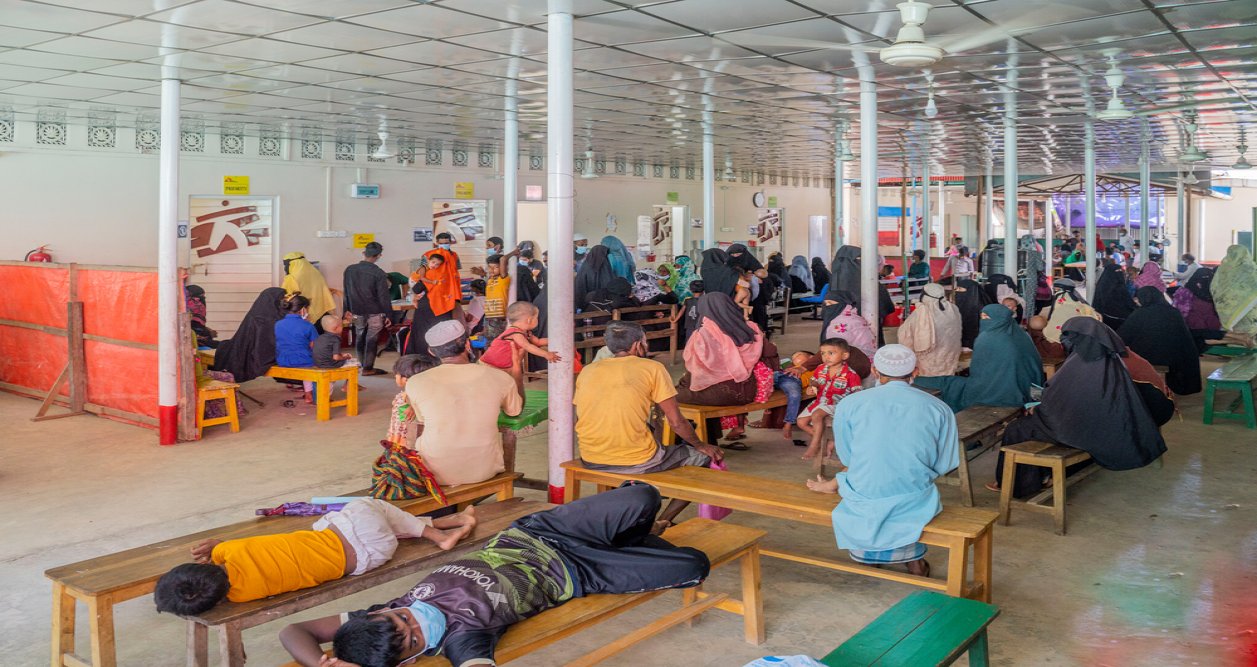 MSF Kutupalong Hospital’s outpatient department is busy with patients, both from the Rohingya refugee and host communities. (June, 2022).

The latest scabies outbreak in the camps and the increasing number of dengue fever cases are also symptomatic of the emergency health needs of the population, while year-on-year increases in mental health and non-communicable disease consultations at MSF facilities are indicative of the protracted nature of the crisis. I am struck with the parallels from when we provided mental health care to asylum seekers and refugees in Nauru. There our patients lived under a regime of offshore detention, with no agency and no future. We in turn reached the limits of what we could do to improve their mental health, as long as the policies and practices offered no obvious way out. In the camps in Cox’s Bazar, our mental health professionals told me how emotionally draining it is to know they cannot change the root cause of people's mental health conditions. At the end of a psychosocial session, our patients return to an existence void of prospects, in overcrowded camps that are becoming increasingly unsafe.

It is easy to argue this response has been a success. It has reduced loss of life, alleviated the worst suffering, created order out of chaos, and some proclaim this or a version of this must be maintained. I believe we must ask ourselves if we are becoming complicit in a system of containment (repression? apartheid even?) for a population with no-where else to go?

The reality is we are all substituting for the failures of Myanmar to redress its wrongs. We are also all trying to cope with the cost of political inaction, an impotent failure of collective progress from regional states and the International Community to find durable solutions or even alternative but better temporary ones.

The reality is we are all substituting for the failures of Myanmar to redress its wrongs. We are also all trying to cope with the cost of political inaction, an impotent failure of collective progress from regional states and the International Community to find durable solutions or even alternative but better temporary ones.

In all of this, the Rohingya remain extremely grateful to Bangladesh for giving haven, as hopeless as their situation appears to be. They don’t consider themselves to be Stateless, rather denied the right to citizenship in a State and region they historically identify as their own. The majority say clearly, they want to return, but they will not risk a repeat of history where their children may be taken at any moment, never to be seen again.

A makeshift shelter made from bamboo and tarp at Kutapalong refugee camp at Cox’s Bazar district, Bangladesh. The temporary shelters, occupied by Rohingya refugees who fled the atrocities in Myanmar, are small and cramped closely together. (June, 2022).

Looking out from MSF’s Hospital on the Hill I realise we must all push back against the overwhelming sense this cannot be fixed. We must take actions to relieve these growing regional pressures. There are things that can be done. A good start would be ending draconian refugee policies practiced across the region.

Australia’s new Government could set a new tone for humanity and solidarity, starting with the Rohingya. They can seek to open resettlement pathways for Rohingya from Malaysia and Bangladesh. Australia could recalibrate its anti-human traffic support across the region to be more accommodating of people who qualify as refugees and deserve extra protections. 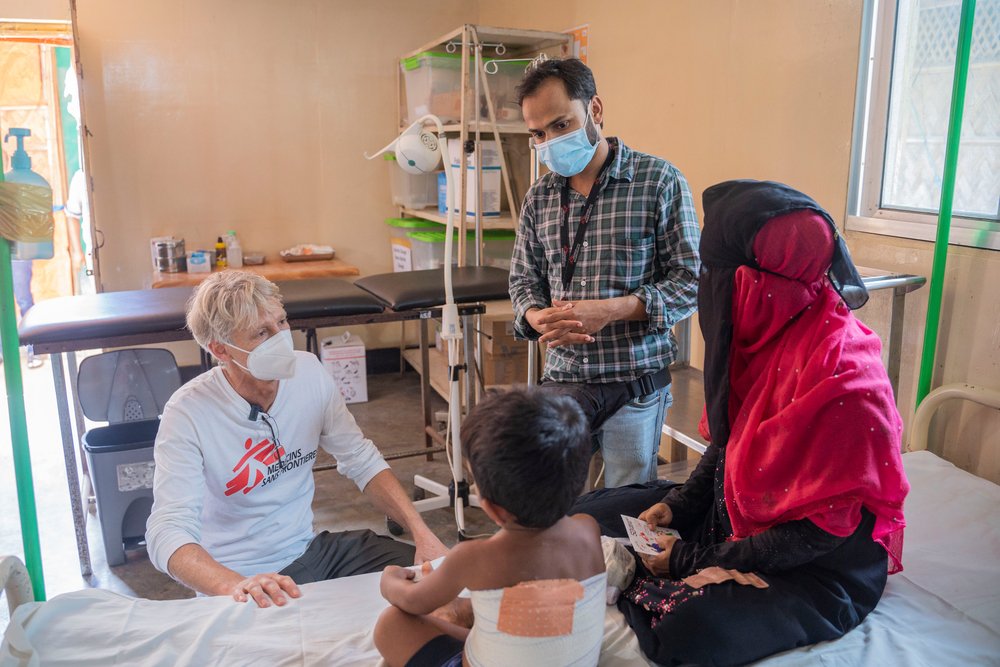 Malaysia, Thailand, and Indonesia need to be more accommodating of refugees. Refugees cannot be treated as irregular economic migrants. While both are extraordinarily vulnerable, refugees seek refuge from persecution and require special protection.

Diplomatic channels with Myanmar must remain open, and a stronger, coherent regional and international approach with Myanmar has to be hammered out, with China at the forefront. Most of the Rohingya I spoke with want to return to Myanmar. China can lead in negotiating safe return of Rohingya from Bangladesh, but China must consider how Rohingya will be compensated for lost property and livelihoods within those negotiations. Returns must be more than a political façade designed to placate voters and must solve the issues of the Rohingya themselves.

Failing meaningful and safe return to Myanmar, I worry what the future holds? How long can a people live in a situation where basic protection and hope is so scarce? Trauma is cumulative. After forty years of statelessness and injustice, I worry the care we provide only manages to keep people alive to live in hopelessness.

Paul McPhun is currently the Director for Doctors Without Borders / Médecins Sans Frontières (MSF) regional South-East & East Asia Pacific Partnership (SEEAP) covering Indonesia, Malaysia, Philippines and Thailand. Prior to this, he served as the Executive Director for MSF Australia from 2010 to 2020, and has been working in various capacities in Doctors Without Borders projects since 1997.