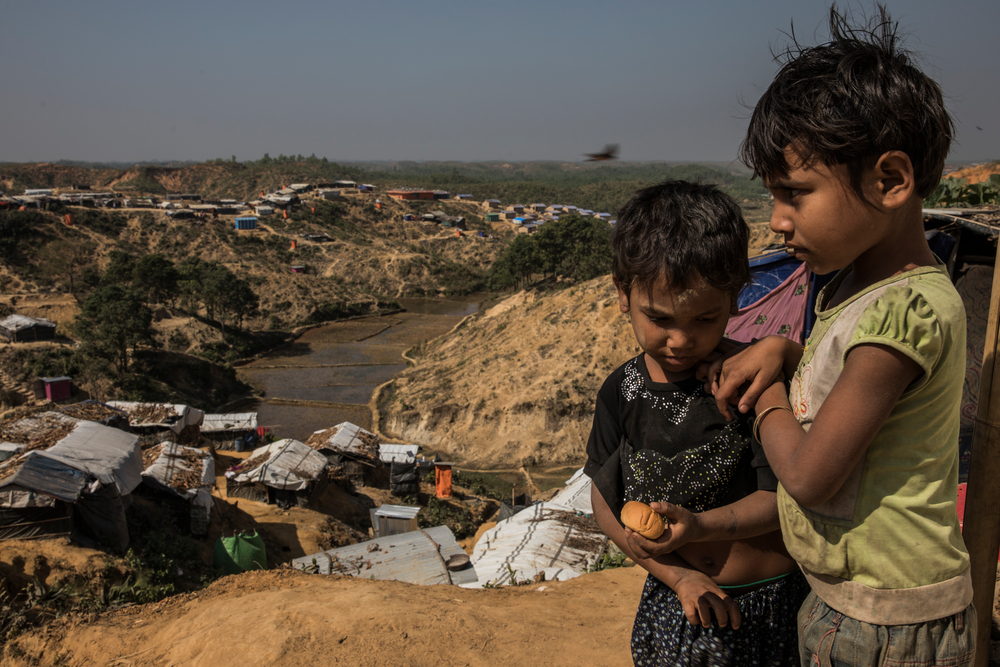 Bangladesh has received nearly 688,000 Rohingya refugees since 25 August 2017. They join tens of thousands who were already in the country from previous periods of tension and violence in neighbouring Rakhine state, Myanmar.

The thing I find most striking about this situation is its magnitude – the sheer number of people who have crossed the border in a short space of time, barely six months. In fact, people continue to arrive.

The numbers of people arriving now are not massive, like in the beginning of the crisis, but we still see a few hundred reaching the country every week after crossing the Naf river. The newly arrived refugees say that they feel unsafe, threatened and harassed at home, in villages that are often abandoned; they try to sell their goods in any way they can in order to board a boat to reach a country that has made and continues to make a huge effort to accommodate them. The refugees end up in densely crowded and overpopulated makeshift settlements in the Southern district of Cox’s Bazar. Their shelters are mostly made of plastic and bamboo, packed closely together and with inadequate water and sanitation conditions.

As we see through our medical consultations in all the settlements, the Rohingya were already marginalised and excluded in Myanmar. They had very little or no access to healthcare and were not routinely vaccinated against communicable diseases so their immunisation status is very low.

Diseases we are treating

Our medics treat many people with diarrhoea and respiratory tract infections – diseases related to the living conditions in the camps. We also see wounds that have developed into serious infections after not being properly treated, chronic diseases that have never been properly addressed and fragmented families in which children or disabled people have to look after many others, secure essential supplies or build their own shelters.

All these factors combined: the sheer size of the population, the densely crowded conditions, the inadequate shelter, and the apparently very low immunisation status, create a perfect storm for the public health situation. It is a very fragile situation that requires constant attention from our personnel and other organisations working on the ground.

Something I am concerned about is fresh emergencies within the current emergency. For example, the upcoming rainy season with the monsoon and tropical storms in an area that is prone to heavy cyclones presents an obvious greater potential for waterborne diseases such as acute watery diarrhoea, which is a significant concern. We have already seen how people's vulnerability can increase rapidly – right now we’re treating people for measles and diphtheria.

There is always a risk of facing diseases for which aid workers and the health system are ill-prepared. In this regard, there is an opportunity for all actors responding to this crisis to increase both the number of people targeted for vaccination coverage as well as the number of diseases to vaccinate against.

Furthermore, there are very few settlements that can be accessed by vehicle, a lot of them still have to be navigated on foot. We are concerned about the nature of the shelters, how robust they are and if they are really prepared and equipped for the heavy rains. We’re considering the possibility of landslides or even something as simple as the pathways becoming very muddy leading to more people falling and incurring injuries and fractures. We are currently preparing our own emergency response, trying to anticipate the potential damage to our health structures, so we have supplies to make quick reparations and become operational again.

After the rush of the last few months here, our priority now is to consolidate our medical activities, focus on secondary healthcare services and our emergency response to outbreaks, to be ready to respond if the crisis becomes protracted and forgotten.

In the early days water and sanitation and primary healthcare were priorities for us, but now we see other actors working on this. However, there remains a gap in hospital services. Further to this, mental health services remain an important part of the intervention for people who have experienced extremely high levels of violence, as confirmed by the retrospective mortality surveys we published in December.

While we continue responding to the emergency, in coordination with the authorities, it is important to make an effort to improve the acceptance and understanding of our crucial humanitarian work. The area has seen its population increase drastically, with the subsequent added pressure to the local economy, environment and daily life of a host community and country that has kept its borders open in a crisis that is far from over. 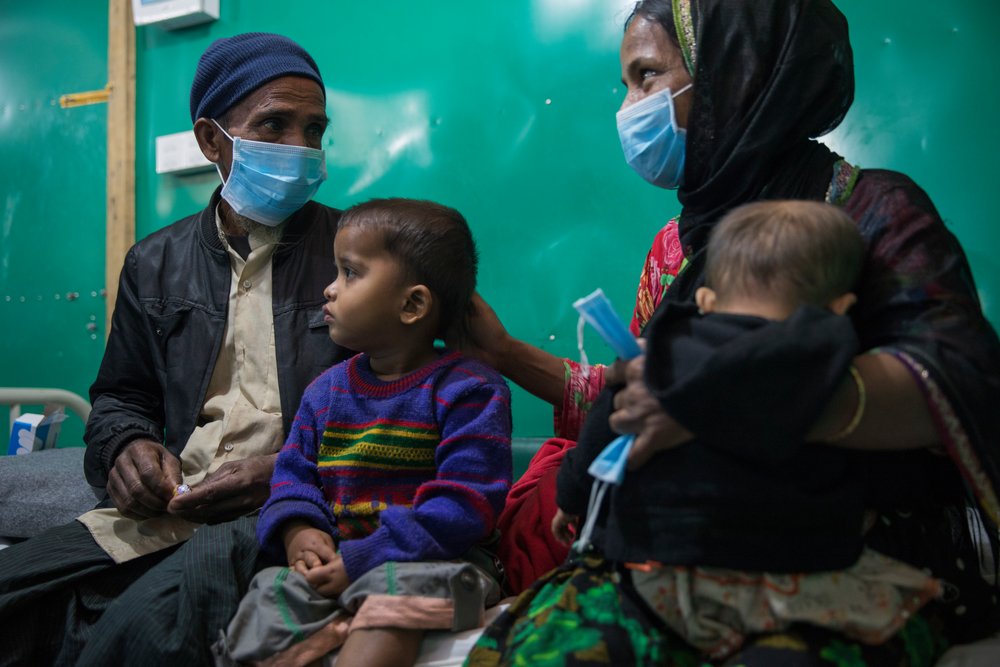 Anna Surinyach
A Rohingya family in the MSF’s Diphtheria Treatment Centre in Moynarghona.

Since 25 August 2017, MSF has massively scaled up its operations, and now manages 15 health posts, three primary health centres and five inpatient facilities. The main morbidities among patients in our clinics are respiratory tract infections, diarrhoeal diseases, which are directly related to the poor shelter and water and sanitation conditions in the settlements.

DONATE TO OUR EMERGENCY APPEAL > 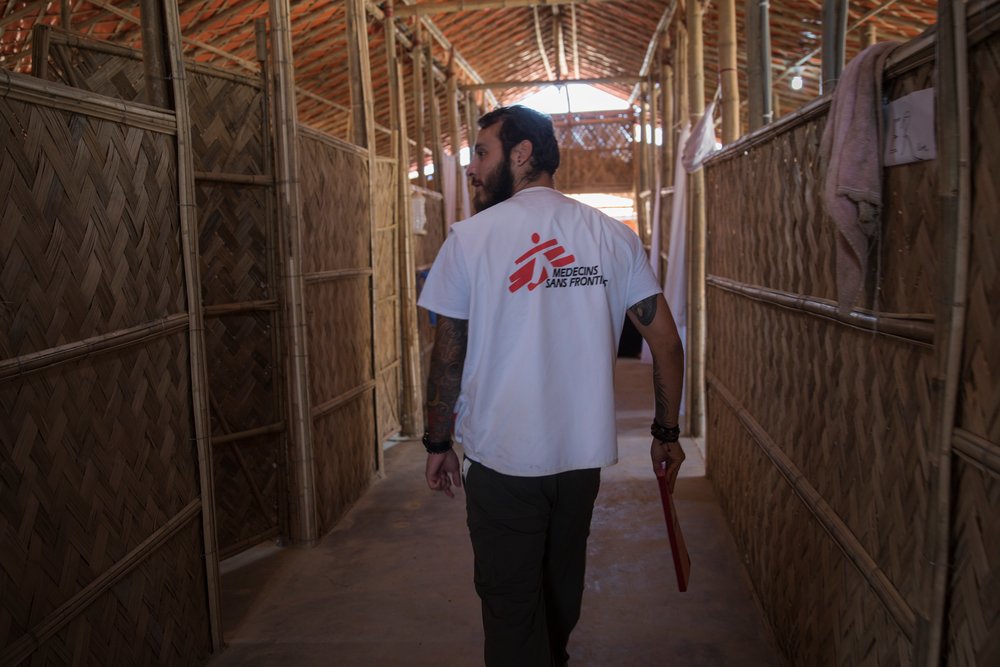 OUR WORK IN BANGLADESH >