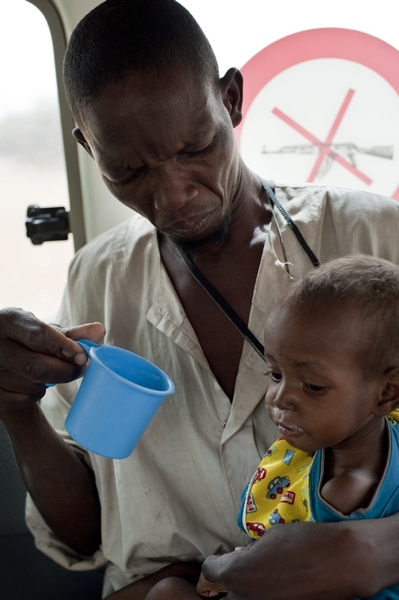 The annual "hunger season" seems likely to be particularly serious in the north-west African countries of the Sahel region this year, and some areas in particular may face acute nutritional crises in the coming months.

Médecins Sans Frontières (MSF) is therefore expanding its nutritional activities to address the seasonal “peak” in malnutrition rates, while also developing longer-term approaches it can integrate into its regular programmes.

A food crisis has been declared in the Sahelian Band of West Africa. UNICEF has estimated that up to 15 million people in six countries in the region are living with moderate or acute food insecurity.

In a region where global acute childhood malnutrition rates regularly near the warning threshold of 10 percent, any factor that further reduces access to food can tip the situation into a full-blown nutritional crisis.

Although MSF has not yet noted a significant increase in cases in most of its current nutritional programsme, the organization did have to open new malnutrition treatment programs in Biltine and Yao, in Chad, where rates of acute malnutrition of 24 percent and 20 percent, respectively, have been reported.

Teams are also evaluating the nutritional situation in other areas of Chad, as well as in Mali, Niger, Mauritania and Senegal.

"It is too soon to know the extent of the expected nutritional crisis," says Stéphane Doyon, manager of MSF's malnutrition campaign.

"Traditionally, the most difficult period is still ahead, between May and July. However, we already project that hundreds of thousands of children will suffer from acute severe malnutrition, as they do every year in this region."

In Niger alone, 330,000 children received treatment of severe acute malnutrition in 2010, making it a “crisis year.” In 2011, which was deemed a "good" year for farming, the number still totaled 307,000. This suggests a recurring crisis.

Julie Remy
"We have to rethink what constitutes a 'crisis' and what is 'normal' in this region," Doyon says.

"More than 300,000 children severely malnourished, this is an enormous number —and that's just in Niger. Emergency humanitarian response is necessary as it allows saving lives, but it cannot be the only option."

This year, early warnings issued last autumn by the governments of six countries in the region made it possible to develop an ambitious response. This response now exists on paper, but it will not be easy to implement. Financing has not yet been obtained and accessing the region's most remote areas will be a challenge.

In addition, insecurity and violence in certain areas are already complicating the deployment of aid. The populations from one country to another, and within countries as well, also have very different degrees of access to health services.

This means that aid actors have a very complex set of tasks in front of them.

Many of the aid organizations working in the region have agreed they must start to transition from emergency response efforts towards structural measures that can assist the longer-term mission to fight illness.

MSF, for its part, is already implementing strategies that can help combat the recurring malnutrition crisis in the Sahel over time, not just in the immediate moment.

For instance, in 2012, the organization will expand its activities in the region in response to the needs of the day.

Projects that MSF has been operating for several years, however—particularly in Niger, Mali, Chad and Burkina Faso—have been designed both to treat the children most at-risk and also to find new ways to address underlying dynamics of recurrent malnutrition.

"No one has the solution, but we now know that treating children by giving mothers responsibility for their care and encouraging prevention by using specialized milk-based products offer extremely encouraging results," Doyon says.

"Our objective is to help identify the most simple, economical approaches possible so that all children have access to them, just like regular vaccinations or access to health care, which have already been recognized as being effective in reducing child mortality."

MSF in Niger and Mali

In 2011, more than 100,000 severely malnourished children received treatment in MSF's Niger programmes alone. More than 90 percent of them recovered.

In Niger and Mali, MSF also provided milk-based nutritional supplements to more than 35,000 children in conjunction with its regular paediatric programmes.

Find out more about MSF's work in Niger and Mali