Samos Island, GREECE: “We only want a safe place for our children”

After the fire that destroyed Moria two weeks ago, the EU have vowed that there will be no more “Morias” –  but a new tent camp has already been set up in Lesvos and a new one is waiting to be used on the nearby island of Samos. Across the Greek islands, there are many other camps with the same cruel containment policies that keep people trapped in terrible conditions, and in Vathy camp, on Samos, the conditions are particularly awful.

“Right here, right now in Vathy camp, we are treating the tremendous suffering inflicted by cruel containment policies on our patients who have already been through so much trauma,” says Jonathan Vigneron, MSF Field Coordinator, Samos.

“In this camp, where there are 4,500 people squashed together like animals, more than 1,000 are children living in dirt and rubbish among rats and scorpions. There are hundreds of vulnerable people, and others who, due to their medical conditions, are at high-risk to COVID-19. Meanwhile we are in the midst of a global pandemic, there are over 50 positive cases inside the camp, and we still haven’t received any clear information about a response plan from the competent authorities.

“Over the past months, with the restriction of movement, the rise in COVID-19 and the complete lack of humane conditions our team have seen a hugely concerning deterioration of our patients’ health and mental health.

“In Moria, we have seen what can happen when this horrific recipe for disaster is ignored, the ticking time bomb exploded. In Vathy we see exactly the same conditions, and we are warning the authorities of an undeniable storm on the horizon. Action has to be taken and it has to happen now before it is too late. We call on people to be moved from the camp to safe accommodation on the mainland, or in other EU states now,” explains Jonathan.

Here, read about some of the stories of those vulnerable people trapped in Vathy camp.

Life in the cruel and dangerous conditions of Vathy camp, Samos island

Golnegar is a mother of six children

Four daughters and two sons her oldest child is a 12-year-old boy while she gave birth to her baby girl in Samos two months ago. Golnegar and her husband took the difficult decision to seek asylum in Europe, after they have been targeted by armed groups in Afghanistan and their children’s life was at risk. They have been in Vathy camp for more than 7 months, and despite the woman’s pregnancy and medical condition, they have not yet been offered a safe place to stay. 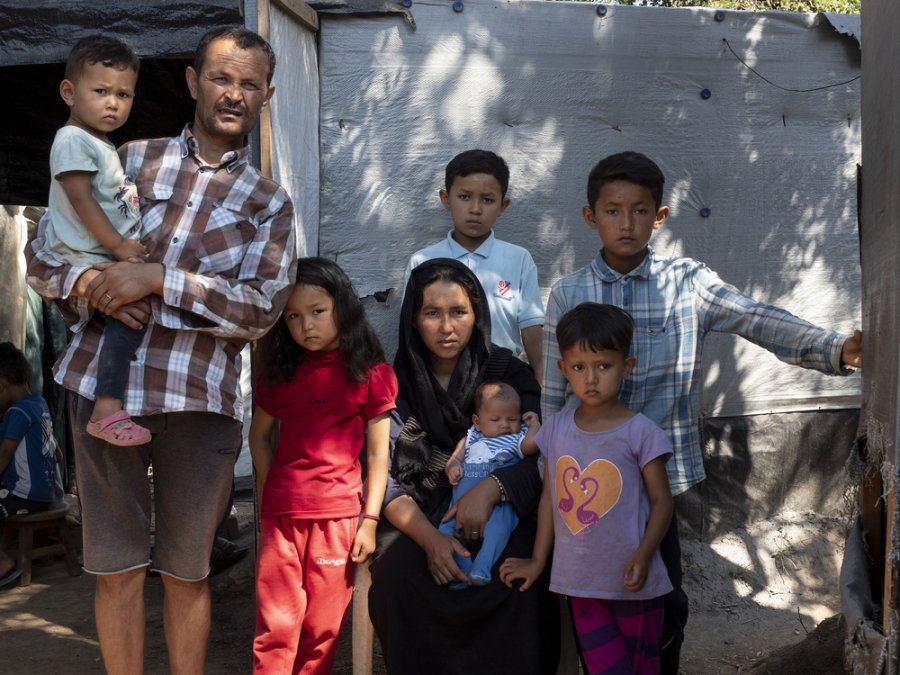 Enri CANAJ/Magnum Photos
Golnegar with her family in front of her tent.

“There is something wrong with my kidney. I am in pain and I have headaches every day, but despite my efforts to see a doctor in the camp or in the local hospital, this was not possible so far. All of my children have insect bites in their body, and they all complain often they feel sick, but there is nothing I can do for them”, says Golnegar, while her husband adds, “We only want a safe place for our children. 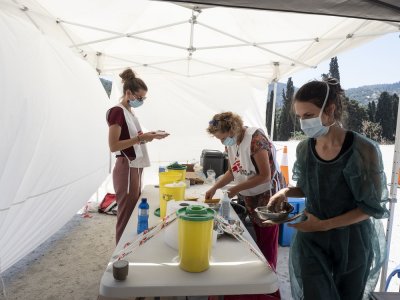 We came here to save them from war and take them to school, and instead, we found ourselves in this camp waiting in limbo for almost a year.

We just want to start a peaceful life and take our children to school and this is possible only on the mainland or in other European country. For how long will we have to stay in this makeshift camp?”

Golnegar started visiting the MSF Day Care Center in Vathy when she was still pregnant and now she continues for regular checkups on her baby girl by the MSF midwifes.

The family is still in Vathy camp

They live in Vathy camp, Samos in a makeshift shelter. They have lost their first shelter to a fire that broke out in the camp in late April 2020. They had to spent almost a month living in a summer tent in an open field, fully exposed to the sun until a family who was leaving, offered them their makeshift shelter. The elder couple has 4 children. 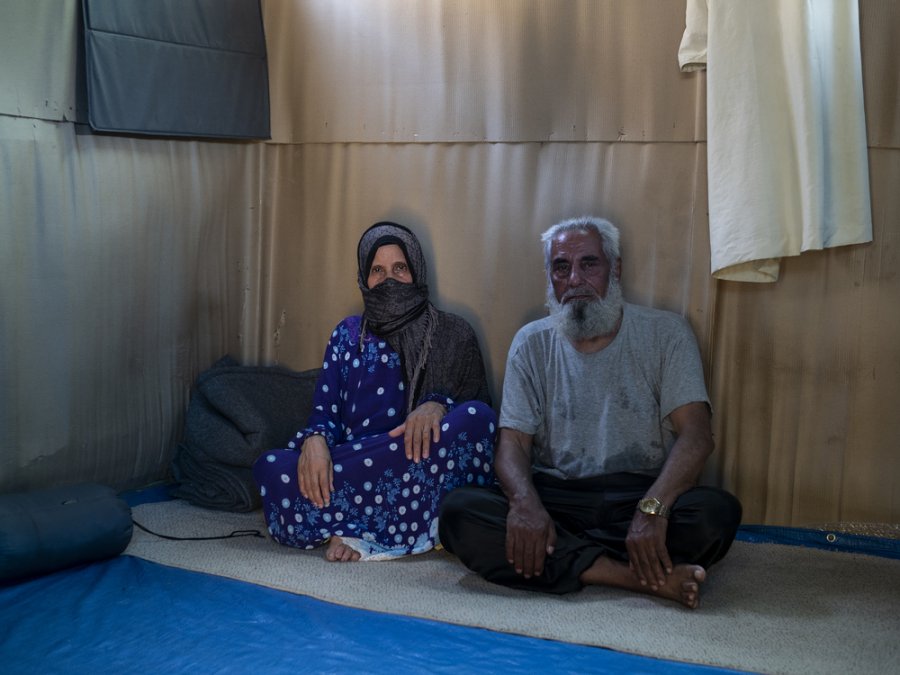 Two daughters, 27 and 37 years old, and two sons, 24 and 29 years old. They also have one grandson, a 10-year-old boy who is asthmatic. Their 24-year-old son is suffering from a permanent vision impairment caused by bomb fragments and both Darwish and Aysha have severe medical problems, which also make them vulnerable to Covid-19, but the family has not been offered a place to safe accommodation in the mainland so far. 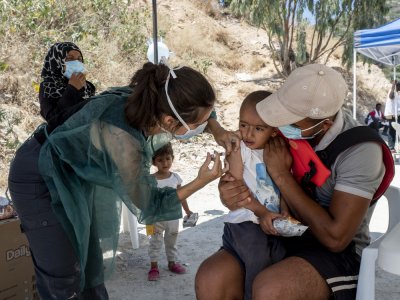 Darwish is cardiac and hypertensive, while he also has problems with his kidney and he cannot walk. Aysha is hypertensive and suffers from headaches and dizziness every day.

“Our children have to do everything for us”, she says, “they have to take us to the toilet, to go bring food and go outside the camp, when they can to buy medication. The living conditions in this camp are unbearable.

There are snakes and rats, we do not have electricity and often there are fights in the camp”. Darwish has seek medical care in the island, but he was not able to access. “The doctors in the camp tell us that in Samos it is impossible to find specialized treatment for my medical condition. They tell us that only in the mainland we will be able to find a doctor. The same applied to my 24-year-old son.

The family is still in the camp of Vathy.

Amira is a 62-year-old woman from Jabab.

A Syrian village located in Al-Sanamayn District, Daraa. She is a widow and a mother of three young men. Her husband was killed by armed men and two of her children, a 30-year-old and a 25-year-old man, have been severely injured by shrapnel in Syria.

“My oldest son has a paralyzed leg and my other son had wounds in his chest. Both needed several surgeries to get better and survive, and they fled to Turkey in 2016. Not having access to healthcare there, they came in dinghy in Greece and were transferred by plane to Germany as severe medical cases. They were travelling alone, carrying each other for fifteen days. I have not seen them ever since.”

Amira came in Samos with her daughter in law and her youngest son, 23 years old, in December 2019 to find a way to be reunited with her sons in Germany. However, to date, this has not been possible, and, despite her age and her medical condition, the woman is stuck in Samos and was forced to live in very unhygienic conditions in Vathy camp for six months. 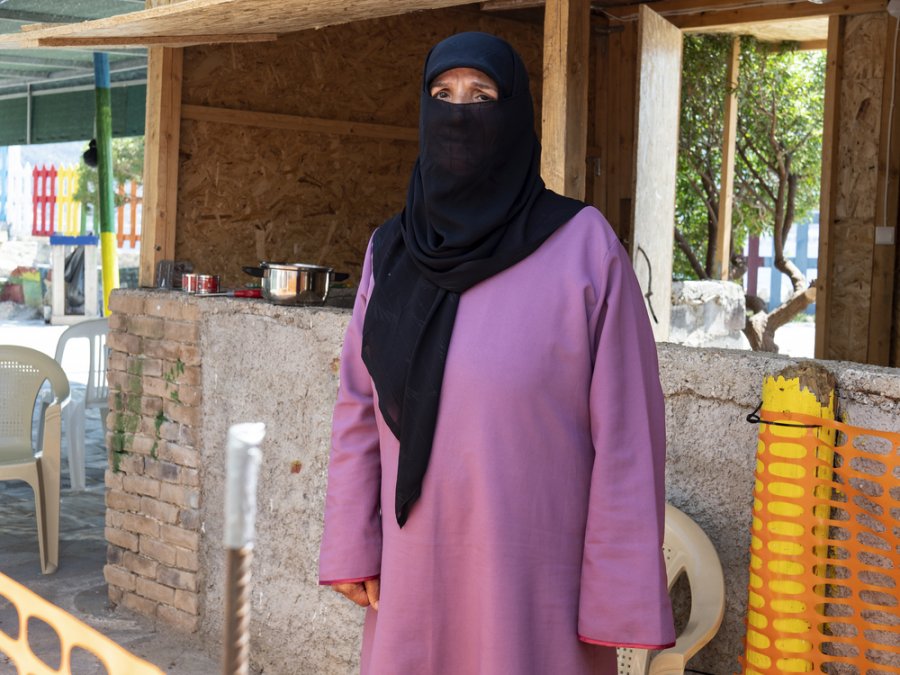 “When we arrived, they gave us only one blanket. I was so cold, and this blanket could not do anything. I quickly realized we would suffer in this camp. At nights rats and snakes come inside the tents and bite us. We cannot sleep, we are just worried all the time about what will happen to us next. But the worst is the toilet. We close our eyes before going to the toilet. It is really really bad what is happening in the camp”.

Amira is asthmatic and needs thyroid surgery. She is also suffering from allergies, has difficulty in breathing and due to severe backpains she cannot sleep at night, but she is also afraid of Covid-19 as she belongs to the high-risk group. “Covid-19 is everywhere in the world and many lives have been lost. I am afraid it will reach the island of Samos, but I am old, and no-one cares about the elderly”, she tells me, but this is not her biggest worry. 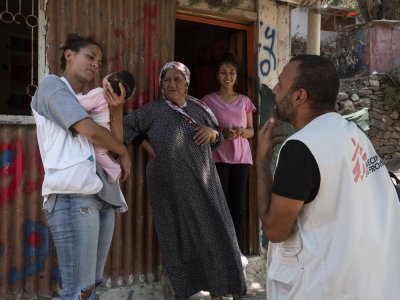 “My only worry and my only wish is to see my children before I die. We escaped war and here I feel I am in another war. I cannot rest. I am so tired. I just want to have a peaceful life in a safe place. I want to see my children, I want to be their mother.

To hug them, to be there for them as every mother would, now that they are sick, in between surgeries in Germany, they need me. I feel their pain from here.

I feel that they want me next to them. I just want to smell them before I die”, she says with tears in her eyes. She has not seen her sons for 4 years.

Amira is currently in a hotel in Samos island and MSF provides her the medication she needs while their case is followed by a lawyer and social worker.

Nabil Kabuli is 70 a year-old man from Afghanistan

He lives in small makeshift shelter with 10 more people, his children and his grandchildren, in Vathy camp in Samos. Among them there is also a 6-month-old baby girl, Alia. They arrived in Samos on February 2020. “We left Afghanistan because of war. 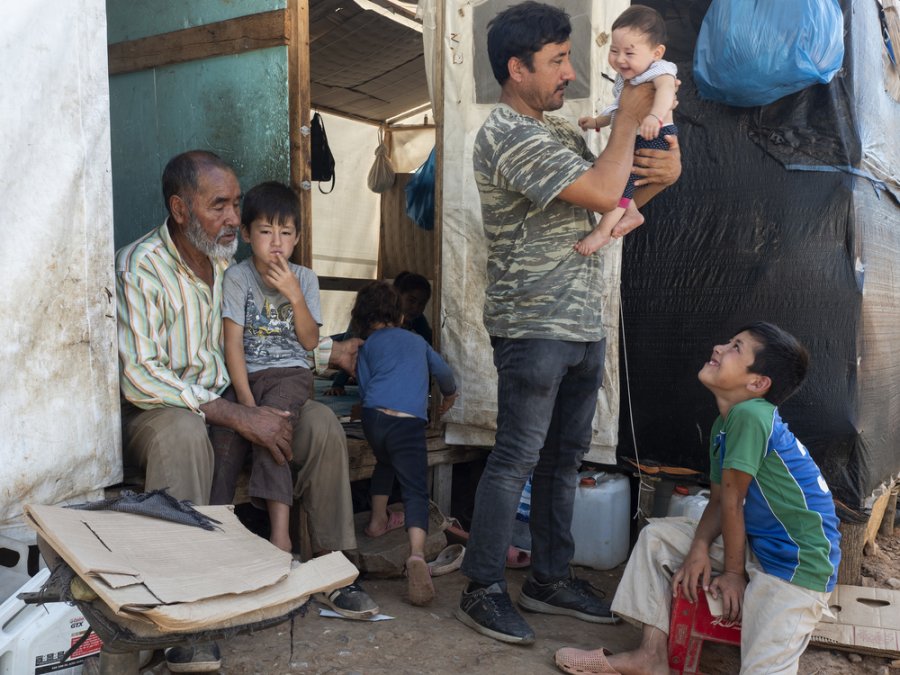 Enri Canaj / Magnum Photos for MSF
Nabil with his family in front of his tent.

Our family was persecuted, and we have already lost a cousin to the war”, says Mohammad, the 34-year-old son of Nabil. Nabil belongs to the high-risk group of people for Covid-19 as an elderly but as he says he is not afraid for himself, but for his children’s health. 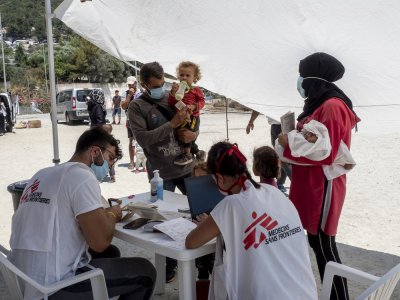 “If Covid-19 arrives here, only God can save us. We came for safety and for a better future for our children. We hope that someone will hear our words and understand we need help. If Afghanistan was safe, we would go back, but it’s not”, says Nabil.

Back in Afghanistan the family was living in a rural area and the old man used to work as a farmer.

The family had received a notification in early July that they will be transferred to a camp on the mainland soon, but at the time of the interview, they did not have any further information.

The family has been transferred to the mainland.

Khalil al Khalil is a 67-year-old man from Syria

He suffers from chronic pneumonia and hypercholesteremia. He lives in Vathy camp, Samos in a makeshift shelter with his underaged son and daughter for 8 months. Originally from Deir ez-Zor, he used to work as a taxi driver. “It is not fair for people of my age to be abandoned and live in a camp like Vathy, with no access to doctors or medication. 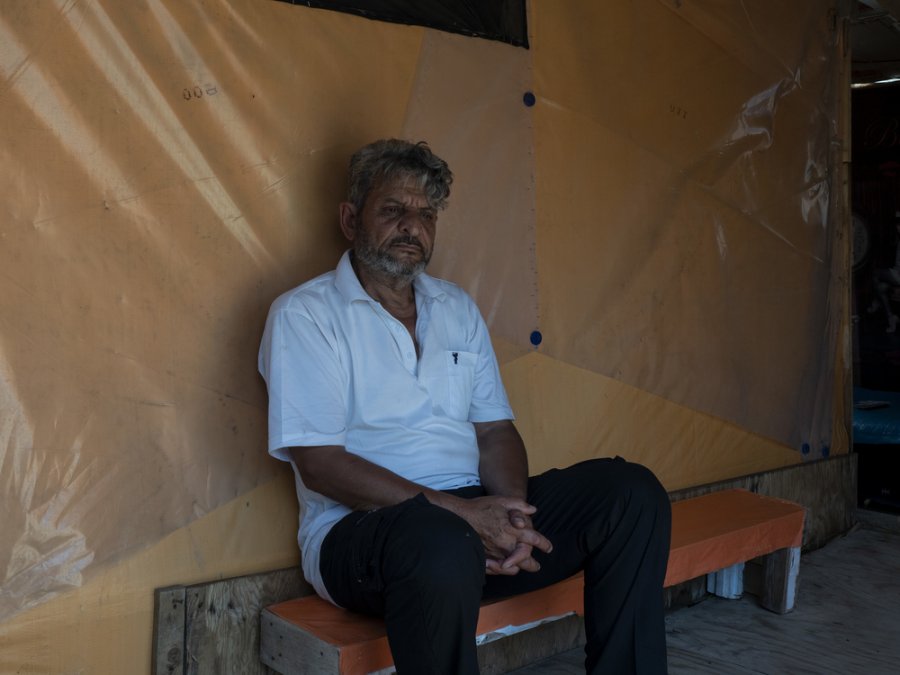 I am afraid of Covid-19 and I am trying to take care of myself by isolating in my tent. However, I know that if Covid-19 reaches the camp only god will save us”. He had tried several times to see a doctor in the camp but until now this was not possible because the doctor does not have the capacity to see everyone.

“We, as Syrians, knew that the European Union and Europeans were open and lovers of hospitality. We thought that Europe would treat us with respect and dignity. We thought it would be safe. My only wish is to live a peaceful life with my children, but for this we need the help of Europe”.

Khalil al Khalil has been transferred to Athens.