Saving the lives of children with thalassaemia: MSF programme in Lebanon more necessary than ever

Médecins Sans Frontières/Doctors Without Borders (MSF) teams in Lebanon have been treating children with thalassaemia since 2018. A genetic blood disorder, in its acute forms thalassaemia requires intensive treatment that MSF provides in a paediatric hospital in the eastern city of Zahle in the Bekaa Valley.

Thalassaemia is a hereditary disease caused by an alteration in the genes required to synthesise haemoglobin, the molecule that is responsible for carrying oxygen in the blood. Patients left untreated can have considerably shorter life expectancy. Treatment requires regular blood transfusions. However this causes iron overload, leading to heart, liver and other diseases, so thalassaemia patients need iron chelation drugs. 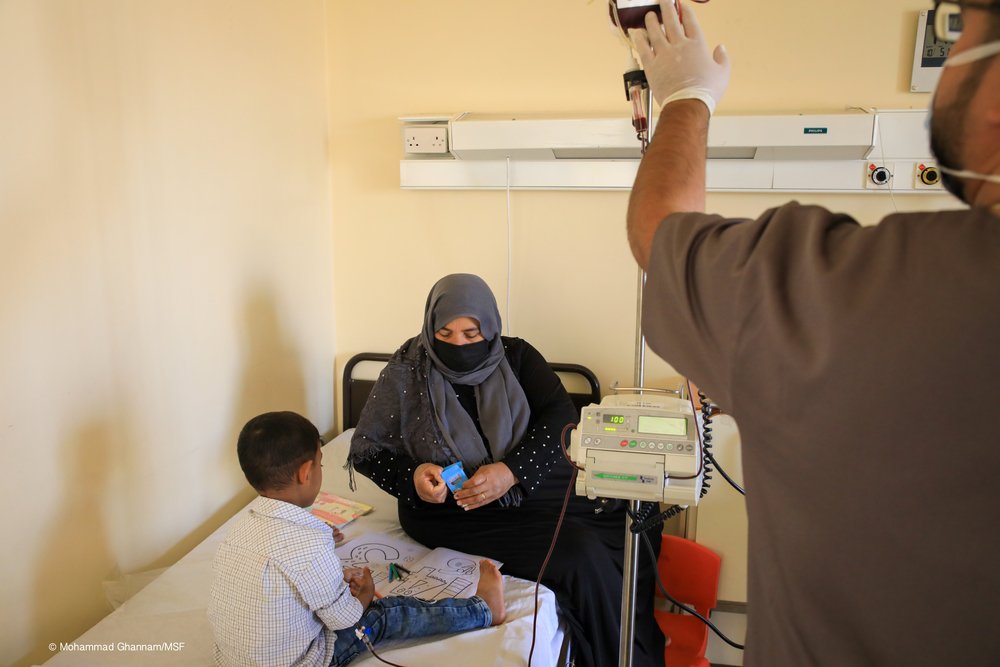 Mohammad Ghannam/MSF
MSF staff prepare to begin a blood transfusion for a child patient with thalassemia.

The MSF programme is the only one in the country providing free-of-charge, comprehensive care to children with thalassaemia, whatever their nationality. Most of the child patients today are Syrian refugees, though some come from vulnerable Lebanese families.

With the economic collapse in Lebanon and the financial impact of the Covid-19 pandemic hitting vulnerable families the hardest, the need for the programme to continue providing life-saving care to these children is greater than ever.

“It was a very difficult period”

Thalassaemia is a difficult disease for any child to live with, It requires recurrent admissions to the hospital, sometimes three times per month, recurrent needle pricks, taking medications every day for the rest of their lives and living with the complications of the disease.

Children with thalassaemia have to deal with the pressure of leading lives that are different in many ways from their peers’, and of learning to manage a chronic condition. But living with thalassaemia is even harder for refugee children in Lebanon, where access to public healthcare is extremely limited for Syrians like Abbas and Youssef. 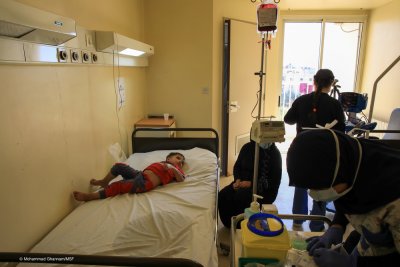 Now safe after years of suffering, their mother Ammouna recalls the reasons why she and her husband decided to take the children to Lebanon.

They had endured years of bombing when the Islamic State group took over the town of Manbij where they were living at the time.

The armed group did not allow civilians to leave the town  so Ammouna could no longer travel to Syria’s second city Aleppo to buy the medication her boys needed to bring the iron levels in their blood down.

Then, after the Kurdish-led Syrian Democratic Forces took over, travel became possible again, but blood transfusion services came to a near-halt. “So for three years, I had to arrange for the blood transfusions at home,” Ammouna says, adding that she had to ask members of the community for blood donations.

“It was a very difficult period,” she adds. Ammouna and her husband eventually took the children to Lebanon, hoping life would be kinder there. But they quickly discovered the prohibitive costs of healthcare in Lebanon’s private clinics. 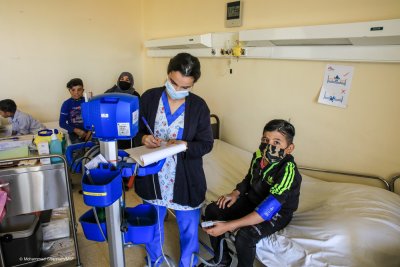 They were on the verge of giving up and returning to Syria when they found out about the MSF programme at the Elias Haraoui hospital in Zahle, which provides comprehensive care for thalassaemia patients free of charge.

“Here at the hospital, my boys receive the transfusions and medication they need,” says Ammouna, who works on a local farm for a daily wage, and whose husband is a carpenter. “We’ve been coming here for some three years now.”

The MSF-run programme at the Elias Haraoui hospital in the heart of Zahle currently provides treatment for 96 children living with thalassaemia. “We increased the number of the children we treat from 74 up to 96 in November, says Dr Layal, MSF’s medical activity manager for the programme. We wished we could do more to respond to the needs but we are limited by the very high price of the thalassaemia drugs.”

Abbas and Youssef are two of these children coming regularly to the hospital. The staff knows how crucial it is to help raise the children’s spirits when they come in for their transfusion, every two to four weeks. “Over time, the hospital has become the thalassaemia patients’ “safe place, their playground”, notes Dr Layal.

It is far more than a medical centre here, families learn about the disease, how it is transmitted, and most importantly that their children can live with thalassaemia if they get a proper treatment. To her, one of the objectives of the programme is helping the children to see “that they are not alone, that they can go to school, that they can grow up and go to college, and that they can get married and have healthy kids.” 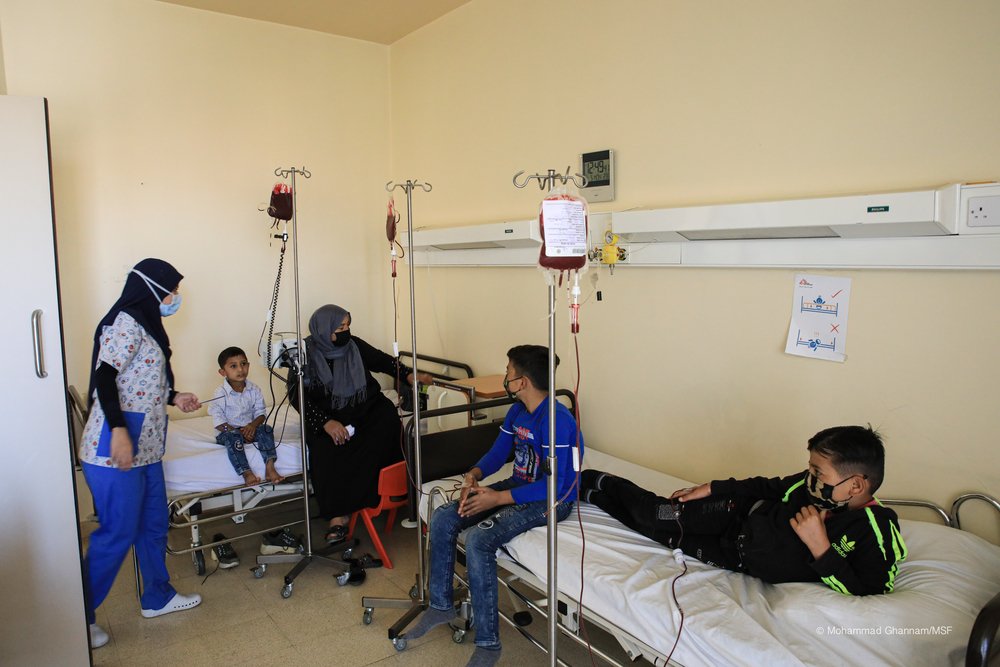 Building a strong bond with the families of children with thalassaemia is especially important because the disease is so emotionally taxing on both the young patients and their parents. “This project has definitely made a big difference in these families’ lives,” Dr Layal says.

MSF pediatrician Dr. Alaa echoes Layal’s words. “Thalassaemia in general is very difficult for the parents and for the children,” he says, adding that some families must travel long distances in order to reach the hospital for their child’s regular transfusion and follow-up.

“They face psychological difficulties and we have a psychologist who visits to support them,” Dr Alaa says. MSF’s external activity department also helps the parents enroll their children in school. Dr Alaa describes the patients “like our own children. We feel the suffering of the parents. We feel and understand their suffering.”

Few parents know the pain of seeing their child suffer as much as Syrian refugee Amira, mother of two-and-a-half-year-old Mohammad Nour. Amira, who lost her elder daughter to thalassaemia before her younger son was diagnosed with the same disease, is grateful to now have access to health care for her surviving child, free of charge at the Elias Haraoui hospital.

“My daughter died, but I want Mohammad Nour to survive, but he suffers a lot. He is always crying and always restless”

Nonetheless, their lives are a daily struggle. Mohammad Nour needs a transfusion every two to four weeks to compensate for the lack of hemoglobin in his blood. “My daughter died, but I want Mohammad Nour to survive,” says Amira. “But he suffers a lot. He is always crying and always restless. I want him to get better so he can lead his life like other children before it’s too late.” 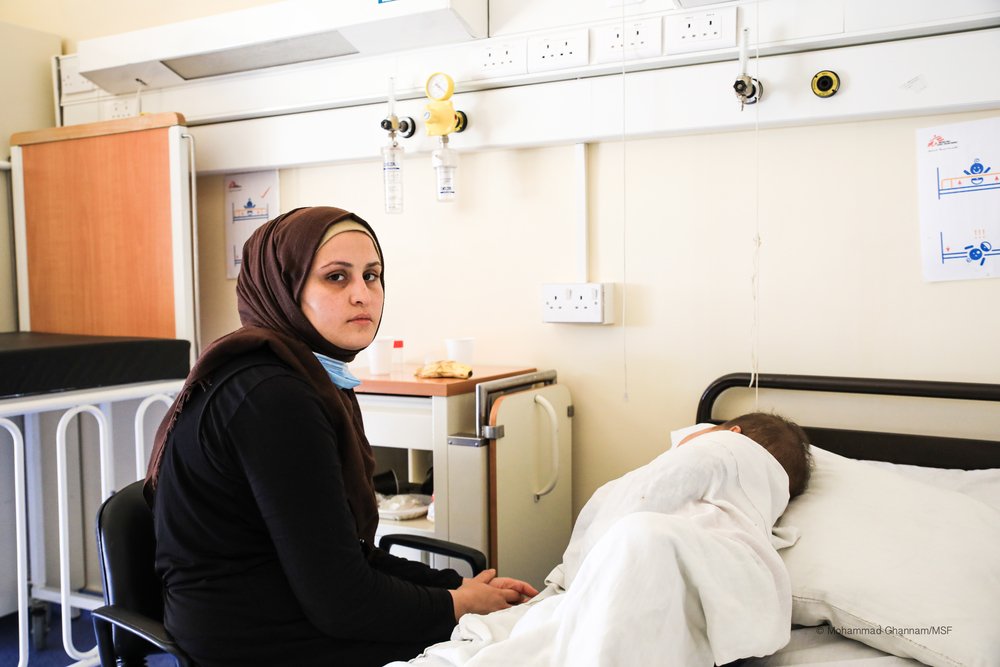 Mohammad Ghannam/MSF
Mohammad Nour is 2 and a half years old, and his mother's name is Ameera.

Dr. Haytham, a pediatric cardiologist at the hospital, says most of his thalassaemia patients are Syrian refugees, with many of them living in makeshift refugee camps in the area around Zahle, though MSF staff also sees some Lebanese children. Some children suffer from more severe medical complications than others.

Mohammad Nour must also take corticosteroids -- without them his body rejects the transfusion. But this therapy has side effects including emotional disorder. “This adds to the suffering of the mother,” Dr Haytham says. - Covid-19, Beirut explosion

According to the UN, there are nearly 880,000 Syrian refugees in Lebanon. Around 40 percent of them live in the Bekaa Valley, where MSF’s thalassaemia programme is located. 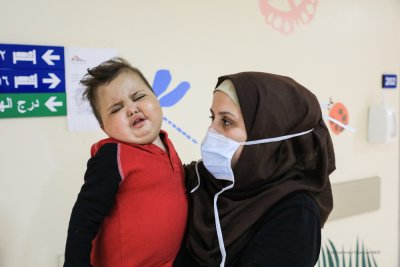 The collapse of the Lebanese economy, compounded by the impact of the Covid-19 pandemic, has made it even more difficult for Syrian refugee families to access already overstretched public health services.

The Covid-19 pandemic has impacted families of children with thalassaemia in many ways.

Community health worker Sami says the main impact has been the increased difficulties in securing blood donations that save thalassaemia patients’ lives. With Covid-19 restrictions in place, roads linking towns are often closed and public gatherings are banned.

“We are trying to get people living in the refugee camps around us to donate blood, but this has been difficult too because people are wary of dealing with medical staff unless they have a medical need.

They are afraid of us because of our work, some people think we present a Covid-19 transmission risk,” Sami says. “Every day we explain to people in the communities we work with to convince them that it is safe to donate blood,” he adds. The August explosion that obliterated Beirut port made the situation even harder. When Sami and his team approached potential donors in the aftermath of the blast, many said they had recently donated for the injured. 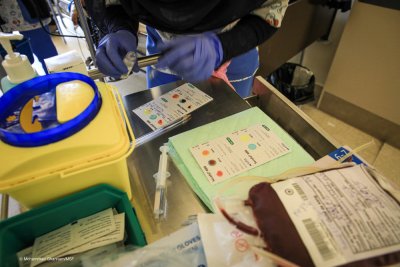 The dearth of donors poses an even greater risk for people with rarer blood types such as O negative and AB negative. “We are expanding the areas we target for donors.

We will keep fighting,” Sami says. “This is the only way.” Gharam, MSF’s external relations supervisor for the Zahle programme, says that one of the ways she and her colleagues ensure that enough blood donations are made is by providing transportation for donors to Lebanese Red Cross centers that are working with MSF.

“Blood transfusions done in hospitals are very costly,” Gharam says, adding that refugee and other vulnerable families already have a hard time putting food on the table, even before they consider any medical costs.

War was raging in Syria when Hani and his wife fled to Lebanon. Soon after their first child Dalal was born, a doctor diagnosed her with thalassaemia. “That was the beginning of our nightmare,” Hani says.

For every blood transfusion that Dalal needed, Hani and his wife had to pay over $200 in hospital fees alone. “Paying the hospital was more important for us even than buying food for the house,” he says, adding that it was excruciatingly difficult, even humiliating, to find a donor each time to secure the blood required for every transfusion. The father, who earns an average $300 a month painting houses, describes one incident when his daughter was so ill that she had to be hospitalised. 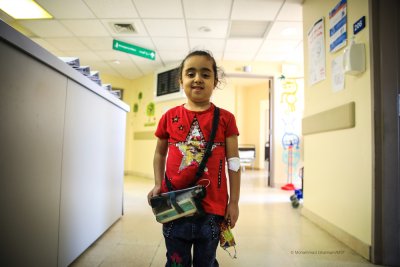 When her condition improved, the hospital asked him for $2,000 in fees -- a sum he and his wife simply could not afford.

“I left my ID at the hospital so I could get her discharged, and sold all my belongings, even though that raised only about half of the sum. I borrowed money from everyone I knew, but even that was not enough.

I ended up living without an ID for a full year -- you can imagine how difficult, how risky that is for a Syrian refugee in Lebanon,” Hani says. Eventually, life took a turn for the better in 2018 when he found out about the MSF programme. Dalal, now seven years old, receives regular follow-up free of charge.

“Now I see my beloved Dalal smiling and playing like any other child. I am happy she is receiving the best possible treatment for her illness for free, offered by the kindest medical staff I have met in my life,” Hani says. As refugees in Lebanon, the family still faces a long, tough road ahead. “But I am so happy and grateful for what we have now,” he adds.

help us save lives: donate today >