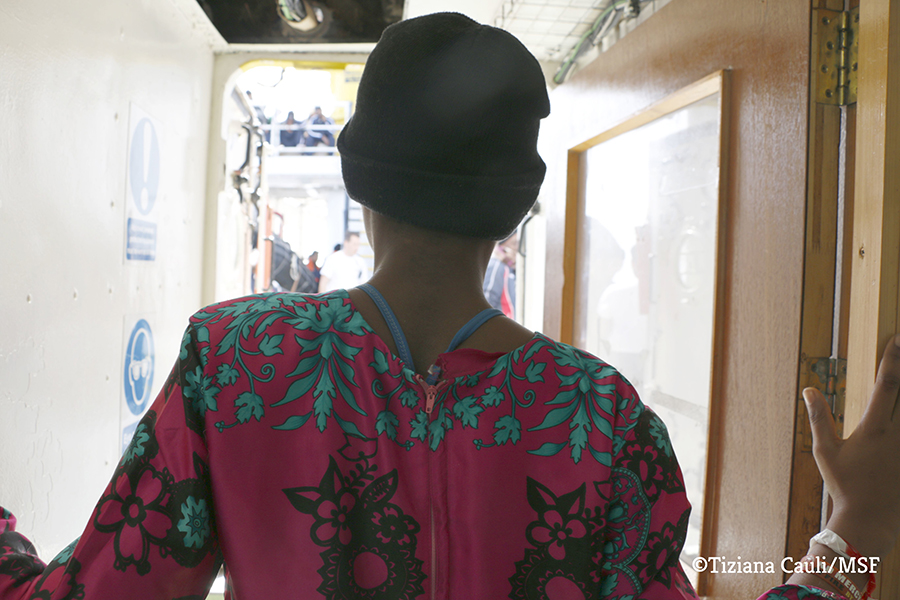 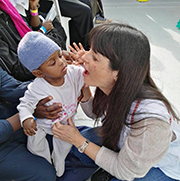 Jewel steps on board the Aquarius looking like a little frightened bird who finally found shelter from a storm.

She shivers from cold and fear.

She has just survived a dreadful nine-hour journey across the Mediterranean Sea in a small rubber boat, crammed with over 100 people. She had embarked during the night on a Libyan shore.

Her clothes are still soaking wet when she bursts into tears in the arms of a Médecins Sans Frontières (MSF) midwife, who is welcoming women on board.

I'm on board working as the field communication manager. 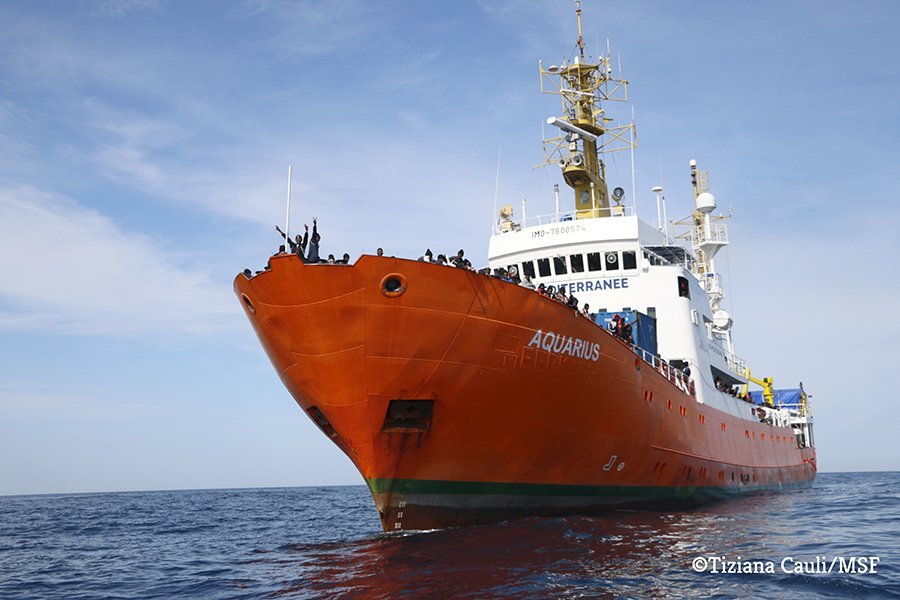 Jewel and her two sisters are among the 333 women saved from the sea since the beginning of the year by the team on the MV Aquarius, a search and rescue vessel operated in the Central Mediterranean by MSF and partner organisation SOS Mediterranee.

Twenty-year-old Jewel and her younger sister, both from Gambia, are also among the 46 pregnant women MSF assisted on board of the vessel in the same time period.

“Almost all of them have suffered violence either at home or in Libya,” our midwife Elizabeth Ramlow tells me. “There, many were kidnapped and raped.”

Once these women get to Libya, Elizabeth says, often after a very long journey marked by violence and pain, they have no other way out than the sea.

“They really have no choice and this is why they keep coming,” she says.

One of the women on board is travelling with her husband and two small children. Her brother and his family attempted the crossing not long ago.

Still, she put herself and her kids on a rubber boat.

“This is how desperate she is,” says Elizabeth.

"We were floating in the waves. It was very scary."
jewel

The mother of two from Sierra Leone is not the only one who was prepared to risk her life just to flee Libya.

‘’I prefer to die in the water than to die in Libya,” says Mary, who spent one week in a Libyan prison after she arrived in the country from Cameroon.

Next to her, Jewel has changed into dry clothes and is now calm and relieved.

She was scared throughout the entire journey, she confesses.

“It was better at night,” she tells me, “because I could not see where I was.

"When the sun started rising I looked around us and there was only water.

"We were floating in the waves. It was very scary.”

Aquarius is now moving towards another boat in distress. Jewel says she is not tired and she wants to help assist the new women who will come on board. 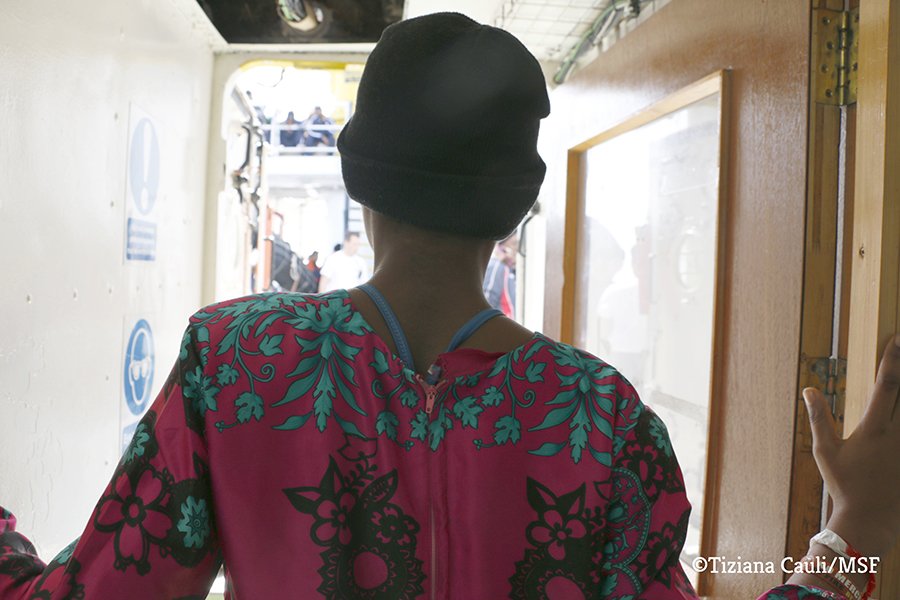 She can’t wait for the next group of people to be rescued and taken on the vessel, as she hopes her husband will be among them.

They went to the shore together, but while Jewel and her sisters were able to embark in the same rubber boat, her husband, injured after he fell from a wall while trying to escape from a detention centre, was forced into another one.

Back in Libya, where they spent more than a year, Jewel and her sisters were kidnapped and detained several times too.

"They did bad things to the women"

“The last time we were in a prison for six days,” she recalls. “Four girlfriends were with us but they died after two days because they would give us no food and no water.

"Their corpses were left with us in the cell for four days. They were rotting and they smelled.

"We could not sleep at night because our dead friends were next to us. We were crying.

"We, the blacks, are not human to them - we are slaves."
Jewel

"We wanted to leave and we begged for food and water. They didn’t give us any, but in the end they let us go.”

When they were taken and detained, Jewel and her sisters were separated from Jewel’s husband, who, like other male prisoners, was assigned to forced labour. The women did not have it better.

“They did bad things to the women,” Jewel says. “They would make us take our clothes off to search for money and they searched even inside there,” she adds while pointing down at her groin.

"If you say no, they shoot you"

“They can do what they want because they have guns and if you say no they shoot you.

"We, the black, are not humans to them, we are slaves.

"If you are a woman it’s even worse. They touch your breasts and even down there and you can’t say anything. They make you pregnant and they don’t care.”

In prison, Jewel met a mother who had given birth in captivity.

An older child was with her too and the guards threw boiling water on her for no particular reason. The little girl was badly injured. “They are still in prison,” Jewel says. 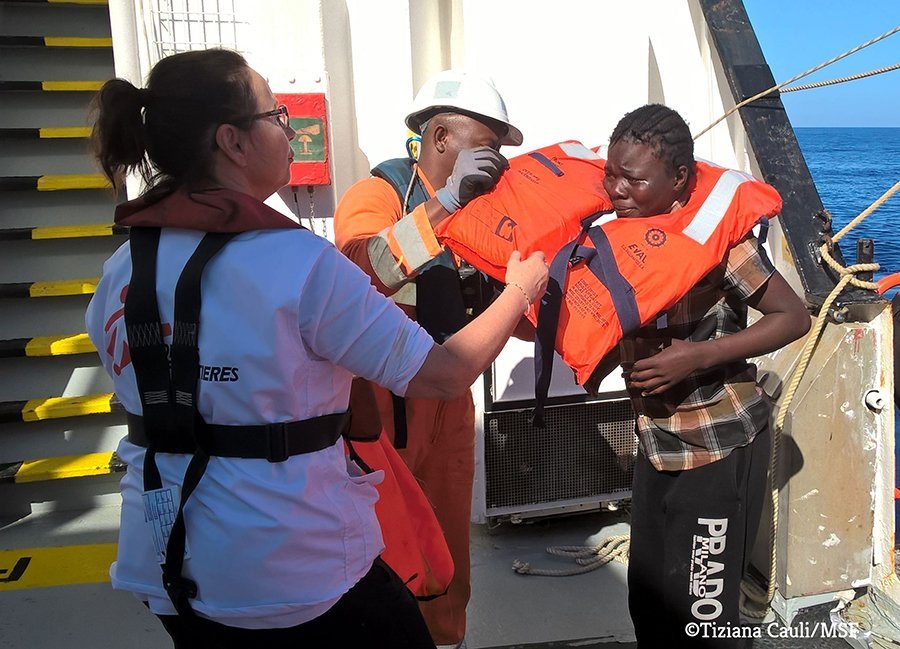 When they suffered or witnessed abuses of this kind, Jewel and her sisters would try hard not to cry.

“If they hear you cry they beat you on your head with their guns,” the young woman says. “I have seen a huge man go crazy because they hit him very hard on the head many times.”

Jewel’s husband was not among the next group of people rescued at sea by the Aquarius.

She didn’t try to hold back her tears as she disembarked in Sicily along with her sisters, ready for yet another journey.

Hope and her husband were somehow luckier. They were on the same rubber boat and got rescued together by the Aquarius.

However, not everyone in the family was on board. “We have a seven-year old son,” Hope says. “He had to stay back in Cameroon with a cousin of mine.”

Hope and Steve fought for their love back home, where Hope lost both her parents as a child and Steve’s step mother was against their relationship.

“She didn’t want him to support me financially, but we married anyway," she says. "Just the traditional ceremony. Then we left.”

"Maybe one day we will be able to see [our son] again."
hope

Now 23 and 24-years-old respectively, Hope and Steve had no idea how hard their journey to Libya was going to be.

“But we did realise it on the first three days,” says Hope. “We were stuck in Niger for one week and we had to cross the desert to Algeria.”

There, the couple stayed in an abandoned house for three months, working to pay for the rest of the journey. They often went hungry and worked in exchange for food.

Once they got to Libya, they were kidnapped and thrown in a prison where men got separated from women.

“They would force male prisoners to work with no food or water and when there was water, it was salty water from the sea,” says Steve.

Women had it even worse.

“They would ask for money from us and if we had none they would rape us and do all sorts of things to us,” says Hope. “Sometimes they would even sell the girls.”

Hope had no money to pay for her freedom. She looks down as she explains she has been both a victim and a witness of rape. 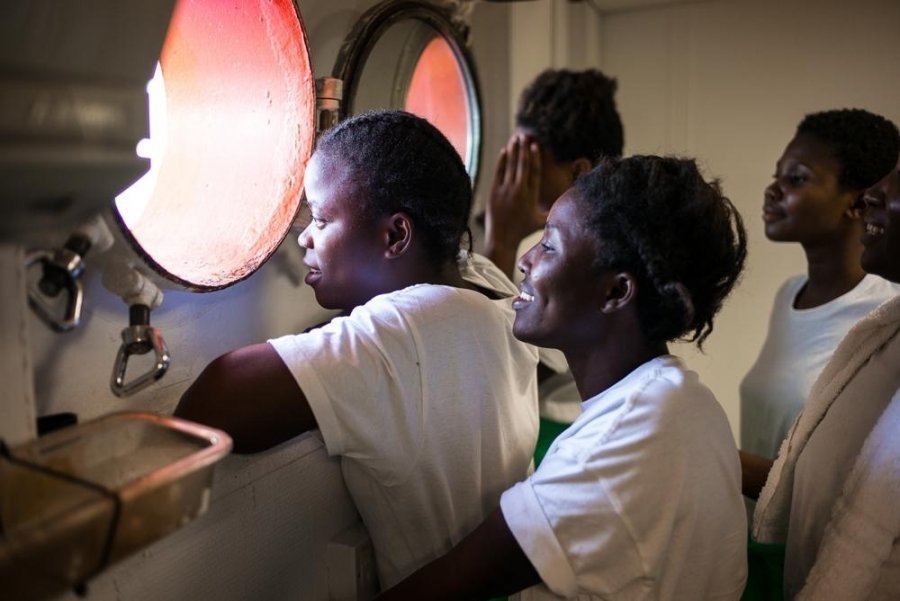 Once they finally got freed, the couple tried to embark on a rubber boat but they were taken again. Same prison, same abuses.

They were told they had to pay more if they wanted to leave Libya, so Hope called her cousin, who sent her the money they needed.

“She saved us, and she is also taking care of my son," she says. "Maybe one day we will be able to see him again.”

our search and rescue operations >