Search and Rescue: Nowhere to go but the sea

Escalating conflict and insecurity in Libya are leading thousands of people to flee, taking their chances on unseaworthy boats across the Mediterranean. On 20 December 2019, Ocean Viking rescued 112 people from a rubber boat 32 nautical miles off the Libyan coast, 21 of whom had survived a deadly airstrike on Tajoura detention centre five months earlier. Their stories, told to MSF, highlight the plight of migrants and refugees in Libya: left in limbo, caught in the crossfire of a country at war and trapped in an endless cycle of violence.

It’s the hour before dawn on 20 December – the darkest hour of the darkest time of the year – and a pale dash is just visible floating on the black sea. The white rubber boat, we discover later, has been drifting all night in international waters off the coast of Libya with 112 people on board. 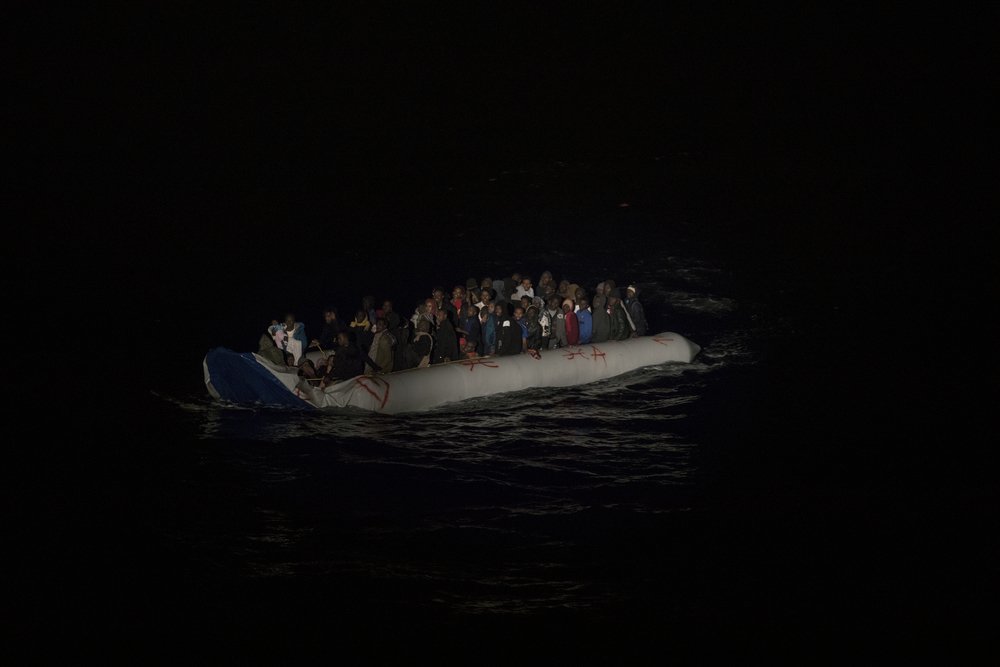 Johan Persson
Dec 21, 2019. MSF and SOS Mediterraneé onboard Ocean Vikings approaches a rubber boat in distress, 26 nautical miles south of Lampedusa. On board are 50 people, 12 of them are children.

The bow of the boat has been losing air for some time and people are starting to panic. If Ocean Viking – the search and rescue ship operated jointly by MSF and SOS Méditerranée in the central Mediterranean – had arrived just 30 minutes later, it might have been too late.

But the rescuers in their orange rigid-hulled inflatable boats are just in time. They transfer 15 people to a life raft to ease the pressure on the overcrowded rubber boat. Then, as the sky turns light, they carry out the delicate rescue operation, transporting people, 12 at a time, back to Ocean Viking.

First to arrive at the ship are the women and young children, the babies barely visible inside bulky lifejackets. Last to arrive are a group of young Somali men with elongated flat-top haircuts and bare feet, who grin in relief as they step onto the deck.

More than half of the people rescued that morning come from Somalia, and almost half of these – 18 men, two women and a baby – are travelling together. Later, dry, fed and rested, they regroup in one of the many shipping containers used as shelters and talk about where they met. 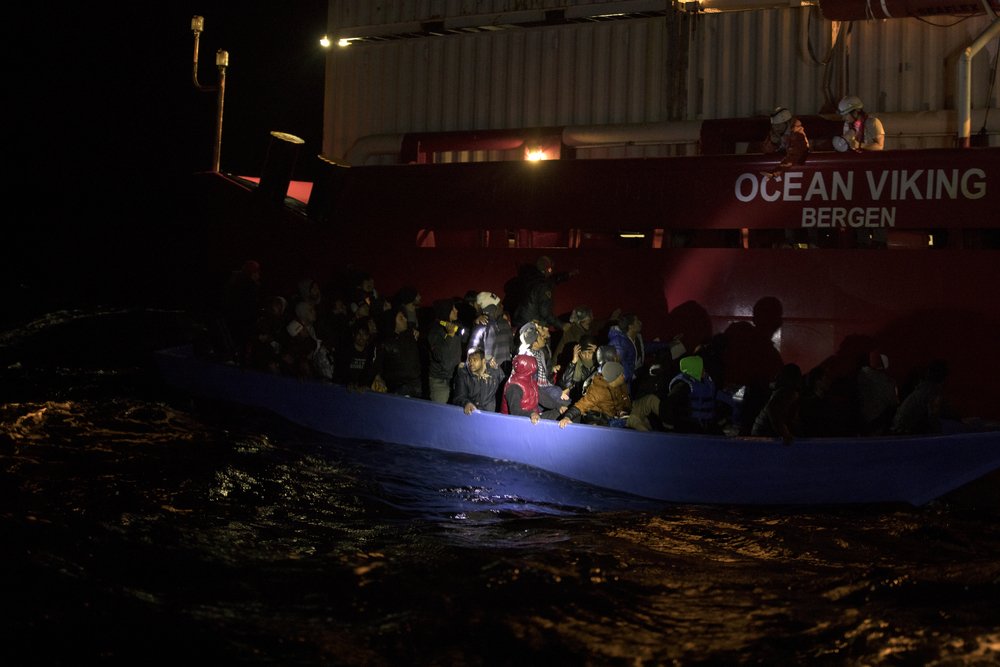 Johan Persson
Dec 21, 2019. MSF and SOS Mediterraneé onboard Ocean Vikings approaches a wooden boat in distress, 26 nautical miles south of Lampedusa. On board are 50 people, 12 of them are children.

“We met in Libya, says Hassan, a young man with a wide, heart-shaped face. “We were all together in Tajoura detention centre.”

Tajoura is one of Libya’s official detention centres, where migrants and refugees are held arbitrarily, often in dire conditions, for an indefinite period of time.

“I’m not a criminal but I was in prison [in Libya] for three years,” says Hassan. He was kept in inhumane conditions, he says, made to do forced labour and regularly punished by the guards, whom he refers to as “police”.

“There was no sunlight in Tajoura,” says Hassan. “There were women with little babies. We were kept in closed hangars, men and women separate. We were taken out to work all day and returned to the hangar at midnight. We were punished by the police. Women were taken away by police and slapped and raped.”

One of the young women, wearing a red coat and holding a small baby on her lap, nods her head in silent confirmation. 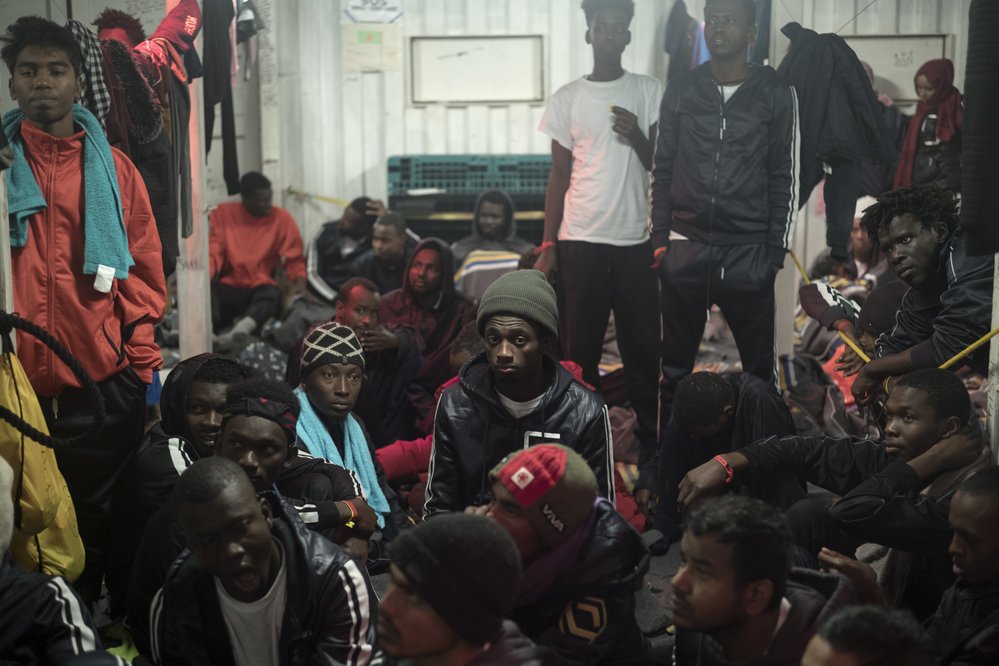 In early April 2019, conflict broke out between the forces of Khalifa Haftar’s Libyan National Army (LNA) and the Government of National Accord (GNA). In July, the frontline moved close to Tajoura, southeast of Tripoli, and both sides launched increasing numbers of airstrikes and drone attacks, including on densely populated areas.

Tajoura detention centre, located close to a military depot, was first hit by shelling on the night of 7 May, when shrapnel narrowly missed a baby. The UN’s Refugee Agency, the UNHCR, called for the detention centre to be evacuated.

However, two months later, 600 men, women and children remained locked up in Tajoura detention centre when it was hit by two airstrikes on the night of 2 July. At least 50 people were killed immediately. It was the deadliest incident for civilians since the onset of the conflict.

“The first airstrike was near to the hangar where I was,” says Faduma, the young woman in the red coat. “When it happened, the doors were closed and it was dark. No one came to open the doors, no one came to help us.”

According to official reports, the victims of the airstrike that hit the men’s hangar were mainly men, but the women’s hangar was also damaged by the blast. Faduma says she was wounded, and both she and Bilan were taken to hospital. 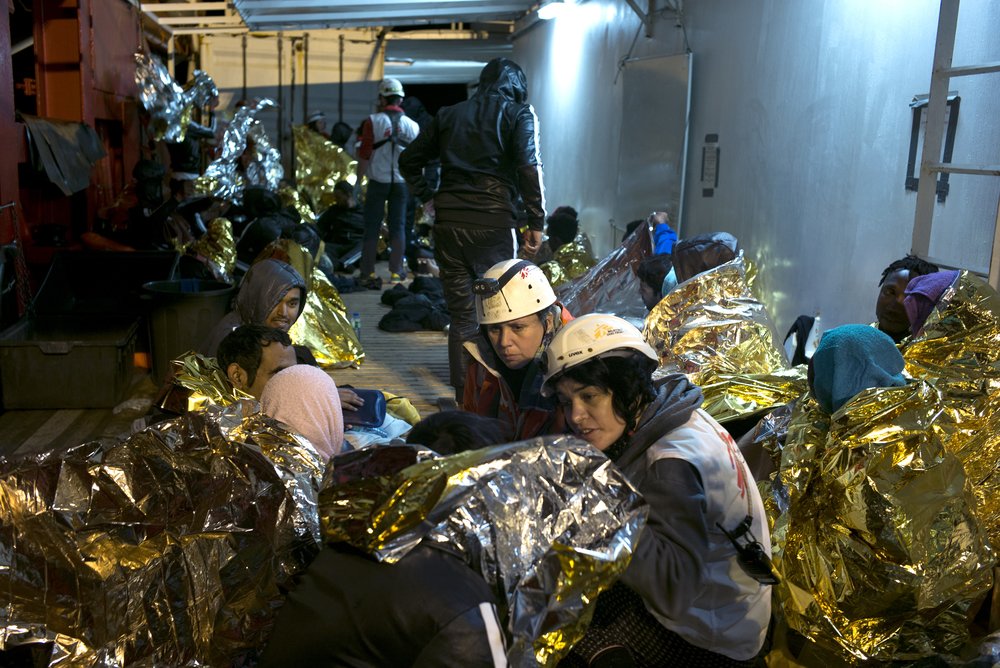 Johan Persson
Dec 21, 2019. MSF and SOS Mediterraneé teams rescued a wooden boat, the rescue ship Ocean Viking was 26 nautical miles south of Lampedusa, when the rescued took a place. After the rescue that was the second that day, 50 people, 12 of them are children got on board Ocean Viking.

A woman pregnant with twins, who was rescued in October by Ocean Viking, previously described to MSF staff how she nearly miscarried after finding the body of her husband, who was killed in Tajoura detention centre that night [VIDEO Fatouma/Nov 2019].

Many of the survivors were left psychologically traumatised by their experiences, as witnessed by MSF teams in Libya, who provided them with psychological first aid in the days following the bombing. “There were people who got crazy after the airstrike happened,” says Faduma.

Fifty-three people are known to have died in Tajoura that day, according to the International Organization for Migration (IOM), but the survivors rescued by Ocean Viking report that the number of deaths was almost double that.

“Many people died in Tajoura – more than 100,” says Hassan. “In that hangar there were more than 105 people. All the people who died, I knew them.”

After being discharged from hospital, both Faduma and Bilan were taken to the UN’s gathering and departure centre (known as the GDF) in Tripoli – set up in 2018 as a transit centre for vulnerable people waiting to be relocated.

Other survivors made their way to the already overcrowded GDF in the days following the bombing but, according to this group, were not allowed into the centre, despite being extremely vulnerable. 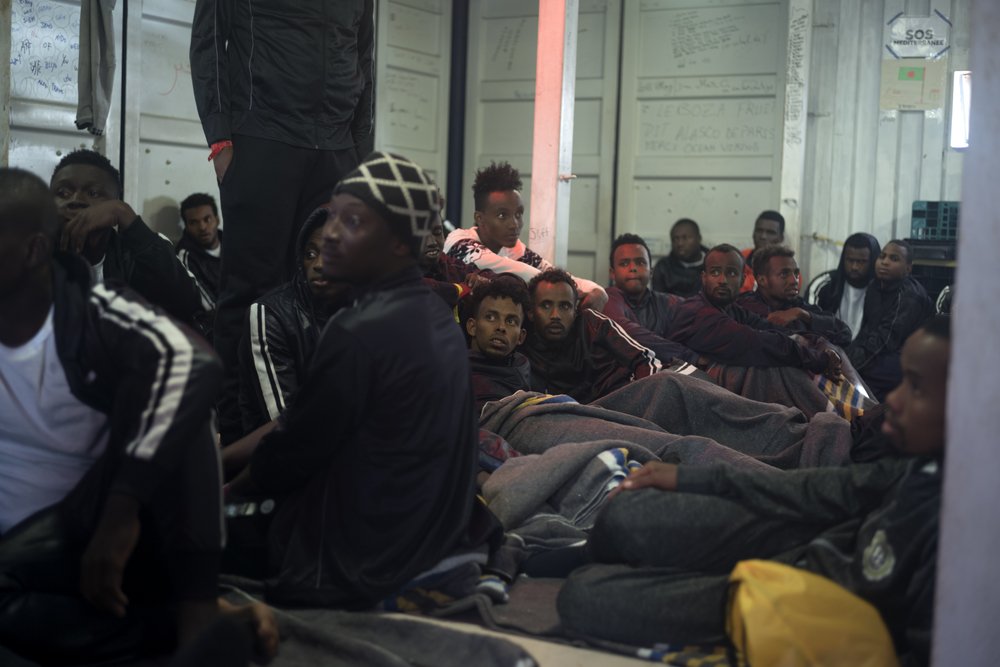 “There were people in Tajoura with no father, no mother, no family, no nothing, living in the prison [detention centre]. The UNHCR rejected them,” says Bilan. “They said we were not going anywhere.”

According to this group, only 45 survivors of the airstrike were allowed to stay in the GDF and await relocation. The others had to leave the centre and fend for themselves on the streets of Tripoli. Faduma stayed in the GDF for four months, but eventually she too had to leave. Hassan describes how desperate they all felt, with “no help, no work – they don’t know where to go, they don’t know where to move.”

In the past nine months, as the conflict has escalated, more and more migrants and refugees have been left to fend for themselves on the streets of Libya. A handful of Libyan official detention centres – including Khoms, Karareen and Qasr Bin Gashir – have been closed down, while people intercepted at sea and returned to Libya by the Libyan coastguard are increasingly being left to cope without assistance.

On the streets, they run the risk of being abducted by criminal gangs, people traffickers and militias and taken to unofficial detention centres, where they are exposed to physical violence, forced labour, extortion and being sold on to people trafficking networks.

“The Somali people [face] troubles in Libya,” says Mahad, an older man in a green shirt. “Somali people can’t walk around inside the city because they get caught by smugglers. The GDF was a safe place, so how can they survive outside, who’s going to help them?”

Feeling they had run out of options, this group of Somalis decided to try and cross the central Mediterranean in a smuggler’s boat, despite the risks.

In 2019, according to IOM, 753 people – or two people every day – are known to have died or gone missing in the central Mediterranean, the world’s deadliest migration route.

Leaving Libya by sea was fraught with difficulties. Hassan made four separate attempts, but each time his boat was caught by the Libyan coastguard and he was forcibly returned to Libya, a country engulfed in war. The Libyan coastguard is trained and funded by the EU.

Hassan says that people at sea are also intercepted by traffickers, who return them to Libya and then sell them on to other traffickers.

“Libyans [criminal gangs] abduct people from the sea,” says Hassan, “and lead you back into Libya, to a prison. Then he will sell you. The smuggler will come and say: ‘I need 10 persons. Bring me out 10.’ In front of you he will say: ‘These 10 are yours, take them.’ It’s a slave trade.”

The noise level in the shelter is rising. Everyone is talking at once about the horrors, the dangers and the indignities to which they were subjected during their time in Libya. Their urgent voices compete with the sound of Arabic singing and West African drumming as the people on deck celebrate their rescue. During that long night in the deflating rubber boat, people say, they were convinced they were going to die.

Faduma raises her voice to be heard above the din. “You know that in Somalia there have been conflicts and wars for years,” she says. “This is why we escaped from Somalia – this is why we were looking for a way to get to Europe. But the experiences we faced in Libya were far worse than anything we went through in Somalia.”

Faduma and her companions have survived a conflict in their own country, a difficult journey, detention in Libya, a deadly airstrike and a dangerous voyage across the Mediterranean. Eventually, two days after being rescued by Ocean Viking, Italy agrees to offer them a port of safety.

Waiting to disembark in the southern port of Taranto, the Somalis look expectant and anxious. The once raucous, swaying deck is hushed and still. One by one, clutching bags holding their few possessions, the rescued people step off the gangway. They make their way towards a crowd of officials wearing facemasks and protective suits, a tented city set up hastily on the quayside, and the chance to start a new, safer life in Europe.

In the past week, at least 1,100 people have attempted to escape Libya across the Mediterranean Sea. Of these, 602 people – including many women and children – have been intercepted and forcibly returned to Tripoli by the Libyan coastguard. Meanwhile, MSF teams on the ground in Libya report renewed fighting and heavy shelling. With growing insecurity and no safe place to go, how many more people will have no option but to risk their lives on an unseaworthy boat on the central Mediterranean?

All names have been changed.