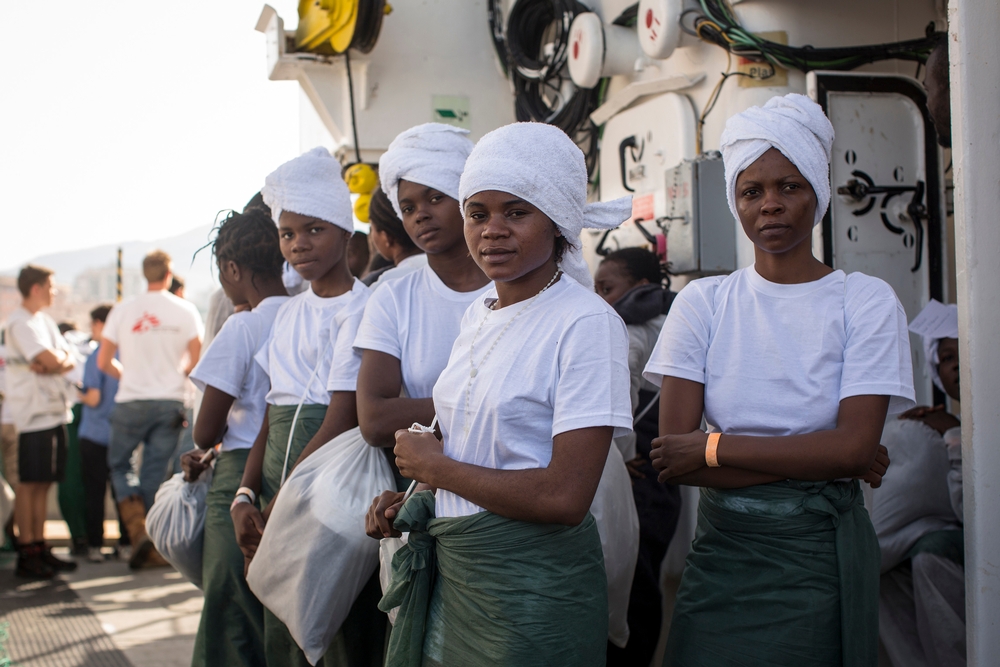 Search and Rescue: "You could see in their eyes the way they died"

On Wednesday 20th July the MV Aquarius, a search and rescue vessel run in partnership between Médecins Sans Frontières (MSF) and SOS MEDITERRANEE was called to the scene of a rescue of two rubber dinghies north of Libya.

Dr Erna Rijnierse approached one of the dinghies to asses the medical situation of those on board. What she found was deeply disturbing.

"We got a call from the MRCC and were told that there was a helicopter doing a medical evacuation and we were needed to assist in a rescue.

At that point we didn’t know that a navy vessel had already disembarked about 48 people from a rubber boat. So there was  a lot of things we only found out about a bit later.

I and another of the team members had a bad feeling about this, and it turned out that we were right.

So when we approached the rubber boat, the first thing we noticed was the silence. Normally, when you approach a boat the people wave and let you know that they are there, but this time, they were awfully silent.

The other thing we noticed almost immediately was the very strong smell of fuel. When we approached the boat, they told us there were dead bodies inside.

They didn’t tell us how many. When we got close to the boat, we noticed that they didn’t have proper lifejackets on, so we distributed them immediately.

I asked permission to get onto the boat, the water was up to my calves. The smell of fuel, urine and other things was incredibly strong. It was very hard not to step on a human body.

I wanted to make absolutely sure that the women, it was clear to me at this point that most of them were women, were really beyond the point of resuscitation.

I just did a quick assessment to make sure that the women were really dead. Some of them were already stiff, so rigor mortis had set in.

It was clear that they didn’t die in the last few minutes and you could see in their eyes the way they died, they were struggling.

From a medical point of view, it was clear that there was nothing we could do, so I went back on-board the rescue rib to focus on the ones who did survive this ordeal.

There were a lot of people on-board the boat who suffered from stinging eyes which was probably due to the gas or fuel, and it became apparent that there had been a struggle taking place on the boat.

You can tell this from the nail scratches on peoples arms and legs, but also we had ten people present themselves with human bites on their arms, back’s, lower back’s and ankles.

To me, that’s somebody who has lied down flat on the floor and has been stacked upon, without being able to do anything about it. It’s horrific to imagine that scenario, it must have been chaotic.

People were just staring with empty eyes into nothingness. People on board are severely traumatised by these events, but it’s not only their journeys in the Sahara or the horrific stay in Libya, what they’ve encountered here has been beyond most people’s imagination.

Donal Gorman/MSF
MV Aquarius disembarks 209 people and the dead bodies of 21 women and one man in Trapani, Sicily on the 22nd July 2016

Later on, we recovered the bodies, which was not easy.  Twenty-two in total. Twenty-one women and one man. What we do is to take pictures of each and every individual. We give their estimated age and other details, to be handed over to the Italian authorities.

But, what’s really sad is that there’s only one person who has been positively identified, they have to be reunited. They have died an agonising death, you can see that in their faces.

Some of them have protruding tonsils because of the suffocation process. It’s also difficult for people to recognize their loved ones when they are in that state.

We have one positive identification of a man who has lost his wife in this incident, there is also a person who has travelled with one of his relatives, but because of the state of the faces, he couldn’t even identify his family member and unfortunately doesn’t come from a country where his dental records or DNA or whatever recognition processes are in place.

anna psaroudakis/SOS Mediterranee
The search and recue vessel, a partnership between MSF and SOS Méditerranée, responded to a boat in distress on 20th July 2016

What we are hearing is that the girls were travelling from Nigeria and that some of them met while travelling along the way.

We are hearing stories of them being at the bottom of the boat between the wooden floor and rubber bottom gagging on swallowed dirty fuel-water.

Many of the girls were coming after having spending some time in detention, so were very weak to begin with. They didn’t eat or drink properly. So how can you physically fight if you are weak.

So it’s been horrible. What we need to do is to focus on the ones who have survived and care for them.

We’ve called in a psycho-social team from MSF in Italy who work on the shore who are prepared for these sort of situations and will meet us tomorrow in Trappani, where we will hand over the dead bodies to the Italian authorities.

anna psaroudakis/SOS Mediterranee
"They are just staring with these empty eyes into nothingness for hours and hours. It's been horrific. These things shouldn't happen. It's 2016. It shouldn't happen anymore." - Dr Erna Rijnierse

What is difficult and even disgusting to me is that these girls died a horrible death and only for the reason that they have no other way to get to Europe.

I find that appalling and very difficult to deal with.

Of course it’s difficult to look face to face at a dead person, but it’s even more difficult when you have to try give some sort of identification to a girl you will never talk to, you will never know their history or who will miss her.

Because you will have no way of identifying her, that makes it even more personal to me. I was furious yesterday. I was angry at the policies that keep everything at arm’s length.

These girls could have bought an airplane ticket and had a very safe comfortable journey and still have paid half the price for what they paid for this doomed crossing.

They shouldn’t have to cross the desert or be in forced prostitution or whatever situation they find themselves in. They have to board an unfit vessel in the middle of the night to then drown in the sea because they can’t do it any other way, and that whole sequence makes me furious with anger.

These  people have committed no crime but to cross the sea. They were not sick. They were normal people with their whole lives ahead of them."

Find out more about MSF's work at sea