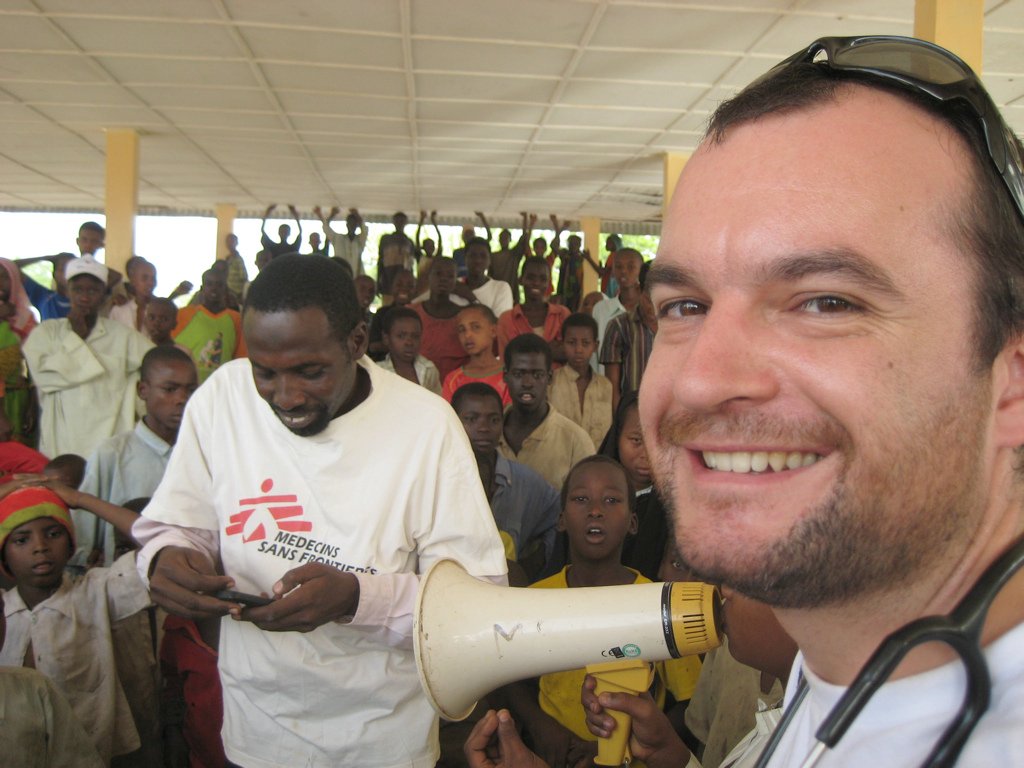 Security measures are tough but worth it

IN THE FIELD: The work is tiring and stressful but very rewarding, writes Dr John Morris

‘BASE, BASE for Tango 2. Base, base for Tango 2.” The radio crackles for a few moments before the operator replies, “Yes Tango 2, base here, I copy, over”. It’s just after 2am and I’m responding to an emergency call from the paediatric ward.

The recent whooping cough outbreak has left another young girl seriously ill and when she arrived our nurses called me straight away. “Yes base, Tango 2 is leaving the house in the direction of the hospital, copy?” “Copy Tango 2, who is on board, over.”

“On board are John and Charlie, copy?”

The Charlie factor confused me for about a week, to be honest. Unaware that Charlie was radio code for chauffeur (driver in French), I had a hell of a time trying to work out which one of the drivers was Charlie and when I would ask they would, of course, politely reply, “Yes – I am Charlie”.

Four minutes later after travelling the 1,000m to the hospital a similar communication can be heard to confirm our safe arrival.

Security in Am Timan is tight to say the least. In fact, in Chad in general, security takes precedence over every other aspect of expat life. As expats, working in an area like south eastern Chad poses certain risks. Among them include being shot at, abduction, armed robbery, rebel-military crossfire, rape, carjacking as well as verbal abuse and harassment. And these are not just notional threats. These are the threats that have been realised here for expats and national staff in Chad in the past and still exist today.

They are also threats which the community we are serving have faced long before we arrived and will continue for as long as insecurity exists and tensions exist between tribes, between ethnicities and between countries. It is only 18 months since an MSF volunteer was abducted about 288km from Am Timan and we are only a couple of hundred kilometres from where an Irish aid worker was abducted in Darfur around the same time. The timing of the airing of a documentary on her abduction a week before I left home did nothing for my nerves, or those of my family.

At my security briefings in the capital N’Djamena shortly after I landed in Chad, I was asked to fill out my “proof-of-life” document. This contains a handwriting sample and five questions that only I know the answers to. I really hope I never get asked those questions. In fact, I also really hope I remember the answers if I do get asked! Hopefully they will remain sealed until I finish my mission and I will have the pleasure of destroying them before I hop on the Air France jet to Paris, when I head back home.

Of all the threats, the one impacting most on my day-to-day life in Am Timan is carjacking. The “Tango 2” referred to in the radio conversation is not your typical, imposing, white MSF Landcruiser adorned with red logos, a flag flying from the huge radio antenna and multiple no-weapons signs.

Oh no, Tango 2 is one of our four-strong fleet of bright pink Suzuki Jimnys! Yes, we drive the “roads” of Chad in a vehicle that MSF reckons no self-respecting rebel would be seen dead launching an attack in. So many Landcruisers were stolen by rebels over the years in Chad that MSF decided enough was enough.

The “clowns emerging from the tiny car” scene plays over and over here every day. Besides that there are other obvious impositions on our day-to-day lives. All movements by foot in daytime must be in pairs – so no stroll to the river to watch the sunset alone. No movements outside of the compound after dark, except to the hospital and only by car, so no sneaking off to the local for a pint! We carry radio handsets at all times and have a safe room which can accommodate 12 expats for 10 days, should the need arise. And no, you shouldn’t ask about the toilet situation.

So it’s a medical life, but not as I knew it. The security measures can seem both protective and oppressive in equal measure. However, I would not feel comfortable working in a place such as this without those security measures in place . . . All of the security measures we take in the field, such as the radio calls, curfews and movement protocols, are there for a very good reason, and so far in Am Timan we have not had a serious security incident.

And despite all that, here we are. This is one of only a few organisations working in this region of Chad. In many ways we get the sense that Chad is a forgotten crisis. Security threats have a significant impact on what we can do, of course. For the population of the surrounding areas it means that our movements are limited and we can’t always access some of the outlying villages to provide the care we would like.

It means that the main body of my work here, which is to establish MSF HIV/Aids and tuberculosis (TB) treatment programmes, has to be planned with the volatility of the security situation in mind. If fighting breaks out and the population is displaced, how do we maintain a supply of drugs to the patients? If MSF is forced to evacuate staff because the security threat is too high, who will run the programmes?

It is for that very reason that so much of our work is based on teaching and training. Especially when it comes to diseases like HIV/Aids and tuberculosis, avoiding gaps or breaks in the treatment is vitally important.

Until recently many in the world of international healthcare believed it was impossible to deliver a long-term programme of care for TB/HIV in a setting such as Am Timan, but after seeing the results of pioneering programmes in other “resource-

limited settings” such as Haiti, MSF is attempting to integrate TB/HIV care into as many of our programmes as possible.

The real key to MSF’s ability to work in precarious security situations such as this is our proximity to the local population. By delivering vital medical services to a vulnerable population we form a strong sense of community partnership.

Those who benefit, which is a huge portion of the local community, are the same people who realise that should any harm come to the MSF mission, we may be forced to leave. We rely on the local community to inform us of dangers and protect us from threats which may lurk around the corner.

We maintain good communication with local authorities and respect local culture and customs. But, most importantly, it is through providing a high quality service that this community partnership can be achieved.

We constantly strive to raise the standards of ongoing healthcare here, as well as providing all the necessary emergency interventions. We supply not just knowledge but manpower, materials and medications.

It is not easy to be a medic under such circumstances but the impact of what MSF is doing is so visible and tangible that it helps us all to persevere and gives us more of a sense of security in a volatile situation. The work is tough and tiring and stressful and yet, hugely rewarding.

Dr John Morris is a GP from Galway, and was president of the Irish Medical Organisation from 2009-2010.