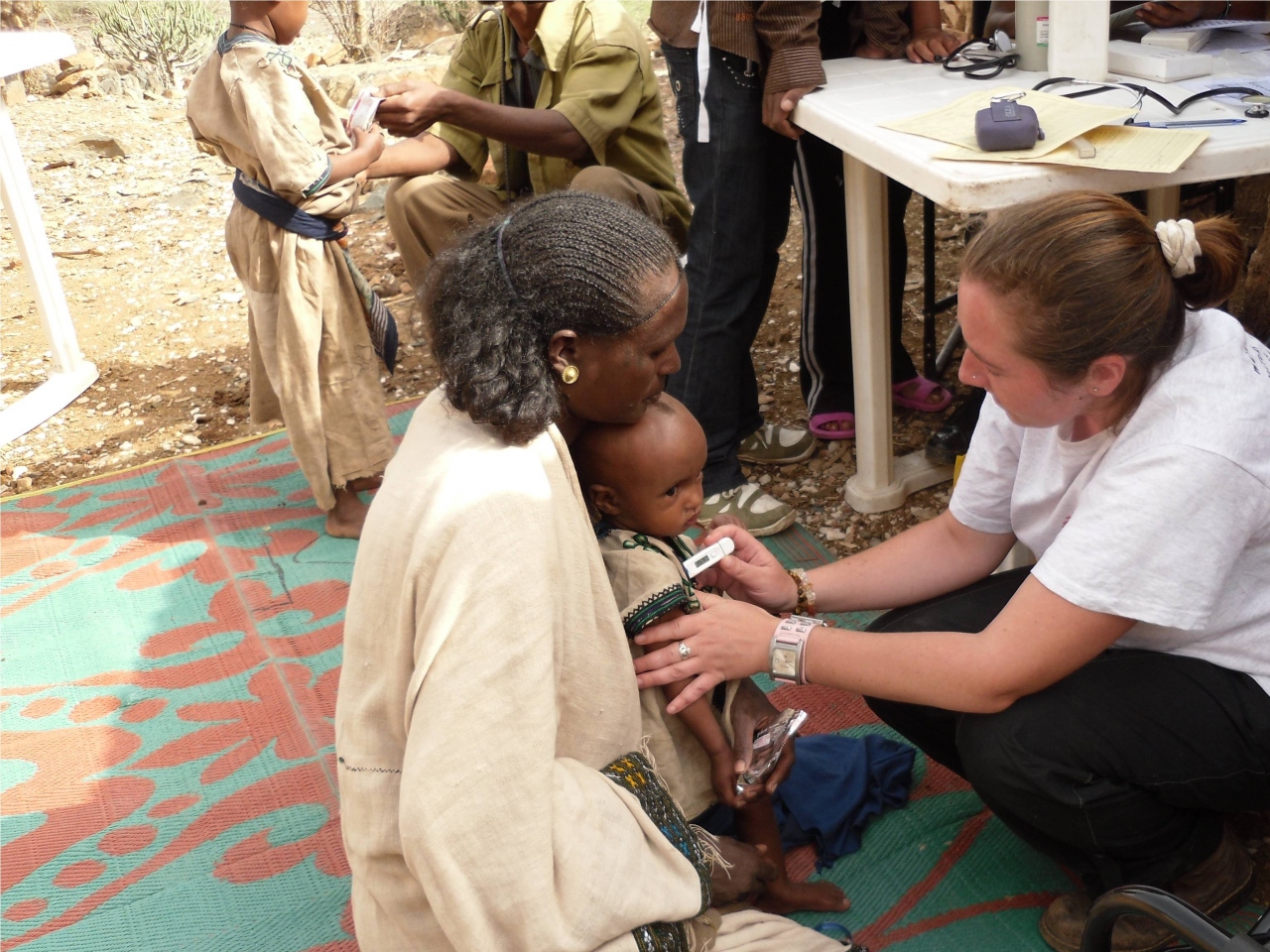 Seeing the Children Spurs Me On

Niamh Ryan talks to Womans' Way about the good and the bad days working in Ethiopia. This article appeared in Woman's Way on 16.08.10, written by Angharad Williams.

Niamh (with rucksack) heading on outreach in northern Ethiopia

In the past 12 months, young people have left Ireland in search of work in search of opportunities that aren't available in Ireland because of the recession. Most pop over the Irish sea to cities including London, while some have ventured further afield to the warmer weather down under. Some have had a career change and done things they never dreamed of and others have been inspired to follow that dream they never thought possible.

The explorer spirit is nothing new to the Irish and Niamh Ryan from Limerick is a perfect example of someone who has left Ireland through charity work. "It was definitely a major culture shock," she said of the first time she arrived on African soil. "At the time I really thought about not unpacking my rucksack but leaving instead, I didn't think I could last it. For many years I have had an interest in Africa and always wanted to do volunteer work there.  I admired the people who are working in often difficult and poorly resourced countries." So with them in mind, Niamh went to Uganda to do development work for an Irish NGO and found life very different to what she was used to in Ireland

Niamh checking a baby's temperature at the outreach centre

"In my first placement in Uganda I had to draw water from a well, lived in a mud hut without electricity or a generator. It took about two hours walking to reach the roadside to get a bus to the town 20km away, so some adjustments are required. You need to accept your situation and get used to living in difficult conditions without any comforts. But, I surprised myself and now I enjoy Africa and love the work that I’m doing with Médecins Sans Frontières."

It was while she was working in Uganda that Niamh first discovered the medical and humanitarian aid organisation Médecins Sans Frontières (MSF). "I worked and lived near the MSF office and became curious about the kind of work that they were involved in," she explains, "as I had heard about them but didn't know any details. I researched MSF and was attracted to the idea of emergency volunteering."

So through MSF she came to be working in Ethiopia, supporting a nutritional programme in different places around the country. "My placement in Ethiopia was even more remote then the one in Uganda. I flew from the capital to the tourist town of Gondor. From there it took us two days in the 4x4 to reach the village of Dejac Meda, north of Ethiopia. There were no proper roads - in the better parts we had the luxury of dirt tracks, and for the remainder we had rocks and large riverbeds. To cross these riverbeds was virtually impossible because huge boulders blocked our path and we often built up roads with stones and rocks to make these riverbeds accessible. Depending on the riverbed these could take a few days, or if we were lucky we could complete it in a few hours with help from the locals. If we couldn't cross a river we had to find a clear spot to put your head down for the night in our sleeping bags.

"We had eight outreach posts which we travelled to every fortnight. It was equally difficult to reach them, some were accessible within a few hours’ drive around the different mountains, but there were three extremely difficult ones, involving many hours of hiking and struggling to reach our destination. One of these outreach posts took two days to reach within the mountain. We examined all children under the age of five and assessed them for malnutrition and we set up an in-patient centre.  There are two categories of malnutrition - moderate and severe. The moderately malnourished children could be treated in their homes, but the severely malnourished children needed to be admitted to the in-patient centre beside our base compound. These children required constant monitoring and evaluation of their feeding progress, we started off giving them a special milk to try and stimulate their appetite before eventually progressing to the therapeutic food.  Some patients who were not responding to this treatment would need to have further investigations for possibly underlying disease as HIV and TB which are so prevalent in many African countries. While it was a hugely challenging project it was also extremely rewarding and enjoyable."

Seeing the Children Spurs Me On

Niamh works for the Mater Hospital in Dublin and is currently on a career break from her position of intensive care nurse and although her work in Ethiopia has been challenging she has loved it; "Seeing the change in some of the children, even in the space of a fortnight once they start the feeding programme, has been the definite highlight.  This is usually enough to spur me on and always keeps me interested in the work we are doing. Training local and national staff is also both enjoyable and rewarding." Niamh plans to return to Dublin, but she still has time for a few more adventures. "I have another year of my career break after this so will probably do another mission with MSF."

Niamh - climbing a mountain as part of her 'commute' to work

About Médecins Sans Frontières
Niamh is one of fifty Irish volunteers from a range of backgrounds, from doctors, nurses, engineers, accountants, project managers, human resources specialists, who work with MSF across the globe.  An international organisation founded in 1971, MSF opened its office in Dublin in 2006.  MSF Ireland welcomes applications on an ongoing basis. While previous overseas experience and other languages are assets they are not always necessary.  However applicants must be genuinely passionate about helping people most in need.  For further information, see www.msf.ie/workwithus or call 01 660 3337