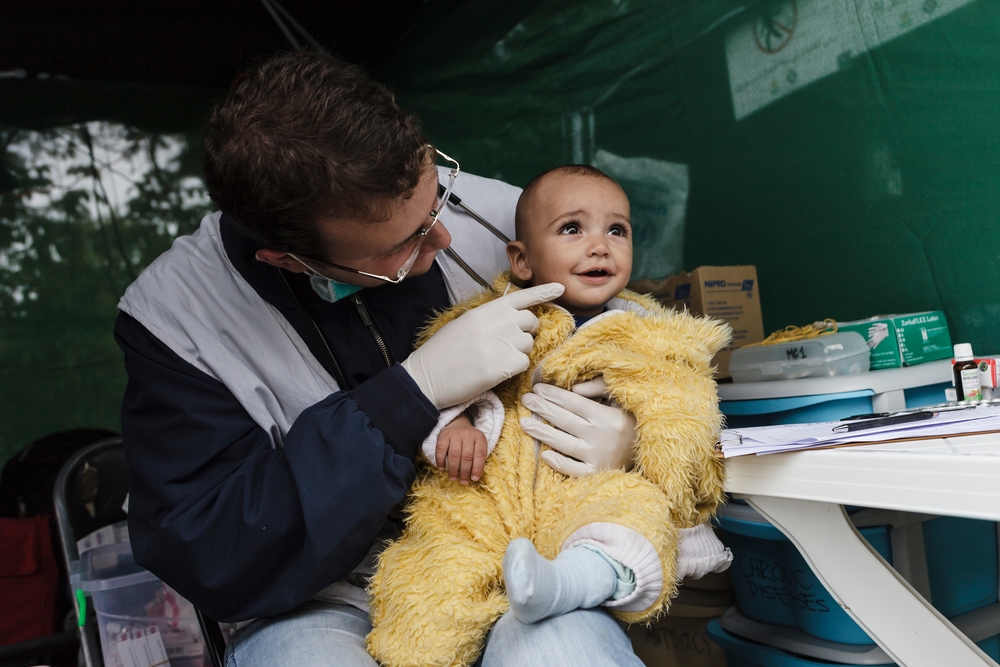 Serbia: “Our children were shaking with the cold”

Mohammed, an accountant from Idlib, Syria, travels with his extended family, they came to MSF’s mobile clinic at the Serbian border with Croatia on Friday 25 September as the children were suffering from colds.

Mohammed is making the journey from Syria with his wife Bayan and brothers Obaida and Abdullah are travelling from Syria with their cousin Suha and her two children, Waleed, 5 and Leen, 4.

The group spent the night and most of the next morning stranded in no man’s land between the borders alongside another 800 people. At night there was a heavy thunderstorm and limited shelter available for the family.

Achilleas Zavallis
Mohammed and his extended family from Idlib, Syria.

My wife and I were married a month before our journey. We want to have a family one day, but I knew we would not be able to travel with a new baby. We left our country because it was no longer possible for us to live there safely – we have stayed through four years of war.

Before the war, we were very happy in Syria. It was a safe and beautiful country with a Mediterranean climate. Many Syrians have already lived in Europe, but they always wanted to move back – everyone loved living in Syria.

I worked as an accountant and so did my brother Obaida. Our parents are still living there and we hope that we might be able to bring them to visit us. It wasn’t possible for them to make this journey.

Sea crossing from Turkey to Greece

The hardest part was the sea crossing from Turkey to Greece. The waves were really strong. We tried to tell the children that it was like an adventure to try to keep them calm, but it was very dangerous.

A wave crashed over the side and my clothes were completely soaked through. My brother had to sit me down in the boat and wrap me in blankets. I was shaking for an hour.

We traveled through Greece and Macedonia, before crossing into Serbia yesterday. We reached the border with Croatia at around 9am. We were told that it would be two or three hours before everyone would be moved from here. We waited and waited.

Some buses took people back to Serbia but most of us were stranded and had to sleep here. We’ve never slept outside before – this was a first for us.  Unfortunately it started raining – it was like a tropical storm and rained continuously for three hours.

Thank god for the plastic sheeting. Most of the families received some sheeting to sleep under, but a lot of the single people, maybe around 200, didn’t have any at all. They slept in the rain. There was thunder and lightning for three hours and the children were shaking with the cold, but also with fear.

They already had colds and now my brother has got the flu. Our medical problems have mostly been because of the wind and rain. We are all very tired, and the children are cold and hungry.

Safer for people to reach Europe

They need to put a camp here or some shelter, or at least to make their procedures faster. We need to finish our journey as soon as possible and not be stuck at every point. We suffer with every country that we pass through.

We hope they can make the procedures faster and safer for people to reach Europe – especially for families. If I was young and alone it would not be as difficult, but with a family it is different and there is no provision for those travelling with children.

We have not chosen which country we want to move to yet – perhaps Germany or Sweden – we are trying to decide where would be the best place for us. What we are looking for is somewhere where we can speak the language, so we can get a job.