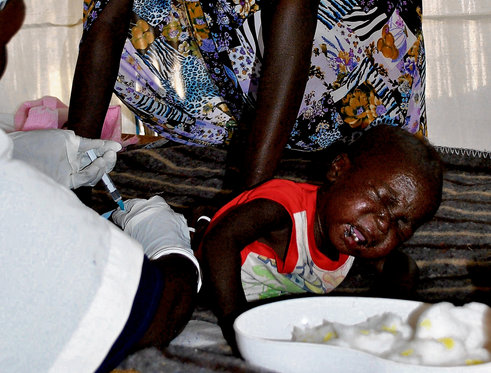 This article appeared in the Irish Times on 04.01.11 written by Jody Clarke in Malakal.

SOUTH SUDAN is suffering from its worst outbreak of kala-azar in eight years, with cases set to peak as returnees with no immunity to the disease arrive ahead of an independence referendum on January 9th.

Patients, their feet swollen from the parasitic bite of the sand fly, limp into Malakal’s teaching hospital in Upper Nile State.

The spread of the disease is currently under control, after a team from Médecins Sans Frontières (Doctor’s Without Borders) arrived in November, reducing the death rate from 25 per cent to under 5 per cent. But they could peak again, as tens of thousands of southerners return home after years working and living in the north.

“The transmitting season is over now that the rains have stopped,” says Médecins Sans Frontières (MSF) doctor Daniel Zimmerer. “But the worry now is that as returnees come back, it will get worse. They have no immunity to the disease.”

In the stadium 2km from the town’s centre, 800 recent returnees from northern Sudan wait to be processed before they get to their home towns. More than 10,000 have passed through in recent months, putting pressure on a health system that is already creaking after years of war.

MSF has had to bring all its medication in by air because there are few roads to transport it. This means many people have to rely on the river Nile to bring them to hospital or clinics, a journey that can take days.

Soldier Alex Ale (35) was carried for two hours up river from Owach. Sitting at the end of his bed, he touches the floor for the first time in three days. “I couldn’t walk. When I tried, I would fall so I had to be supported by people all the time, ” he says. “I was always shivering and my mind was not well but finally I’m getting better.”

He is one of the lucky ones. For many, making it to Malakal is an impossible task. South Sudan has one of the highest maternal mortality rates in the world, with 2,000 women dying in every 100,000 births. In a region of 8.2 million people, 1.2 million children depend on food aid, and 40,000 are treated for malnutrition every year.

“Outside of cities and towns there is little access to healthcare centres, as there is no infrastructure” says José Hulsenbeck, MSF’s head of mission in south Sudan.

“You either go by foot or by plane, which means many health staff are not willing to work in these places.”