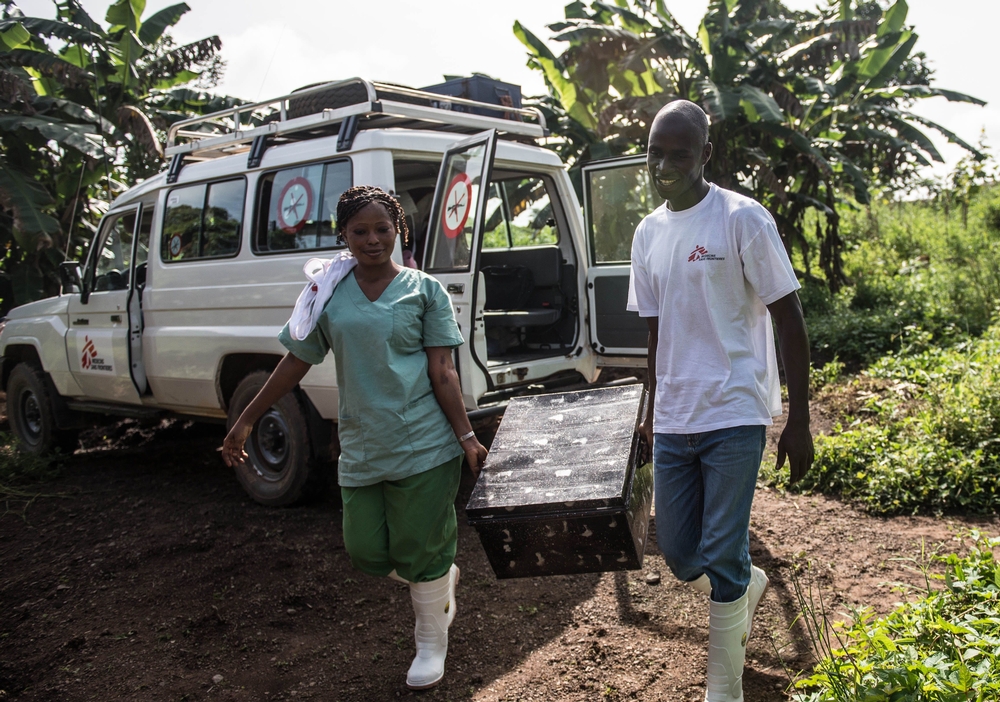 After 42 days with no new cases of the disease, the outbreak of the Ebola virus was officially declared over in Sierra Leone on 7 November. This positive news marks a milestone for the country, where the outbreak which lasted 17-months claimed the lives of nearly 4,000 people in the country.

MSF was one of the first medical organisations to respond and over the course of the outbreak, we set up and ran 4 Ebola management centres and 1 maternity centre, helping more than 860 people to recover from the deadly virus in the country.

Sierra Leone can now look forward to a period beyond the fear associated with the disease.

While MSF welcomes this positive news, a number of new cases of the virus have been discovered in the neighbouring country of Liberia.

These new cases indicate that this unprecedented epidemic is not yet over, and further efforts are required to put a halt to this outbreak.

Despite the scale of the epidemic, there is still much that we do not know about Ebola.

How long does the virus survive? Could Ebola become endemic in the region? What medical challenges do survivors face? 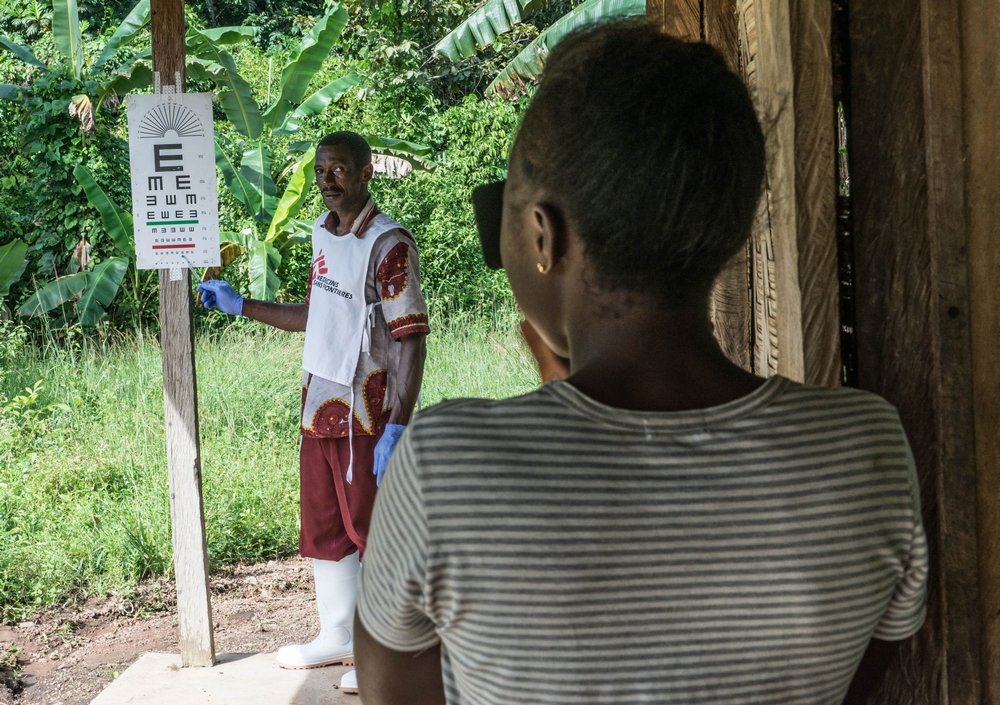 Health promoter Joseph Fofana conducts an eye test with an Ebola survivor during a MSF outreach mission the village of Mabekoh. Many Ebola survivors still suffer from physical, social and psychological problems after beating the virus.
.

This time last year, #SierraLeone was at the peak of the #Ebola outbreak. Today, the MSF team celebrates zero cases. pic.twitter.com/2NSLwdECDV

There are two possible routes to a disease like Ebola becoming endemic.

First, there could be a lot of ‘late cases’, with people infected through sexual transmission – but we haven’t seen that happen.

Most of the male survivors of a sexually active age had the disease a year ago. So if sexual transmission happened to a significant extent, we would have seen many more cases.

Secondly, the virus would have to adapt well to its new host.

Viruses that have successfully emerged from their animal reservoir to become endemic in humans – such as HIV and measles – have often come from animals that are evolutionarily close to us.

The Ebola virus, however, started with bats and is not well suited to human beings, and compared to other pathogens, it does not mutate quickly.

Also, the way the Ebola virus causes disease in humans is not conducive to it becoming endemic.

Unlike other viruses, it doesn’t spread easily to casual contacts – for example, it isn’t transmitted to people passing in the street, like influenza.

Instead it spreads through unsafe burials and caring for sick patients. When the risks are understood, and when the end of the chain of social networks is identified, the disease can be stopped in its tracks.

That’s how the Ebola epidemic has been brought to a halt in other countries. 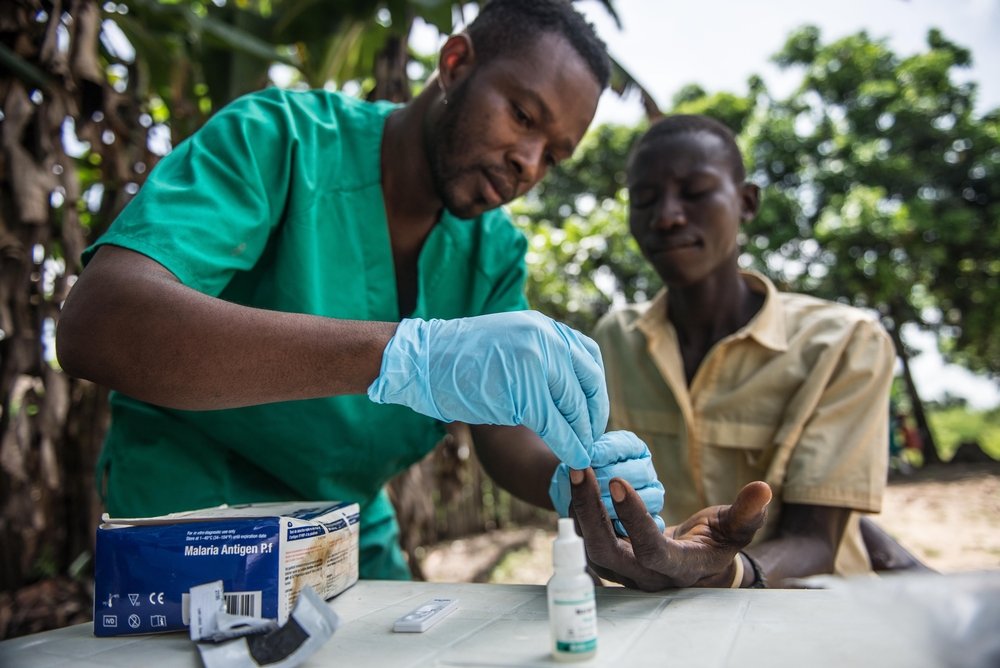 Community Health Officer Ishaka Kpaka conducts a malaria test on Ebola survivor Ibrahim bangura during a MSF outreach mission to Kumrabai village. Many Ebola survivors still suffer from physical, social and psychological problems after beating the virus. Isatu lost her father to Ebola and has been left with eye problems.

Can the virus survive after a patient has been cured?

Among the 27,000 cases of Ebola registered so far, we have observed a few ‘late cases’ in which the virus has embedded itself in sites in the body where the immune system is less present, for example in the testes, brain and inside the eyes.

Most of these sites are not locations where the virus can easily spread outside the survivor to infect others, semen from the testes being the one exception.

But these events are rare, and there are not enough of them to generate many new cases.

These cases show that there is a potential residual risk from survivors, but at the moment it is not quantifiable.

In any case, focusing on the risk posed by survivors could be very misleading and take attention and resources away from more generalised surveillance.

It is crucial to maintain a surveillance system which is not solely focused on the potential transmission from survivors. Science should now be at the service of Ebola survivors and not the other way around. 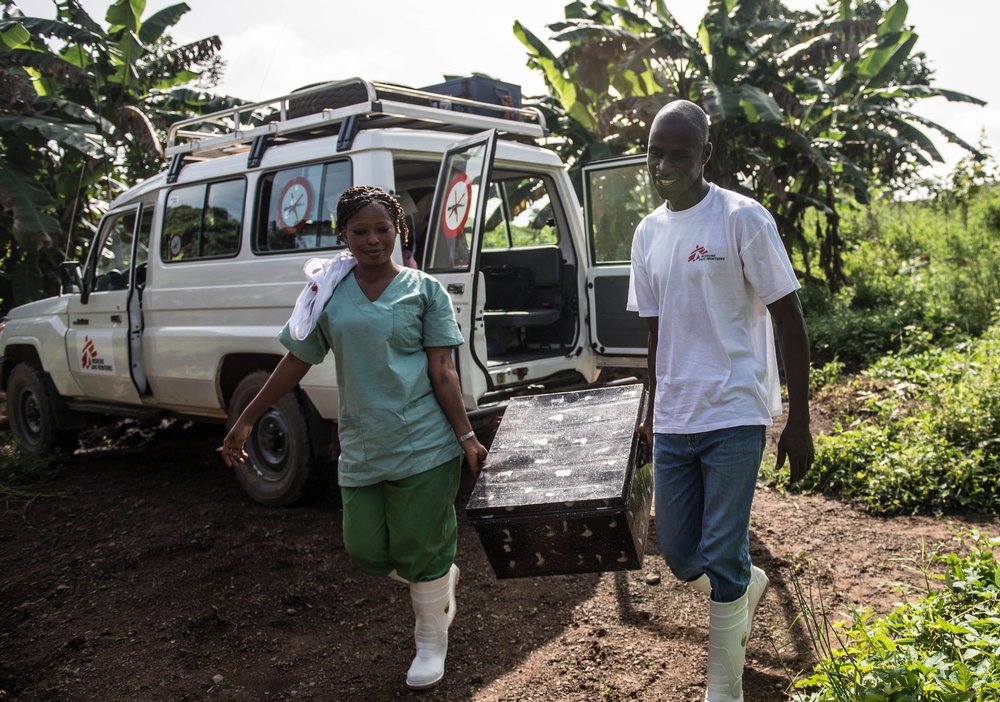 Nurses Patience Bimba and Dennis Okonye hep set up an Ebola survivor clinic during a MSF outreach mission the village of Mabekoh. Many Ebola survivors still suffer from physical, social and psychological problems after beating the virus.

What are the medical challenges for Ebola survivors?

There are an estimated 15,000 Ebola survivors in West Africa, many of whom have ongoing physical and mental health problems.

The physical problems include joint pain, chronic fatigue, hearing difficulties and eye problems, which could lead to blindness without prompt access to specialised care.

The experience of being infected with Ebola and spending time in an Ebola management centre, as well as all the fear surrounding the virus, can lead to severe depression, post-traumatic stress disorder and mental health problems, including persistent nightmares and flashbacks.

But despite their needs, Ebola survivors can have difficulties accessing health services.

It is essential that health authorities and all those involved coordinate their efforts to guarantee timely access to free quality care for survivors and their families.