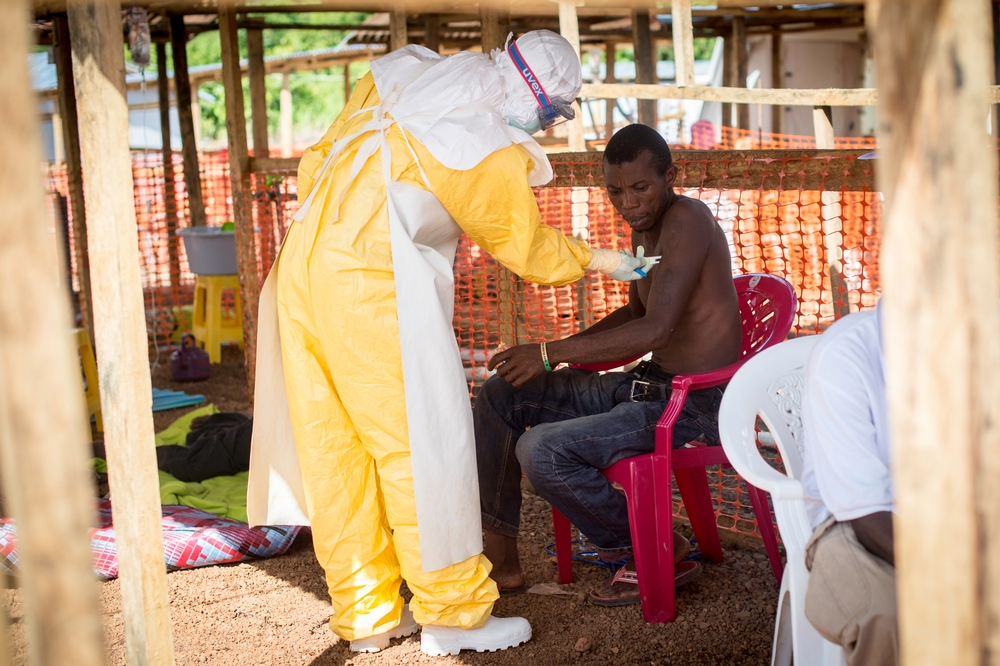 Sierra Leone: Race against time to control the Ebola outbreak

Over the last two weeks, Médecins Sans Frontières/Doctors Without Borders (MSF) has treated more than 70 patients with symptoms resembling those of Ebola in Kailahun treatment centre, eastern Sierra Leone. MSF is concerned about a possible increase in patients in the coming weeks, as teams on the ground are starting working to find people sick with the virus. Jump to video Jump to gallery

“To accommodate growing patient numbers, MSF has expanded the capacity of the treatment centre from 32 to 65 beds”, says MSF emergency coordinator Anja Wolz.

Beyond medical treatment, controlling the outbreak will require the deployment of large numbers of people to train healthcare personnel in infection control measures, to follow up with and trace cases and their contacts, to set up an epidemiological surveillance network, and to promote public health messages.

Because of limited human resources, MSF is concentrating its efforts on treating patients and educating communities about the disease, with more than 150 national and international staff now working on the outbreak in Sierra Leone.

MSF teams are racing against time to stop the spread of the disease. “We’re under massive time pressure: the longer it takes to find and follow up with people who have come in contact with sick people, the more difficult it will be to control the outbreak,” says Wolz.

At the moment, the Ministry of Health and the World Health Organisation (WHO) are starting to reinforce teams for contact tracing. Indeed, patients still need to be identified – nearly 40 were reported in just one village in Ngolahun (Eastern Province, Sierra Leone). “We still have no idea how many villages are affected. I’m afraid we’ve only seen the tip of the iceberg,” says Wolz.

By setting up treatment centres and transit units close to affected villages, MSF can treat patients quickly, and reduce the risk of infection in local hospitals and the in the community. In the transit units in Koindu and Daru, patients showing symptoms are isolated while waiting for the results of their tests.

The Zaire strain of Ebola virus can kill up to 90% of patients, but if patients receive treatment at the first signs of the disease, they have better chance to survive.

Ebola creates fear inside communities, and sick people are often stigmatised. "Families can be driven out of their villages, and sick people can be cast out to die on their own,” says Wolz. Psychological support is provided to patients and their families.

Joffrey Monnier/MSF
The MSF teams organise participatory health promotion activities with healed patients. To reduce fear, they are also conducting sensitisation campaigns to inform people on how the virus spreads. As such, they are encouraging people to flag up cases of haemorrhagic fever, to avoid contact with people sick with the virus and not to touch the dead body of someone who had been ill with Ebola.

The Ebola outbreak that is currently sweeping through West Africa is reaching an unprecedented scale in terms of its geographical spread, the number of cases and the number of victims. According to the WHO, there have been 848 cases of Ebola and 518 deaths in Guinea, Sierra Leone and in Liberia since the beginning of the outbreak.

The 2 and 3 July 2014, 11 Ministers of Health from the region, the WHO and international organisations met in Accra (Ghana) to evaluate the situation and take measures to stop the outbreak.

MSF asked all parties present to put their promises into immediate action on the ground – in other words, to make qualified medical personnel available, to organise training sessions on how to treat Ebola, and to scale up contact tracing and sensitisation activities.

MSF also called for leaders and influential people in the affected countries to put out public health messages in affected communities, which will be the only way to reduce the fear and stigma.