Somalia: “Floods have left people so vulnerable that it’s a dilemma to decide whose needs are the greatest”

Mohamed Kalil is MSF’s humanitarian affairs advisor for Somalia and Somaliland. He has been working for the organisation for over a decade and was part of the first emergency team deployed in Beledweyne to respond to the flood crisis. Now back from the field, he shares his experience.

Beledweyne is a big town in central Somalia, with high-rise buildings and a vibrant commercial activity. Although it is frequently affected by seasonal rains, this year was different. The Shabelle river was so swollen with water from the highlands of neighbouring Ethiopia that, in late October, its banks burst and almost completely flooded the town.

The floods have affected everyone, rich and poor, in a way that locals don’t remember ever having seen. Everyone was forced out of their homes and offices. In the business district, the water reached a level that couldn’t even be measured. Some people moved to rooftops and were isolated; others were rescued by boat from their homes.

After a few days without rain, the water is now receding, but damage to the roads and sewage system is very visible. Sewage and flood water have mixed, widely contaminating the shallow wells that provide drinking water. Food stocks have been washed away and stagnant puddles of water are everywhere, creating breeding grounds for mosquitoes that cause malaria and other diseases. 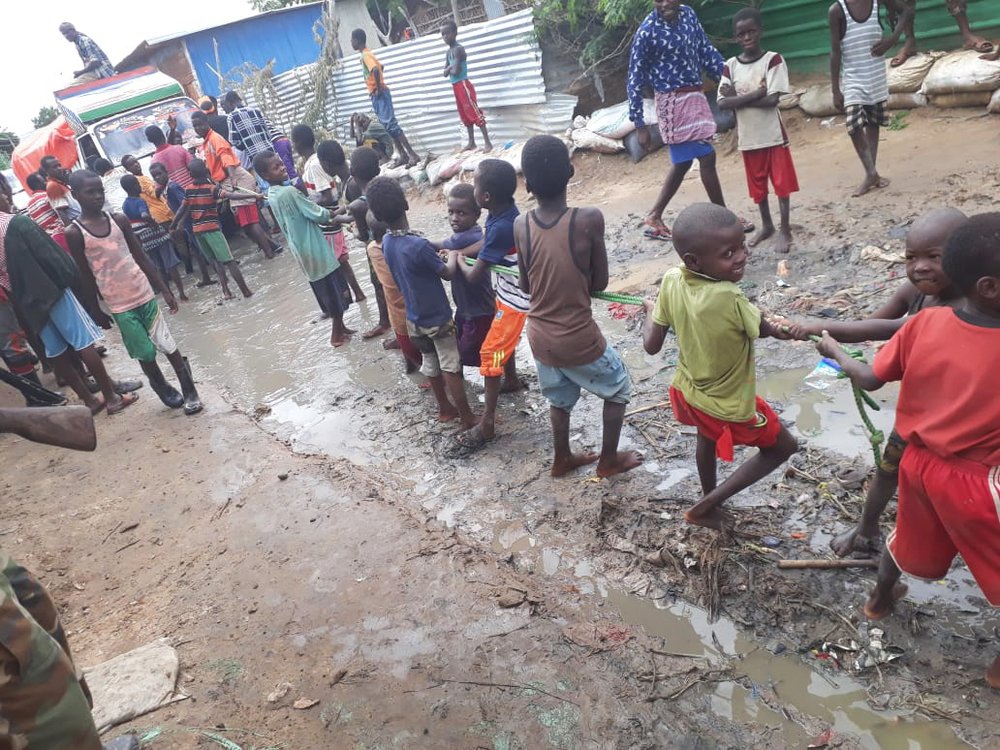 MSF
A group of children helps in trying to move a lorry with assistance for people affected by the floods in the town of Beledweyne, in central Somalia. 6 November 2019

The district hospital was flooded with half a metre of water. Only the operating theatre, situated in a more elevated area, wasn’t affected. Medical consultations stopped and the facility hasn’t been functional for the past three weeks. The electric system was likely damaged and barely any of the medical supplies will be useable again.

In a short space of time, the floods displaced around 270,000 people in Beledweyne[1]. They went to higher areas in the western and eastern parts of the town. Most are now living in makeshift shelters, which are often just clothes spread across wooden sticks or fastened to trees. It will be a long time before they can go back home.

We arrived with a small team in Beledweyne on 31 October. What was supposed to be an assessment immediately turned into an emergency response due to the immense needs. Despite the closure of the local airport over several days, we were able to transport supplies of therapeutic food, tents and non-food items, such as blankets, buckets and cooking utensils, by road. We also built latrines and trucked in safe drinking water. 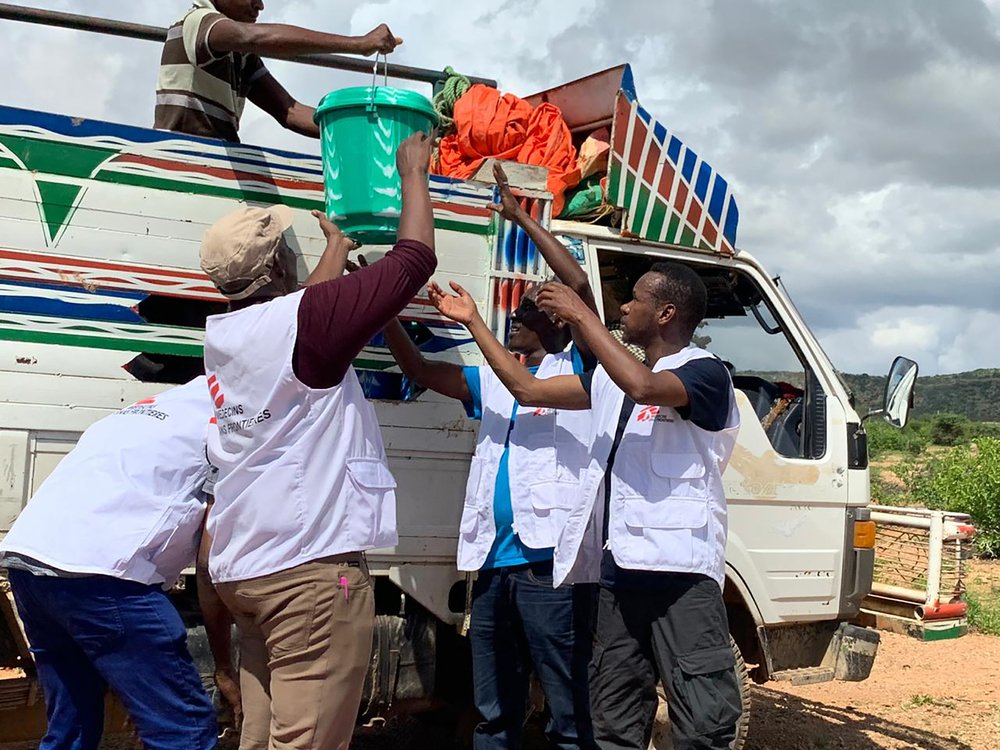 MSF
MSF staff carry buckets with aid in an area where people displaced by the floods are taking refuge in Beledweyen town, central Somalia.

People are in such extremely vulnerable situations that it is often an impossible dilemma to decide who has the greatest needs. I have seen adults and children taking turns to use tents or makeshift shelters because there aren’t enough to shelter the whole family. I have seen women delivering in very unhygienic conditions, and a desperate malnourished mother who had lost her husband unable to breastfeed her newborn twins due to hunger.

One day, while assessing an affected area, I was struck by the sight of a very old woman, seeking refuge in a precarious makeshift shelter. Days later, when we returned to provide a tent, it was already too late. We were told she was dead.

The aid distributed so far has been a drop in the ocean. Some families are even sharing the high-energy food supplement known as PlumpyNut, which is given to children in the treatment of malnutrition. Others have resorted to drinking rain water. Many have little protection for the very hot days and the chilly windy nights.

A second MSF team arrived a week after us. After training staff from the Ministry of Health, they set up mobile clinics in four different areas of the town. 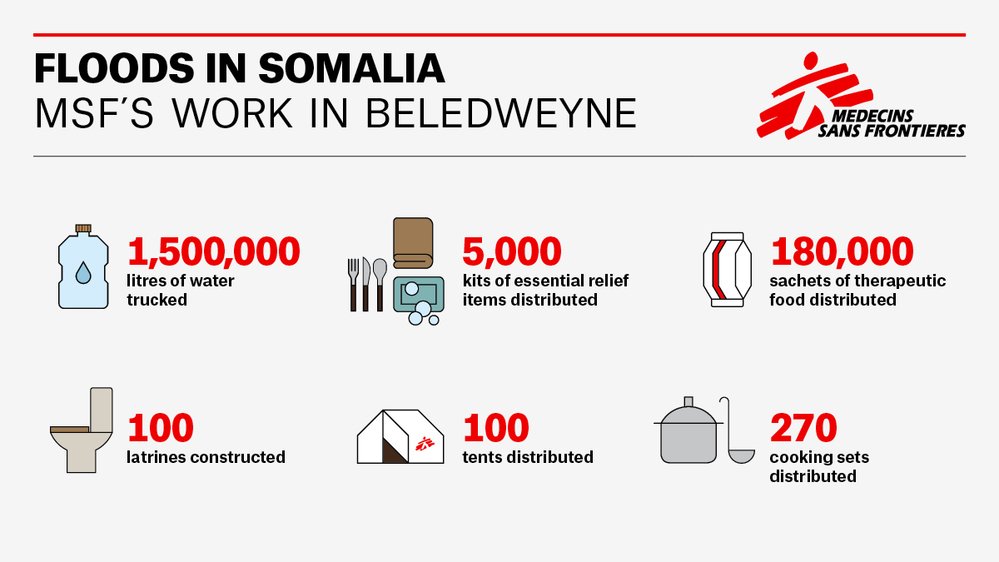 We see a lot of suffering. Children arrive with respiratory tract infections like pneumonia. We are treating many vector-borne diseases, particularly malaria, cases of watery diarrhoea and fevers of unknown origin.

Malnutrition levels were already high before the current crisis, but now the situation has worsened and many severely acute malnourished children are arriving for consultations.

We are concerned about the possible sharp increase of malaria cases and outbreaks of water-borne diseases like cholera. Concerted and coordinated efforts among humanitarian organisations and the local authorities are needed to continue mobilising assistance and to keep on ensuring that aid reaches the most vulnerable people in time.

It is crucial to quickly improve the poor water and sanitation conditions in Beledweyne and facilitate access to safe drinking water to avoid the spread of diseases.