In the last two years, the unrest ravaging eastern Democratic Republic of the Congo has forced many thousands of people to flee their homes. Many have found refuge on the other side of the border between North and South Kivu, where they share limited resources and land with equally vulnerable populations.

"No other choice but to run"

“We heard that there was peace in Katasomwa, so we decided to come here,” remembers Justin. 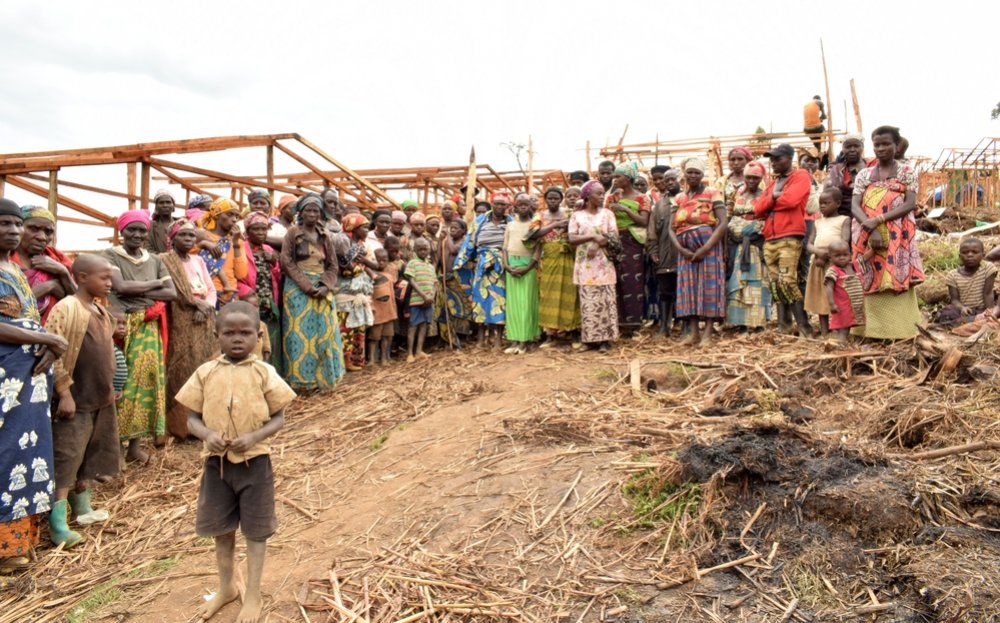 Paul Duke/MSF
The vast majority of displaced people in these poor health areas of Katasomwa, in the Kalehe Territory of the South Kivu province, are women and children.

“Many people were killed along the way. Since we got here, in July, we have had trouble finding food. We are constantly under threat from the rain, and the shelters we live in can burn down at any time. Our life is miserable.”

While Justin speaks, a straw hut burns a few yards away. Nobody moves. There is nothing to do but let the hut burn, as well as everything inside.

In a few seconds, the few possessions of one of the 957 displaced households on this site in Katasomwa have gone up in smoke.

They threatened us at night. They burned our houses down. They kept hitting us and even attacked some with their machetes.

Originally from Masisi in North Kivu province, Justin had no other choice but to run. With his family and thousands of other people, they crossed the provincial border until they reached the village of Katasomwa in South Kivu.

They weren’t the first to arrive. The endless fighting between the national army and Kinyarwanda-speaking armed groups in the past two years have caused more than ten thousand people to flee in this small area alone.

It is remote and deprived of basic infrastructure.

The vast majority of displaced people in these poor health areas of Mushunguti, Ramba and Bushaku are women and children. After the ordeal of life on the road and the living conditions in a displacement site such as Katasomwa, these people fall sick rapidly.

Diarrhea, acute respiratory infections and intestinal parasitosis are but a few of the many infections proliferating in these conditions. After an initial nutritional screening, many children were considered as severely malnourished. 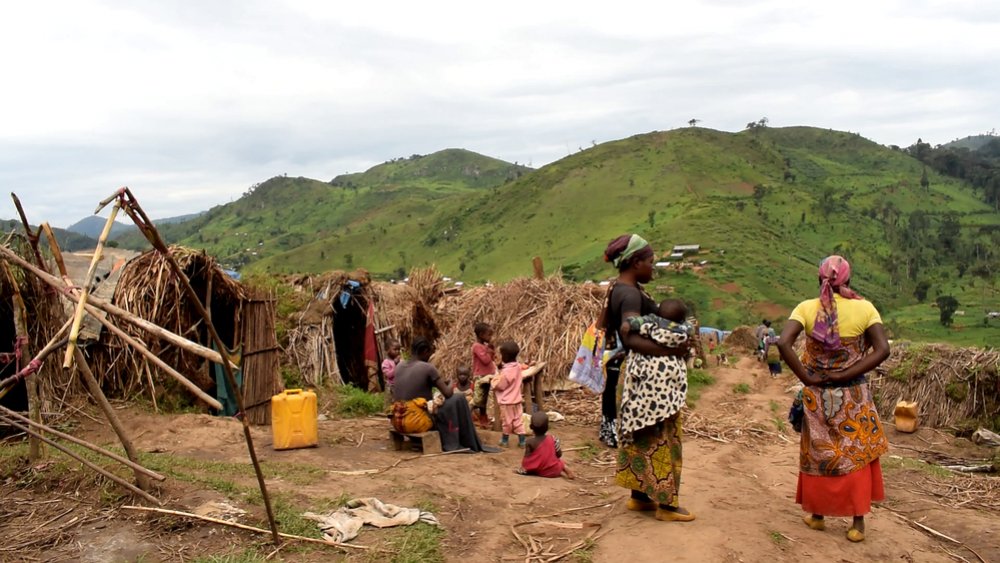 Paul Duke/MSF
Internally displaced people (IDPs) in Katasomwa, in the Kalehe Territory of the Congolese province of South Kivu, are living in makeshift camps, lacking basic facilities such as shelter, food, water, latrines and medical care.

The arrival of displaced populations has been a challenge for the fledgling health system. The Katasomwa health post is being run by motivated staff, yet deprived of adequate means.

“Displaced women would avoid coming to the health post because they have no money to pay for care,” tells head nurse Esther Isabayo Benimana. “Many would give birth in the camp, and some died that way.”

Médecins Sans Frontières decided to take action and respond with emergency medical aid to the dire health situation in these highlands and its vulnerable people.

According to MSF’s emergency medical officer David Namegabe, the priority was to respond to medical needs.

We first concentrated on the populations with the highest death rates, which was mostly children under 15 and pregnant women.

Maternal mortality in the area is very high. We also targeted all surgical emergencies, which are the other cause of death in this community as recorded by the health post.” David’s words are cut off by heavy hammering.

MSF’s logistics teams are rehabilitating the Katasomwa health post, as well as the other health facilities in the Mushunguti, Ramba and Bushaku health areas.

The populations in the area have not benefited from any immunization in more than three years. MSF decided to organize a multi-antigen vaccination campaign, in collaboration with health authorities. In the three areas, some 7,000 children were therefore covered against common yet avoidable diseases such as measles.

“We too require nine months to be born”

The needs remain high, and have the additional impact of exacerbating inequalities that had been affecting the area well before the arrival of the displaced populations.

The Pygmy communities were forced out of the Kahuzi Biega forest, where they had been living for generations until the park became a Unesco world heritage site, and are now the object of discrimination. 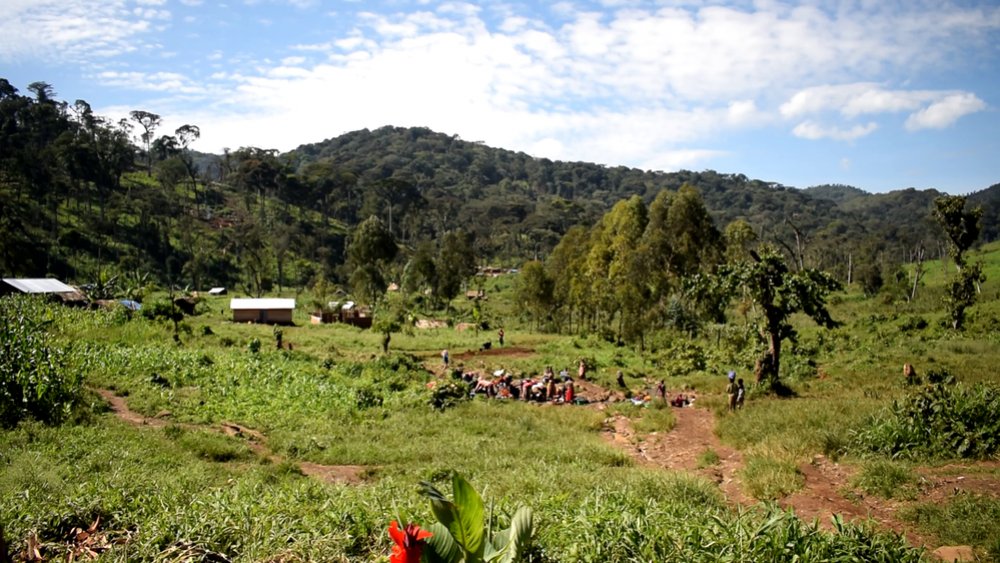 Paul Duke/MSF
The Kahuzi Biega national park, a Unesco world heritage site, is more famous for its gorilla reserves. The status comes at a cost of expelling nomadic Pygmy communities.

“Any child can steal, and it’s always the entire Pygmy community that gets blamed,” says Roza Nyirakongomani, a representative of this nomadic community.

“People say it’s the Pygmies who steal. Even if it wasn’t one of ours. Why? Because we don’t have regular activities. Our girls get raped. They leave in the morning to seek compensation but come back empty-handed. They are just taken by force. Sometimes we even know who did it, but we cannot take them to court because we don’t have the money to pay for a trial.”

These often-ignored populations warmly welcome any aid that can be offered. “We too require nine months to be born,” says Roza.

We don’t understand why we are constantly forgotten. It pains us.

Roza Nyirakongomani, a representative of this nomadic community

Need for protection of rights

To respond to the needs of the most isolated communities, MSF identified one member in each village as a volunteer health worker.

They should be able to provide care for the benign cases and refer the more serious ones to the closest hospital, in Chigoma. This will have the effect of relieving congestion in health facilities.

“This is Katasomwa!” shouts Innocent, who is in charge of training the community health workers.

After the theoretical learning process, each candidate receives a bundle containing a notebook, pens, rubber boots, medication… This basic package will enable them to improve the local health status of their fellow community members.

Tension, remoteness and different lifestyles have created mistrust and stigma towards minorities, whether displaced or Pygmy communities. Fundamental rights are constantly derided.

Beyond the medical needs MSF has responded to in this emergency situation, the people living in the Mushunguti, Ramba and Bushaku areas require protection of their rights, as well as better access to healthcare, education, justice and livelihoods that would enable them not only to uphold their daily lives, but also their children’s futures.