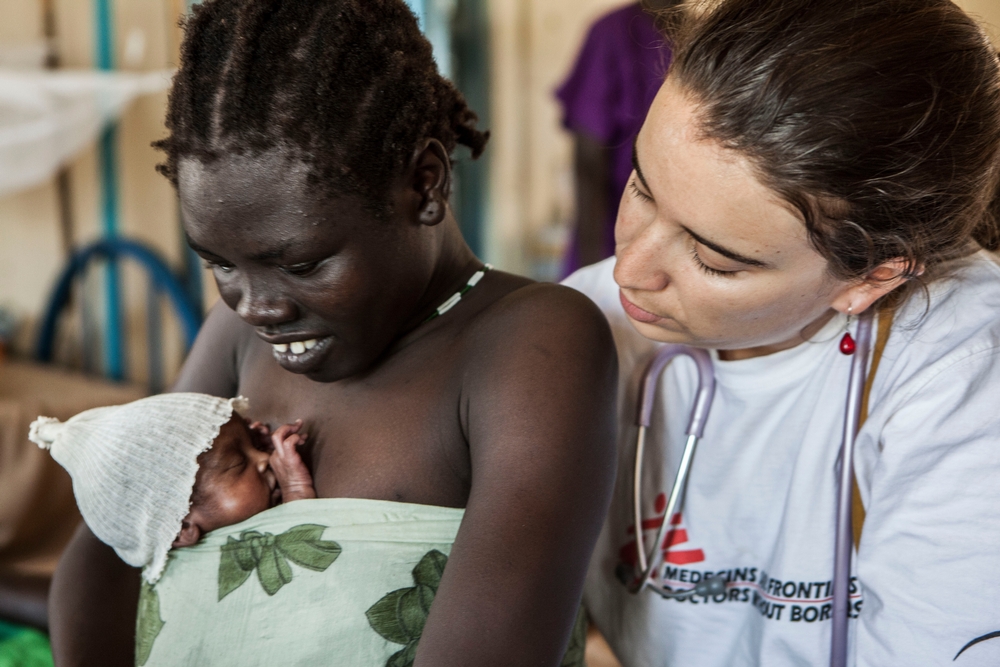 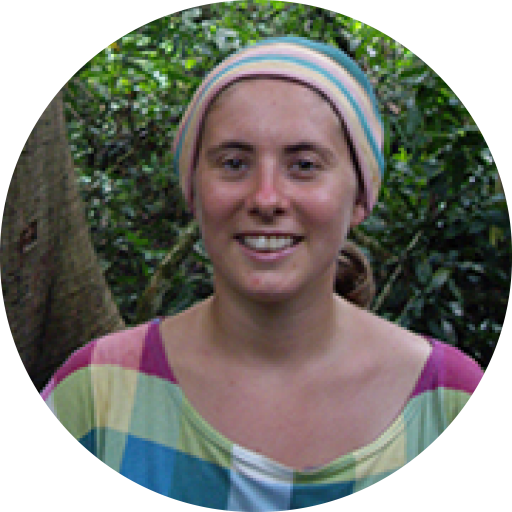 South Sudan: The Best and worst of things on the children's ward

Hazel is a British doctor who was on mission for MSF in South Sudan. She writes about her experience working at the children's ward in Aweil state hospital.

I am now several months into my mission as a doctor on a paediatric project in Aweil State Hospital, South Sudan. Friends have asked me what the best and worst things about working here have been so far. Two cases from this week illustrate for me the highs and lows of the job.

On Wednesday morning, a 4-year-old child is admitted to the intensive care unit (ICU) with severe acute malnutrition, sepsis (overwhelming infection) and severe dehydration from diarrhoea. At four years old she weighs just over 8 kilograms - less than the weight of an average 6-month-old girl in the United Kingdom. We are approaching the period of time known as the “hunger gap” in South Sudan – the time between harvests when food shortages become an acute problem – and so are seeing a big increase in malnourished children being admitted to the hospital.

This girl has been suffering from high fever and profuse, watery diarrhoea for many days.  The village she comes from does not have a properly functioning health centre and so the family are not able to get even basic medicines there. They are not able to afford the cost of transport from their village to the hospital and so the mother has walked for a full day to bring her here to us.

She has been brought to hospital very late in the disease process and now is extremely dehydrated and semi-conscious. She is too unwell to drink rehydration fluids, so we start an intravenous drip straight away. We have to monitor her closely whilst giving these fluids. In extremely malnourished children, giving the right amount is very difficult – too little and the child may die from dehydration, too much and their heart may be overloaded and stop beating. Her malnourished state means her immune system will not be working properly and so we start broad-spectrum antibiotics and anti-parasitic medications to try and help her fight any of the wide variety of bacteria, viruses and parasites that may be causing her diarrhoea. 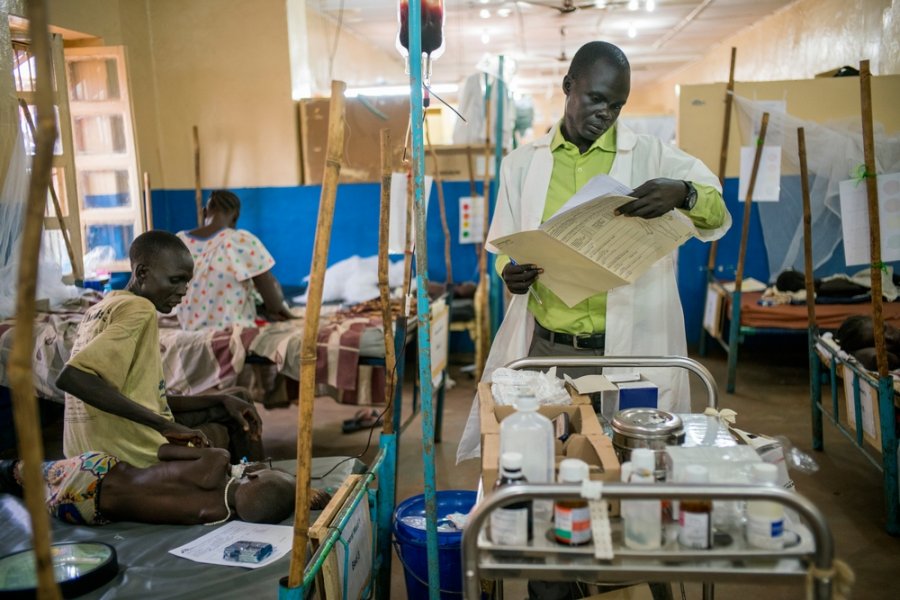 She is close to starvation and urgently needs nutrition, but is too weak to take any food herself. One of the ICU nurses inserts a feeding tube so that we can start giving specialised re-nutrition milk. This girl’s body has had to make major adaptations to cope with the state of near-starvation that she has been living with. We have to introduce nutrition in a gradual way to her, to allow the body to re-adapt to receiving enough food.

Despite our best efforts, the girl dies that afternoon. We try to resuscitate her but with no success. She was too sick and too weak from malnutrition to cope with the stresses of overwhelming infection and dehydration.

The reaction from the mother is heart-breaking in its restraint. At home, the death of a child would provoke extreme outward displays of emotion. Here, a few deep blinks and a slight lowering of the head are all that this mother allows herself. She does not have the luxury of being able to cry and grieve openly for this child. There are too many practicalities to take care of – she has to arrange to carry the body back to her village and return to the care of her many other children.

In this modern age, for children still to be dying from starvation and diarrhoea is very hard to comprehend. For these entirely preventable and treatable conditions to still result in tragedy, due to a combination of extreme poverty and lack of access to healthcare, is simply wrong. This aspect of the job can leave me emotionally exhausted and questing a world where this is still a reality for many.

But there is little time to process what has just happened, as another 4-year-old child is rushed into ICU. He has been brought directly from triage as he is critically unwell. He has a very low blood sugar level, low oxygen levels, a high fever and is having a seizure. Our translator speaks to the mother in the local language. She clicks her tongue to indicate yes, the child has had many seizures at home already today.  This is very concerning.

The team get to work quickly and efficiently. An oxygen mask is fitted and an experienced nurse skillfully places a line into a vein to give medication. Intravenous dextrose is given to raise the blood sugar level, rectal paracetamol to reduce the fever and an injection of the anti-convulsion medicine diazepam is administered to try and control the seizures. Using rapid bedside tests, a nurse assistant tests the child for anaemia and malaria.

The test is positive, the child has malaria. We quickly start the treatment, giving injections of a medicine called artusunate. This is the best treatment available for severe malaria and we are lucky to be able to give it. 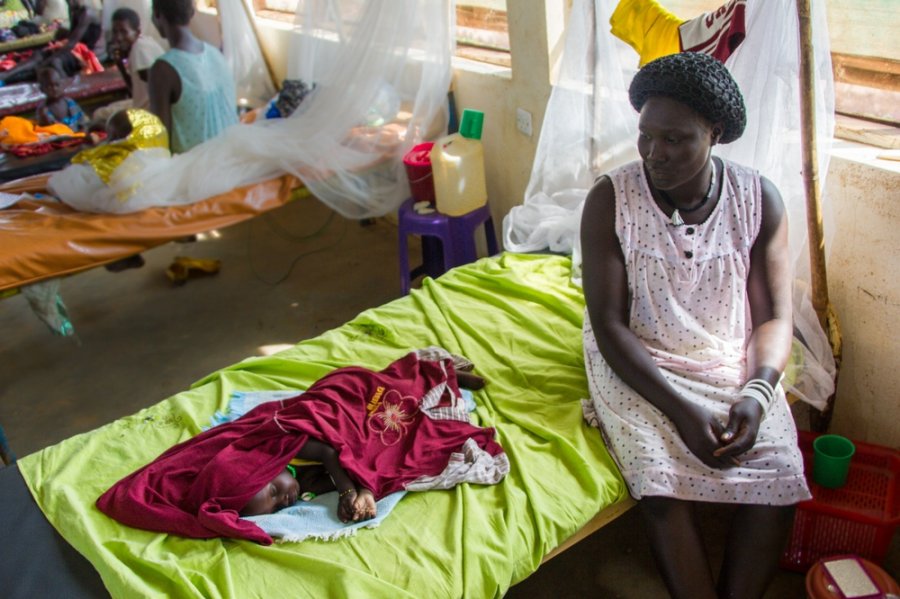 Paul Yarnall/MSF
A 1-year-old baby sleeps at MSF's Therapeutic Feeding Centre at Aweil while his mother looks on.

Despite correcting the blood sugar level and reducing the fever, the child continues to have seizures. We give repeated doses of diazepam but still he continues to convulse. We start an infusion of phenobarbitone, another anti-seizure medication, into the child’s veins. Finally the seizures stop, but the child remains deeply unconscious. He is suffering from the effects of cerebral malaria – the most severe neurological complication of malaria. Red blood cells infected with malaria parasites have become trapped in the blood vessels of his brain. As his body responds to try and fight the parasites, there is inflammation and swelling of the brain, leading to seizures and coma.

As I leave for the night, the child is relatively stable but remains deeply unconscious. He has received the best care we can give and now only time will tell if he recovers.

First thing the next morning, I head into ICU to check on the patients. The boy is sat up in bed eating porridge! He still looks a little weak but is unrecognisable from the unconscious, severely unwell child of the day before. His young mother is sat on the bed holding him tightly, her face lit up in a wide smile, her sparkling eyes framed by whirl after whirl of tribal scarification markings. She greets me and thanks me profusely for what we have done.

Although not all children with cerebral malaria are this lucky, it is extremely rewarding to see those that do recover. Access to the right treatment and the hard work of the staff here have resulted in a happy outcome for this child and his family. Being part of a great team and helping a severely unwell child to recover is by far the best part of my job and makes me proud to be here with MSF.