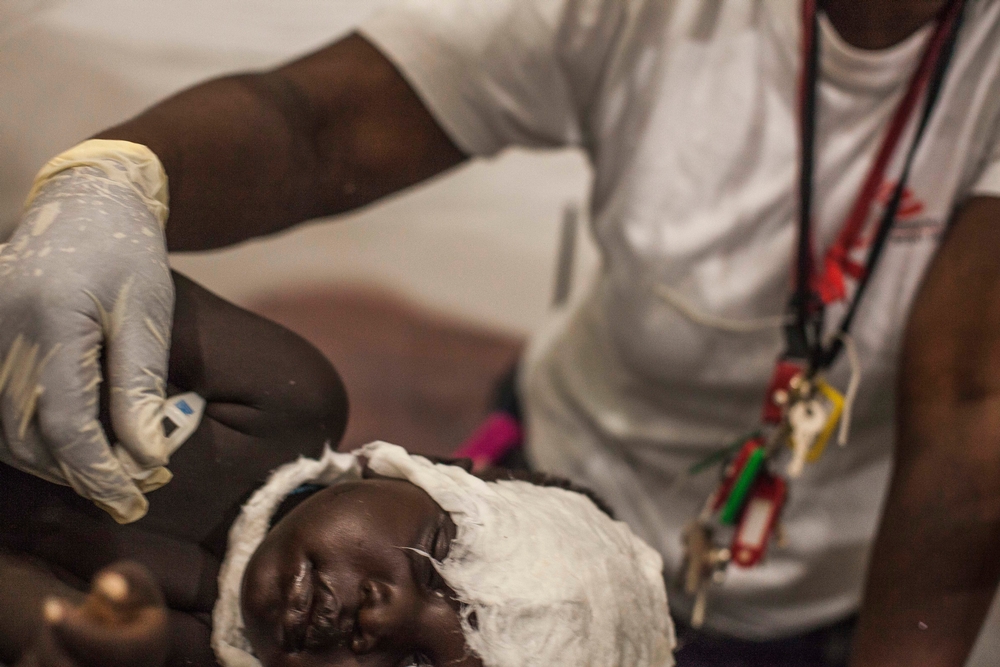 Dr Laura Heavey is working with MSF in Aweil, South Sudan, responding to a recent malaria outbreak in the region. Here she recounts her experience.

Even though it's winter in South Sudan, it’s still hot and dusty. Instead of the usual 30-40 degrees of heat, it’s now usually in the mid twenties in the day time, and a cool eighteen degrees at night - which has all the South Sudanese wrapping up in hats, scarves and duffle coats.

I’m still wandering around in shorts and tee-shirts, enjoying feeling a bit cool for a change! They definitely look at me strangely.

Winter also means the end of the rainy season and hopefully a reduction in the amount of malaria cases we are seeing here in the hospital.

At one point, we had 30 children on mattresses on the floor in the main corridor so two extra tents were erected to cope with our 300 plus admissions per week.

We’ve already managed to close one of the overflow tents that we opened for the malaria peak.

Diana Zeyneb Alhindawi
Visitors gather outside the entrance gate to the MSF-run wing of the state hospital in Aweil city.

Some of our children will have been sick at home for a week before they get to us.

Poor roads, the rising cost of fuel (which makes public transport expensive) and problems with the supply of malaria medicine to remote health centres can make accessing treatment really difficult for some families.

And what do you do, if you’re a mother with four children, three of whom are sick? If you carry the sickest to the hospital, walking for hours, maybe days, in the sun, what will happen to the ones you’ve left behind?

Diana Zeyneb Alhindawi
Patients lie on mattresses in the dirt outside, with IVs hanging from trees, at the government-run community health center in Aquem, Aweil Center county.

Unfortunately by the time some of these children get to us, significant neurological damage has already taken place, so even though they get all the correct treatment and we eradicate the malaria parasites, they still have serious long term problems related to their sickness.

I still think about one of the first patients I encountered when I started here three months ago.

A two and a half year old boy called Deng. Before he got cerebral malaria, he was a tall, strong and lively boy who could walk and run.

He was hard of hearing so hadn’t yet started to talk, but he could understand when you spoke loudly or gestured.

When I met him towards the end of his treatment course, he was blind and quadriplegic.

Telling his mother that he had had all the anti-malarial treatment and antibiotics that we could give to him but there was nothing more we could do for him - still ranks as one of the hardest things I’ve had to do here.

Sometimes the infection is just so severe, the medicine saves your life but can’t undo the cerebral damage already caused by the parasite.

The following day I treated a four-year-old boy called Kuach. He was in a deep coma and had the same decorticate posturing (contractions of the muscles in the arms and legs, signifying severe brain dysfunction) that Deng had.

I was terrified that this was another patient who would survive but with devastating consequences.

Then on the third day, I went to check on him one last time before I finished work for the day and there he was sitting up in bed, looking a little dazed, while his mother fed him some porridge!

I couldn’t believe it-he was awake! And talking.

He walked out of the hospital the next day.