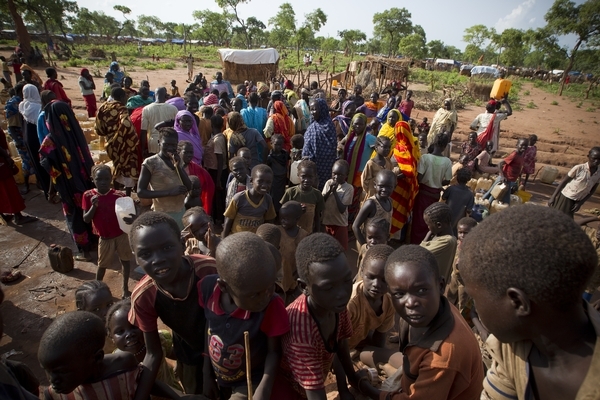 Close to 500 people a day are arriving at the camp in Yida. The UNHCR reports a total of 63,500 refugees in an already overcrowded camp originally intended for 15,000 people.

Having walked for days, and sometimes weeks, across the Nuba Mountains fleeing conflict and food insecurity in Southern Kordofan in neighbouring Sudan, the refugees arrive in extremely poor health.

“Most of our patients are in shock, and hospital mortality is going up as the camp’s population increases," explains Dr Mego Terzian MSF emergency desk manager.

"Given the sheer number of patients, we have to focus our attention on those whose lives are at risk and children suffering from diarrhoea, severe infections and malnutrition.”

V. Wartner/20 MINUTES
The majority of patients in the MSF-run hospital are children under 5 years old. The number of children admitted has doubled over the past month, increasing from 104 to 209.

The percentage of malnourished children seen in consultations has also gone up and hospital mortality has more than doubled in a month from 7% to 15%, mainly due to diarrhoea and severe infections, including pneumonia.

MSF teams are doing their utmost to help parents recognise the symptoms that call for a child to be brought to hospital as quickly as possible.

The number of people in Yida has more than tripled since April 2012. The rains have already started and the water and sanitation supply are simply insufficient. Despite the efforts of the organisations working in the camp, reception and living conditions for the 63,500 refugees are utterly inadequate.

“The majority of consultations in MSF’s medical facilities are for waterborne diseases that could be contained if there were enough latrines and adequate access to drinking water,” explains André Heller-Pérache, MSF Head of Mission in South Sudan.

V. Wartner/20 MINUTES
To respond to the ever-increasing needs, MSF, the main medical organisation in the camp, has stepped up its activities by increasing hospital capacity to 60 beds in 3 additional tents in the hospital. MSF is also reinforcing its team of already 80 people.

MSF has been working in Yida in South Sudan's Unity State since November 2011. It runs a hospital in the refugee camp and a consultations service, as well as providing medical care at the camp registration point.

In June, MSF vaccinated over 14,000 children under 15 against measles and continues to vaccinate children aged from 6 months to 5 years at the camp registration point. Other MSF teams provide assistance to Sudanese refugees in Upper Nile State.