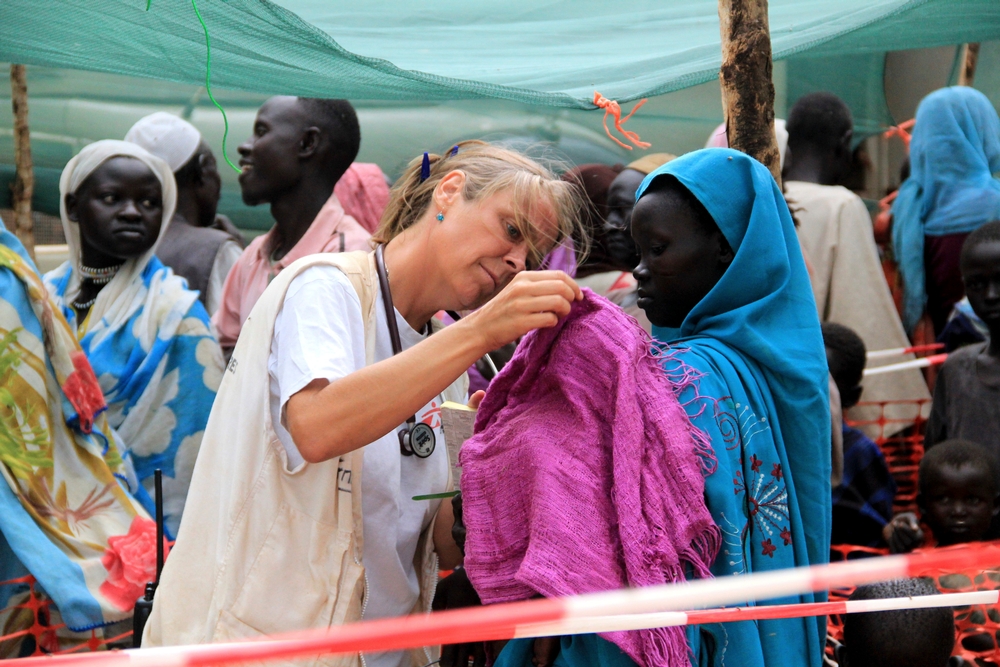 Dr Erna Rijnierse is currently working with Médecins Sans Frontières/Doctors Without Borders (MSF) in Bentiu, Unity State which has been the scene of heavy fighting for several days now.

“We’ve been able to provide emergency medical care to 12 people so far since heavy fighting started several days ago, stabilizing patients with gunshot wounds and related injuries. We’ve carried out nine surgical interventions. Several patients arrived in a critical condition, including a pregnant woman, who had a gunshot injury to the chest. We inserted a chest tube and for the moment, she and her unborn baby are stable. One nine-year old boy was shot in the chest and he died upon arrival at our hospital.

Stray bullets are flying from all directions

The last few days have been extremely chaotic. It’s difficult to move around safely inside the camp or even in the hospital, stray bullets are flying around from all directions. We’ve seen empty shell cases in our hospital. At any time the shooting and shelling can start, which means we have to run to the bunkers.  We don’t really know what is happening outside or who controls what. The atmosphere is tense and very unpredictable.

It’s hard to provide meaningful medical care when you’re worrying about stray bullets and having to spend long periods of time in the bunker. As a doctor, I feel helpless, very frustrated and even angry hearing the heavy pounding of shelling outside but being unable to reach those who are injured.

For the time being, we’ve been forced to suspend our mobile clinics outside the area under UN control. It’s simply too dangerous to go outside the camp due to heavy fighting. The primary health care clinics inside the camp have been closed for the last two days, but we hope they will be able to open again today.

The outreach team suspended activities for one day but the next morning they were there, ready to go and spread health messages in the camp. We have a positive case of hepatitis E in the camp so it’s vital that the outreach team continues to spread the message about hand washing and refers sick people to our hospital.
We’ve been able to continue staffing the hospital and aim to do so for as long as it is possible security-wise. There are currently around 40 patients, 15 of whom are children.”

MSF teams are providing healthcare to tens of thousands of people sheltering in the UN ‘protection of civilians’ site near Bentiu, a town in South Sudan’s Unity state, one of the areas most affected by conflict.  At present, MSF runs a hospital within the camp with maternity, paediatric and tuberculosis wards. There’s also an emergency department and surgical care. Outside of the camp, MSF runs twice weekly mobile clinics into Bentiu town itself.