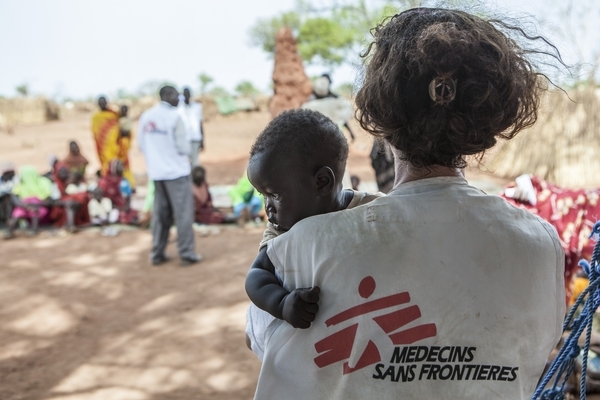 Yida camp in Unity State, where Médecins Sans Frontières/Doctors without Borders (MSF) has been working since late 2011, today covers nearly 1,200 hectares [about 3,000 acres], and hosts a population of nearly 75,000 —a five-fold increase in just over a year.

Sudanese refugees began streaming across the border into South Sudan in June 2011 when conflict erupted between the Khartoum government and the rebels of the Sudan People’s Liberation Movement-North (SPLM-N) in Sudan’s South Kordofan State.

No aid for refugees who refuse to move

Beyond the uncontrolled growth of the camp, which threatens the general health situation of the refugees, there are related security issues. The site is very close to rebel-controlled areas, leaving it open to accusations of serving as a rear base for the SPLM-N, and making it a potential target.

Within a broader background of international efforts to ease relations between Sudan and South Sudan since their split in July 2011, the objective is to dismantle Yida camp, or at least reduce its size, and relocate the refugees further away from the rebels.

In early April, the South Sudanese government and the United Nations High Commission for Refugees (UNHCR) thus began to settle all new arrivals to Yida in another camp located in Ajuong Thok, more than 70 kilometers by road to the East. Those who refuse to move are not provided assistance, with limited exception made for those who are critically ill.

"We survived for nearly month by eating leaves"

"We didn’t have anything left to eat,” he says. “After walking for three days, we went to register so that we could obtain food.

The United Nations told us that we had to go to Ajuong first, but we don’t know anyone there.

We survived for nearly a month eating leaves and with help from our friends. We had to wait until three of the children developed severe malnutrition to finally receive a ration card.”

Divisions between ethnicities in the camp further complicate the situation. Madi Moussa Sanduk is the chief of the Trawis, originally from Sudan’s Nuba Mountains:

“If we go to Ajuong Thok, we will be closer to our enemies, the Sudanese soldiers. People are afraid to settle there and don’t want to be separated from their tribe. Some even return to South Kordofan and tell others to not come to Yida.”

The influx of new arrivals has indeed recently decreased, while just a few hundred refugees have been transferred to the Ajuong Thok camp, which is supposed to hold 20,000. And the road connecting the two camps will likely be rendered impassable for several months by the coming rainy season.

"The location of Yida is indeed far from ideal,” says MSF programme manager Duncan McLean. “It seems that refugees may have received instructions not to leave there, and parts of the food distributions do make their way to South Kordofan.

But depriving the new arrivals of help will only worsen their health conditions. We can’t forget that two-thirds of the refugees are women and children.”

Already more than 1,500 people who arrived in Yida after April 1 are without ration cards. Many did not even go register with the UNHCR, making them difficult to identify. “In order to eat, they must share the food that other people receive, which increases the risks of malnutrition,” explains Corrine Torre, MSF on-site activities coordinator.

“The priority is to help everyone living in Yida to prepare for the rainy season. They still lack water points, latrines, mosquito nets, personal hygiene products, and plastic tarps.

We’re concerned about large-scale outbreaks of infectious diseases. In 2012, approximately 75 percent of hospitalizations for malaria and respiratory infections occurred between June and October.”

Barring a major change in the conflict between the SPLM-N and Sudanese forces, the rainy season is expected to table the problem of relocating refugees from Yida for six months—but not to solve it. “South Kordofan remains a war zone and Khartoum has yet to authorize a humanitarian presence there,” says McLean.

Present in Yida since October 2011, MSF currently runs one primary health care center (average 10,000 consultations per month), a 60 beds hospital, a malnutrition treatment unit and has mobile teams that move throughout the camp. MSF is also involved in water supply and latrines construction. From May 2012 to May 2013, MSF treated nearly 3,000 severely malnourished children in Yida.