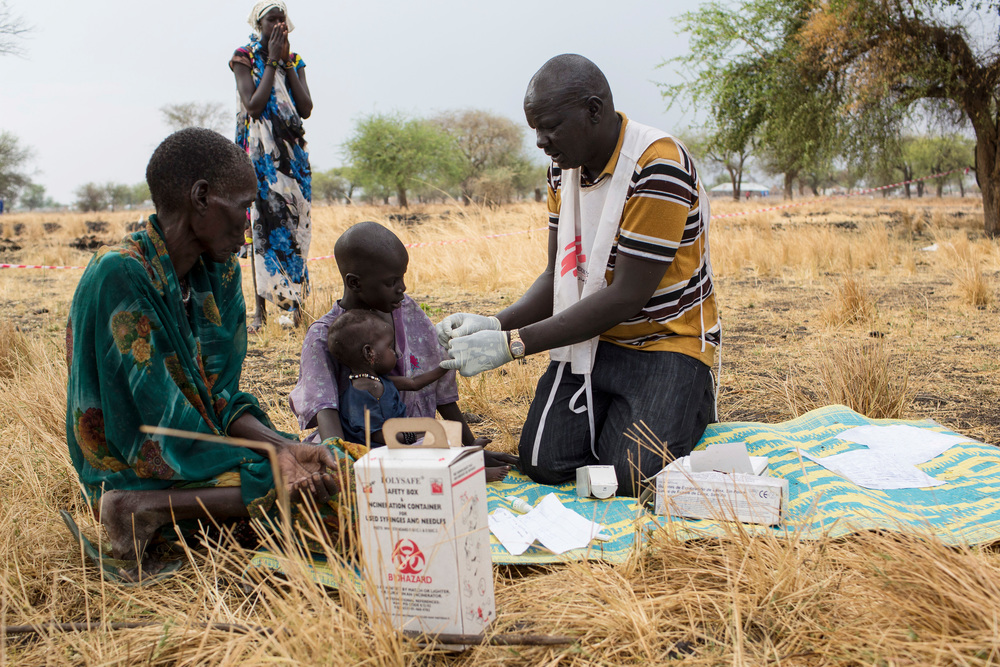 South Sudan, which split from Sudan in 2011 after decades of conflict, has been mired in civil war between the Dinkas and the Nuer, following political troubles between President Salva Kiir and his former deputy Riek Machar.

The country is the world's newest nation. It is rich in oil, but following years of war, it is also one of the least developed regions on earth.

Civilians on the frontline of conflict

The fighting of the past three years has forced millions to flee their homes, split much of the population along ethnic lines and paralysed agriculture, leaving many people food insecure. At least one-quarter of the South Sudanese population have been displaced from their homes.

"They stay with the community and, if the community needs to flee, they go with them, thus continuing to provide healthcare."
siegfried modola freelance photographer

Civilians are paying the highest price, as they are on the frontline of the conflict. Local people are unable to access even the most basic services needed to survive. Food and medical care is almost non-existent, except for that provided by humanitarian organisations when it’s safe enough for them to operate.

Entire villages have been burnt to the ground during ongoing clashes. In September, MSF set up a mobile basic healthcare programme to continue to reach the population. 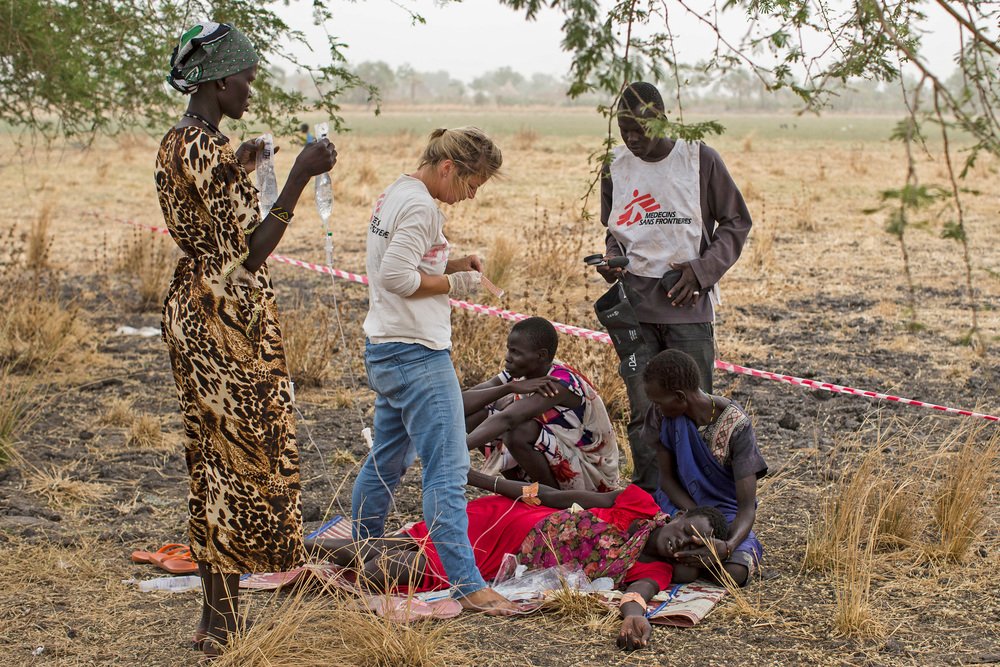 Healthcare on the go

Community health workers are trained in treating the most common health problems (skin diseases, respiratory tract infections, water-borne diseases and malaria). They stay with the community and, if the community needs to flee, they go with them, thus continuing to provide healthcare. 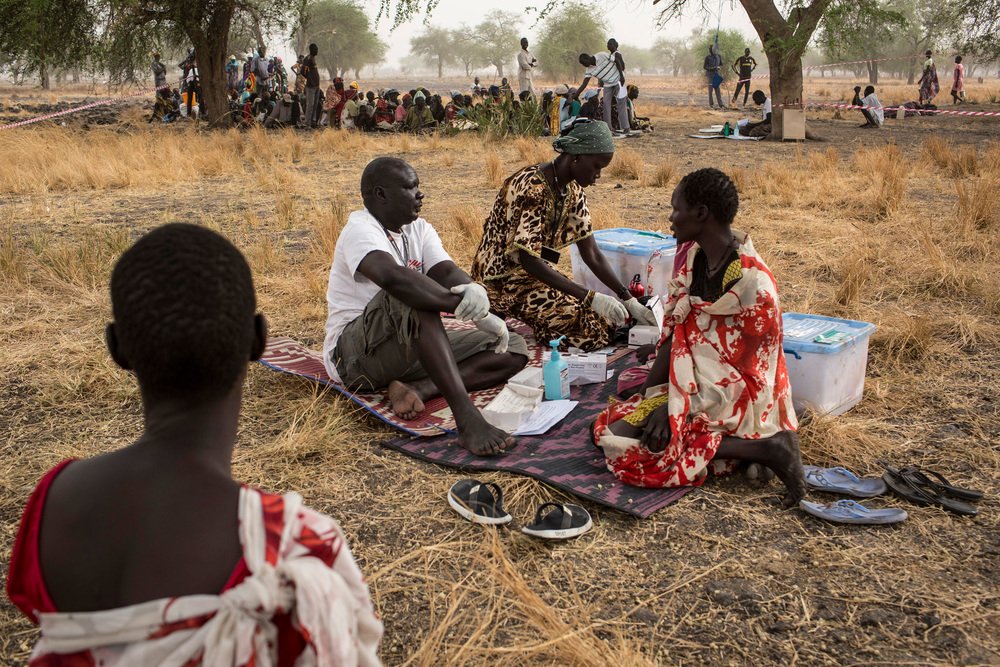 James*, 33, is an MSF community area supervisor. He has been working for MSF for one year and he is the team leader in this location. He explains the perils of his work.

“It is a dangerous job that we do as health workers. We follow the population wherever they are or go. Once I spent eight hours with others in the swamps to hide from gunmen. Five people were shot and died around me during this time. I remember seeing a mother holding her child, trying to breastfeed him.

She didn’t know the child had died. I love this job nevertheless. I love serving my community. People need medical care. They need us to be here to help them. Many are dying because they can’t reach a hospital in time. Many children are dying because of malnutrition and because they don’t have the appropriate vaccines", says James. 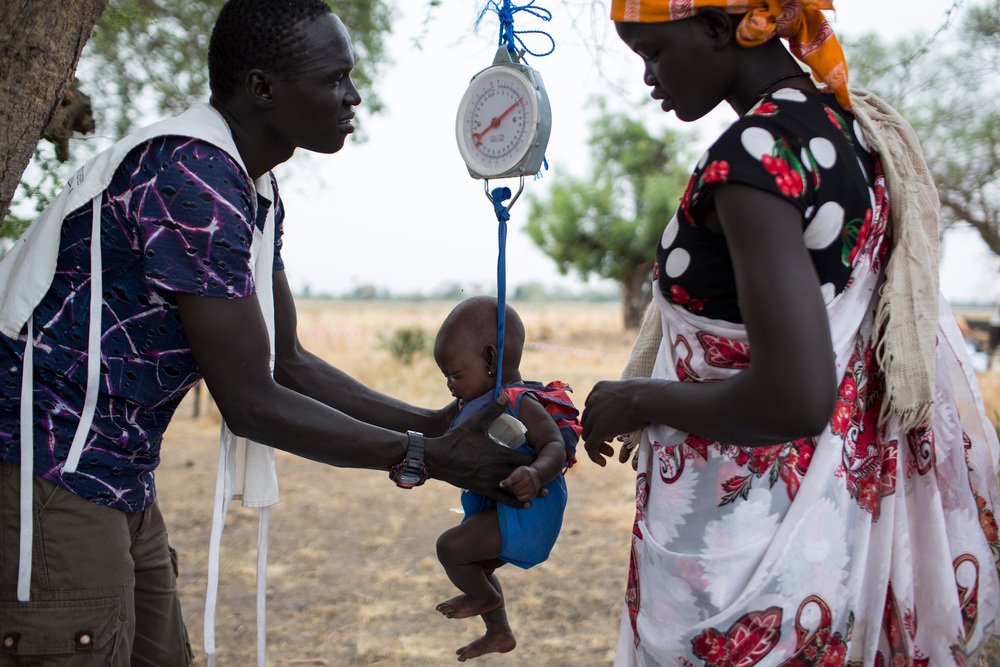 "Community health workers are trained in treating the most common health problems (skin diseases, respiratory tract infections, water-borne diseases and malaria). They stay with the community and this story should be about the local MSF staff on the ground.

They are the ones who face most of the dangers in their profession. They are targeted by armed gangs who believe that they have money as they work for an international organisation. My job here is to train them, to make sure they know how to diagnose and treat patients. They are the ones who stay behind when we leave."

Nyathol is a mum of three from Payak, South Sudan and has been displaced several times by the conflict.

"My name is Nyathol. I am 27 years old and was born in Payak. I have lived there all my life. My husband and I and three children lived in our tukul (hut). We grew maize and sorghum on our land and kept cattle, goats and chicken. Now we live in a small shelter made of sticks and plastic, displaced on the island of Bahr.

In October and November 2016 we were forced to run away from our village three times to hide in the bush. We learned to listen for the noise of cars and tanks, and would grab what we could before running away. The armed men would shoot at us and loot our homes.

"I had to make a small boat from plastic sheeting to put the twins in to float across the swamp as the water was too deep for me to hold them. It was a long 17-hour journey. We drank swamp water and ate the little food we had on the way."
Nyatholmum of three

I would run with my twins in my arms while my four year old daughter would run beside me. Sometimes we saw people drop to the ground as they were running after being shot, or throw their belongings away because they could not run fast enough.

We would hide in the bush until night time and return when the soldiers had gone. Every time this happened we would come home to less. Our cattle, goats and chickens gone, then crops and finally our houses were looted and burned.

During the last attack on Payak the population decided it was not safe to return and we needed to move from the bush to another place. I was alone as my husband was out of town. I moved with my three children and all of Payak on a long journey through the bush to Bahr island. It was a long 17-hour journey. We drank swamp water and ate the little food we had on the way.

I did not know anyone on Bhar island. I had no family there and no house to sleep in. For the first few nights we slept outside with no shelter until I used some sticks, grass and palm leaves to cover us. I was scared that the armed men would follow us there too. A few days later they came to the island. We knew they were coming because we heard them shooting and killing people in the swamp as they came across to the island.

Everybody scattered and we entered the swamp and walked to another island called Dhorkeen not to far away. We waited there until they left Bahr. When we returned the last of our belongings had been taken. We have nothing now. In order to survive we eat water lilies and mud melons, and depend on food drops.

I hope one day there will be peace and I can return to Payak with my family."