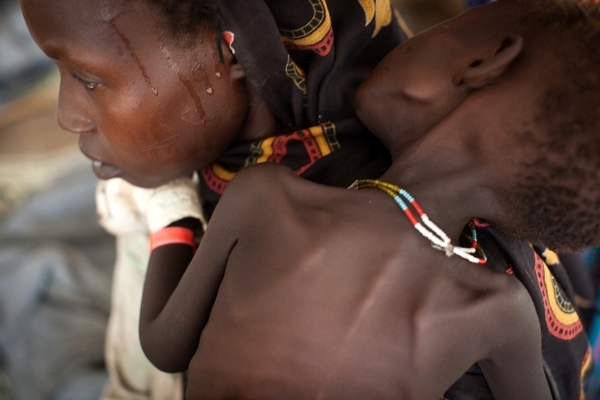 More than 170,000 refugees have made the harrowing journey across the border to escape conflict and food insecurity in Sudan’s Blue Nile and South Kordofan States. Many had to walk for weeks and have arrived in four refugee camps in an extremely weak and vulnerable condition.

In two of the camps in particular appalling living conditions are resulting in devastating health consequences. Since June, an average of five children are dying each day in Yida camp and one in three children is malnourished in Batil camp.

Tip of the iceberg

“The number of children dying in Yida camp is appalling and the 1,200 children with severe acute malnutrition in MSF’s feeding programme in Batil camp is just the tip of the iceberg,” says André Heller-Pérache, MSF Head of Mission.

"The majority of our patients in both camps are malnourished children who are further weakened when they contract diarrhoea, malaria or respiratory infections.

They quickly enter a vicious circle of illness that can lead to further complications and death.  Our medical teams are working round the clock in desperate conditions trying to save lives.”

In Yida camp, which hosts the 55,000 refugees in Unity State, new MSF epidemiological data of mortality covering June and July shows four deaths per 10,000 people per day for children under five years old.

This is double the emergency threshold and indicates an average of at least five children dying each day over this period, most from diarrhoea and severe infections.

The global mortality rate over this period is also double the emergency threshold, with two deaths per 10,000 people per day. The study, completed on July  27th, showed that 82 percent of refugee families had a family member fall ill over the previous two weeks.

Nichole Sobecki
In Batil camp in Upper Nile State, hosting around 34,000 refugees, preliminary results of another new MSF epidemiological survey completed on 31st July show the global malnutrition rate among children at 27.7 percent, and the rate of severe acute malnutrition at 10.1 percent, five times above the emergency threshold.

Even worse, 44 percent of children under two years old are malnourished, 18 percent of them with severe acute malnutrition.

The study also shows a mortality rate for under-fives in the camp to be at 2.1 per 10,000 people per day over a four-month period, above the emergency threshold.

While the full break-down and analysis of data is still pending, the MSF team fears that the mortality rate in recent weeks is much higher.

“The rainy season has turned these camps into nightmare places to be a refugee,” says Bart Janssens, MSF Operations Director.

“The access roads are disintegrating and the humanitarian response is struggling to provide conditions where people can live.

This is causing a catastrophic health situation, and while MSF can continue to provide treatment,  a huge increase of capacity of humanitarian actors is needed now to avoid a lot more children becoming life-threateningly ill.

Especially in water and sanitation since diarrhoea is the major killer in the camps and also for targeted food distribution in Batil where the malnutrition is so far above emergency thresholds.

The situation requires all organisations to work in full emergency mode now.”

The main medical aid provider in all four refugee camps in Upper Nile and Unity States, MSF is running a massive aid response. In Yida camp the number of hospital beds has just been doubled to allow treatment of the increasing number of seriously ill patients. And across all four refugee camps in South Sudan MSF has more than 180 international staff and is sending more reinforcements to cope with the massive health needs.

References for interpretation of mortality and malnutrition results:

Since November 2011 MSF has been running emergency programmes for refugees fleeing South Kordofan and Blue Nile States in Sudan. MSF has a field hospital in each of the four refugee camps (Batil, Doro, Jamam and Yida) and is providing more than 9,000 consultations per week.

150 new patients are admitted for intensive in-patient hospital care each week and 2,300 malnourished children are treated in MSF therapeutic feeding programmes. MSF is also vaccinating against measles when there are new influxes of refugees, is providing Water & Sanitation assistance in the camps and is stepping in when necessary to carry out emergency distributions of basic survival essentials such as soap, plastic sheeting, and emergency food rations.