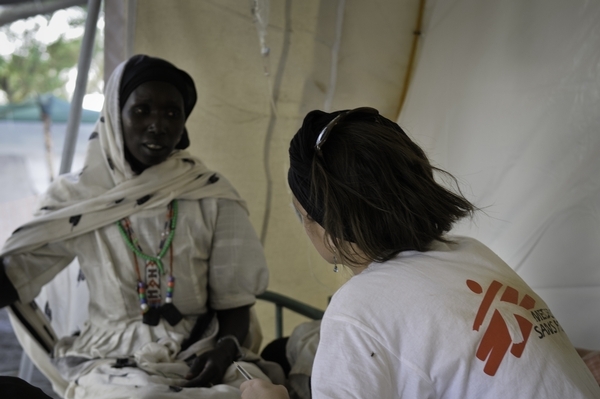 The international medical organisation Médecins Sans Frontières/Doctors Without Borders (MSF) is treating patients wounded on 10 April in aerial bombardments in Abiemnom, Unity State, South Sudan. Violence has taken place in the region over the past couple of weeks and the situation remains extremely volatile.

MSF’s hospital in Agok, 36 km east of Abiemnom, received four wounded patients on the afternoon of 10 April ­– a woman and three children – all of whom had severe open wounds requiring multiple surgery. All four have now been stabilised.

The MSF team in Agok has also donated drugs and equipment to the Ministry of Health’s medical centre in Abiemnom to support the treatment of 40 wounded patients there.

“In this region the population is on the frontline. Emergencies are unfolding one after another. Our teams are doing their best to respond to people’s most urgent needs – whether for food, shelter or healthcare.  says Emmanuel Roussier, MSF’s head of mission in Juba.

Since the previous clashes in Abyei region in May 2011, MSF has been running mobile clinics throughout the region, including in Machbong, Abathok, Mading Achueng, Akack Nyel, Leu, Marial Achak, Mabok, Rumamer and Abiemnom reaching approximatively 100,000 persons.

MSF teams are monitoring the humanitarian situation, particularly among people affected by the violence, including those who have been displaced from their homes. All severely sick or wounded patients are referred to MSF’s hospital in Agok.

MSF staff in Agok are prepared to respond to a further influx of wounded if the fighting continues. They are also ready to scale up healthcare, shelter materials and relief items for the affected population.

In November 2011, following an assessment of food security and nutrition in the area, MSF began providing supplementary food for all children under five, reaching up to 15,000 children. It also conducted a mass measles vaccination campaign.

MSF has been working in the contested Abyei region since 2006. After violent clashes in 2008, which forced thousands of people to flee south, MSF set up a hospital in Agok, on the border between Warrap State, South Sudan, and the contested area of Abyei Area.

The hospital provides a wide range of services, for both outpatient and inpatients, and has an operating theatre for surgery, a maternity ward,  a paediatric unit, a tuberculosis ward, and a therapeutic feeding centre for malnourished children.

In 2011, there were 31,187 outpatient consultations and 2,418 patients were admitted as inpatients to Agok hospital.