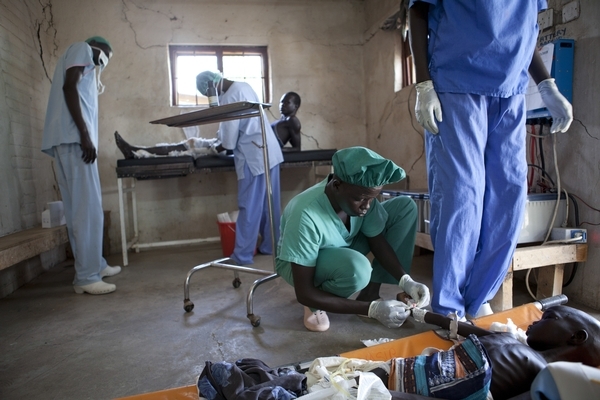 A report released today from Médecins Sans Frontières/Doctors Without Borders (MSF) highlights the devastating impact of violence on the lives and health of civilians in South Sudan’s Jonglei state.

Women and children as young as four months old are among the victims. Healthcare is threatened as medical facilities are targeted and destroyed.

Jonglei state has a long history of intercommunal cattle-raiding; however, since 2009 thousands of civilians, women and children have been caught up in violent attacks, which usually occur in the dry season.

A disarmament campaign process in mid-2012 led to widespread insecurity and was accompanied by abuses against civilians. Further fighting between a militia group and the South Sudan armed forces in Jonglei compounded the violence and caused new displacement at the height of the malaria season.

“Patients arrive in MSF clinics seeking treatment for injuries describing how they have been forced to make devastating decisions about which children to flee with and which children to leave behind,” says Chris Lockyear, MSF Operational Manager.

“What we are seeing is an emergency; the lives and health of Jonglei’s population are hanging by a thread.

The dry season is now upon us, making movement around the area possible again, and we fear a further spike in violence, injury and displacement.”

MSF’s report South Sudan’s hidden crisis: how violence against civilians is devastating communities and preventing access to life saving healthcare in Jonglei contains harrowing accounts of civilians caught up in attacks on villages.

"They threw children in the fire"

A woman treated by MSF tells of an attack in March this year: “They threw children in the fire. If the child can run, they will shoot them with the gun; if they are small and cannot run, they will kill them with a knife.”

More than 50 percent of gunshot wounds treated by MSF after one attack in January 2012 were women and children.

The indirect consequences of the violence are less visible but equally serious. Entire communities have had to flee for their lives deep into the bush. Without shelter, food or safe drinking water, they are susceptible to malaria, pneumonia, malnutrition and diarrhoea.

Healthcare has come under attack in Jonglei state. MSF health facilities were destroyed or looted in Pieri in August 2011, Pibor and Lekwongole in December 2011, Lekwongole in August 2012 and Gumuruk in September 2012, denying healthcare to an already vulnerable population.

MSF is the only provider of free high quality healthcare in northern and central Jonglei, with six medical facilities serving a population of 287,000. From January 2011 to October 2012, MSF treated hundreds of wounded people and provided more than 227, 851 medical consultations.

“Today we are sharing the medical consequences as our teams see them on the ground,” says Lockyear.

“Jonglei is in the grip of an emergency. MSF remains committed to providing neutral and impartial healthcare in Jonglei, however we fear there may be even more medical needs among people who cannot reach our clinics – due to sheltering in the bush or for fear of travelling to seek care. MSF calls on all armed groups to respect medical humanitarian facilities and staff”.