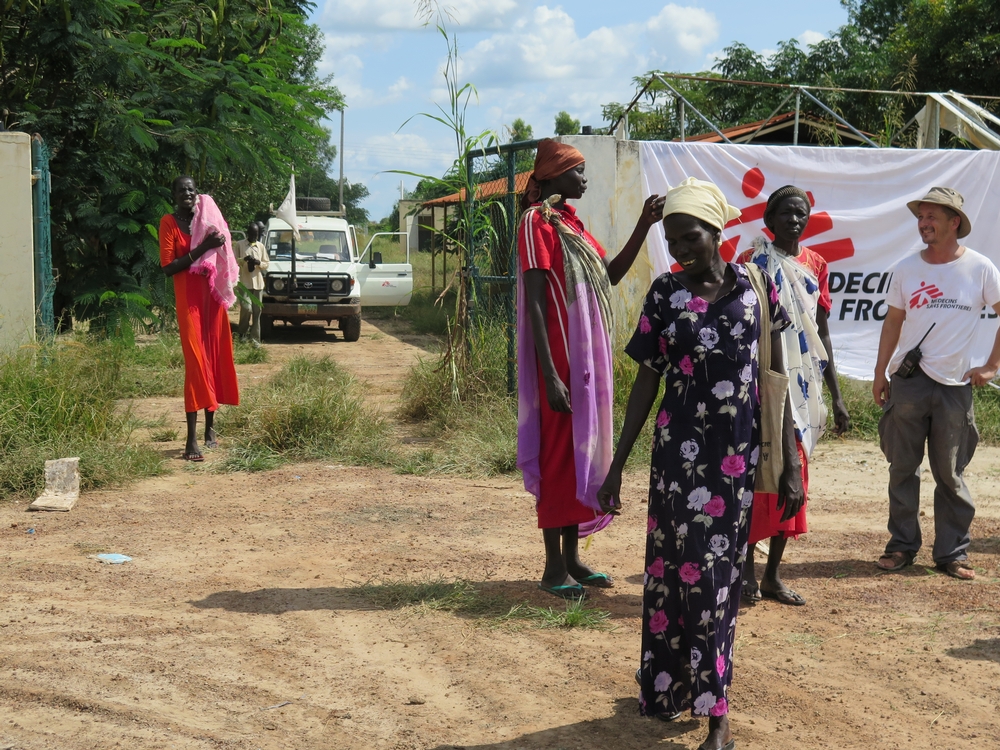 South Sudan: Nursing on the frontline

When I arrived in one of South Sudan’s biggest towns, Malakal, in Upper Nile State with Médecins Sans Frontières/Doctors Without Borders (MSF), in February 2014, the conflict was already underway. There were warnings that the town would soon be taken by opposition forces.

It was eerie seeing streams of people leaving in anticipation of the fighting and heading towards the United Nations (UN) compound in search of safety. I remember one woman with no possessions with her, just a baby in her arms. The next few days were tense as we heard gunshots in the distance and waited for something to happen.

Attacked in the middle of the night

Opposition forces attacked in the middle of the night. We had been forced to abandon our base in town and move into the UN compound some days earlier for our own safety. I was asleep in a tent with other members of the team when the project coordinator woke us up and told us to get ready, something was happening.

The internal barriers around our living quarters within the UN compound had been broken down as displaced people tried to get as close as they could in search of extra protection. Wide-eyed and silent, hundreds of women and children were now huddled under trees and next to our tents in the darkness.

The ground began to shake as shelling started near the compound and we ran to the bunker, a collection of six shipping containers fortified by sandbags. The women and children ran with us. It was extremely hot inside, with as many people as possible packed in. We sat there for hours, trying to listen to what was happening outside.

Reports came in of mass casualties and we left the bunker and drove a few hundred meters through crowds of rioting people to the compound’s hospital. The smell of burning was overpowering, ash was falling from the sky and there were towers of black smoke on the horizon as Malakal burned. Through the window of the jeep I saw a terrified girl, about 12 years old, with a wild look in her eyes. She was swinging a machete round and round to try and protect herself.

Jean-Pierre Amigo/MSF
Tens of thousands of people have taken refuge in a camp near Bentiu, one of several “Protection of Civilian” sites managed by the UN's mission in South Sudan (UNMISS) and set up spontaneously after violence swept across the country last December.

The unusual work of a nurse in South Sudan

At the hospital we treated gunshot wounds, injuries from machetes and blunt trauma. With supplies running low, I went from patient to patient. For the remaining months of my mission the focus was on treating war wounded. Not what I expected to be doing as a midwife in South Sudan…

I felt compelled to return to South Sudan later that year and I’m currently working as an obstetric nurse in Bentiu, a town in conflict-affected Unity State. MSF is providing healthcare services to around 40,000 people sheltering inside the UN compound and is running mobile clinics to help people in the surrounding area.

Just like in Malakal, the former hospital in Bentiu town was destroyed during fighting. It’s now completely non-functional. The modern hospital buildings are infested with bats and rodents, medical equipment has been looted or vandalised, and the compound is littered with medical supplies. We cleaned up one of the outbuildings and set up a temporary clinic several days a week. I run a special session for pregnant women.

During these antenatal clinics, we identify women with high risk pregnancies. This can be a woman carrying twins or triplets, or a woman whose baby is not in an optimal position for birth. Those who have experienced complications with previous deliveries such as excessive blood loss, a retained placenta or a premature baby are told to deliver at the MSF facility.

All pregnant women get a mosquito net to prevent malaria and women nearing their delivery date are given a safe birth kit which consists of a plastic sheet, two blankets (one to wipe the baby, one to wrap it in), a bar of soap, a pair of gloves and a sterile blade to cut the umbilical cord.

Caroline Livio
Families in the MSF project in Bentiu

Recently, a woman who had been raped arrived at the antenatal clinic. She wanted to find out if she was pregnant, and was relieved to discover she wasn’t. After treatment for sexually transmitted infections she left the clinic as soon as she could and did not want her visit documented. Sexual violence is difficult to address in South Sudan.

There are many barriers that prevent survivors of rape from accessing the care we provide. Confidentiality is a big issue and many women are worried about their families or the wider community finding out in case they are no longer able to marry. Many of the accounts from survivors of sexual violence are harrowing. One woman who had been taken captive by armed men and repeatedly raped told me “if you don’t accept to be raped then they will kill you”.

The value of MSF’s neutrality and impartiality

However, there have been some positive moments – I was pleased to be able to tell a woman who had been raped that she was HIV negative. Her face lit up with a huge smile from ear to ear.

Working in Malakal and Bentiu, I have seen first-hand the value of MSF’s neutrality and impartiality when it comes to providing medical care – and just how important this is to people’s survival in times of conflict. Working in South Sudan I help the most vulnerable, women and their children, but not always in the ways I would expect.

After her mission, Siobhan will be returning to her regular job at the labour and delivery ward at Thunderbay Regional hospital in Canada.