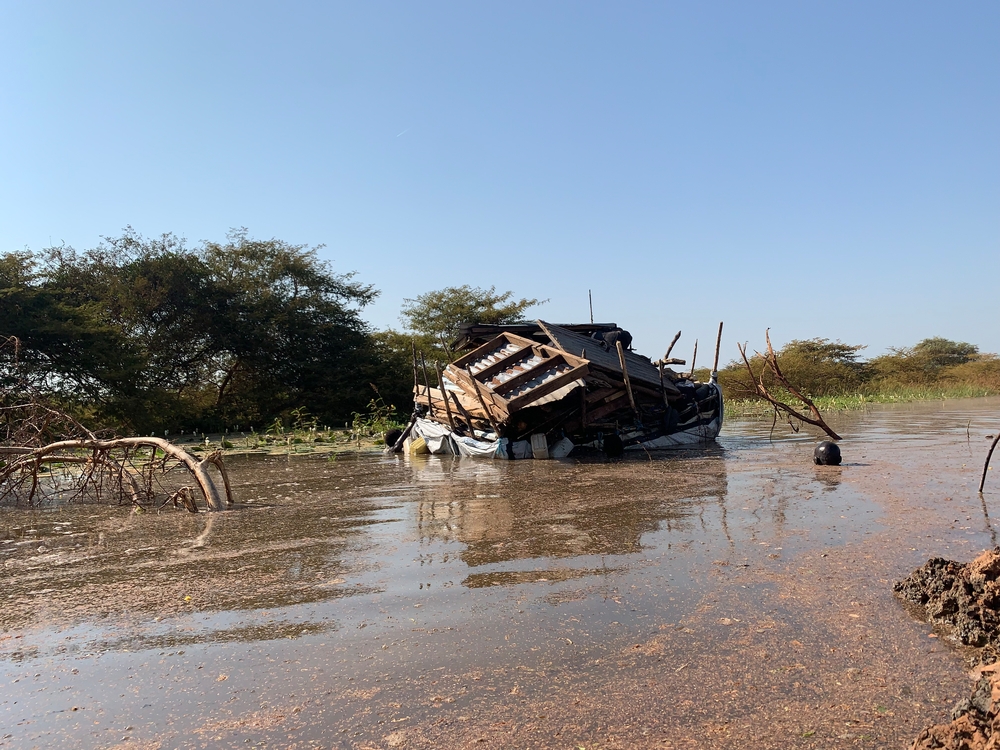 23rd November 2021  – People in Bentiu in northern South Sudan are facing outbreaks to infectious and waterborne diseases, increased food insecurity and malnutrition, due to some of the most severe floods in decades. A failure from humanitarian organisations and authorities to scale up quickly enough in response has left at least 152,000 displaced people in horrific living conditions. 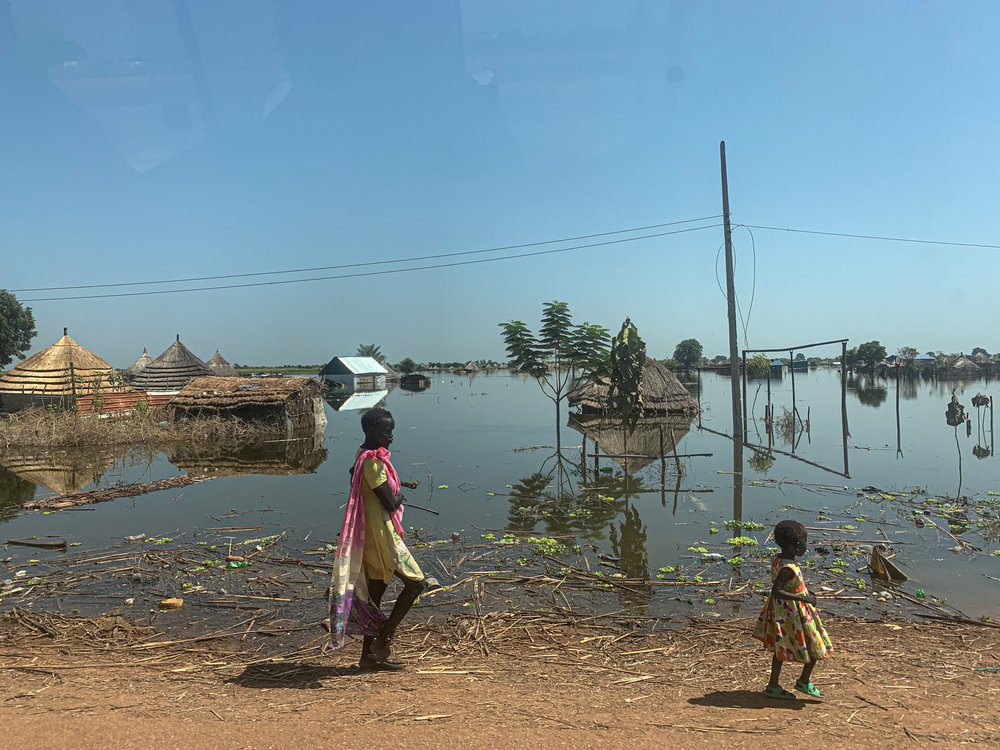 “The deplorable situation inside Bentiu displacement camp – the former Protection of Civilians site – is not a new phenomenon." 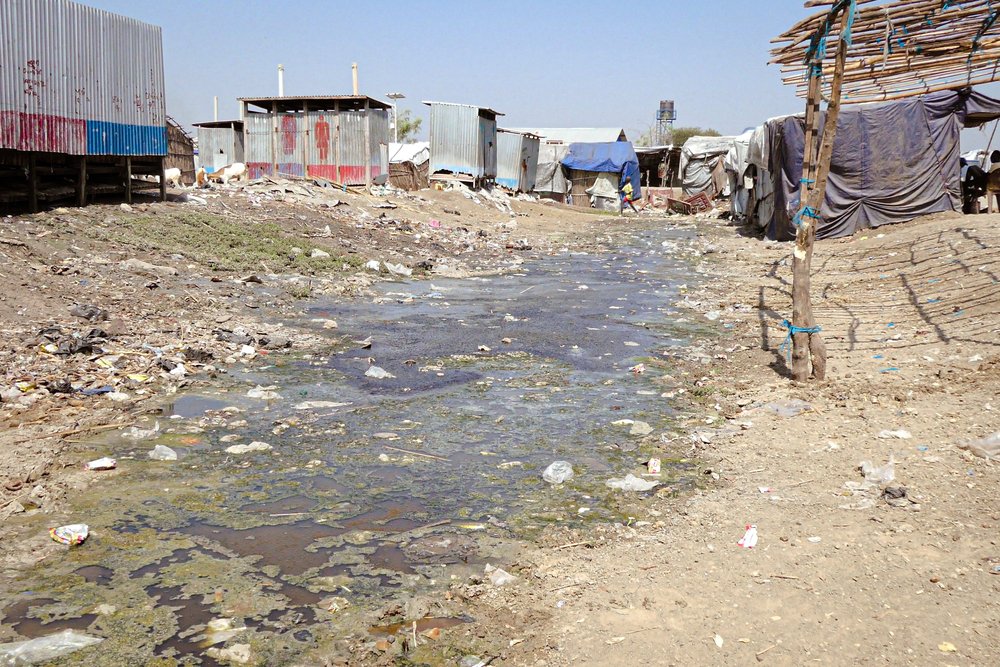 "For years, we have repeatedly warned about the dire conditions, yet other organisations and agencies responsible for the water and sanitation services in the camp have not sufficiently increased or adjusted their activities,” he says.

“Now we are facing a situation where even in this current crisis, there seems to be paralysis in action, resulting in horrific living conditions and huge health risks for the people living in Bentiu camp and across makeshift camps in Bentiu town,” says Turner.

This year’s floods have hit the people in Bentiu, the capital of Unity state, the hardest, while over 800,000 people across the country have been affected. 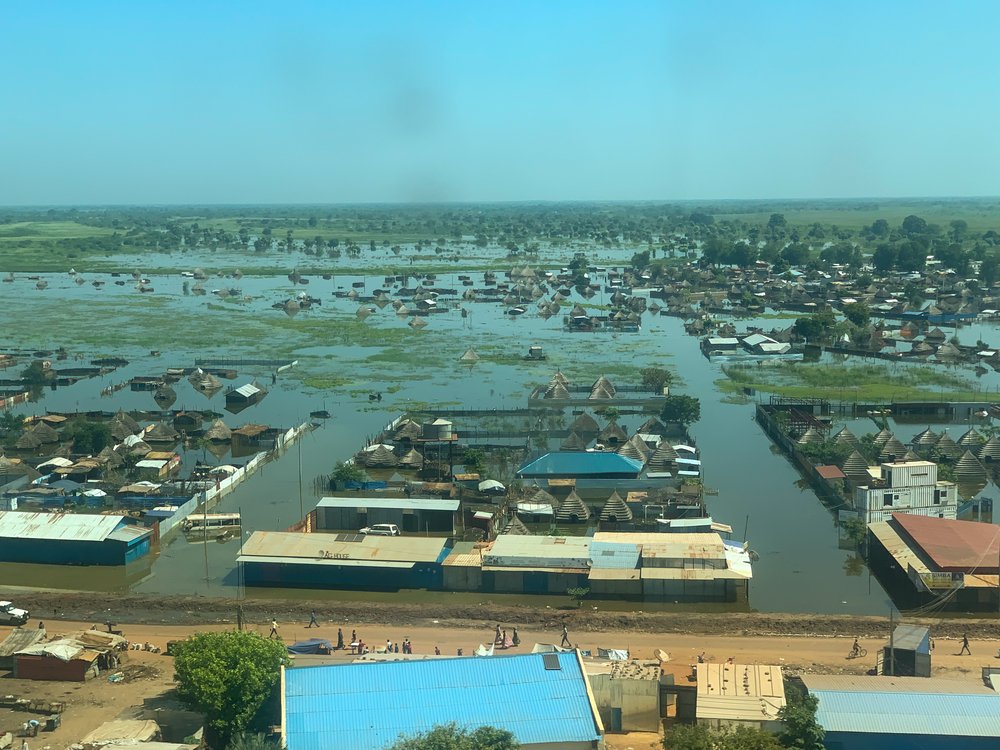 An estimated 32,000 people have fled rising floodwaters in the surrounding villages and counties of Guit and Nhyaldu, and are now living in four makeshift camps in Bentiu town.

Meanwhile, the number of people in Bentiu internally displaced persons camp (formerly a Protection of Civilians site) has grown by 12,000 in just a couple of months, and now holds at least 120,000 people, with thousands more likely to have arrived in the past weeks.

“When the floods came it destroyed everything. We had to leave our house."

“When the floods came it destroyed everything. We had to leave our house."

"Now we are suffering because we don’t have the essentials like plastic sheets, clean water, enough food,” says Johnson Gailuak, a 28-year-old man who was displaced by the floods. 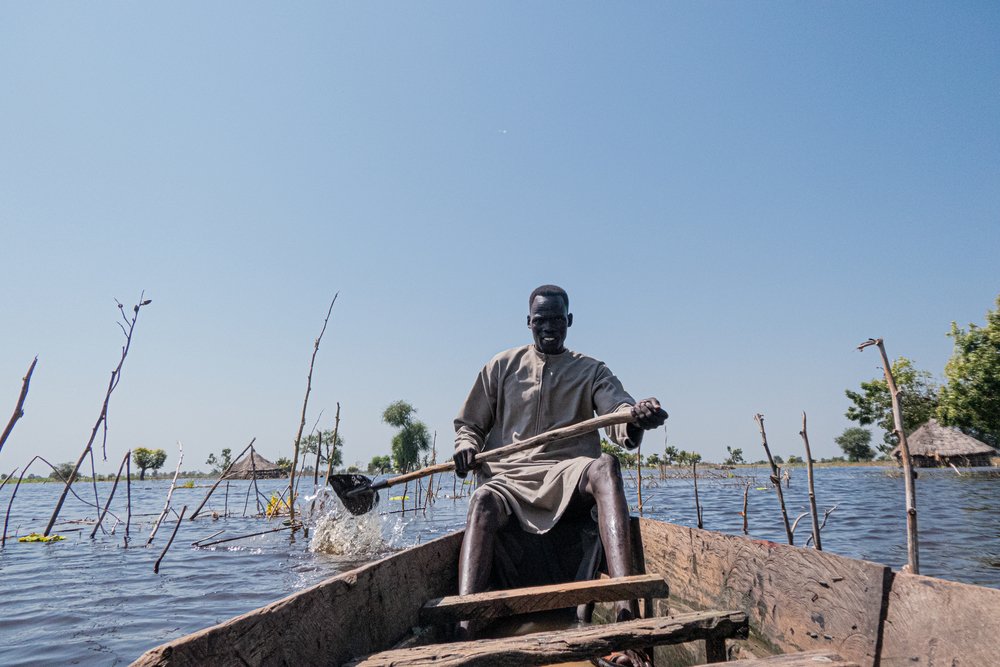 Njiri Karago/MSF
Johnson Gailuak, 28-years-old, was displaced by the floods in Unity state. He now lives in Makuany in Rubkona, Unity state.

“My wish for the future is that the water levels subside so that people can go back to their homes and for my family to have enough food,” he says.

With the influx of people in Bentiu camp, the MSF hospital is now completely over capacity.

So far, in November our teams have seen an average of 180 patients per day. 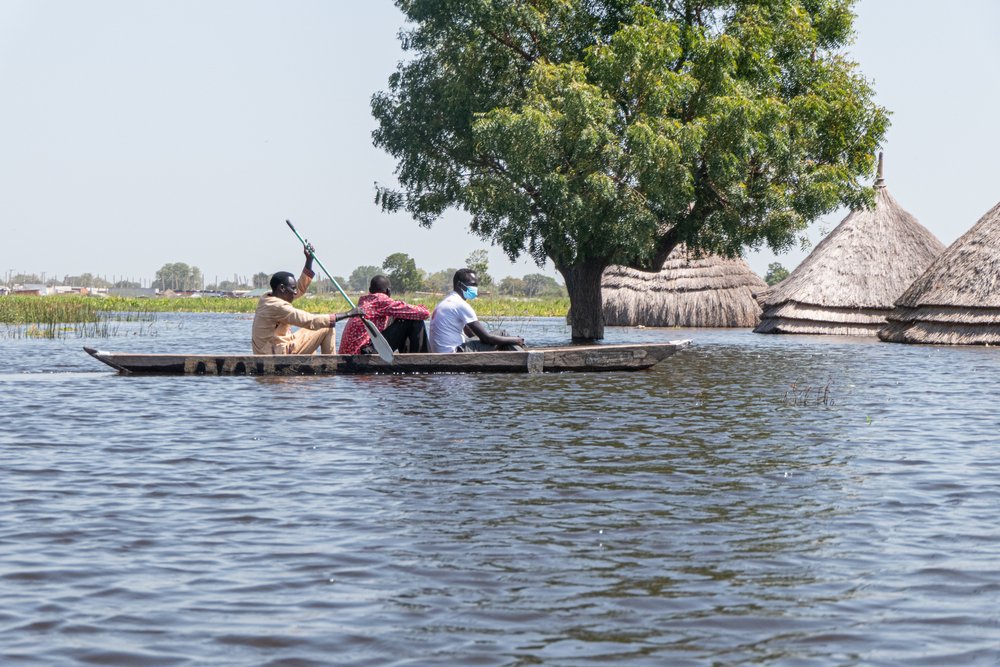 Njiri Karago/MSF
Men in a canoe navigate the flood waters in Bentiu, Unity state, where people’s homes and livelihoods (crops and cattle), as well as health facilities, schools, and markets, are completely submerged by floodwaters.

The majority of patients are children under the age of five suffering from malaria, respiratory tract infections and malnutrition.

We have added 45 extra beds to our existing 135-bed hospital, with a 35 per cent increase in admissions from August to October.

Our teams have had to convert a meeting room, as well as the remaining isolation capacity, into outpatient departments and a paediatric ward to accommodate the surge in patients. 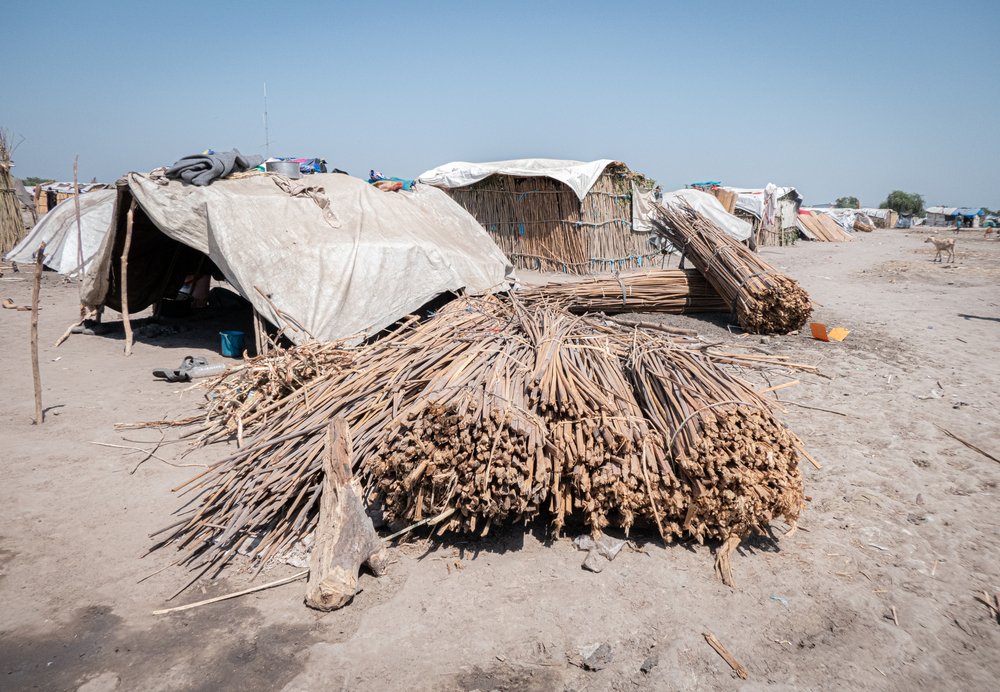 “We are extremely concerned about malnutrition, with severe acute malnutrition levels two times the WHO threshold, and the number of children admitted to our hospital with severe malnutrition doubling since the start of the floods,” says Jacob Goldberg, MSF emergency medical manager. 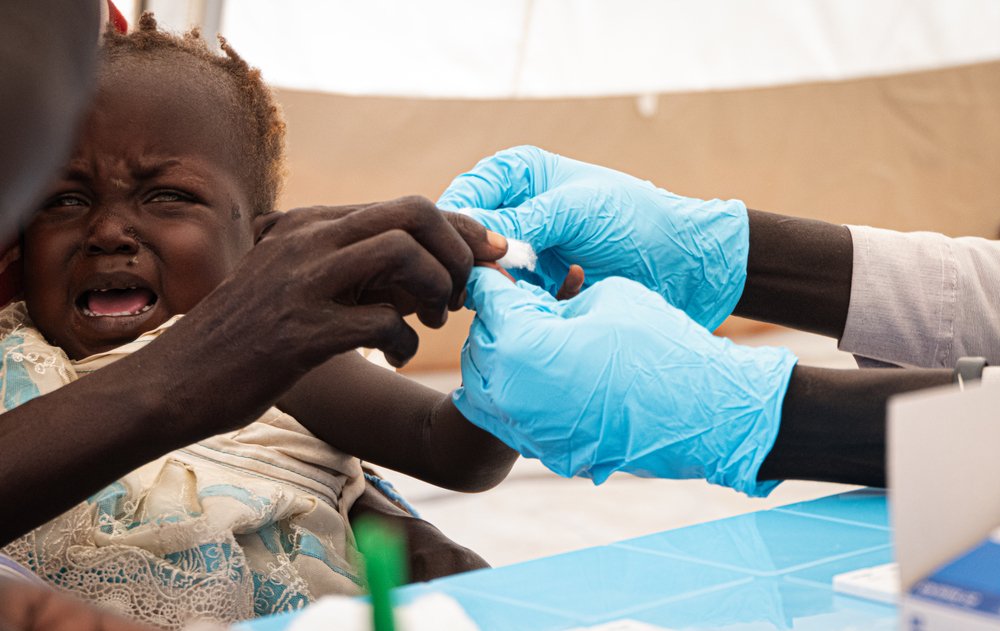 Njiri Karago/MSF
A baby is tested for malaria by the MSF medical team in a mobile clinic in Bentiu town, Unity state.

Meanwhile, the Bentiu state hospital is overstretched and the basic healthcare available is insufficient, with limited opening hours and no increase in bed capacity to deal with the high numbers of children with malnutrition.

In Bentiu camp, the living conditions are abhorrent.

The sewage treatment site has been cut off for weeks by flood water, meaning there are almost no usable latrines in the camp. 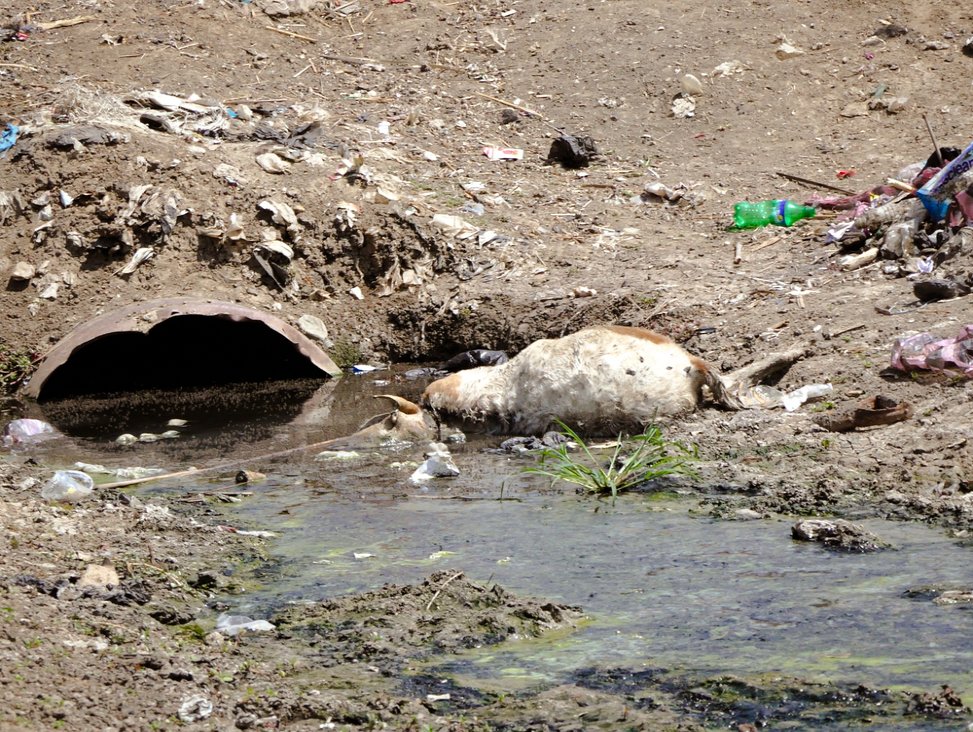 As more and more people arrive to the camp due to the flooding, there is visibly more open defecation, with excreta (faeces and urine) seeping from overflowing latrines into open drains.

Additionally, people do not have enough water or water storage, there is no garbage collection resulting in waste building up, while dead animals (goats and dogs) are left rotting in the drainage systems.

With the already deplorable conditions even further worsened by the influx of new arrivals, people are at higher risk to outbreaks and waterborne diseases such as acute watery diarrhoea, cholera and malaria. 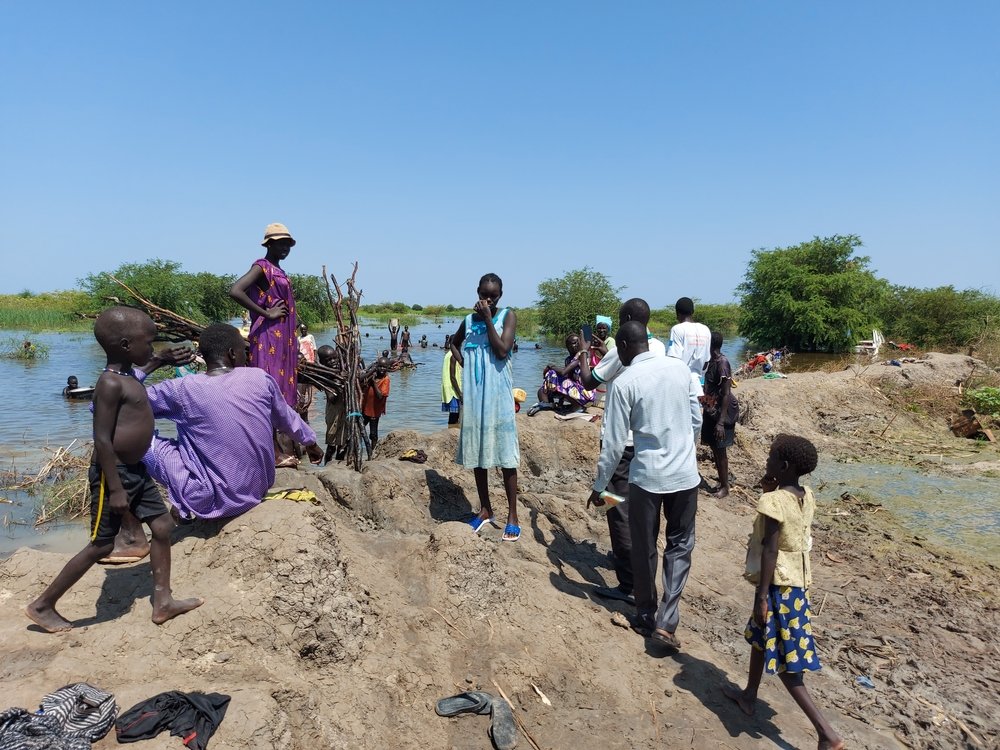 At the Bentiu town camps, the number of patients with malaria is extremely concerning – about 60 per cent of our mobile clinic consultations now focus on malaria patients.

When the waters recede, it creates a perfect breeding ground for mosquitos, while most people in the camps don’t even have mosquito nets, leaving them dangerously exposed to the disease. 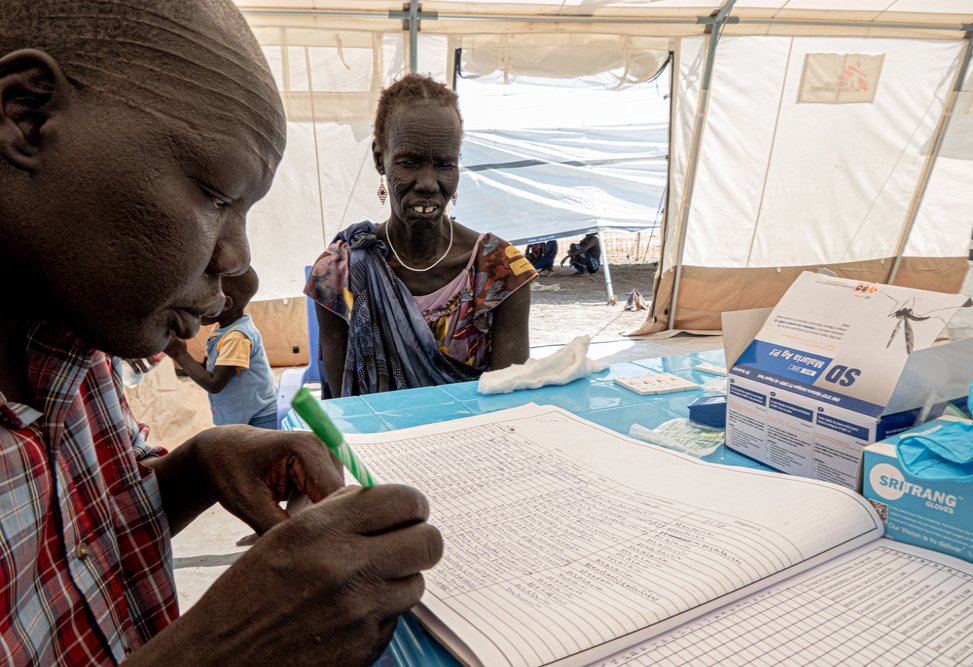 Njiri Karago/MSF
Nyaney Thot Machuol, who displaced by the floods and now living in a makeshift displaced persons camp, is tested and treated for malaria in the MSF mobile clinics in Bentiu town, Unity state.

Our medical teams are also starting to see an increase in acute watery diarrhoea in some of the camps, likely due to the poor water and sanitation conditions.

“With the hospital completely full, if there is a large outbreak of an infectious or waterborne disease, we won’t have enough space to properly respond,” says Goldberg.

MSF has quickly scaled up activities, and brought in an additional emergency team comprised of medical staff, water and sanitation advisors and emergency coordinators, to run mobile clinics in Bentiu town.

We will also run disease surveillance in Bentiu camp, and water and sanitation support with emergency latrine emptying, cleaning and repairs. 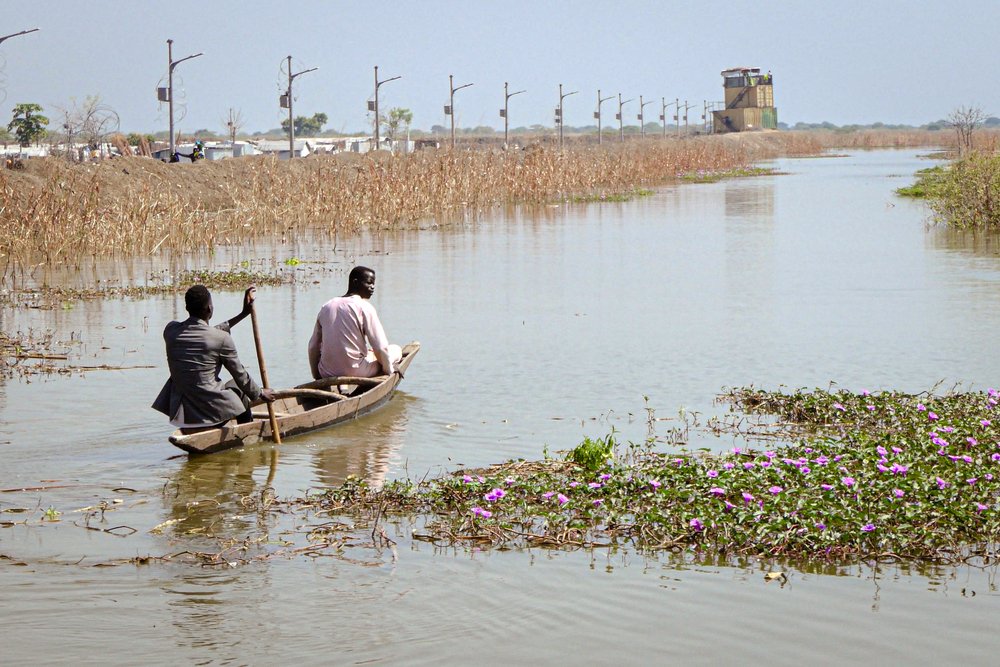 Njiri Karago/MSF
Two men use a canoe to navigate through floodwaters on the outskirts of Bentiu internally displaced persons camp.

But it is still not enough to meet the massive needs.

The humanitarian response from other organisations and agencies in Bentiu remains slow and insufficient, with donors only slowly coming forward with emergency funding.

"The humanitarian response in Bentiu needs to urgently shift gears"

“There is still not enough food assistance within or outside Bentiu camp despite the influx of displaced people, with food rations cut by half earlier this year. 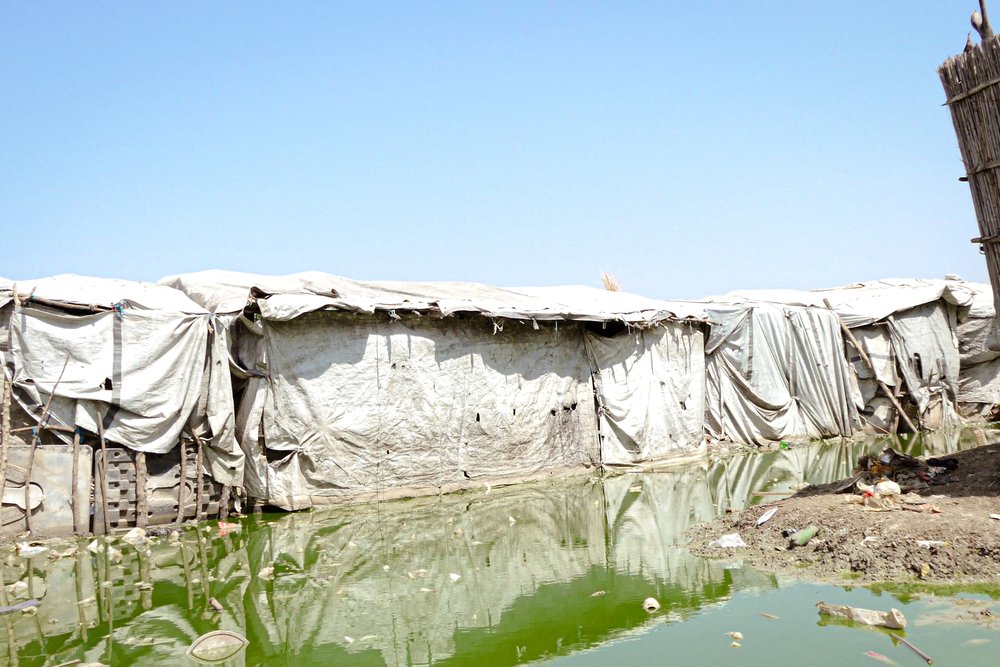 “Water and sanitation organisations and agencies have hardly scaled up activities despite abhorrent and dangerous conditions in the camps,” he says.

“People simply cannot continue to be forced to live in such undignified conditions, unnecessarily exposed to preventable diseases."

"Urgent action from other organisations and agencies is needed now”

MSF first started working in Bentiu, capital of Unity State, in 2000, providing medical care to displaced people who had fled violence and fighting.

In Bentiu town, the MSF clinic focuses on sexual and gender-based violence (SGBV) services and sexual and reproductive health, with outreach activities including health promotion and community engagement. 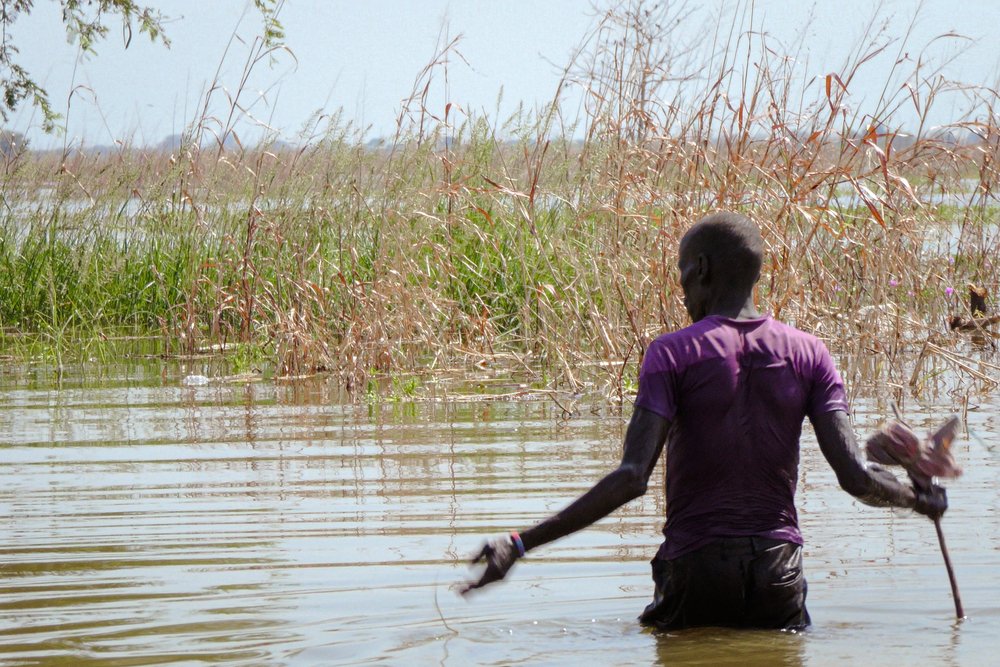 In Bentiu camp, the largest camp for displaced people in South Sudan, MSF has provided healthcare services since the formation of the camp in 2014.

We provide specialist healthcare, surgery and emergency services for adults and children in our hospital, as well as an outreach team within the camp, and emergency response capacity to respond to disease outbreaks.