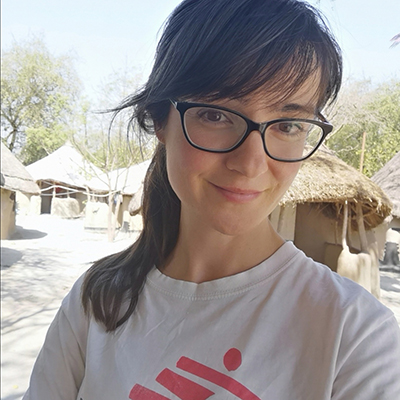 South Sudan: "There are only eight spaces on the plane"

The team at Lankien hospital in South Sudan are preparing for their first COVID-19 patients when a violent attack on a nearby town brings a crisis of a different kind. British doctor Jennifer Hulse shares this powerful eyewitness account from a "mass casualty event".

"For a while, South Sudan was one of the last countries in the world without a recorded case of COVID-19.

Throughout March and into April, I followed the progress of the virus on international news, watching the map of the world as neighbouring countries turned red, one by one, until we were surrounded.

Finally, inevitably, it reached us. Or at least it reached the capital, Juba. However, our hospital at Lankien is in an isolated rural location – a fact which grants us some protection, whilst simultaneously complicating the logistics of preparing for an outbreak.

Preparing for the pandemic

South Sudan is no stranger to epidemics of infectious disease.

Our hospital has an isolation ward leftover from last year’s cholera outbreak, which we quickly adapted. Stocks of emergency Ebola protective equipment could be re-purposed for Coronavirus.

"Unfortunately, even during a pandemic, other forgotten disasters quietly continue"

In fact, I’m sure the rest of the world could learn a great deal from African healthcare workers right now. Resilient and inventive, they have generations of experience facing highly infectious pathogens in difficult conditions, not to mention making painful decisions on the allocation of limited resources. 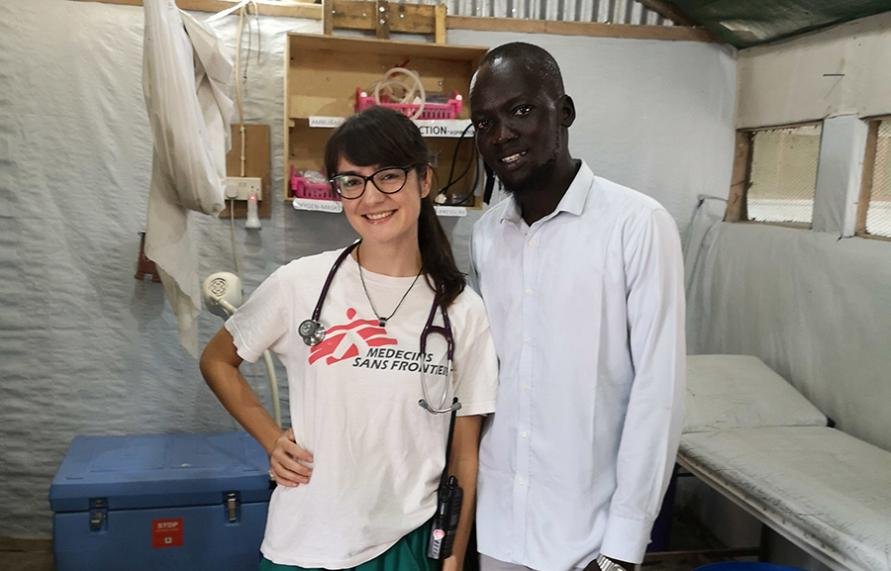 Even before the first case, the impact on our hospital was massive. How can we be “Doctors Without Borders”, when borders are closing everywhere?

Our already tenuous supply lines were suddenly further disrupted. Shipments of desperately needed medications could not get through.

Flight restrictions meant international staff were unable to enter or leave the country. Local staff worried for their families living abroad, many of whom left as refugees to neighbouring countries during years of internal conflict.

All of us struggled to imagine the impact of the virus on a community already fighting malnutrition, malaria, tuberculosis, kala azar, HIV and other deadly diseases, with an average life expectancy of around 58.

So, we started preparing. Training staff, writing guidelines, planning, building, educating the community, adapting what we have.

But, unfortunately, even during a pandemic, other forgotten disasters quietly continue…

In the early hours of Saturday 16 May, shortly after the first coronavirus case was finally confirmed at our location, there was a large-scale armed attack on the town of Pieri.

Around 50km from our hospital at Lankien, Pieri is home to a small satellite clinic, staffed by local clinical officers, nurses and midwives. The team there ran, hiding out in the bush to evade the heavily armed attackers.

The supervisor somehow had the presence of mind to grab the satellite phone and solar charger before escaping, meaning we were able to maintain some contact. Neither Lankien nor Pieri have mobile phone coverage, or electricity beyond diesel powered generators.

"We’d been so focused on pandemic planning. I still couldn’t believe it was happening now"

With little information available, we didn’t know what to expect. There were rumours of hundreds dead or injured – many would need treatment at our hospital. But, we only have 80 beds in the hospital, mostly already full, plus a two-bedded emergency room.

Lankien has a mass casualty plan. We’d held drills before, putting out practise major incident calls over the radio to run through our response. There were cupboards full of emergency supplies, checked and labelled and ready to go. Each member of staff had been assigned a role, each triage category an area.

Of course, a mass casualty situation is an ever-present possibility here, but I hadn't given it much thought recently. We’d been so focused on pandemic planning. I still couldn’t believe it was happening now.

We’d all been shaken by the news of our first positive COVID-19 swab result just the day before. Somehow, I expected only one disaster at a time.

Though Pieri is close, the dirt tracks are in poor condition. There are very few vehicles around, cars being useless for much of the year when whole stretches of road are underwater.

So, with fighting still ongoing and limited transport, the first casualties didn’t reach us until the evening. Around 20 to start with, though all weekend they continued to arrive in waves, day and night, another alert broadcast over the radios each time a truck pulled up outside.

By Tuesday, when it finally stopped, we’d had 60 people admitted with gunshot wounds in total. All treated by three doctors, two very experienced clinical officers and several excellent nurses, including one who thankfully specialises in wound care. And of course, despite all of this, the hospital’s usual patients still required attention. 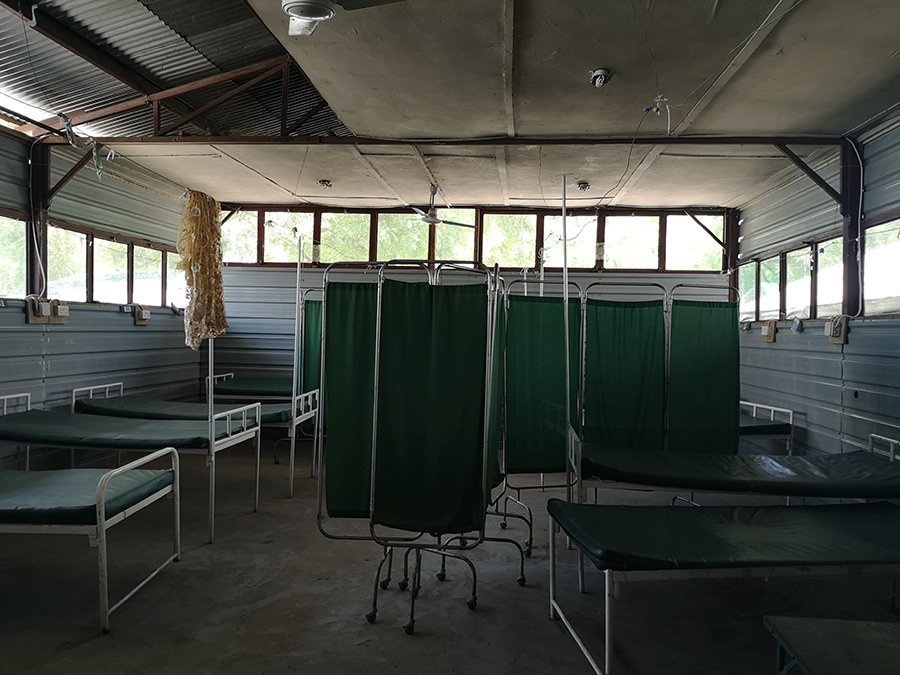 An overflow area set up for the ICU, just before patients started arriving

We quickly filled our official 80 beds, then started utilising other areas of the hospital.

We moved all paediatric patients over to the therapeutic feeding unit for malnourished babies, turning the children’s ward into a trauma unit. Female patients were moved out to the maternity department. These newly empty beds soon filled up again.

When the whole hospital was completely at capacity, our logistics team simply constructed an extra tented ward outside. My heart sank at the thought of putting injured patients in a tent, but when I saw it, I was amazed at what they’d built in just a few short hours.

As time went on, we became aware that some MSF staff were still unaccounted for. Eventually, it was confirmed that a nurse from Pieri was among the dead. Two Lankien staff were also injured, requiring admission to their own hospital. Overall, it is thought that up to 300 people died.

Incredibly, in spite of all they had been through, the team at Pieri returned to the clinic to assess the damage as soon as the fighting was over. They still treated wounded patients who were stranded there, despite the devastating loss of their colleague.

I never met the Pieri team, I knew them only through our satellite phone conversations, but I will never forget the extraordinary dedication and courage they showed.

The search for a surgeon

When things finally calmed down at the hospital, we were faced with a new problem. We have no surgeon here at Lankien.

Many of the gunshot wound patients required operations. Some of them needed urgent surgery within days, or they would die. We can transfuse blood, insert chest drains to re-inflate punctured lungs, clean wounds and cut away dead flesh to prevent infection, hold off overwhelming sepsis with medications, straighten broken bones and stop external bleeding.

We can do a lot for a small hospital with limited resources, but these patients needed more.

"The virus was blocking us at every turn"

Sometimes it is possible to transfer patients with such injuries by helicopter to a surgical hospital run by another medical organisation, but not only were they also overwhelmed with wounded, but they had also been forced to reduce their capacity due to COVID-19 and are currently unable to move patients between different regions for fear of spreading the virus to new places.

We can also refer patients to Bentiu, a bigger MSF hospital, but they have had no surgeon for months due to disruption caused by the pandemic.

MSF finally found a surgeon able to travel and managed to get her into the country, but she had only just arrived in South Sudan and was under two weeks mandatory quarantine in the capital, frustratingly close but unable to help.

The virus was blocking us at every turn.

Eventually, six days after the incident, following a lot of negotiation and advocacy from our coordination team, we got permission to transfer a maximum of eight patients to a different surgical hospital in the capital.

"This choice was one of the most difficult situations I have ever faced. There was no right answer"

However, there was a further complication with transport. The MSF plane can fit eight patients if they are all sitting, but only five if the pilots remove seats to accommodate stretchers. The issue now was choosing who to send. 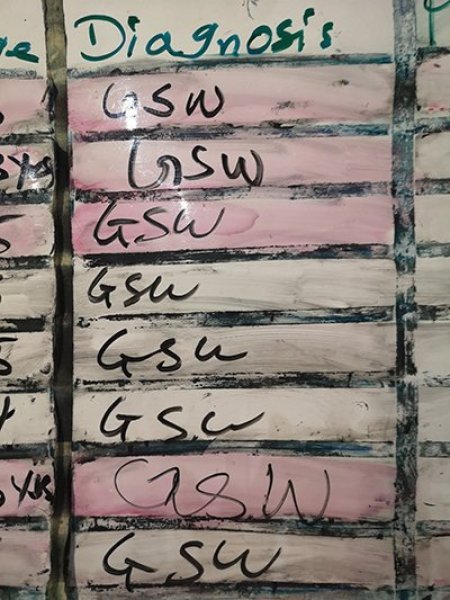 I considered our options as I walked around the intensive care unit, my area of the hospital, where the sickest patients were located.

There were those who were obviously critically unwell, but uncertain to survive the flight. Those who looked less serious but had injuries that I knew were a ticking time bomb. Those who were suffering but would survive without surgery, or could wait for a delayed operation. Those whose we could not help, with or without transfer.

Trying to make this choice was one of the most difficult situations I have ever faced. There was no right answer. There was also not a lot of time, as we only found out the night before that the plane was to come in the morning.

We decided all the patients would have to do the journey seated. I spoke to them, the ones with abdominal injuries or terrible wounds who I knew would find it hardest. They all agreed they could try if it meant fitting more people on the plane. We practised sitting upright in bed to check it was possible.

The next morning, as we heard the plane’s engines approaching in the distance, we gave each patient a shot of morphine and anti-nausea medication, then lined them up on stretchers just inside the hospital gates. The whole town had assembled to watch, despite our guards’ best efforts to form a perimeter around the plane.

The team carried the patients to the dirt airstrip, then lifted them up and manoeuvred them into the seats, some of them a dead weight with no strength to move. We struggled not to tangle their heavy limbs and IV lines and tubes, in a tiny space too small for us to stand. Each patient was propped up with blankets, then strapped in place.

It’s only 90 minutes, we kept reassuring them, and ourselves. I was anxious it wouldn't work and we'd have to remove seats to put in stretchers, meaning I'd have to choose three patients to take off the plane.

"I felt a huge sense of relief as the plane rumbled down the dirt airstrip and disappeared. Nobody was going to die on us for lack of surgery"

Somehow, they managed. It probably wasn't the worst journey they had made. All of them had come to the hospital via a whole day’s ride in the back of a truck, packed together with other injured men, without the benefit of painkillers and wound dressings.

Weeks later, as I write this, I now know that all of them are alive and recovering.

Normal in these times 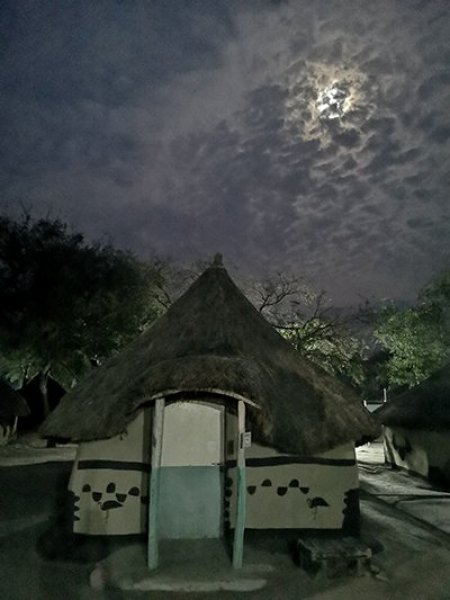 The night sky above the tukul huts where the team sleep
I felt a huge sense of relief as the plane rumbled down the dirt airstrip and disappeared. Nobody was going to die on us for lack of surgery. The worst was over. The hospital was still full and there were at least 10 more patients that needed operations, but they were stable and we had time to figure out a plan for them.

I was so incredibly proud of how the team had handled the whole incident. We could start picking up the pieces and get back to normal, whatever normal looks like in these times.

Exactly one week later, I was on the same plane, sick with fever and being evacuated to Juba with possible COVID-19. As it turns out, normal was still a long way off."

how we are fighting the covid-19 pandemic >