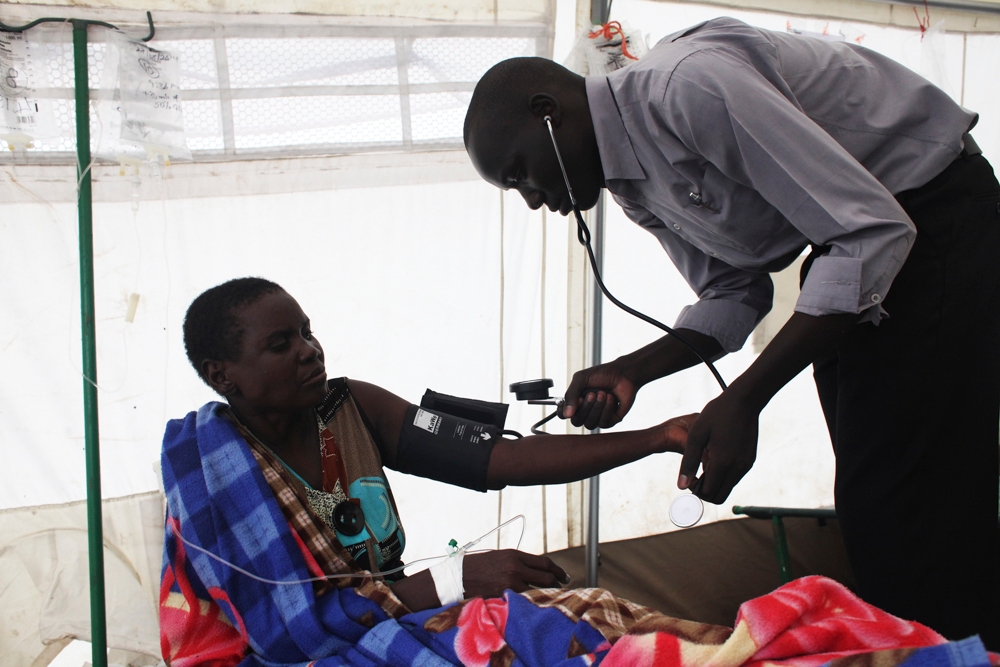 As the cholera outbreak enters its fourth week in Juba, the South Sudanese capital, 29 people have lost their lives and 1,306 people have been treated for the disease.

MSF is running three cholera treatment centres (CTCs) and three oral rehydration points (ORPs) in key areas of the city. Its medical teams have already provided cholera treatment to 282 people and are in the midst of building two additional CTCs and further ORPs.

MSF is also continuing to provide technical assistance to the Ministry of Health to help reduce the burden on Juba Teaching Hospital. This week MSF sent an additional four staff there to spray the shoes of all patients and caretakers with specially chlorinated water that kills cholera bacteria. MSF plans to further scale up water and sanitation support to the hospital to help increase infection control.

Emergency on top of emergencies

“This cholera outbreak is an emergency on top of multiple other emergencies facing an extremely vulnerable population. It comes at a time when a million people are displaced and MSF teams are also seeing worrying levels of malnutrition in several locations spikes in malaria cases, and dealing with other disease outbreaks, such as kala azar.

At least there haven’t been significant surges in the cholera outbreak over the last weeks. Though cholera patient numbers are rising, the current pattern seems to involve a steady increase of patients across a number of days, followed by subsequent days where the numbers seeking treatment begin to decrease.

Right now, we appear to be in one of the lower trough stages. When the outbreak enters a trough phase, people start to relax. However, the peak after each trough is a little higher than the previous peak. So there is no room for complacency, as patient numbers could escalate again.

Efforts to prevent the further spread of cholera must continue, including health promotion and community awareness. This will need to be accompanied by a persistent scale up of treatment facilities in areas where patients are unable to reach specialised care quickly.

As cholera causes severe dehydration and even death within a matter of hours, it is essential that people have access to free, quality treatment in the shortest possible time.

In addition, the treatment facilities must be open 24 hours a day, as cholera doesn’t stop spreading when the sun goes down.

In a city where many people don’t have enough money to pay for transport, it’s worrying if life-saving care is not close in a cholera outbreak. The Ministry of Health has organized a free-phone system for people to call ambulances that will transfer patients for free to Juba Teaching Hospital, which is an important initiative.

However, there is the risk that some people may still not make it on time. For instance, the poorest families often don’t own a mobile phone to make that vital ambulance call.

Additionally, it will also take time for knowledge of that free number to fully spread into communities. Finally, the ambulances are trying to cover a large city, crisscrossed by bad, congested roads. All these factors can result in worrying delays in reaching punctual treatment.

MSF is opening two additional CTCs over the next weeks in the eastern and southern parts of Juba to ensure that more people can access closer treatment facilities.

The first will be a 20-bed facility in the eastern Gumbo area, separated from the rest of the city by a bridge that spans the River Nile. MSF has already treated 48 patients at its oral rehydration point in this area. When people arrive we provide them with oral rehydration salts to replace fluids lost in diarrhoea or vomiting.

We then transfer the most severe cases to a CTC so they can receive fluids through an intravenous drip. Final agreements on the exact location of MSF’s fifth CTC in the Hai Jabel area of the city have just been finalised, so that construction could begin today.

The fact that cholera hasn’t entered Juba’s water supply is a major relief. If the water source became contaminated, this could create a serious spike in the numbers of people requiring urgent treatment. As the rainy season intensifies, it will be essential to remain vigilant.

In particular we are keeping a watchful eye on heavily populated areas, where the disease can rapidly spread.  A possible outbreak in the two camps for displaced people in Juba had already been anticipated. Each camp is home to more than 14,000 people, living in dire conditions.

The camp population was vaccinated against cholera earlier this year as a precaution. As well as providing treatment in MSF CTCs in each of the camps, our teams are also conducting intensive community mobilization and health promotion activities in both places.

If cholera outbreaks were to start in other parts of the country, it would be a bad development. Earlier this week we were extremely worried to hear of cholera cases in Yei, Juba’s neighbouring county. MSF immediately donated 10 cholera beds to health officials there.

At the start of next week a team of three MSF staff will conduct an assessment in Yei to see if we can assist. However, it seems that the situation is currently under control, that there has not been an increase in suspected cases over the last few days, which is encouraging.

Elsewhere in the country, our teams have treated small numbers of suspected cases in special cholera units they built in existing MSF projects.

So far there is no cause for alarm in those areas. We will just have to wait and see how things develop with this outbreak over the coming weeks. As it’s hard to predict, MSF teams will continue to be proactive and prepared to respond.”