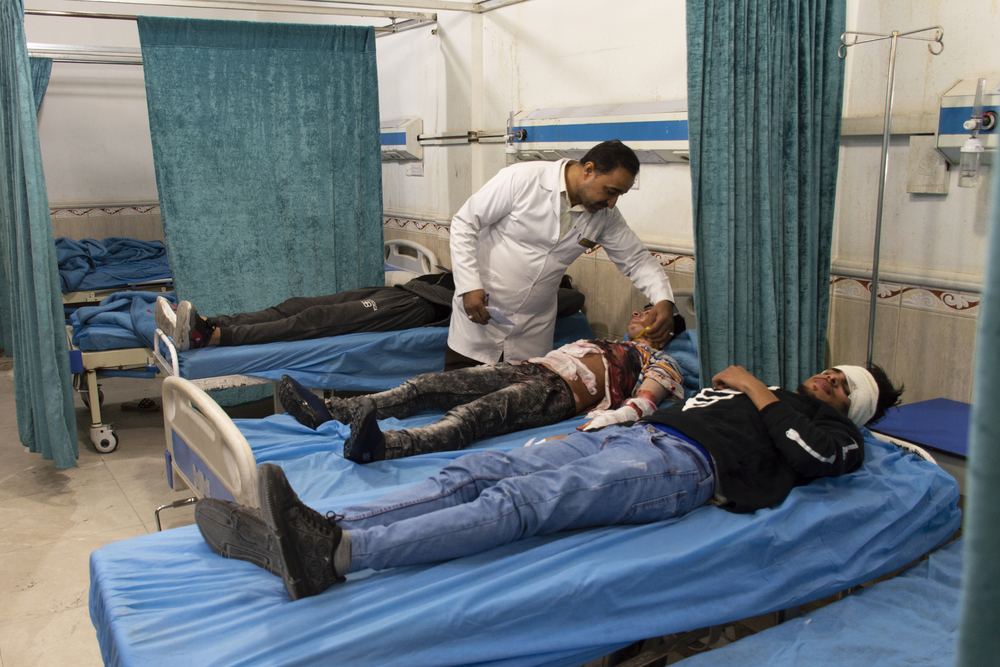 As protests persist to rock Iraq southern city of Nasiriyah, the capital of Dhi Qaar province, Médecins Sans Frontières (MSF) continues to extend a hand to local hospitals. The organisation helps these facilities scale up their preparedness for mass casualty incidents, whether due to recent violence accompanying the protests or any other event leading to an influx of wounded.

On October 1, large-scale protests erupted in the Iraqi capital Baghdad. These were soon echoed in other cities of the country’ south. In Nasiriyah, intermittent spells of violence included the use of live ammunition and deployment of tear gas canisters and left scores of people dead, wounded or permanently maimed.

Since December 2019, MSF has been supporting the emergency department of Al-Hussein Hospital there, by working with experienced local staff on boosting preparedness for mass casualty incidents and thereby render dealing with a sudden influx of patients more efficient.

Additional training on trauma care has also been provided to further strengthen the skills of doctors and nurses at the emergency department, focusing on critical injuries. While adaptations were made to work spaces to accommodate more patients, medical equipment was also donated to the facility.

Furthermore, in collaboration with the department of health, volunteers providing first aid and paramedics in the city were trained by MSF to improve their capacities of dealing with wounded people. First aid kits were also donated to the volunteer medics.

Further west, in the southern province of Najaf, where millions of Muslims from Iraq and beyond converge at Muslim shrines for the two observances of Ashura and Arbaeen annually – sometimes leading to stampedes, MSF has also provided support to local health facilities.

There too, demonstrations have been taking place for the past few months. MSF has been providing mass casualty incident plan (MCIP) trainings to local staff at Al-Hakim General Hospital, Al-Sadr Teaching Hospital and Al-Furat Central Hospital, helping in better dealing with an abrupt flow of patients. 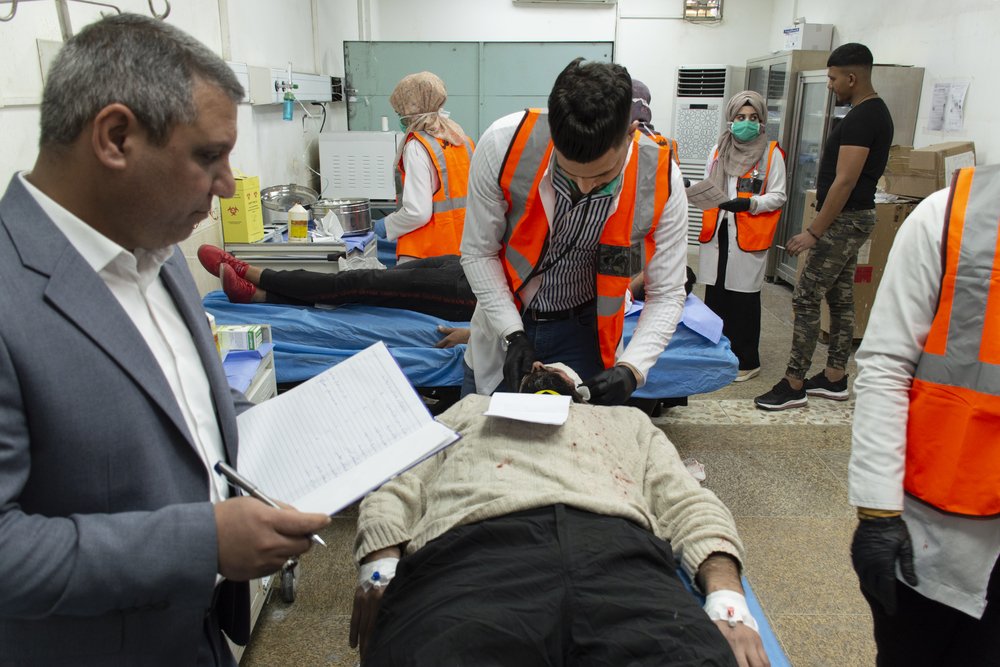 MSF/Hassan Kamal Al-Deen
A simulated patient being examined by a nurse during a mass casualty simulation at Al-Hakim General Hospital in Najaf governorate, Iraq, while an observer (on the left) is taking notes about the steps.

“Regardless of the ongoing demonstrations in the province, Najaf often witnesses mass-casualty incidents,” says MSF Doctor Mohammed Ali. “A mass casualty incident plan is a multidisciplinary process that involves medical and non-medical areas in and out health facilities to coordinate together amidst instability”, he adds.

The doctor, who oversaw the training, further explains that “the focus is on preventing to convey the chaos from the incident scene into the emergency room at the hospital and on enabling facilities to provide health care to emergency patients without any hindrance.”

These hospitals in Nasiriyah and Najaf are two of many in the country that have been swamped with abundant numbers of wounded people in the past months, but the capital Baghdad, where the first spark of the protests was ignited, took the brunt of the violence. 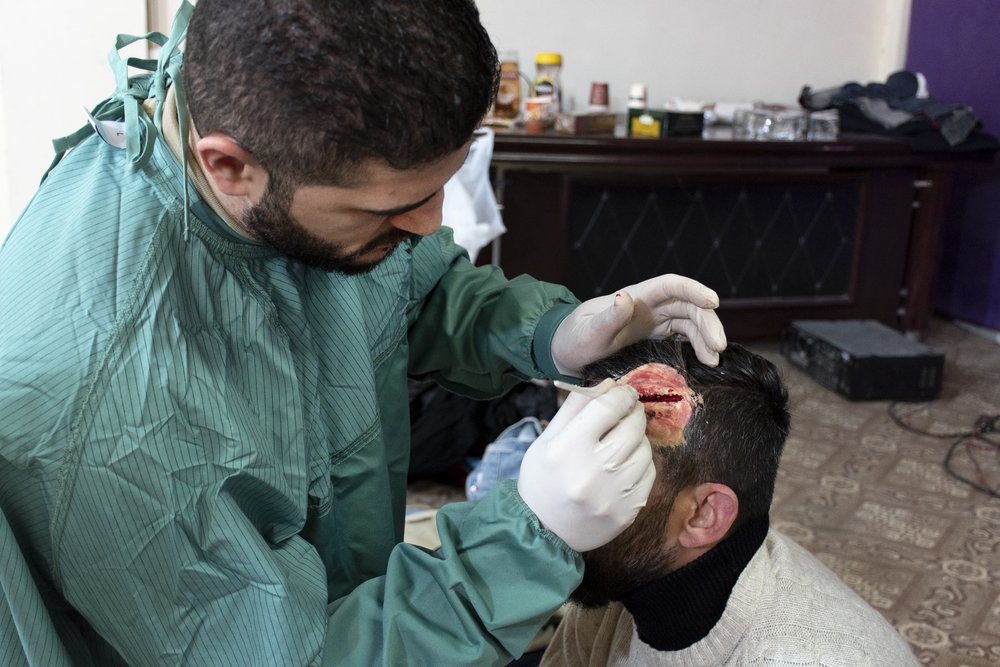 MSF/Hassan Kamal Al-Deen
A volunteer being prepared to act as a simulated patient for a mass casualty simulation, planned and supervised by MSF in collaboration with the directorate of health, in Al-Hakim General Hospital at Najaf governorate, Iraq.

“From the first day of the protests, MSF kept a close eye on the situation in Baghdad and reached out to local health facilities to identify their needs. We supported some with donations of emergency medical supplies,” explains Shaukat Muttaqi, MSF’s Head of Mission in Iraq.

In the closest hospital to al-Tahrir square, the heart of protests in Baghdad, a makeshift emergency service unit was set up in collaboration with local staff to assess the severity of wounds, and either treat or refer patients to other hospitals in the city. 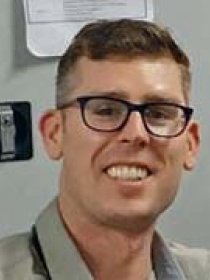 Iraq: "Every day I'm filled with admiration for the resilience of the people here" >

Meanwhile, the capacity of the Baghdad Medical Rehabilitation Centre (BMRC) was increased from 20 to 30 beds to receive more patients referred to the facility after undergoing surgeries in other hospitals in the city. There, patients benefit from early physiotherapy, post-operative care and mental health support to ease and treat the psychological burden of the injuries.

Médecins Sans Frontières (MSF) has been working in Iraq since 1991. With more than 1,500 staff in Iraq, the organization provides free, high quality healthcare for all people regardless of race, religion, gender or political affiliation.

MSF is an independent medical humanitarian movement that aims to deliver emergency medical care where it is needed most, and when it will save lives. MSF works in nearly 70 countries worldwide.

MSF offers neutral and impartial medical assistance regardless of race, religion, gender or political affiliation. To ensure its independence, MSF does not accept funding from any government or international agency for its programs in Iraq, relying solely on private donations from around the world to carry out its operations.