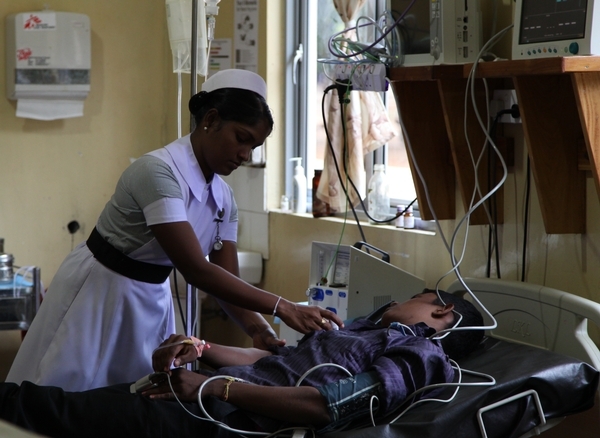 International medical humanitarian organisation Médecins Sans Frontières/Doctors Without Borders (MSF) has handed over its last remaining activities in Mullaitivu district, Sri Lanka, having first worked in the country in 1986.

The handover of the mental health programme in August 2012 to an established international NGO with a long-term operational plan for the north of the country follows a progressive transfer of medical activities to the Ministry of Health during the last 18 months.

“The District General Hospital of Mullaitivu was almost non-functioning back in 2010 when MSF decided to provide support to enhance access to health care during the resettlement period for the internally displaced people,” said MSF Programme Manager for Sri Lanka Marie Ouannes.

“The partnership with the Ministry of Health teams, either in Colombo or at provincial level, led to much better access to health facilities for communities in Mullaitivu district.

"In terms of human resources, the government is also scaling up staff in these structures, which means MSF can now reallocate these resources to emergency contexts where medical services and facilities are in shorter supply.”

In 2012, MSF gradually handed over its responsibilities in the 80-bed Mullaitivu Hospital to the Ministry of Health. During 2011, around 5,000 consultations took place in the emergency unit, MSF surgeons performed 1,004 major surgeries, 329 babies were delivered and 2,295 women received antenatal care.

In order to provide access to primary healthcare and referral specialist services for isolated populations in parts of Mullaitivu district at the time, MSF began a mobile clinic project in December 2010. Throughout 2011, mobile clinics conducted 200 primary health care consultations at five different sites per week, or 11,524 for the entire year, mostly in Puthukkudiyiruppu division.

Numerous communities in areas affected by the fighting witnessed deeply traumatic events that took place during the last phase of the civil war. While the physical scars may have healed for many, considerable mental health care needs remain. Many lost everything during the war and face new difficulties in the resettlement process.

Drawing on extensive experience of working in conflict and post-conflict settings, MSF launched mental health activities in 2009, in collaboration with the Ministry of Health and the College of Psychiatrists, first in Menik Farm – a camp for hundreds of thousands of people displaced by the war – and later in eight different sites in Mullaitivu district, including inside a specially built structure on the grounds of Mullaitivu Hospital.

As many sick people were unable to travel to health facilities due to a lack of public transport and money, mobile mental health teams had to travel to very remote areas to reach patients.

The community outreach programme conducted group counselling sessions for pupils in schools in the region and provided training for teachers to identify children with mental health conditions.

In August 2012, MSF handed over its mental health programme - its last remaining activity in the country – to World Vision.

“While not in the acute post-conflict phase, mental health needs in the Vanni are still significant, despite the war having ended more than three years ago,” said MSF psychologist Gaia Quaranta.

“Specialised skills and a long-term approach to community rehabilitation is required to address these issues, which is why we call on other organisations with a long-term future presence in the area to continue providing mental health care support for local communities.”

In recent years, in addition to improvements in infrastructure and health facilities, access to the affected areas has improved for non-government organisations.

“As a medical humanitarian organisation specialising in emergencies, MSF must allocate our limited resources to where the health needs of neglected populations are greatest,” said Marie Ouannes.

“In the north of Sri Lanka, other actors that are better suited to a long-term recovery process are now able to reach the populations in need of care.”

MSF will continue to monitor the situation in Sri Lanka and stands ready to return to the country to provide emergency medical support if the need arises.

MSF worked in Sri Lanka from 1986 to 2003 until the cease-fire agreement, returning in 2004 for six months to assist in the tsunami recovery efforts before initiating new activities in May 2006 in response to the escalating conflict in the north of the country. MSF handed over its last activity in August 2012.