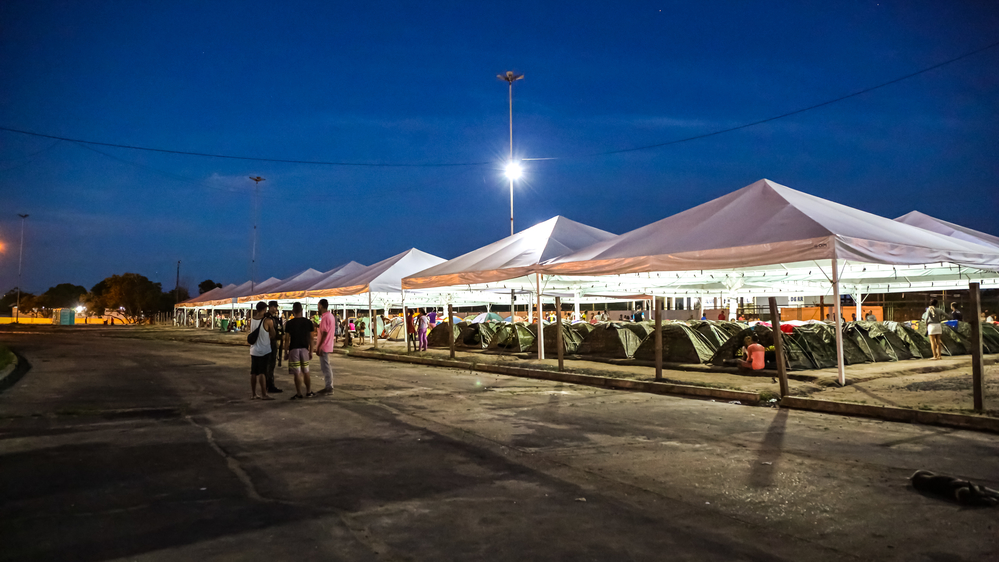 The struggle of Venezuelan migrants and asylum seekers in northern Brazil

Thousands of people who fled crisis-ridden Venezuela now live in precarious conditions and struggle to find proper medical care in the Brazilian state of Roraima.

The northern state of Roraima is the main gateway into Brazil for Venezuelans fleeing the ongoing economic, political and social crisis in their country. The influx of migrants and asylum seekers into Brazil has increased a lot since 2017. Currently, about 600 Venezuelans enter Roraima every day.

According to official figures, about 40,000 migrants and asylum seekers now live in Boa Vista, the state capital. According to informal estimates there are around 100,000 Venezuelans in Roraima, one-fifth of the state’s population, most in difficult conditions. The state has the least developed economy in the country and a fragile health system, lacking doctors and medical supplies. The state’s infrastructure is struggling to cope with this large influx of Venezuelans.

Roraima has set up 13 official shelters, all of which are operating at full capacity. The shelters are hosting around 6,000 people, half of them children, as most Venezuelans who came to Brazil brought their families with them. A much larger number of people live outside the shelters, in buildings in poor conditions or abandoned, or on the street. In Boa Vista, around 23,000 Venezuelans currently live in very damaged buildings and more than 3,000 live on the street.

The hardships faced by the migrants and asylum seekers not hosted in shelters have a direct impact on their health. “We treat conditions related to the lack of hygiene and sanitation, such as diarrhoea. There are also many people with flu symptoms, pneumonia, sinusitis and otitis. Intestinal parasites or scabies are common as well,” explains MSF physician Mariana Valente. She works at a health centre run by the Boa Vista municipality, in the 13 de Setembro district, an area where a lot of Venezuelan migrants and asylum seekers are currently living.

People living on the street usually find refuge in an area behind Boa Vista´s bus station. Every day when the sun sets, more than a thousand migrants and asylum seekers set up a small ‘tent town’ in an open roofed area. Few people own tents, but the army lends them to those without, usually small ones, shared between two or three people. Mattresses are not provided and people who don´t own one sleep directly on the ground.

“There´s a lot of dust and dirty water in this place, many things that are making us and our children sick,” says Cezar Martínez, a Venezuelan man who spends his nights near the bus station with his wife and three children. At night, people who stay there are also given free dinner at a cafeteria next to the campsite. However, the area must be cleared each morning at 6 am and only people who are sick can stay there during the day. Cezar says that the situation they are in is particularly difficult but adds that he feels thankful for all the organisations and ordinary Brazilians who are helping his family and other Venezuelans. A significant number of Venezuelans are also living in abandoned buildings, with no electricity and poor access to water.

Living conditions in the 13 official shelters are basic but worse in the two shelters dedicated to host indigenous groups: Janokoida, in the town of Pacaraima, and Pintolândia in Boa Vista.

In Pintolândia, more than 500 members of the Warao ethnic group and 30 members of the E´ñepá ethnic group live in dozens of tents and hundreds of hammocks. Most hammocks are installed in what used to be a multisport court. The shelter is located below street level; a layer of gravel covers the ground to prevent it from being permanently wet. But when the rain comes, the area floods and the tents, as well as the resident´s few belongings, get soaked.

Israel, a member of the Warao group, cleans his family´s tent after it floods. “It rained a lot the other day. The mattresses and the children’s clothes got very wet,” he says, with a tired look on his face. “Not only can the area easily become flooded, but we are in an equatorial region so it rains very hard,” explains Sara Lopes, an MSF water and sanitation technician. “Part of our drainage plan was executed, but more needs to be done.”

For now, water points in the shelter remain scarce. The water used to wash pots, pans and clothes must be carried from outside in buckets and toilets are frequently clogged. In the communal kitchen, people cook on open fires. They eat whatever is given to them, usually beef and rice. But even in the kitchen, sanitary conditions are far from optimal. The ever-present humidity and poor hygiene increases the spread of mosquitoes and cockroaches, which can quickly lead to an increase in diseases.

People in the Pintolândia shelter also do not have the prospect of improving their situation, as they are not included in the Brazilian ‘interiorisation’ programme. The government and UN-sponsored scheme allows migrants and asylum seekers and their families to be voluntarily transferred to other areas of the country, but indigenous people cannot apply for the programme.

“It’s like taking a bird, putting it in a cage, giving him what he doesn’t want. That´s the way the indigenous live here,” describes Delio Silva, a member of the Warao group who lives in Pintolândia. Stuck in this limbo, some of them still try their best to improve their conditions and work to make ends meet. Women make and sell crafts made from buriti (a local palm tree) fiber, while men collect scrap metal on the streets of Boa Vista. They use the money to buy food to supplement their diet, such as vegetables, river fish and flour. No matter their situation, indigenous people find it particularly important to prepare their own meals.

Other migrants and asylum seekers also try to remain positive, despite the daily adversities. “I had to make my family understand that everything is good,” says Ricardo Calzadía, who now lives at the Jardim Floresta shelter with his wife, Milagros, and daughter, Saraí. He proudly explains that, by remaining optimistic, he was able to enrol his eight-year-old daughter at a school that is one hour by foot from the shelter. He makes the daily journey, back and forth, with Saraí.

Ricardo, another Venezuelan who could afford a comfortable life back in Venezuela,  says: “Before, we used to eat, just the three of us, in our house. Now we share a cafeteria with 600 other families. We also share the bathroom with them. The family has grown… Sometimes you have to look at things in a positive way. It will help us to move on”, he adds, trying to put a smile on his face.

MSF started activities in the Brazilian state of Roraima at the end of 2018. Since then, its goal has been to help improve medical care for Venezuelan migrants and asylum seekers and the local population. MSF provides medical consultations, mental health assistance and technical advice about water and sanitation, and runs health promotion activities.

Columbia: The uncertain lives of Venezuelan migrants on the Colombian border >