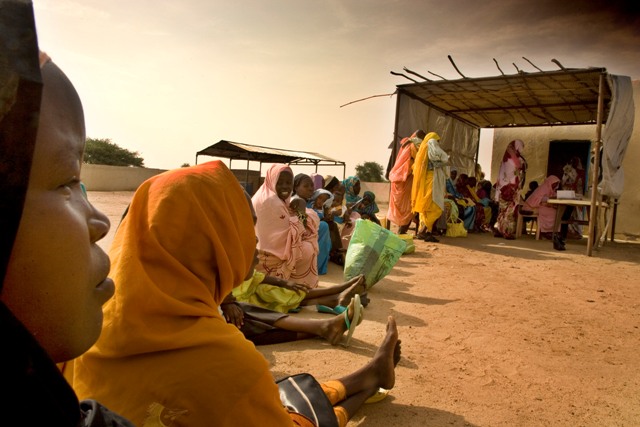 Renewed fighting in North Darfur state during the last two months, between government and opposition groups, has forced thousands of families to flee from their villages, says the international medical humanitarian organization, Médecins Sans Frontières/Doctors Without Borders (MSF). MSF teams are now responding to immediate medical needs by providing medical humanitarian assistance to the newly displaced people who are living in precarious conditions in several camps in Shangil Tobaya, Dar Alsalam, and Tabit.

"People fled suddenly and arrived with nothing but their clothes. Initially they set up makeshift shelters made out of their clothes and grass, to help protect them from the cold nights. MSF is providing plastic sheeting, blankets, mats, soap and jerry cans that will help people cope with their most basic needs", explains Cristina Falconi, MSF head of mission in Sudan. “Now that all the attention is focused on southern Sudan’s referendum, we shouldn't forget that there are pressing medical needs in Darfur."

Ten days ago in the aftermath of fighting in the area of Tabit, MSF distributed essential household items to more than 500 people who have sought refuge in nearby Jerno locality. This fighting was the latest in a series of clashes that began in mid-December with heavy clashes in Shangil Tobaya. During the hostilities, the Ministry of Health hospital, supported by MSF, was caught in the crossfire, forcing patients and staff to flee. Following this incident, some 7,000 newly displaced people gathered in two different camps near Shangil Tobaya town.

Some days after the fighting in Shangil Tobaya, MSF managed to provide a medical emergency response in the camps to help the newly displaced people cope with their immediate needs. A new clinic has been set up inside one of the camps and is currently providing 100 outpatient consultations per day. MSF has also distributed highly nutritious, vitamin-rich food to around 4,000 children under the age of five. Additional needs are being addressed by other organizations in the area.

MSF is also supporting a vaccination campaign sponsored by UNICEF and the Ministry of Health, reaching more than 3,000 children and 200 pregnant women in and around Shangil Tobaya.

Elsewhere, in South Darfur state, fighting in early December 2010 also displaced thousands of additional families.  Currently, an MSF team is finalizing an assessment to determine the most urgent needs of hundreds of displaced families in Shaeria locality. MSF is also setting up a nutrition program, in collaboration with the Ministry of Health, to address serious levels of malnutrition for people that have been suffering from continuing violence and poor access to health care.

MSF continues to provide primary and secondary healthcare in Darfur, including paediatric and reproductive healthcare, and counselling services, in Kaguro, Dar Zaghawa, Tawila and Shangil Tobaya.

MSF has been working in Sudan since 1979 providing free-of-charge medical assistance to people suffering from the effects of armed conflict, poor access to healthcare, floods, droughts, disease outbreaks and nutritional emergencies.