“We had no food, no work and ended up with no home; my house was totally destroyed by the rain, that’s when I had to leave with my five-year-old and six-month-old children. I had to leave my nine-year-old son behind as I couldn’t afford the bus ticket for the four of us.” Amel is a South Sudanese from Gok Mashar who is now in Kario Camp, in Sudan’s East Darfur.

“I came here to Kario camp hoping that the situation would be better, but I’ve been living with my children in this reception tent with all the newcomers for a month now, still without a proper shelter.”

Kario camp reception centre is the first stop for South Sudanese newcomers waiting to be accommodated in Kario Camp. The camp registration unit receives refugees every day, most of them from South Sudan.

The MSF mobile team goes there twice a week to assess the health conditions of the new arrivals: vaccination, malnutrition screening and referral to the MSF facility in Kario are provided. 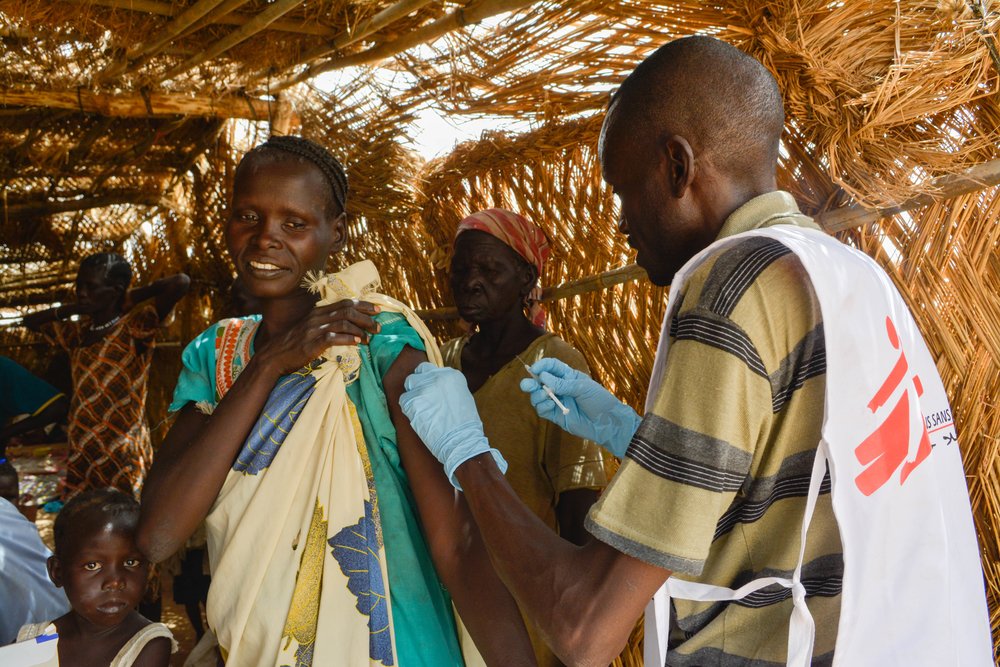 MSF/Jinane Saad
MSF sends a mobile clinic team to the Kario reception centre regularly to do the medical check-up of new arrivals, check their routine vaccinations’ and their nutritional status

South Sudanese drifting back to Sudan

The violence and conflict in South Sudan have displaced millions, with roughly one third of the population having fled their homes. In East Darfur, many had left Sudan for South Sudan after 2011 independence, but are now forced to go back as a result of the ongoing conflict.

Currently there are more than 750,000 South Sudanese refugees in Sudan according to UNHCR. Around 100,000 of them are in East Darfur, where MSF set up its hospital in July 2017 in Kario camp. The camp is the biggest refugee settlement in East Darfur, and today hosts around 20,000 refugees.

Vanessa Rossi, MSF Field Coordinator in East Darfur described the living conditions of the refugees in Kario camp: “Most of them don’t have a regular income, sometimes they work in the farms with the locals, but it’s seasonal work of course.”

“They are living in shelters made of local materials like wood and grass. Usually big families of 5 to 10 persons live in one small shelter in a very crowded space. The camp is full right now, people share the latrines outside their houses, which are filthy and muddy. The rainy season is approaching, and it’s going to be very long and difficult. Both in the camp and outside there will be many swamps and pools with stagnated water.”
VANESSA ROSS   MSF FIELD COORDINATOR

The living conditions in Kario camp are worrying. People don’t have enough food, and this is particularly impacting children, and pregnant and lactating mothers. If this continues, there is a high probability that severe malnutrition cases will increase, particularly at the start of the lean season, between May and October.

Mohamed Zakria, MSF doctor, describes the health situation in the camp, saying: “Because of the heat and dust, we have many cases of upper respiratory tract infections, especially among children under five, in addition to pneumonia, dehydration, and some cases of malaria.”

Zakria continues: “We also treat many cases of neonatal sepsis, a bacterial blood infection in a newborn baby, and puerperal sepsis, which is a genital infection that happens during labour or after. This happens because many deliveries occur at home without the proper hygienic conditions. We need to work more on health education in the camp and in the local community”. 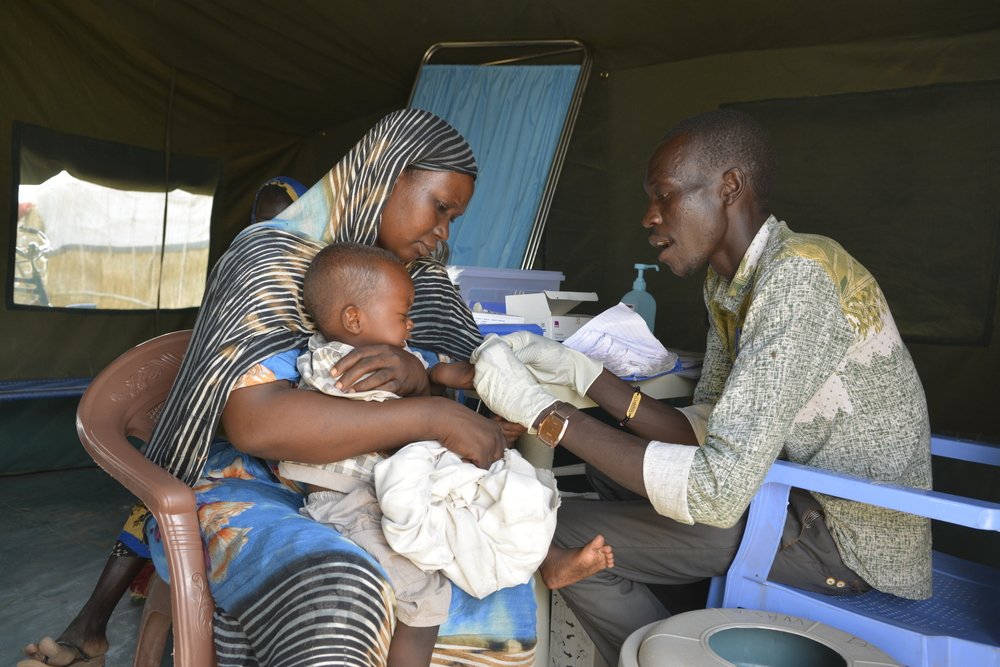 The positive impact of the MSF project in Kario Camp, East Darfur

Ibrahim Korina, a Sudanese community leader in the Kario administrative unit, and one of the representatives of the community, was asked about MSF’s services in Kario camp, and he said:  “MSF’s health services are available and accessible to both refugees and locals in Kario. MSF’s presence in this region is essential for the prevention of, and the response to, the health needs of the population”. 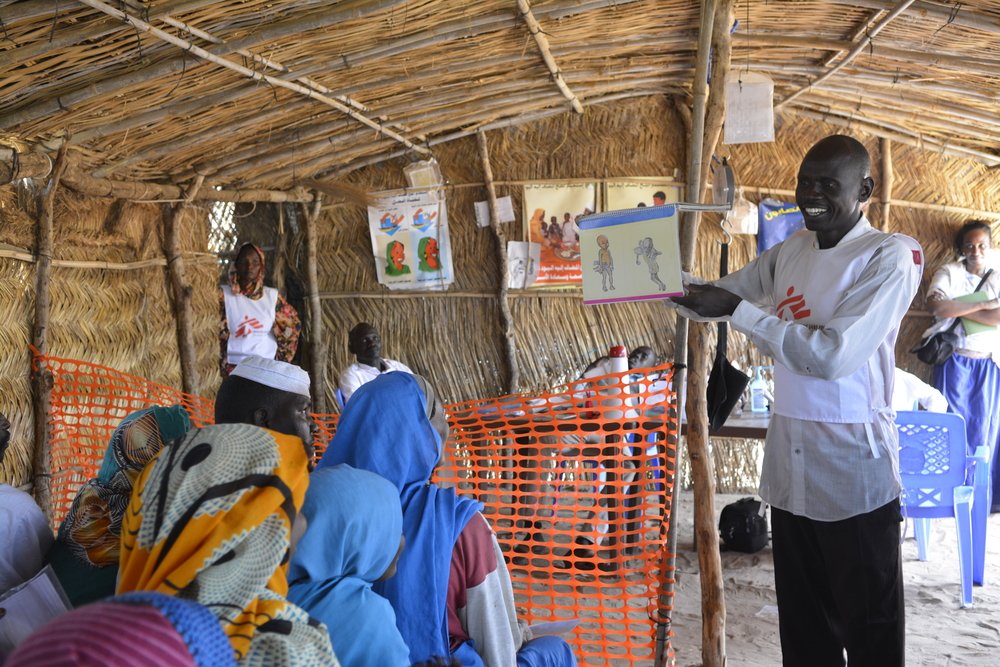 MSF/Jinane Saad
Antony, MSF’s health promoter, is giving a session about the importance of breastfeeding to patients in the waiting area.

The health facility receives between 200 and 300 consultations per day in the outpatient department, and they include both refugees and members of the host community. The inpatient department has 20 beds and emergency cases are referred to Ed-Daein City Hospital.

Dar Alnaeem, 20 years old, lives in Kario village. She says: “In the past, we used to deliver babies at home with the assistance of a traditional midwife from our community, because there was no health centre available in the area. When I knew about the opening of a maternity unit in the MSF centre, I decided to deliver here, it’s safer. After the delivery I was under observation with my baby for 24 hours, that’s how we discovered that he needs to be kept in the centre for follow up”.

Since the AWD outbreak took place last year, prevention is one of MSF’s main concerns. “At least when we are present here we can detect any possible outbreak and quickly apply the necessary measures to prevent further transmissions and possible outbreaks,” said Vanessa. 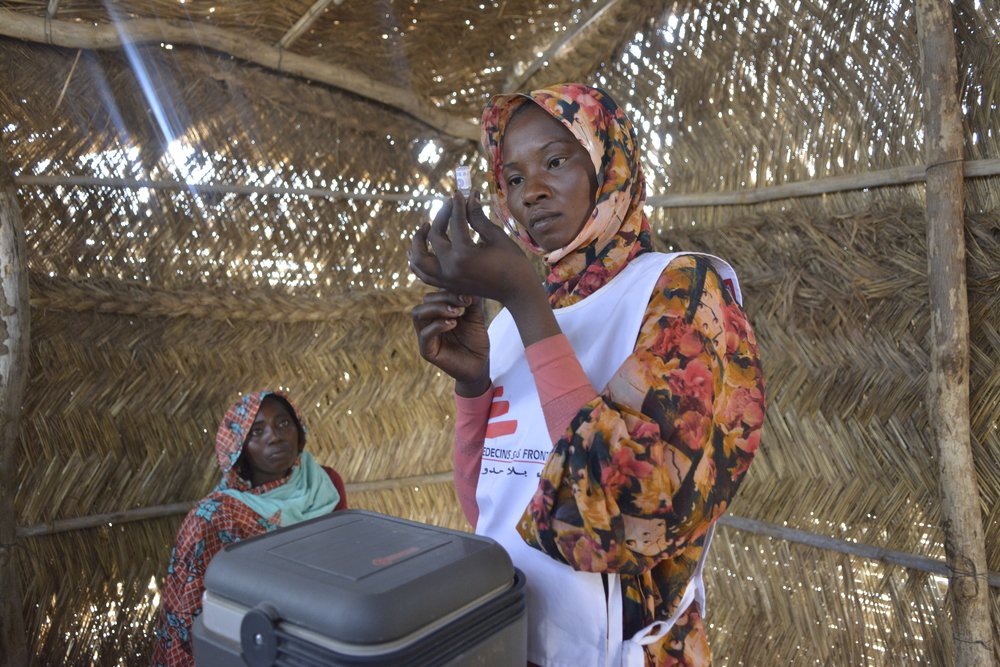 MSF/Jinane Saad
In the vaccination room of MSF Health Centre in Kario camp, Samia is doing vaccinations for women and children.

In December, MSF vaccinated 19,000 children against measles during a one-week immunization campaign. On a daily basis, a team of 25 community workers walks in the camp and provides health prevention messages.

MSF Kario hospital is improving and expanding its health services to meet the needs of the increasing number of patients.

But despite the improved access to healthcare, living conditions for people in the camp remain dire. There are some concerns about the extent to which basic needs like food, latrines, water, sanitation, and suitable shelters are met. Especially in the reception centre, the dehumanizing living conditions are impacting on people’s mental health. That is why other humanitarian actors should improve the quality of their services, and ensure proper monitoring mechanisms are in place to evaluate the activities and their impact. Currently, aid delivered in Kario is far below humanitarian standards.