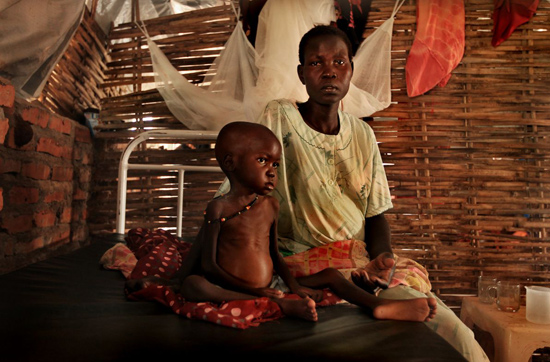 MSF teams are struggling to provide urgent medical assistance following violent clashes in the Abyei region of Sudan as the security situation continues to deteriorate.

MSF is responding to the consequences of fighting in the Abyei region of Sudan following violent clashes that began on the night of Friday 20 May. Whole towns have been emptied and thousands of people are on the move in a bid to escape the fighting. The situation in the area remains extremely volatile. The population left their homes with few belongings, and travelling conditions are particularly harsh now that the rainy season has started and the roads are muddy.

“We have witnessed a massive movement of people out of Agok towards the south –especially on Monday night,” says MSF head of mission Raphael Gorgeu. “We have seen thousands of people – mainly women and children – carrying bags on their heads, or sitting on mats on the side of the road, exhausted by hours of walking.  The populations of both Abyei and Agok have been displaced and are spread out in several different areas: near Turalei, near Mayen-Abun and on the road to Agok.”

Providing medical care on the road

MSF medical teams have been assisting the displaced as they flee the fighting.

“Our teams have been on the roads between Turalei and Agok, where the displaced people are scattered,” says Gorgeu. “There are severe signs of dehydration among many children who are on the move. We are very concerned about the harsh conditions the displaced population has to endure on the roads. Their health condition can deteriorate rapidly if assistance is not delivered promptly. Our efforts are oriented towards delivering assistance in an effective and timely manner.”

The fighting occurred principally in the town of Abyei. By Saturday 21 May, the whole town lay empty after the entire population had fled their homes. MSF suspended all primary healthcare activities in the town, while MSF’s hospital in Agok, 40 km south of Abyei, received 50 wounded in the fighting over the weekend.

A rehydration point was set up within Agok hospital. Most of the inpatients in Agok were discharged and given two weeks’ rations of ready-to-use therapeutic food. The hospital currently continues to provide basic healthcare services to the population. MSF is also setting up a base in Turalei, to support surgical activities in an existing health centre. Medical supplies and basic non-food items such as shelters, mosquito nets, soap and plastic sheeting were also sent to Turalei.

Médecins Sans Frontières/Doctors Without Borders (MSF) has been providing emergency medical humanitarian assistance in Sudan since 1979. MSF currently runs 27 projects across 13 states of the country. MSF has been working in the Abyei region since 2006, providing primary healthcare services in Abyei town, including antenatal care and treatment for malnutrition. In 2010, the team provided 18,534 outpatient consultations. Deliveries and other serious cases are referred to the MSF hospital in Agok, which provides a wide range of services including surgical, maternity, inpatient and outpatient care, a paediatric unit, a tuberculosis ward and a therapeutic feeding centre for malnourished children. In 2010, there were 31,199 outpatient consultations. In January 2011, a fully-functioning operating theatre was opened in the hospital in Agok.