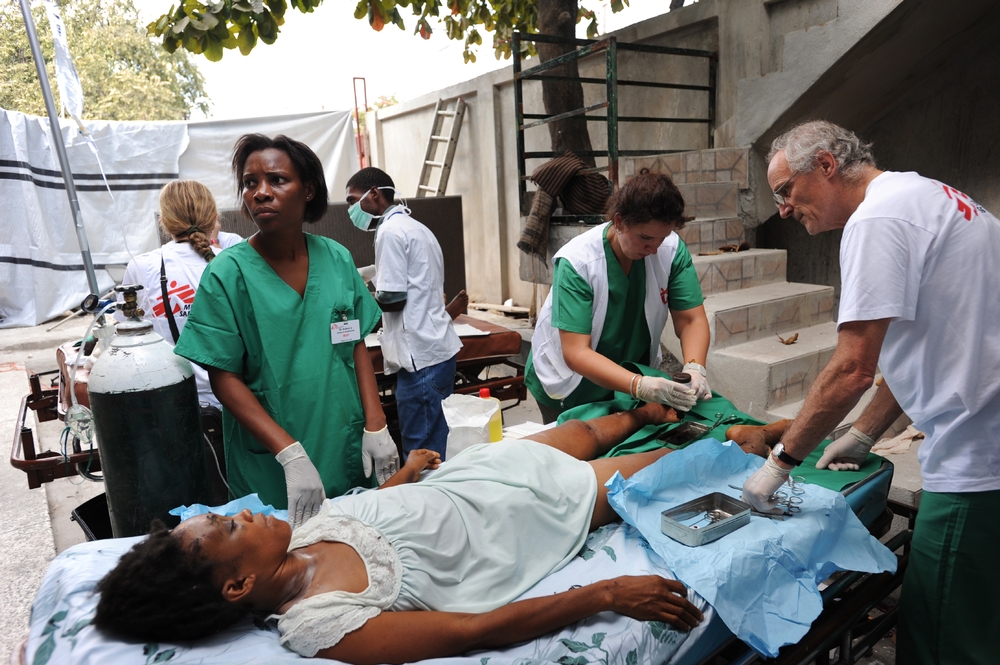 The Sunday Business Post: In the heat of the fight

Paul McMaster, the president of Médecins Sans Frontières for Ireland and Britain, spends much of his time dodging bullets and avoiding rocket fire in dangerous locations, but sees his work as the logical continuation of a veteran surgeon’s career, writes Susan Mitchell.

In South Sudan, he woke to the smell of burning in the middle of the night, an attack imminent. When I venture that this must have been a stressful experience, he replies: “I’m a devout coward, Susan. When people are pointing guns at me, I can run faster than anybody.”

Frankly, that is hard to believe. McMaster, who is the president of Médecins Sans Frontières for Ireland and Britain, has worked in some of the most dangerous places in the world, including Somalia, Sri Lanka, the Ivory Coast, Haiti and Afghanistan.

Having spent 35 years in academic surgery in England, where he mixed surgery, research work and teaching, he has devoted his “retirement” to treating patients in the developing world. “When I stepped down at 60, I knew I wanted to help. I’m immensely privileged that I’m able to do something at the end of my career that I wanted to do as a young man,” he says.

He clearly made his mark in Birmingham, where he was a transplant surgeon. In a recent interview, another surgeon at that hospital described how McMaster “used to get in his own car – an old police Jaguar – and drive to the donor hospital, which could be anywhere in the country, perform the donor operation, and then bring the liver back to Birmingham and transplant it the same day”.

McMaster describes himself as an “ordinary” doctor, but it is clear there is nothing ordinary about him. Soon after he retired, he worked in Kenya, then on projects with MSF in Burundi, Rwanda and the Democratic Republic of Congo. The last-named country was his first experience of a war setting. After that, he spent six months in Somalia.

“In many war zones, the surgery is not terribly complicated, it’s a lot of gunshot wounds to the legs. The skill comes in dealing with very limited resources, such as shortages of blood supplies, or no X-rays or electricity,” he says.

“The earthquake in Haiti was quite devastating, because the limited health structures that they had were destroyed. It was very difficult in those early days. The earthquake happened on January 12, and our team arrived the following night. I had been involved after earthquakes in other places like Pakistan, but the scale of this was just enormous.”

The aftershocks prevented the medical and nursing teams from working in any buildings that had survived the quake. Instead they operated outside, under trees.

While Haiti was the most difficult natural disaster McMaster has faced, he lists Sri Lanka and South Sudan as the toughest conflict zones. “I felt immense sadness coming out of Haiti, but it was a natural disaster. With Sri Lanka, I left wondering how human beings can do things like that to each other. I had the same feeling about South Sudan,” he says.

After it achieved full independence from Sudan in 2011, its aid money and oil revenue were largely used to pay for an expanding army and to enrich the country’s new elite. When the oil income shrank, due to chronic instability and the pipeline’s periodic closure, the army and the elite were set against each other.

“To reach an agreement a few years ago [with the North], and to have all that excitement about independence and all the hope that came with it, and see that implode and people turn on each other so viciously is just . . .” McMaster trails off.

A recent report in the Economist summed up the situation as follows: “Even in a civil war that has been rife with atrocities, the scale of the massacre of civilians in South Sudan’s oil hub of Bentiu on April 15-16 plumbed a new depth of hell. The rebel White Army, so-called after the ash its fighters sometimes smear on themselves, killed anyone they suspected of supporting the government, including – it is reported – 200 people in a single mosque, and others in churches and aid agency compounds.”

McMaster got the call-up for the assignment to South Sudan just days before Christmas. Two days after he was wrapping gifts, he was treating patients. How did his family feel?

“They understand it. I could never have sat there eating my Christmas pudding, knowing how difficult it would have been for younger colleagues who hadn’t been exposed to that kind of situation. They needed the dinosaurs with experience,” he says.

McMaster says the past six months have been a particularly demanding period for MSF, with the civil war in Syria, the typhoon in the Philippines, the ethnic and religious violence in the Central African Republic, and the situation in South Sudan all presenting huge challenges.

“One of the things that is extraordinary about MSF is the capacity to respond quickly in a crisis,” he says. The inflatable field hospital developed by the charity enables a functioning hospital with an operating theatre to be set up in disaster areas in about three days.

MSF encourages donors to give unrestricted funds, which means the charity can spend them where the need is greatest. It has a significant emergency reserve fund, meaning that there is no delay in mobilising, no wait for government funds to be released and no lag as donation appeals are launched.

It deliberately restricts the amount of money it will accept from governments. This, McMaster says, is critical to MSF’s commitment to independence, neutrality and impartiality.

“These ideals have driven every aspect of our work since MSF was established by four doctors in 1971. We are completely apolitical,” he says.

His recent trip to Dublin was to let donors and potential recruits know about their work. “People in Ireland have been immensely generous. So has Irish Aid,” he says.

McMaster was also here to provide a boost to MSF’s drive to generate greater awareness about the crisis in South Sudan, where it is currently trying to contain a cholera outbreak in the capital, Juba. “There are about a million people displaced internally. It’s a tragic situation,” he says.

Many of the personal tragedies have left their mark on McMaster. “I remember being called at about midnight to a little girl of 11 or 12 who had come in virtually unconscious,” he recalls. “I saw her three or four hours later. She was awake and she was making progress.

“Then the nurse explained a little bit of her history to me. She and her little brother had been separated from their mother, and had walked for four days with no food and very little water. We might have saved her life, but we haven’t solved all her problems. You just feel wholly inadequate.”

MSF has thousands of volunteers and employees of all nationalities on assignments across the world. It also employs tens of thousands of nationals in the countries where it works. It is constantly looking to recruit doctors, nurses, pharmacists, engineers and logistics experts.

McMaster says recruiting can be a struggle at times. “Understandably, families are not keen for their loved ones to go to these places,” he says.

MSF also needs to ensure that its employees are resilient enough to take on the challenges and cope with witnessing human suffering and tragedy on such a massive scale. “We can’t fall to pieces over there, although we often do when we come back,” he says.

While McMaster says MSF staff are rarely targeted, they have lost staff in some of these conflict zones. Three MSF workers were killed in the Central, African Republic last April, for example.

“In general, people are not looking to attack healthcare staff, but we have lost people. International staff are more at risk of kidnapping, but national staff working with us in these countries are more vulnerable,” he says.

Towards the end of our conversation, I ask McMaster to name the international humanitarian who has most impressed him. The response sums up this understated and modest man well.

“James,” he replies. “He’s Sudanese, working in South Sudan. I have worked with him there. James is out there working in the bush. Nobody has ever heard of him, but I think what he is doing is just heroic.”

McMaster regards himself as “very privileged”. He continues: “I had a happy childhood and I had an immensely rewarding professional career. For me, when I look at what’s going on around me and think I can make a small difference, how can I not do that? How can I not?”