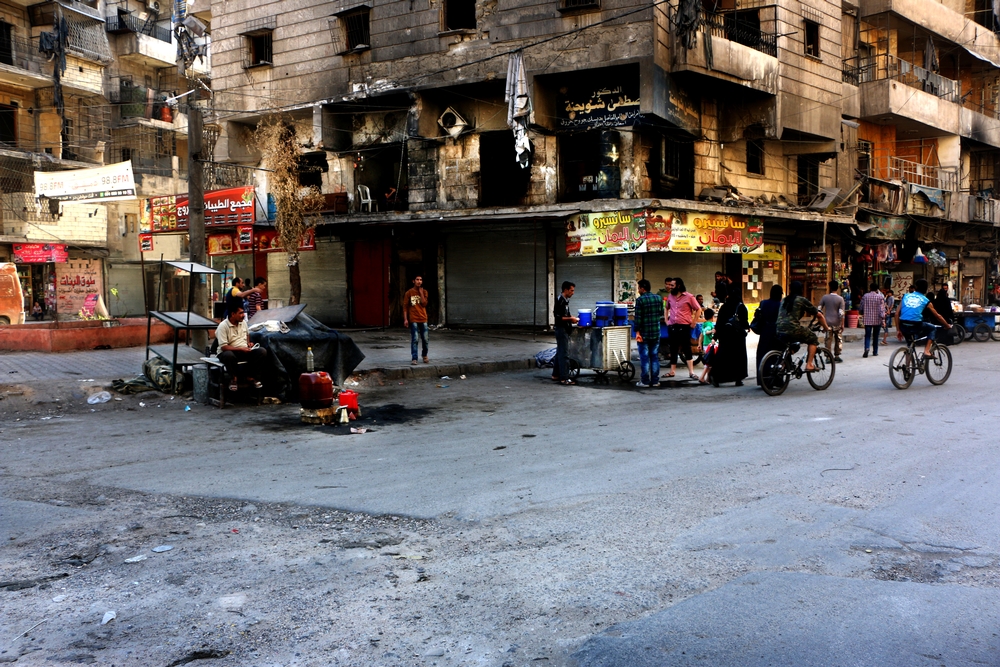 Syria: “East Aleppo is being devastated in front of us”

“They have been abandoned by the world – the whole world is witnessing the city being destroyed, but nobody is doing anything to stop it,” says MSF head of mission Carlos Francisco. “This is the feeling shared by the 35 doctors left in east Aleppo.”

Francisco has been coordinating MSF's projects in Syria since January 2015. He has witnessed how the war in Syria has deteriorated, with destruction reaching a scale not seen previously, particularly over the past three weeks in east Aleppo. Since the ceasefire broke in September, the intensity of the aerial bombing campaign waged by Syrian and Russian forces is threatening to flatten the besieged area of the city.

“Some 250,000 people are under siege, with no possibility of help or escape,” says Francisco. “First the surrounding areas were hit, then the roads leading into the city, then hospitals, water supplies, residential neighbourhoods, rescuers’ equipment. We are talking about a city exhausted by five years of war, which has received no aid since July, when the siege began – a city that is being devastated, flattened, in front of our eyes.”

Francisco is speaking from the south of Turkey. His team is in regular contact with the eight hospitals supported by MSF in east Aleppo.

In need of everything

“Before the siege began, we were sending in supplies every three months,” says Francisco, “but it still didn't cover their massive needs, not even with the help of the other partners supporting them. When the hospitals are damaged by airstrikes – and there have been 23 attacks over the past four months alone – we are in daily contact to see how they have been affected and how we can help. Now, they are basically in need of everything. They are telling us, ‘Send whatever you have – sterile gauze or non-sterile – we’ll take anything, we need everything’. But in these circumstances, we are powerless to help them.”

The east of the city has been under total siege since July, soon after the month of Ramadan ended. Some doctors had taken the opportunity to accompany their families to Turkey during Ramadan, then found themselves unable to return.

“We see them here in southern Turkey and it's very tough for them,” says Francisco. “They are in pain because they can't go back to help – they feel frustrated and impotent. Many doctors, given their economic situation, could have fled the war a long time ago to settle in Turkey or in Europe, but they chose not to. Their level of commitment – to the people, to their work, to their hospitals, to Aleppo – is admirable, even more so considering they and their families are facing death on a daily basis.”

MSF teams have been unable to travel to Aleppo and visit the hospitals supported by MSF for more than a year. “What is clear is that we have lost the capacity to help in any major way,” says Francisco. MSF has not been allowed to work in government-controlled areas since the beginning of the war, but it has been able to operate in areas under the control of the opposition, including in the rural areas north and east of Aleppo; in Maskan, between Aleppo and the Turkish border; and in Al Salamah, where it runs a hospital providing primary and secondary healthcare.

MSF has also responded to help displaced people. Some 100,000 people have been displaced from their homes by the Islamic State group pushing west and government forces pushing north into Azaz. Since the Syrian Army took Maskan and the hospital was damaged by shelling, MSF’s area of response has become more limited.

“People around Maskan also became displaced and we lost access,” says Francisco. “It's difficult to know how many displaced people there are. Some went towards Idlib, which has more camps for displaced people, but many of them are just living in fields and sleeping under trees.”

The horrors of the Syrian war

The residents of east Aleppo do not even have the option to become displaced. Instead they find themselves trapped in a city that has come to epitomise the horrors of the Syrian war, where all kinds of deadly weaponry are on display. “At the same time, we are aware of reports of the opposition attacking west Aleppo,” says Francisco, “but the capacity for destruction is so different that you just can’t compare it.”

MSF is calling for an end to the indiscriminate aerial bombing campaign of east Aleppo, for the evacuation of the wounded and sick, for humanitarian aid to be allowed in, and for the right to be upheld of civilian populations to flee crisis areas in a conflict.

East Aleppo’s 35 remaining doctors, including seven surgeons, are working as many shifts as they can across the area’s eight remaining hospitals, as they know their skills are urgently needed in all of them. “The doctors who can't go back to Aleppo, our own staff here, they all talk about the medical staff and the people of east Aleppo with the same pain,” says Francisco. “They say, ‘They suffer there, we cry here’.”