As bombing, shelling and airstrikes continue in northwest Syria, our teams are fighting to ensure health workers have the supplies they need

“The bombings of medical facilities in the area are happening all the time. The hospital that I manage is still standing, but just in the past few weeks, five facilities around us were partially or fully destroyed and went out of service.”

These are the words of a doctor managing a health facility in Idlib province, Syria, where a military offensive by the Government of Syria and its allies is still ongoing.

“We are completely overwhelmed by the number of patients. They would normally have been treated in the hospitals that have been destroyed but must now be handled by us instead."

"The hospital staff can really feel the pressure. Both physically, due to the number of patients now having to be treated in our facility, but also mentally."

“We are completely overwhelmed by the number of patients. They would normally have been treated in the hospitals that have been destroyed but must now be handled by us instead."

“We work non-stop, even until late at night, to operate on and treat all the people coming in. We see our supplies decreasing drastically, not knowing how or if we’ll manage to get more."

“We also operate in constant fear that we might be the next ones hit.”

Fleeing for their lives

Daily shelling, aerial bombing and ground offensives in southern Idlib have meant that in the space of two months (December 2019 and January 2020), nearly 390,000 people have been forced to flee from their homes or the camps they were already displaced in.

"We see our supplies decreasing drastically not knowing how or if we'll manage to get more. We  also operate in constant fear that we might be the next ones hit"

With the border with Turkey closed and the frontline of the conflict advancing, people trying to escape the violence sometimes struggle to even find a tent to stay in at overcrowded camps.

As the frontline moves, the number of wounded people keeps rising. But in recent months, a significant number of health facilities have been hit and either badly damaged or completely destroyed.

“What this means is that as the fighting continues, wounded people have less and less chances to even access health facilities,” explains Cristian Reynders, MSF project coordinator for northern Idlib. 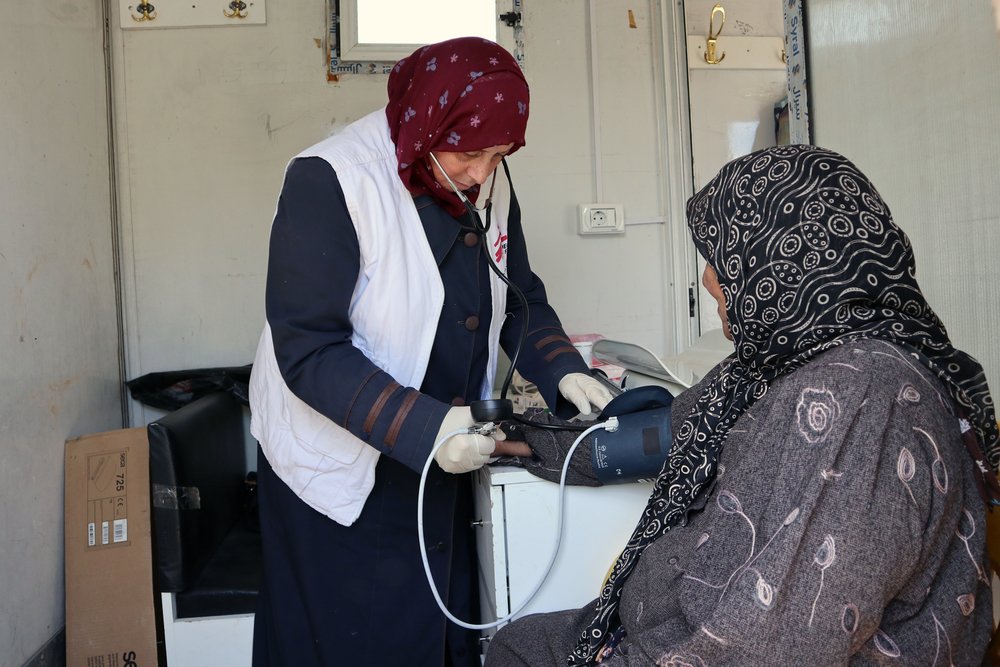 MSF
MSF mobile clinic triage nurse Umm Ahmad is checking the pressure of a woman who recently was recently displaced by the conflict in Northwest Syria.

“If people must go further to be treated, the chances that their injuries worsen or even that they die is only getting higher.”

In recent weeks, our teams have increased ad-hoc support to multiple healthcare facilities located close to the frontlines to help them cope with the situation.

“There’s a clear call for help from these health facilities and we simply can’t ignore it,” continues Reynders.

The Maarat al Numan hospital, one of the largest hospitals in southern Idlib, was recently put out of service because of bombing in the area.

On 29 January 2020, an armed opposition group stormed the Idlib Central Hospital, one of the other major health facilities in the area, to which MSF had just donated surgical and first aid kits.

For a few hours, they occupied the facility for military purposes, despite the protests of medical staff. The same night, Ariha hospital was hit by multiple airstrikes, which led to major destruction of the building and its warehouse.

Most of the hospital’s drugs, supplies, and fuel stocks were damaged or lost, and its pharmacy was destroyed. Despite this, dozens of people injured by the bombings were rushed into the facility for treatment.

These incursions into and bombings of health facilities and the overall obstruction of healthcare come at a time when lifesaving medical care in Idlib is needed most.

MSF strongly condemns the blatant violations of international humanitarian law in the destruction of medical facilities or their use for military purposes.

We are supporting other health facilities and have put together an emergency medical stock for 50 surgeries, the management of 300 emergency cases and 1000 consultations in the coming weeks.

Meanwhile, our teams continue to assess the situation in the northern area of Idlib, where tens of thousands of people have settled and currently live in terrible conditions.

“What we witness here now is like a human tsunami,” says the hospital director. “People are all trying to flee up north, towards the Turkish border, as fast as they can.”

“For the medical staff, the choice is even harder to make in the face of this situation: do we stay to treat the sick and injured, or do we flee as well? My family left a few days ago and I decided to stay behind for now. But I haven’t heard from them since then and I am incredibly worried. It feels like we’re living through a series of impossible choices.”

MSF has increased assistance to newly displaced families through the provision of drinkable water in camps and essential items such as blankets and heating supplies, but the needs are tremendous and only increasing.