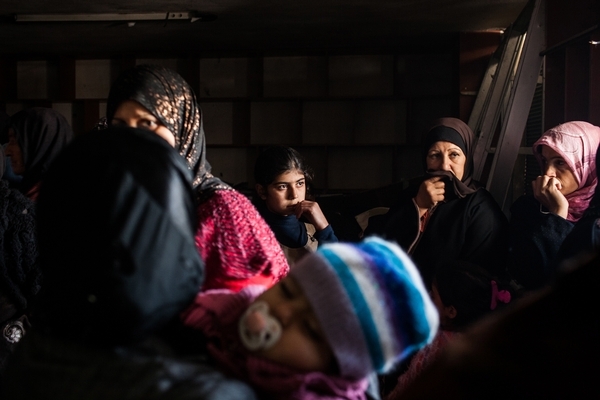 MSF Psychologist Audrey Magis has just returned from spending two months working in Syria. Her role was to set up and run a mental health programme in one of MSF’s projects in the north of the country.

Audrey previously worked for MSF in Gaza, in Libya and in a camp for Syrian refugees. Here she explains how the war has affected people and what MSF is doing to help.

In most places I have worked, people are rather hesitant when I tell them that I am a psychologist. But in Syria, it was quite the opposite. People actually came and told me they needed my services.

The war has been raging for two years and people have completely lost their bearings. At first they would come and tell me about their social problems at home; children are not going to school and so become disruptive, adults are not working, people are living in tents or ten-up crowded into one room.

But when you dig a little, you quickly find that most have experienced deeply traumatic events. Some have lost friends or family, some have seen their home destroyed, some have lived through bombing raids.

People have lost their identity. Older men cannot find their place in society and in the family: they have lost their job, or have stopped being a fighter, maybe they have responsibility for a family but they have had to move house several times in quick succession.

I don’t have to find them; they come and ask for help saying things like “I’m starting to be violent towards my wife and children. Please help me, I cannot be like that.”

I have seen many women who are finding it increasingly hard to form a bond with their children. There are few contraceptives available, and a lot of women are becoming pregnant without really wanting to.

They struggle to imagine their future with their child. I met several women in the final term of pregnancy who had nothing prepared; no cot, no baby clothes, no ideas for a name. People have lost their ability to project their lives into the future.

All the children are playing at war. You don’t see them playing with cars or other normal games; they pretend to shoot each other. I’ve seen kids throwing stones at donkeys, hurting animals.

This is their way of expressing the pent up anger. In fact, this is a relatively functional way for them to release some of their aggression. I have also seen young men in their twenties, ex-fighters who have come to me with complaints about depression, traumatic stress, flash-backs, nightmares.

Unknown Expat/MSF
A number of people have quietly told me that they no longer know what the war is about. They are terrified at the idea that they are fighting their neighbours, their friends and they don’t know why anymore.

At first there seemed to be some purpose, but two years on that’s all gone. They just want it all to end so they can go home.

Things have gone way beyond breaking point. People are on autopilot. But somehow they manage hold it all together.

They cannot allow themselves fall apart. They have developed an amazing ability to cope and keep going. To survive two years living through this, it’s impressive. The family and community support is enormous.

Sometimes just one session is enough. Some people just need to hear that what’s happening to them is normal, that they are not going mad.

But there are other patients who I had to work with for longer. The idea is to set a clear objective with them, and to get there step by step with behavioral therapy. There is no time for long analysis sessions, but you can do very sound psychological work with these short-form therapy techniques.

A child born of war

I remember one patient, a woman who was six months pregnant. She came to the hospital asking for a premature delivery. There was no medical reason; she just wanted us to do a C-section and deliver her baby as soon as possible. She was very jumpy, very agitated.

I sat with her and we worked out that this was one baby too many, a child born of the war, and she felt that the baby was sapping all her energy. All she wanted was to take anti-depressants, but she couldn’t because she was pregnant.

We worked out a plan of relaxation exercises. And we made a diary where she would write down when she felt tense and what had happened to cause the tension. And a few sessions later we moved on to preparing for the arrival of her baby.

At our last session she showed me the baby clothes for her soon-to-be-born baby. She hadn’t yet chosen a name, but she had made great strides and was ready. She was my last patient, my last session on my last day. I left the project with the sense that my time had been well spent.

MSF teams are running four hospitals inside Syria and to date have carried out 1,794 surgeries, 32,784 consultations and delivered 499 babies.  In the neighbouring countries of Lebanon, Jordan, and Iraq which are hosting 1.3 million Syrian refugees, MSF teams have carried out 110,019 consultations, vaccinated 31,000 people against measles, and are providing post-operative rehabilitative care to 2,517 patients.