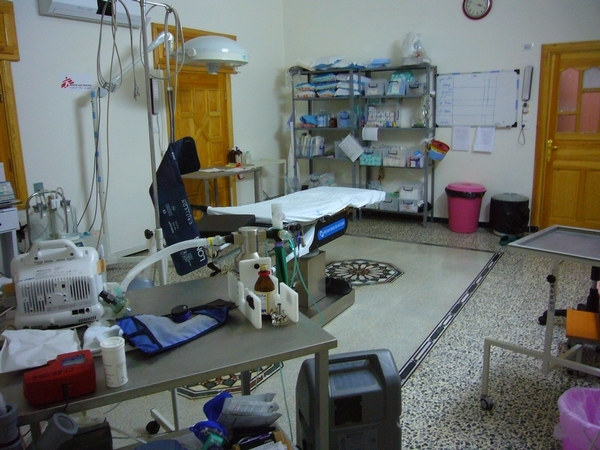 The international medical organisation Médecins Sans Frontières/Doctors Without Borders (MSF) is increasing its medical activities to help victims of the conflict in Syria. MSF is providing emergency and surgical treatment for the wounded, as well as medical care for people displaced from their homes within Syria and for refugees who have escaped to neighbouring countries.

A makeshift operating theatre in an MSF hospital in Syria. Syria 2012 © MSF
An operating theatre set up in a converted house. Since June of this year, MSF teams have treated over 2,500 patients and performed 550 surgical procedures. Given the scale and range of needs, MSF
Inside Syria, MSF teams are striving to meet the needs of people caught up in the conflict, but restrictions and insecurity prevent us from extending our work and gaining an overview of the humanitarian and medical needs in all the regions affected by the conflict.

Treating the wounded in Syria

Over the past four months, MSF has been able to open four hospitals in northern Syria, in areas controlled by armed opposition groups. In these hospitals, MSF teams are providing emergency medical treatment including surgery.

Since the end of June 2012, our teams have treated more than 2,500 patients and carried out around 550 surgical procedures. Many of these were for violence-related injuries including gunshot wounds, shrapnel wounds, open fractures and injuries due to explosions. Patients have included women and children, as well as combatants from several opposition groups and from government forces. As the conflict has evolved, the hospitals’ activities have fluctuated according to people’s ability to access health facilities.

Fighting has also led to people in conflict zones being displaced from their homes. In one of the Syrian areas where MSF works, the population has significantly increased in just a few months and has now reached 30,000. Many of the displaced families are sheltering in schools and public buildings. On one site, MSF is providing clean water and further relief activities are being evaluated.

In response to the increasing medical needs in Syria and a lack of medical supplies, MSF has donated tons of medical and relief items to field hospitals and clinics in Homs, Idlib, Hama and Deraa governorates and to the Syrian Red Crescent in Damascus.

MSF is also treating victims of violence from Syria in its surgical programme in Amman, Jordan, which initially opened in 2006 to treat victims of the war in Iraq.

Over the past four months, some 45 percent of new patients admitted to the surgical hospital have been Syrians. Between June 2011 and September 2012, 289 Syrian patients were admitted, half of whom underwent surgery. Psychological counselling and free accommodation are also provided for patients undergoing treatment. Meanwhile, MSF medical liaison officers have been visiting Jordan’s Zaatari refugee camp, which hosts 30,000 Syrians, to identify wounded refugees in need of surgery.

As the crisis in Syria intensifies, thousands of people are seeking refuge in neighbouring countries. MSF is providing basic healthcare and carrying out mental health consultations for Syrian refugees arriving in Iraq, Jordan, Lebanon and Turkey.

Most Syrian refugees entering Lebanon have settled in the northern city of Tripoli. MSF is providing medical assistance in Tripoli, as well as in the Bekaa valley, the main crossing-point into Lebanon for people fleeing Syria. To date, MSF teams have carried out more than 11,600 medical consultations and more than 1,700 individual psychological consultations.

In Iraq, MSF is the main healthcare provider in Domeez refugee camp, in the north, where more than 15,000 people have settled. Since last May, MSF medical teams have held over 20,500 consultations.

In Turkey, MSF has been working in Kilis, bordering Syria, and in the capital, Istanbul, providing mental health support to civilians fleeing the conflict.

MSF remains committed to assisting all victims of the conflict and will continue to expand its activities in Syria and surrounding countries.