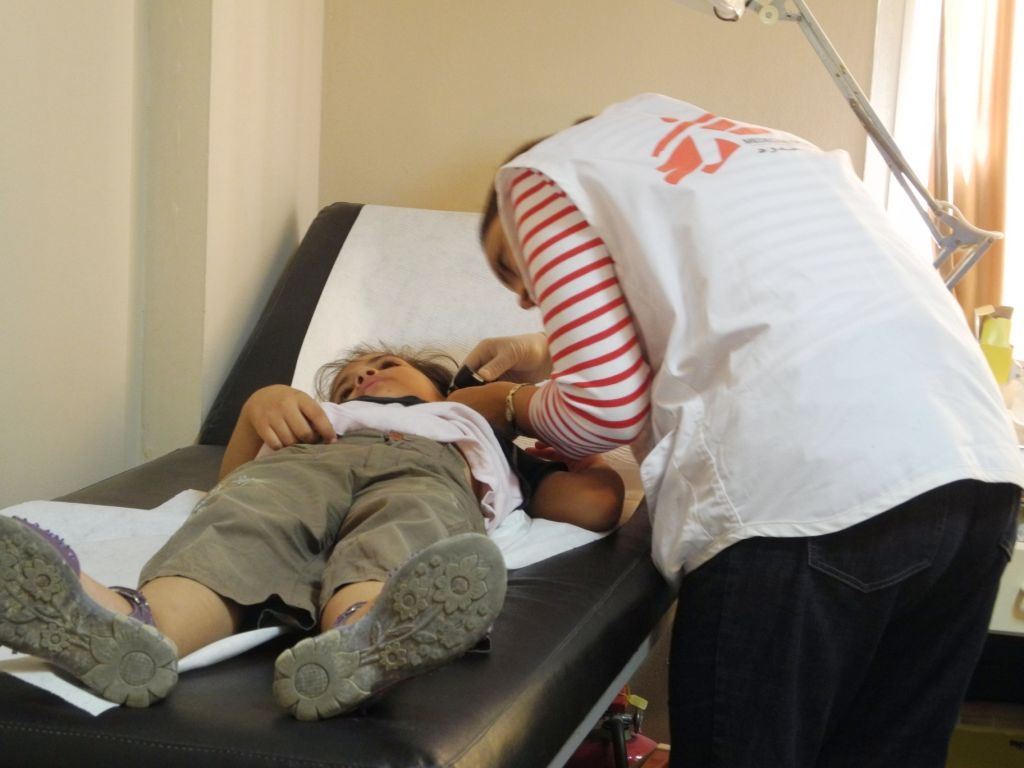 Dr Aoife Doran currently on a six-month posting with Médecins Sans Frontières in Lebanon, just 31km from the Syrian borderreflects on how quickly she has become absorbed in her new life.

When I take a minute to reflect, it’s quite overwhelming how much has changed since I last wrote.

Astounding how fast time moves and how quickly things change and evolve when you’re working in the field with MSF.

I'm certain that anyone with field experience knows exactly what I mean by this. You become absorbed into a completely parallel life, bearing almost no similarity to the one you once knew. Typical life at home becomes a figment of your distant memory, and things which first surprised and astonished you on arrival become. All of this within a matter of weeks.

It's enough to completely disorientate a person. I imagine things could have been a lot tougher if it wasn't for the wonderful national staff here in MSF Tripoli. Their efforts to expedite my integration and assimilation into local culture have been instrumental in my survival.

This has included information bites about the Arabic language, regional politics and religion, local geography, and even the local flora! They are rightly proud of their country and its resources, and have been eager to teach me all about it.

Now that I've gotten into the swing of things here, I'd like to tell you more about the work we are doing. Here in Tripoli, we have four sites from which we treat our patients. We have three primary healthcare clinics in the project, and we also work in the governmental hospital, where we run mental health services as well as an emergency preparedness programme. We cater to the needs of Syrian refugees and the vulnerable Lebanese.

Dar Al Zahraa (or DAZ, as we call it) is a hospital located in an area called Abu Samra. This neighbourhood was once covered in green pastures. It is now an urban conurbation of high-rise apartment blocks, absorbing the overspill of the ever-sprawling city of Tripoli.

Housing conditions and sanitation are very poor here. There is massive overcrowding and infrastructure is lacking. Syrian refugees have continued to arrive in their masses to Abu Samra since the conflict began in Syria more than two years ago. They come here for the low rent prices, but a peril of this affordability are the hazardous environmental conditions they endure.

MSF opened its doors to Syrian refugees in DAZ in February 2012. A primary healthcare clinic was set up on the ground floor of the facility, and it has continued to buzz with activity every day since. A dedicated team of nurses and doctors provide quality medical care to about 60 patients per day, and the clinic is open six days a week.

Of particular importance, MSF in DAZ provides something that is unique to all other healthcare facilities in this region of Lebanon: free and comprehensive medical care to Syrian refugees who suffer from chronic diseases.  This includes diabetes, cardiovascular disease and hypertension, and these degenerative diseases affect a huge number of Syrian refugees.

Offering chronic disease care is a major factor driving the inexorable flock of patients to DAZ from Tripoli and the surrounding hinterlands. They share transport and in some cases arrive from up to 80km away.When they arrive, they are eager to see an experienced doctor who can help them tackle their symptoms and gain control over their conditions, which have been neglected for some time.

Neglecting their high blood pressure or their poor sugar control is often an inevitable consequence of the circumstances facing refugees. They have endured extreme physical and emotional stress since the war began. They have also fallen victim to huge drug shortages, both in Syria and here in Lebanon, where medicines are often unaffordable, as they are much more expensive than in their home country.

A few miles away from DAZ, also on the outskirts of Tripoli, Tripoli Governmental Hospital (TGH) hosts hundreds of acutely ill patients. Most of the patients are from the local vulnerable Lebanese population.

TGH is also the main destination point for Syrian refugees in Tripoli who require acute hospital care. MSF offers strong support for the activities here. An MSF expat doctor has implemented an emergency programme, and he continues to train TGH staff to improve their capacity to cater for the ever-increasing influx of Lebanese and Syrian people who present there in need of urgent medical care.

MSF has also set up a very successful mental health project to be taken over by TGH. Our team comprises of a psychiatrist, a psychologist and a social worker. They receive adult patients referred from our other primary healthcare clinics, as well as other non-MSF clinics in Tripoli. They assess and provide treatment for people with various mental disorders (such as depression, anxiety and psychosis).

The patients-whether they are Lebanese, Syrians or Palestinians- invariably have huge psychological stressors. The Syrian refugees have lived through the brutal ongoing civil war and lost many of their loved ones in tragic, violent circumstances. There are many cases of anxiety with symptoms like insomnia, and even cases of post-traumatic stress disorder.

The effect of war is manifest in children also. Parents report symptoms of bed-wetting, mutism and conduct disorders in this most vulnerable group. MSF provides medication, psychotherapy and social support to these patients.

Major challenges exist, however. There is a huge stigma surrounding mental health in the Syrian refugee population and generally in Lebanon. People can be reluctant to seek and accept help. Many have no knowledge about what mental illness is and do not recognise the signs.

Another challenge is the phenomena of somatisation and conversion disorders. People report numerous physical complains (such as nausea, dizziness and joint pains) or loss of power in one limb. When the story is teased out further, it becomes evident that their symptoms are a physical manifestation of their psychological distress.

Explaining these conditions, and putting in place effective treatment plans, pose huge challenges to the team. But their efforts pay off and we are seeing positive results. Patients are engaging in treatment, attending consultations regularly and benefiting from the care they are receiving. It really is incredibly satisfying and inspiring to see their progress.

Our patients are an eclectic profile. Some are traditionally dressed and come from rural parts of Syria. These include the Bedouin people, who often have facial tattooing and traditional dress. Many women wear the burka. Some people are clothed in typical modern-day European/American attire of jeans and T-shirt. These people are generally from the cities such as Homs, Damascus and Aleppo.

Despite their aesthetic differences, they have something in common- they have all lost everything they owned. They have all witnessed horrendous tragedy and acts of violence. They are all mourning the deaths of loved ones. And what is worse, they are living in fear about the fate of loved ones who are unaccounted for, left behind in Syria.

As time goes on, I am getting a clearer picture of what the healthcare needs are in the populations we serve here. All our projects continue to grow and evolve, and the work shows no signs of abating as Syrians continue to arrive in Lebanon in dire circumstances, and with massive healthcare needs. More than 460,000 Syrians are now registered or awaiting registration with the UN Refugee Agency, for a total Lebanese population of four million.

The most worrying facts are that UN aid for the Syrian refugees in Lebanon, and aid from other international NGOs, is being reduced and in some cases it is halted entirely. People are desperate and in dire need.

Working as part of MSF here in Tripoli, every day we are made aware of our own limitations regarding the care we can provide to Syrian refugees. We see the ever-increasing and huge needs that surround us, and we are reminded that what we are doing remains a drop in the ocean compared to the extent of intervention that is required for the health of Syrian refugees.

Summer is upon us now, and the last of the snow has melted from the tips of Mount Lebanon. Temperatures are rising, the sun is shining brightly. But as a fair, freckled Irish person, I must admit I live in apprehension of the soaring temperatures to come.