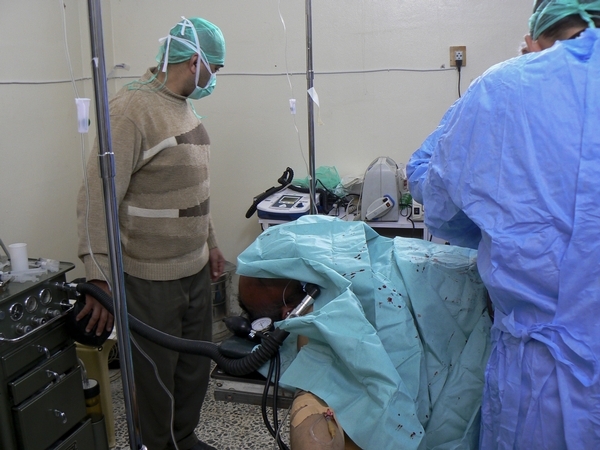 Syria: Safety of Wounded and Medical Workers must be prioritised

MSF has been seeking official authorization for several months to work with medical personnel in the Syrian governorates most affected by violence. To date, none of our efforts, either directly with Syrian authorities or via various intermediaries, have succeeded.

Nonetheless, after reaching Homs, MSF managed to enter Idlib Governorate where the medical teams found patients and doctors at risk of attack and arrest.

“The atmosphere in most medical facilities is extremely tense; healthcare workers send wounded patients home and provide only first aid so that facilities can be evacuated quickly in the event of a military operation.”

"A number of Syrian colleagues are reported to be missing," said Marie-Noëlle Rodrigue, MSF’s director of operations in Paris.

"The authorities and all parties to the conflict must ensure that medical workers can operate without fear of retribution and that wounded people can safely seek and receive immediate life-saving care, without resorting to inadequate improvised clinics for fear of arrest, or worse.”

While MSF has only a partial view of the medical situation inside Syria due to the lack of authorization to work in the country, the information obtained by MSF in Idlib is consistent with what it witnessed in Homs.

“We saw militarised healthcare facilities, meaning that access to medical care depends on which side you belong,” said Brice de le Vingne, MSF’s director of operations in Brussels.

During its short time in the Idlib area, the MSF team was able to perform some emergency medical work.

"In one public hospital we worked as hard as we could for three days straight," recounted an MSF surgeon. "We operated on 15 wounded people and then had to pack everything up in 10 minutes after being notified of an imminent attack. Elsewhere in the Idlib region, an operating room was closed because it was simply too dangerous to perform surgery on wounded patients,” he said.

“Or doctors were threatened, and they discouraged us from setting up a medical facility because the situation was so risky,” adding that another hospital had been destroyed.

“You can see medical equipment and supplies,” the surgeon recounted. “Sometimes the resources and the infrastructure are there, but the fear and the risks of capture are so great that doctors hesitate to treat patients.”

Still without official authorisation to operate inside Syria, MSF continues to support networks of Syrian doctors in Homs, Derah, Hama, Damascus and Idlib, delivering supplies and medicines from neighbouring countries. MSF also treats those who were wounded or tortured in Syria at a surgical hospital in Amman, Jordan. Additionally, MSF is providing primary health care and psychological support to Syrian refugees in Lebanon.

MSF reiterates its call for authorisation to work inside Syria.  The organisation stands ready to quickly mobilize its medical and surgical teams, and is determined to operate independently, providing care to anyone requiring it.

Despite the lack of effective ceasefire or sustainable political solution, all parties to the conflict must fully respect the physical integrity of wounded persons, doctors, and healthcare facilities, MSF said. MSF calls for increased political and diplomatic efforts to ensure the safety of patients and medical workers, without the use of force.

MSF first reported in early February on the abuse of health facilities and the targeting of patients and medical workers.