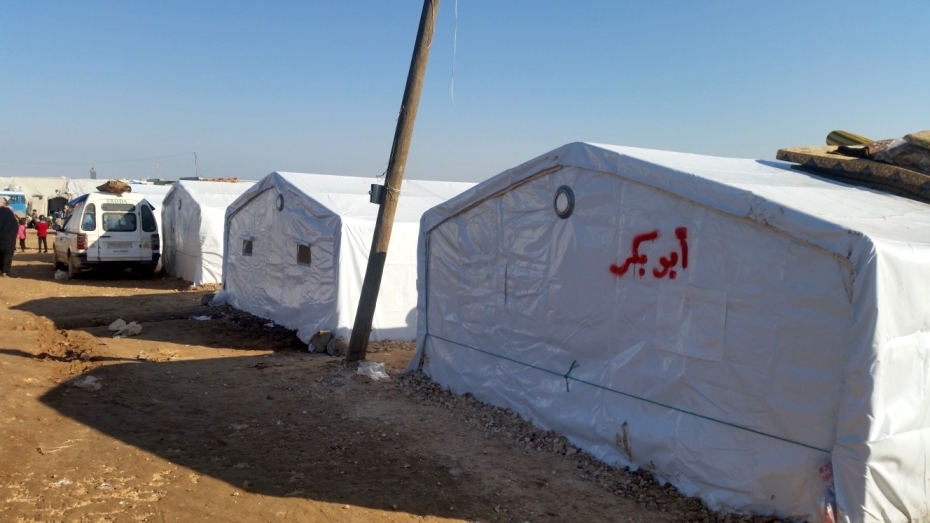 Syria: "So close to the frontlines, these people might be in danger"

Interview with Muskilda Zancada, MSF head of mission in Syria on the situation on the ground:

In Syria, tens of thousands of people are fleeing towards the Turkish-Syria border areas in search of safety as escalating fighting in the Azaz district in eastern Aleppo, forces people from their homes.

MSF has counted 23,000 new arrivals in camps and surrounding areas as people have fled north towards the border with Turkey in search of safety. The numbers are hard to keep track of though as people move all the time, not just new arrivals but also between camps and around.

In one border, around Bab al Salamah, there are around 79,000 people a mix of new arrivals and "old" - people previously displaced and already living in camps.

The teams have also distributed tents and kits of essential items to displaced families, and can cover the needs in terms of shelter and non-food items for up to 18,000 individuals in the coming days. They are assessing the needs on an ongoing basis and positioning ourselves to respond to further movements of people.

What are the MSF teams on the ground seeing?

Lack of shelter is a major issue. There are pre-existing camps for Internally Displaced People (IDPs) but these existing camps are already full to capacity.  Families are arriving on the outskirts of the camps and other families are scattered.

MSF’s rapid response teams are distributing essential aid items, so far distributing tents and other essential items to more than 700 families. MSF is particularly worried about people living outside of the camps who have received almost no assistance, in particular, they have no formal access to food distributions.

MSF
Before the most recent increase in fighting in Azaz, Bab Al Noor camp, near Syria’s border with Turkey, was home to around 14,000 people. Another 1,300 people have arrived in the camp in the in the second week of February. MSF has donated around 50 large family tents for the recently arrived people in the camps and is looking at how to improve water and sanitation.

As numerous hospitals near the front lines also close due to the insecurity, MSF has increased the bed capacity in its hospital in Azaz district from 28 to 36 beds, and is preparing to further extend the hospital capacity if necessary.

Since Saturday, we have seen a 50% increase in our outpatient department, the majority of patients were suffering with respiratory tract infections.

There are also other health facilities in the camps. We have started outreach activities from this hospital, going into areas where the IDPs are gathering to assist those who can´t travel long distances. We are also running medical assessments.

We have also identified water and sanitation as a potential need. With the sharp increase of people around the camps, there are not enough toilets and showers so we are looking at how we will support this.

We are also worried about the potential for disease outbreaks, particularly of measles – and even with the cold weather we cannot discount the risk of cholera.

Who or what is forcing these people to flee? How many people are on the move? Where are they going?

We cannot say how many people are fleeing: it changes every day – so far our teams have counted 23,000 new arrivals in the camps and surrounding areas.

Many of these people have been uprooted again and again because the front lines are moving, and some are on the run because of the constant air raids.

We are concerned that with fighting on many front lines, and with some of these camps so close to those front lines, these people – families with pregnant women, children, elderly people – might be in danger. We have heard reports in other parts of northern Syria about aerial attacks on camps, and we are very concerned that this may happen here.

What kind of assistance is available to people?

There are existing health structures in some of the camps, but not enough. Other international NGOs are responding, mostly inside the camps, but from what we understand they have short term plans. Issues such as food, water and sanitation have not been addressed yet in a systematic way.

Three of the hospitals that MSF supports have been hit recently. Were these attacks been deliberate?

In the last week alone, three hospitals MSF supports with donations have been hit by bombs. Because of the insecurity, the Syrian medical teams we support have not been able to get back into these facilities to assess the damage. There were no casualties in these bombings, as far as we know.

One of the hospitals was an ex-MSF hospital handed over in June to a Syrian medical association, but we continued our support with donations of medical equipment and drugs.

Between January and June 2015, the hospital treated nearly 6,000 patients in the outpatient department, and about 2,500 in the emergency room. Fifty one babies were delivered there.

As for whether these attacks were deliberate, we do not have enough information to say at this stage. We can confirm, however, that the hospitals were hit by bombs. We also know that in Syria, hospitals and healthcare structures are regularly targeted: a disturbing trend that escalated in 2015.

So far this year 13 hospitals have been bombed in north and south Syria, including 4 supported by MSF.