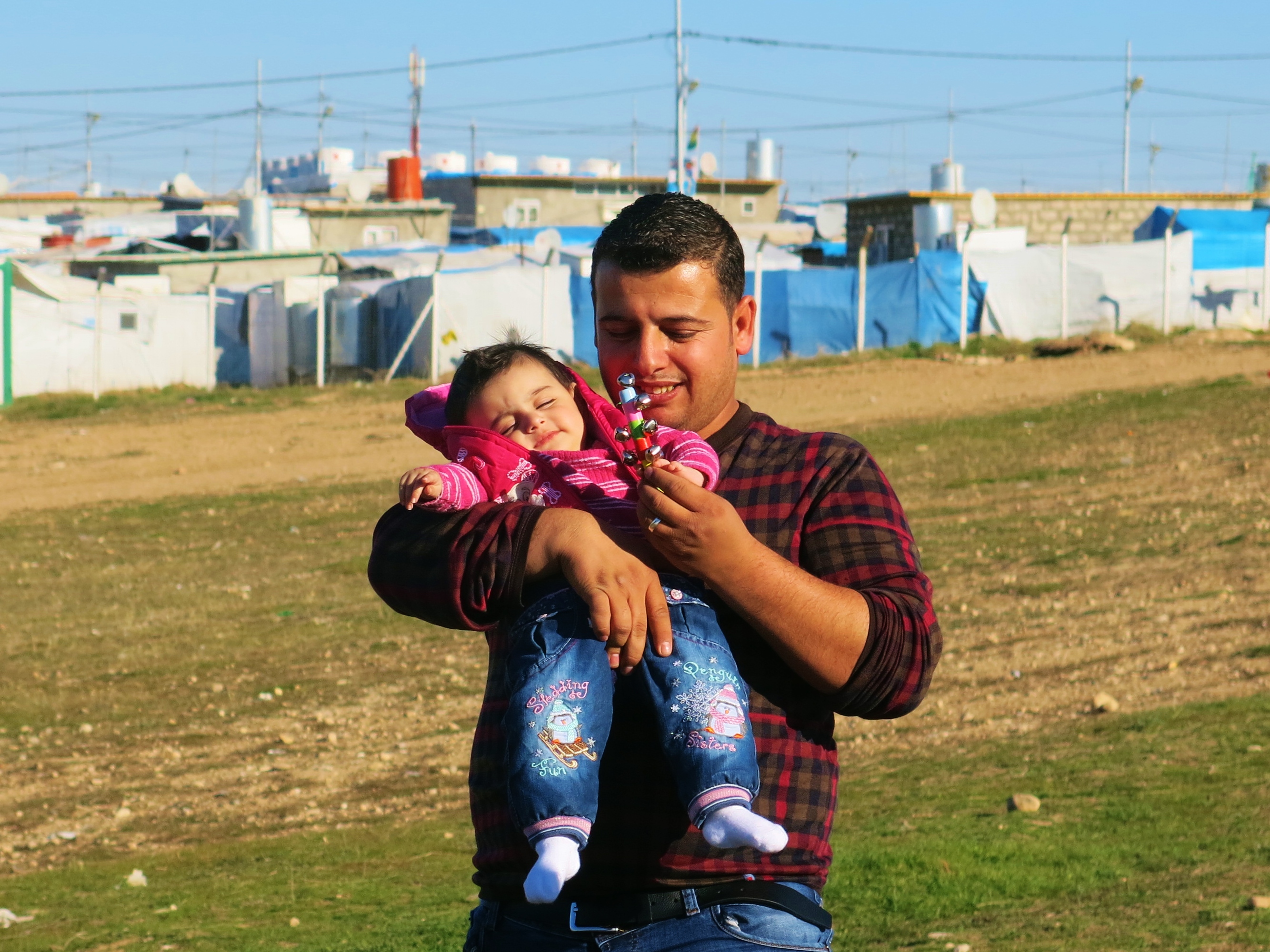 Syrian crisis: “My story could easily be the plot of a movie”

Suar absconded from military service in Syria and made a run for Iraqi Kurdistan, a journey that involved people smugglers, minefields and the loss of his most precious possessions.

Now settled in Domeez camp, where he works for MSF as a nurse, Suar is upbeat about the opportunities afforded him by life as a refugee.

Things in Deraa were getting rough and I didn’t like the turn they were taking. As rebel groups started to multiply, soldiers were increasingly being deployed at dangerous checkpoints; others were being sent to search the houses of suspects, breaking down doors in the middle of the night, regardless of whether or not there were women in the place.

They became involved in shameful acts such as theft, looting and harassment. I didn’t want any part in this. Armed with a Syrian military laissez-passer, and still without civilian identity documents, I made my way to Damascus.

I was terrified of being stopped by a rebel group at one of the many checkpoints along the way and being exposed as a soldier. My only hope was not to be asked for my documents at all. So I picked a coach that was full of passengers and prayed for a seat next to the driver. I got my wish. Security officers checking documents assumed I was the driver’s assistant and moved on.

My journey to Syrian Kurdistan

In Damascus I found a bus company to arrange for my journey to Syrian Kurdistan. I explained my predicament and the manager arranged for me to travel with other Kurds on a bus that took back roads. The journey took 24 hours.

The bus drivers used cell phones to warn each other of dangers along the way and suggest alternative routes. There was a secret hatch I could have hidden inside in an emergency, but we were lucky, and I made it home without incident.

A few days after I arrived home, I got a call from the base telling me that the depot had been broken into, arms had been stolen, and some soldiers had joined the rebels. That was the final straw. Not keen on facing the inevitable investigation, I decided I would make a run for it.

Gabriella Bianchi/MSF
Domeez refugee camp has undergone many changes since it was established in 2012 however living conditions remain difficult. Residents complain of ongoing power cuts and lack of water which is particularly problematic during the hot summers. With power only available a few hours a day people are increasingly relying on small and noisy generators to provide basic electricity and lighting.

An uncle put me in touch with some people smugglers. On the day I was to leave, there was an incident, and suddenly the security on both sides of the border was raised. I hid with six other people in a house for days, waiting for the turmoil to die down.

As far as all the armed parties were concerned, we were serviceable fighters dodging our duty. Deserters.

Eventually we made a move, first to one village, then another. We paid the equivalent of US$500 and were escorted through three checkpoints. Then we were told to walk the last mile alone in the dark.

Suddenly we were spotted by three gunmen on motorbikes. They called out to us to stop, then started shooting. I threw myself to the ground, as I‘d been taught in the army, and waited. My friends kept on running and nearly got killed.

When the gunfire died down, I scrambled to my feet but forgot to pick up the bag that contained all my most valuable possessions: my degree certificates, a change of clothes and a cell phone.

We made it to the fortress under Iraqi control. The Iraqis questioned us, took down our details and asked us to wait while they checked with headquarters in Baghdad. But a friendly officer approached and warned us that we risked being deported back to Syria. He advised us to run to the post further on.

"My future depended on the documents I was carrying"

It was then I remembered my bag. My future depended on the documents I was carrying – I couldn’t leave without them. My friend offered to go and find the bag and headed off into a field, only to discover that it was a minefield. We had to call the friendly officer again to come and rescue him.

Eventually we reached the post, still without my bag, and started the registration process. They called someone at the fortress who agreed to go and rescue the bag for me – at a price. I had to bargain hard, but in the end I got my precious belongings back.

Later that day I crossed into Iraqi Kurdistan. My clothes were in tatters, the cuts and bruises I had suffered took two months to heal, but I was safe and alive.

When I first arrived at Domeez camp, there were fewer than 100 tents. By then my family had also joined me, and Domeez was the obvious place to apply for refugee status. I started asking around for work and, by chance, three weeks later, I bumped into an MSF international staff member who spoke Arabic. I brought my documents to the interview and was hired on the spot thanks to my medical background.

But my parents were still not happy with me. They kept on nagging at me to marry. In the past I had always refused, on account of my studies, and now I was busy with work and starting a new life, I didn’t want to think about taking a wife.

And yet my parents were relentless. Shortly after, my father announced that I was officially engaged to the daughter of our neighbours. It was the best thing that ever happened to me.

Now we have a child and have moved into our own tent. Life in the camp isn’t always easy; we have power cuts six hours a day and there is a lot of dust, but we have work inside and outside the camp, we have dignity.

I am thankful for everything that happened to me, but mostly that I married a good woman and that I have a great job. Suddenly everything, all our painfully reconstructed life, started to unravel.

My daughter Helma, who is now eight months old, has developed health problems. I am a specialist resuscitation nurse – I can tell when something is seriously wrong. She has been having seizures, but it’s not clear why, and none of the treatment has worked. As her father, I must find her the best medical care.

If I had a passport, I would leave immediately and take her to the best hospital in Germany, where I know my daughter would get the right treatment. But I am refugee, without a passport. I am trapped and I can go nowhere. My wife doesn’t have a passport either – in fact, like many Syrian Kurds, she doesn’t even have a Syrian ID card.

I don’t want to travel illegally with my daughter – it would be too dangerous for such a sick child.  I’ve done it myself, so I know how dangerous it can be to cross borders illegally. The only route possible is to apply through the UN for medical treatment abroad, but it takes time and there are many other refugees in the same situation as us.